We have sung the praises of Cook’s Illustrated and their cookbooks before, and we consult them for recipes all the time.  Since this winter in Dallas has been much, much colder than usual, we were in the mood for a hearty soup for dinner.   We found the perfect recipe in Cook’s Illustrated’s “Soups & Stews.”    I actually cooked this one on my own, and it was really easy.  Really.  I don’t like to cook by myself and am easily intimidated by complex (to me) recipes.  But this one had relatively few ingredients and steps, so I decided to give it a shot. 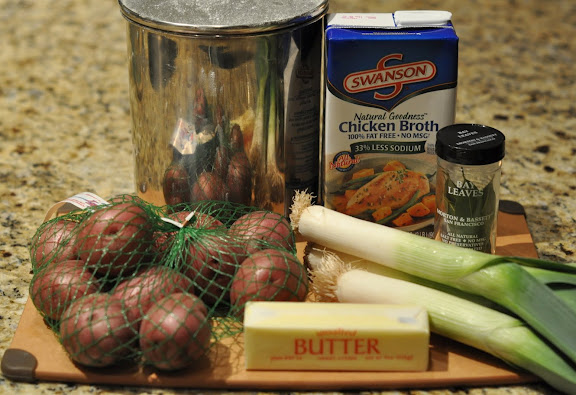 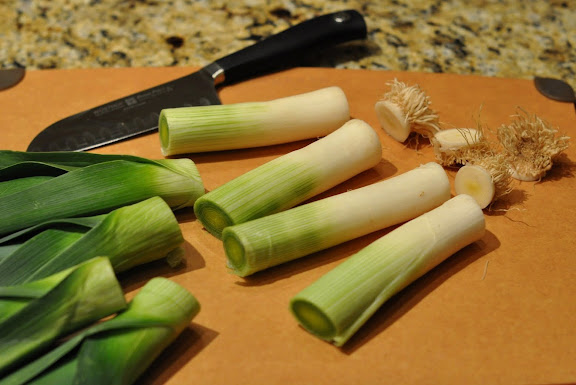 We halved the recipe, so we used 2 big bundles of leeks.  Once they are all washed and chopped up, there should be about 10 cups total.  Start by cutting off the tops and the dark green portions of each leek, leaving about 3 inches of each light green portion. 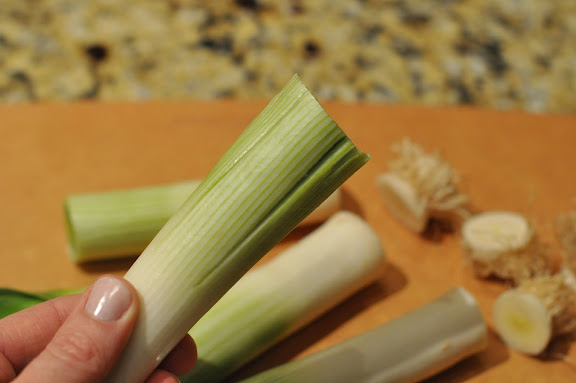 To clean the leeks, first slice into the light green portion lengthwise in 4 places around each leek. 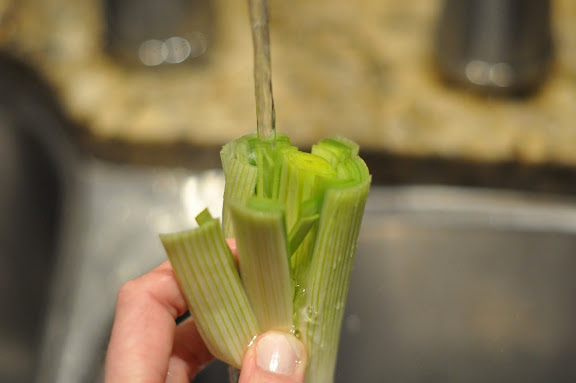 Then separate the pieces and rinse with cold water. 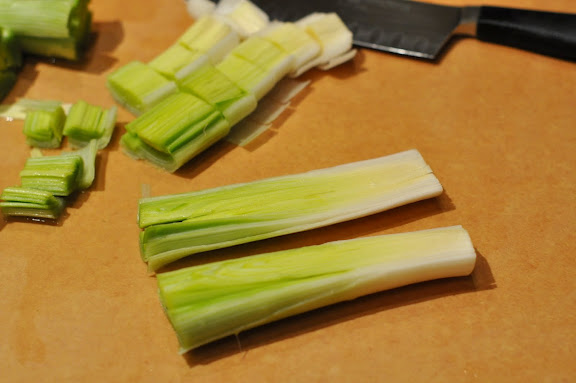 Cut the leeks in half lengthwise, then chop them into 1 inch pieces. 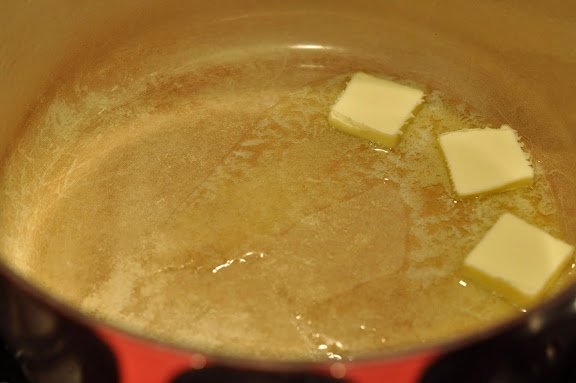 Heat about 3 tablespoons of butter in a Dutch oven over medium-low heat until the butter looks foamy. 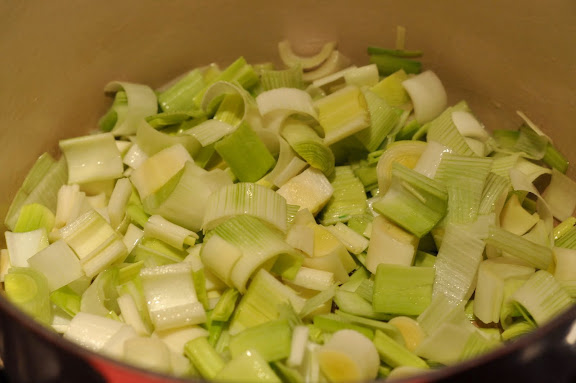 Then stir in the leeks and increase the heat to medium.  Cover the Dutch oven and cook the leeks until they are tender, but not browned – about 15-20 minutes. 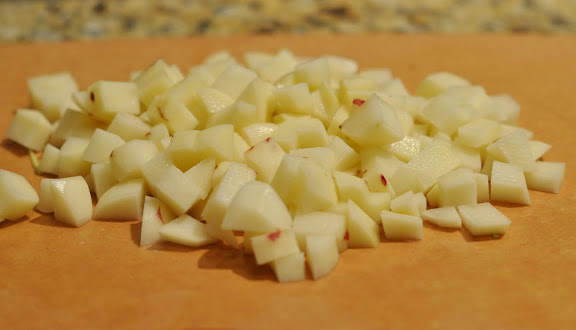 While the leeks cook, peel and cut the potatoes into 1/4 inch diced pieces.  We used about 3 medium-sized red potatoes. 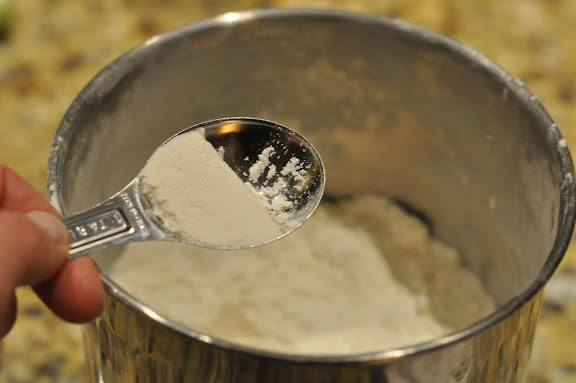 Cutting the recipe in half called for a half-tablespoon of flour.  Those measuring spoons that come in the set don’t have a half tablespoon for some reason, so I improvised. 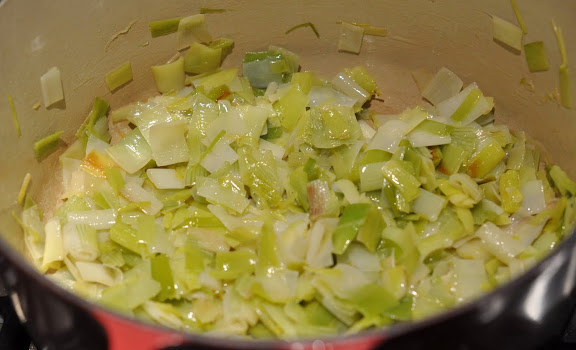 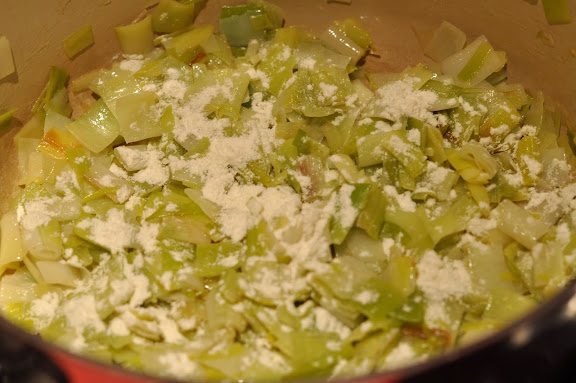 Sprinkle the flour over the leeks and stir to coat them evenly.  Cook the leeks for about 2 more minutes, until the flour dissolves. 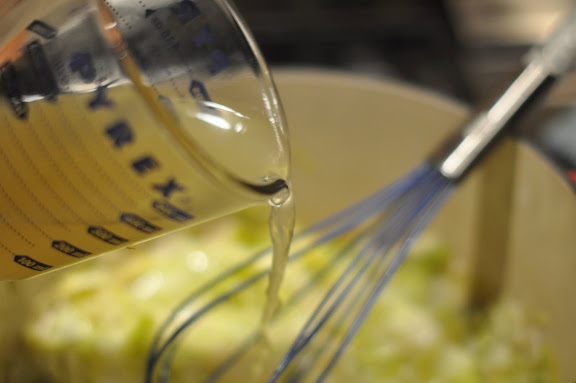 Increase the heat to high, then add about 3 cups of chicken broth, whisking constantly while gradually pouring in the broth.  (Incidentally, this is impossible to do with only 2 hands while also taking photographs.) 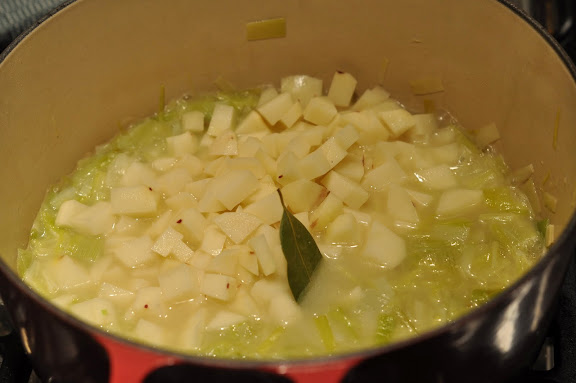 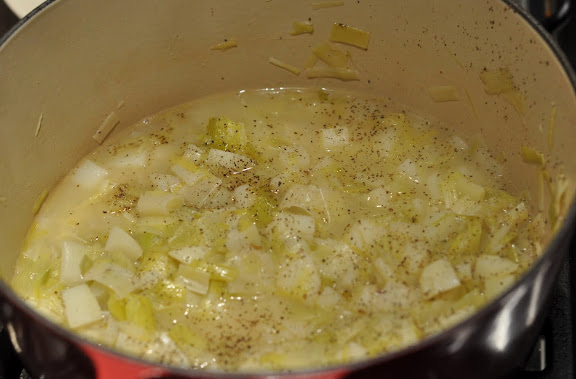 I’ll admit that I was skeptical whether the potatoes would really cook through this way, but they did.  Season with salt and pepper. 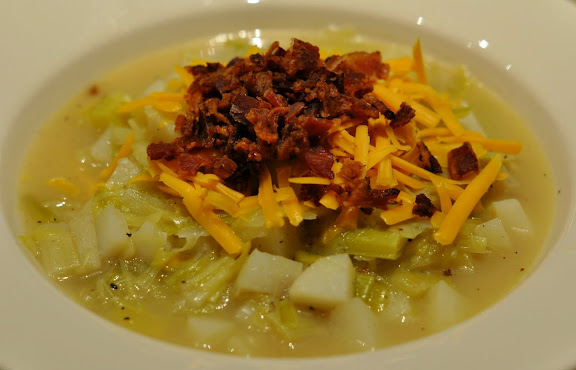 We garnished our soup with some crumbled bacon and cheddar cheese.  Delicious!  And unbelievably easy.  Really – if I can successfully make this soup, anyone can.