There are lots of great seafood options at Asian restaurants (the sole fish fillet in chili bean sauce at our favorite local place is amazing), but delicate seafood often doesn’t hold up well in sauce when ordered for delivery. Rather than suffer through soggy seafood, we usually stick to proteins that can better handle the trip—pork in garlic sauce, Mongolian beef, or General Tao’s chicken to name a few—when paying someone to bring Chinese food to our door. We also have a couple of go-to Asian seafood dishes that are worth sacrificing the ease and convenience of either dine-in or delivery to cook for ourselves at home. Our Thai coconut curry soup with sea bass or shrimp is a favorite that placates Dan’s sad cravings for the lemongrass-poached Chilean sea bass with rice noodles in chili lime broth from our beloved Malai Kitchen back in Dallas. We also love our simple, yet elegantly delicious ponzu sea bass. Now we have a third recipe to add to our crave-worthy Asian-seafood-at-home repertoire. This shrimp stir fry is bright and fresh with a nice amount of spice and tang from the hot and sour sauce. We also appreciate how cooking the ingredients in batches keeps the veggies crisp-tender, while making it easy to cook the shrimp to plump perfection. The only thing missing is a fortune cookie. 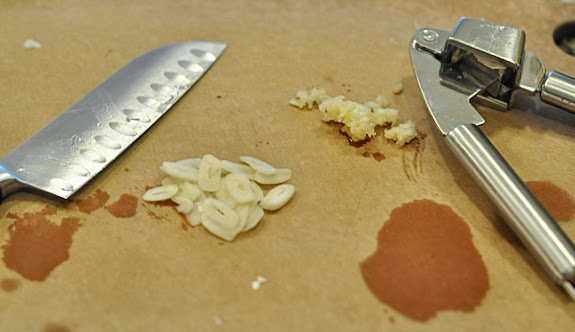 We adapted the recipe from one we found on Cook’s Illustrated, the site we often consult when trying new recipes, since they do extensive testing of ingredients and cooking methods. Start with the garlic:  mince one clove through a garlic press and thinly slice another clove. 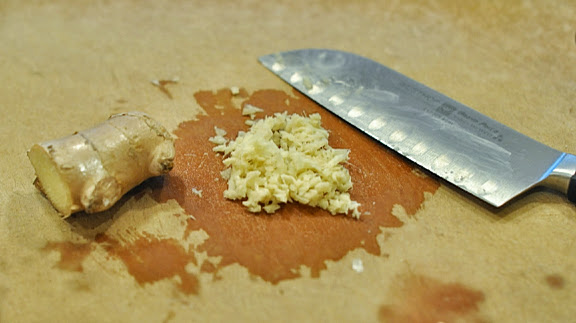 Mince about a tablespoon worth of fresh ginger. 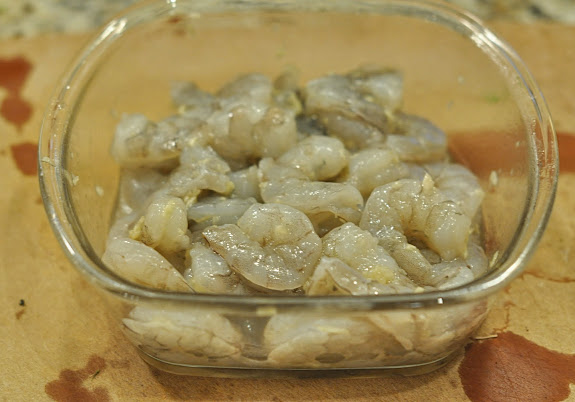 Combine the minced garlic and ginger with a tablespoon of vegetable oil and half a teaspoon of salt in a small bowl, then toss about a pound of medium-sized shrimp in the mixture. Marinate the shrimp at room temperature for 30 minutes. (Don’t worry, the shrimp will not go bad if left out for half an hour. Cook’s Illustrated tests this kind of stuff, remember? Trust them, they are America’s Test Kitchen!) 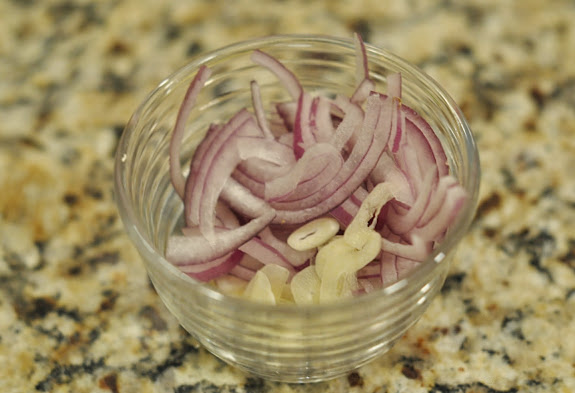 While the shrimp marinates, prepare the remaining ingredients. This stir fry cooks quickly, so it’s helpful to have everything ready before you heat up the skillet. Thinly slice a shallot and combine it with the sliced garlic. 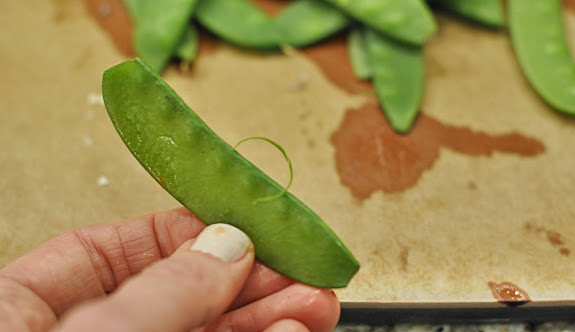 The recipe calls for snow peas or sugar snap peas. Whichever you are using, snip off the ends and remove the strings. We used sugar snap peas, and they were delicious. To make it a little easier to eat the finished product, and because the snap peas were pretty big, we cut the snap peas in half. 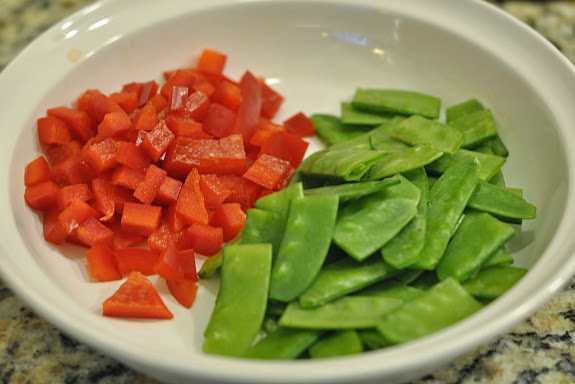 Dice a red bell pepper and combine with the sugar snap peas. 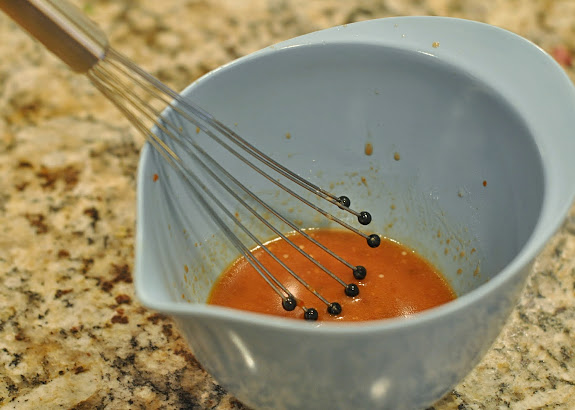 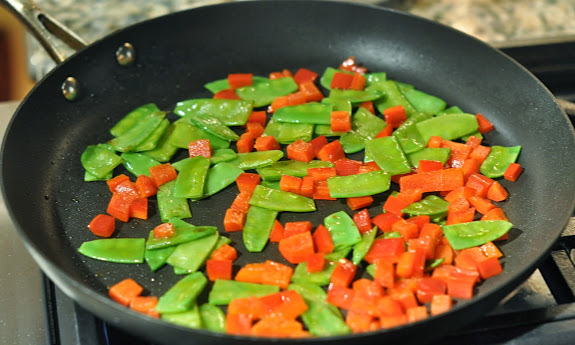 Heat a tablespoon of vegetable oil in a large nonstick skillet over high heat. Add the red bell pepper and snow peas and cook, stirring often, until the vegetables begin to brown—about 1.5 to 2 minutes. Transfer the veggies to a bowl or plate. 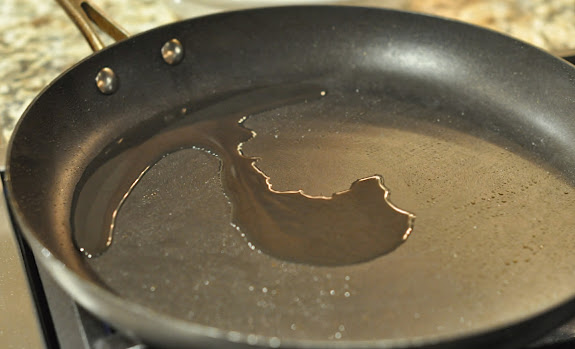 Add another tablespoon of vegetable oil to the skillet and heat until almost smoking. Add the garlic-shallot mixture and cook, stirring often, for about 30 seconds (be careful not to brown the garlic, or it will become bitter). 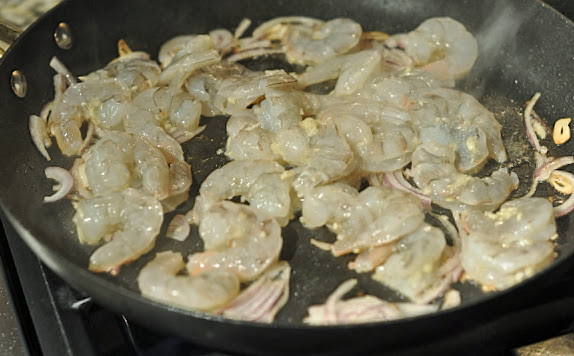 Add the shrimp to the skillet, reduce the heat to medium-low, and cook, turning the shrimp a few times, until the shrimp are light pink on both sides—about 1 to 2 minutes. 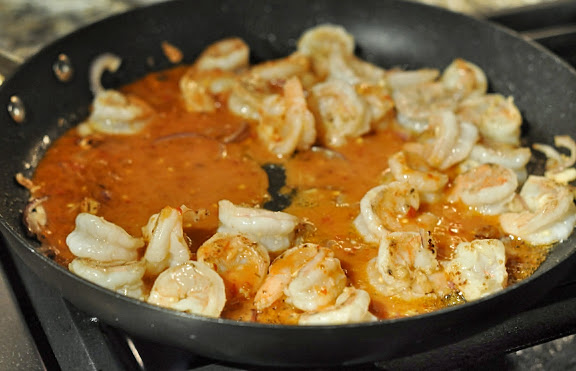 Whisk the sauce ingredients together again and add the sauce to the skillet. Turn the heat to high and cook, stirring often, until the shrimp are done and the sauce thickens a bit—about 1 to 2 minutes. 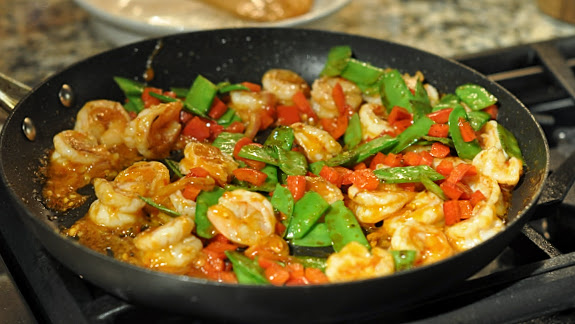 Return the vegetables to the skillet and toss together with the shrimp and sauce. 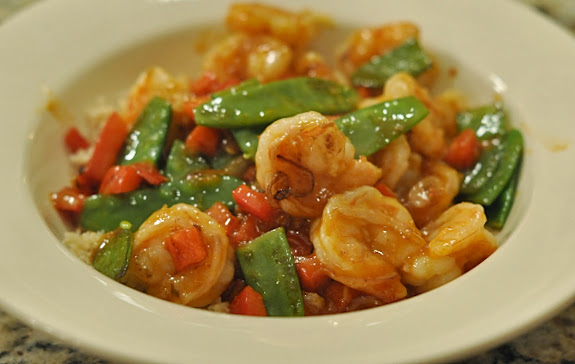 Serve immediately over cooked rice and garnish with a drizzle of sriracha for a little extra kick. Restaurant-quality Chinese food made at home is the best. And we remained full and satisfied, even more than one hour later.