When we lived in Texas, we didn’t cook enchiladas at home very often because there were so many readily available restaurant options, most of which were far superior to anything homemade. But since moving to the Midwest, where Tex-Mex is neither abundant nor appetizing (except for this place, which we were thrilled to discover just opened about two weeks ago), we’re on our own when we crave our favorite Texas fare. So when Dan noticed tomatillos at the farmer’s market a few weeks ago, we decided it would be a good time to attempt enchiladas verdes at home. If you’ve never had them (I feel bad for you), enchiladas verdes are basically enchiladas (cheese and whatever other filling you like—onion, chicken, pork, beef, etc—rolled in corn tortillas and baked) with a green sauce on top. Done well, the sauce is anything but basic, with a bit of tang from the tomatillos, heat from a jalapeno, and complexity from onion and garlic. When researching Tex-Mex recipes, one of our go-to resources is Homesick Texan, whose recipes are equally authentic and delicious. Her salsa verde recipe is no exception and provides just the right flavor combination to scratch that Tex-Mex itch. Since we didn’t have any leftover cooked chicken or pork to use in the enchiladas, we adapted this recipe to season and cook the chicken for the filling. There’s still nothing quite like the real thing (especially from here), but these enchiladas are the perfect homemade substitute until our next trip back to the Lone Star state. 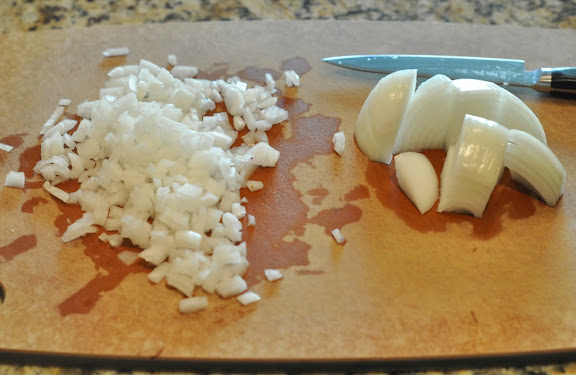 Start by chopping an onion in half. Dice one half of the onion to use for the chicken filling, and cut the other half into wedges for the salsa verde. 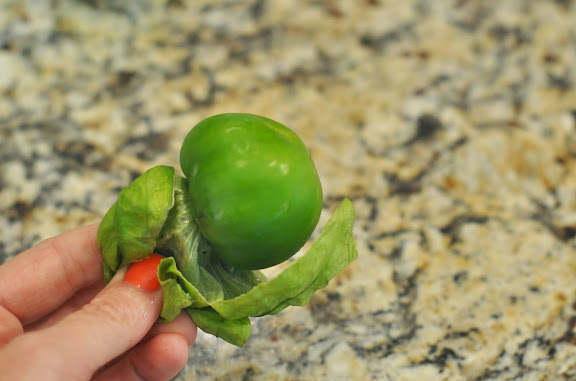 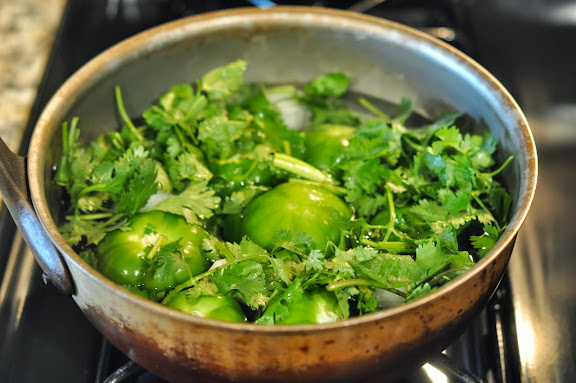 Place the tomatillos and onion wedges in a pot with 3 cloves of garlic (peeled), 1 or 2 jalapenos or serrano chiles (cut in half, seeds removed), and about 1 cup of cilantro leaves and stems. Add 2-3 cups of water and bring the mixture to a boil. The recipe calls for 1 1/2 pounds of tomatillos and 3 cups water, but we only had about a pound. Next time we’ll use less water in the sauce if we’re using less tomatillos. The finished sauce still tasted great, but it could have been a little thicker. Continue to boil the sauce, uncovered, until the tomatillos lose their bright green color—about 10 minutes. If any of the tomatillos are not completely submerged in the boiling water (they likely won’t be), keep an eye on them and turn them as needed so they’ll cook evenly in the water. 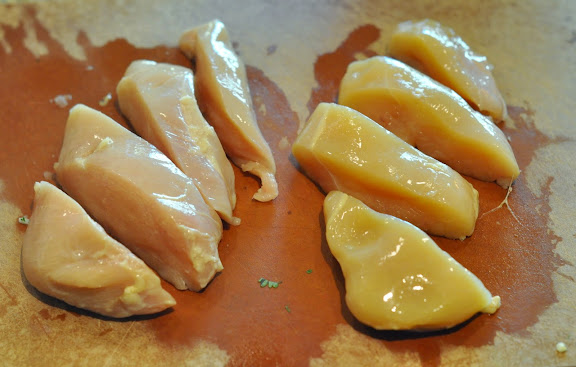 While the salsa verde cooks, prepare the chicken. We used chicken breasts cut in half, but you could also use tenderloins. 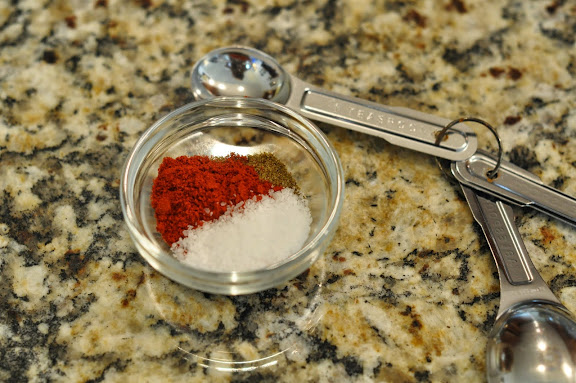 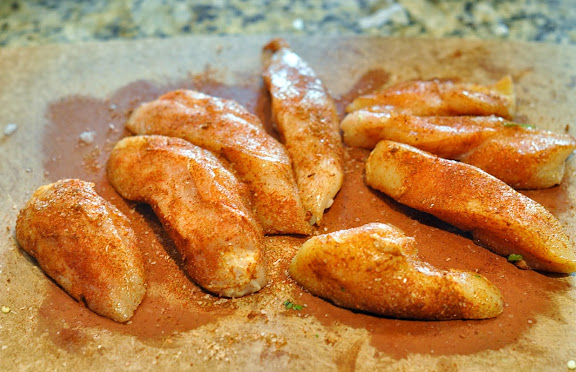 Sprinkle the spice mixture over the chicken until coated on both sides. 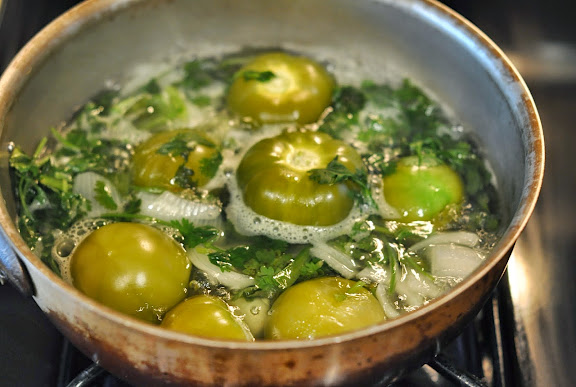 The tomatillos are done when they turn a muted green color. Turn off the heat and allow the sauce to cool a bit. 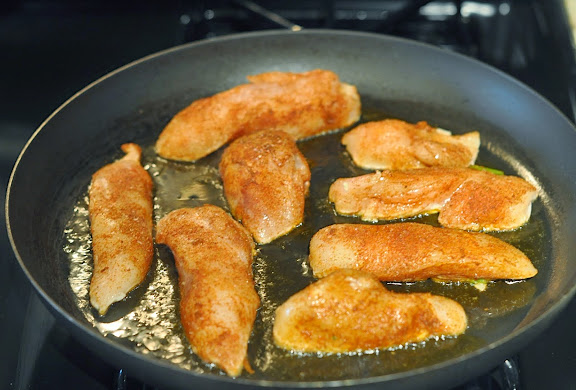 Heat about a tablespoon of canola or vegetable oil in a large nonstick skillet, add the chicken and cook, turning once, until the chicken is done and lightly browned on both sides—about 6-8 minutes total (total time depends on the thickness and size of the chicken.) Remove the chicken to a plate and set aside. 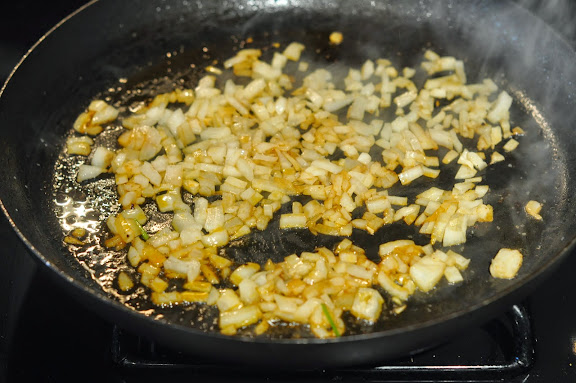 Add the diced onion to the same skillet and cook over medium-high heat until the onion softens—6-8 minutes. 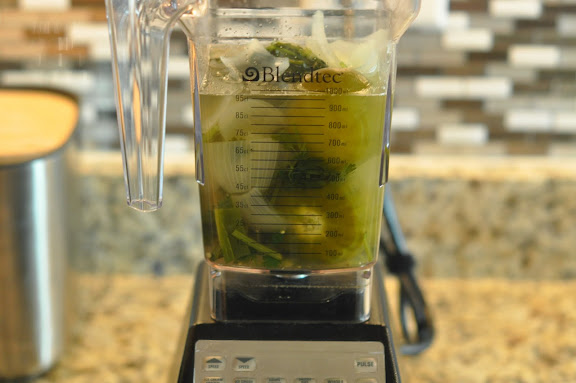 Add the cooled tomatillo sauce to a blender and blend until smooth. (Allowing the sauce to cool before blending prevents steam from building up in the blender and blowing the top off, something I can honestly—and surprisingly—say I’ve never actually done, thank goodness. *Knocks on wooden desk while typing this.*) Season with salt and a dash of cumin to taste. 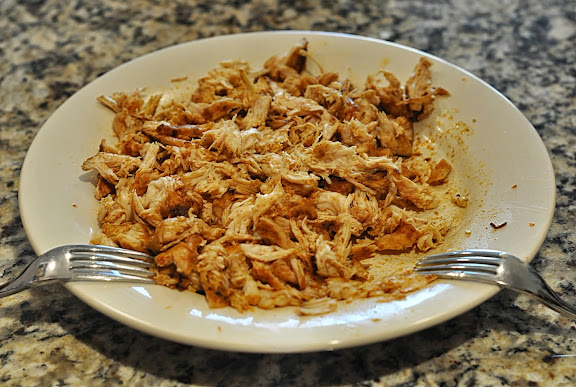 Use forks to pull the cooked chicken apart and shred it into small pieces. 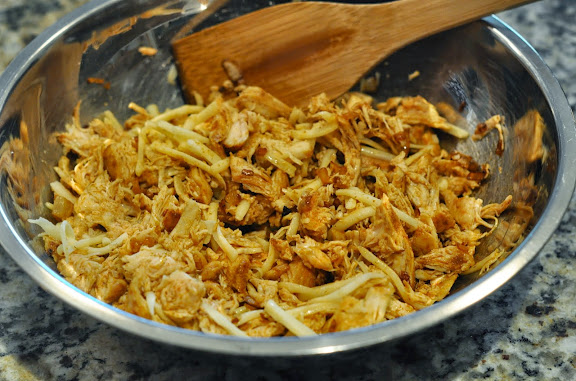 Stir the onions and chicken together in a large bowl for the filling. We also like to mix in a few tablespoons of the sauce and handful of grated monterey jack cheese. 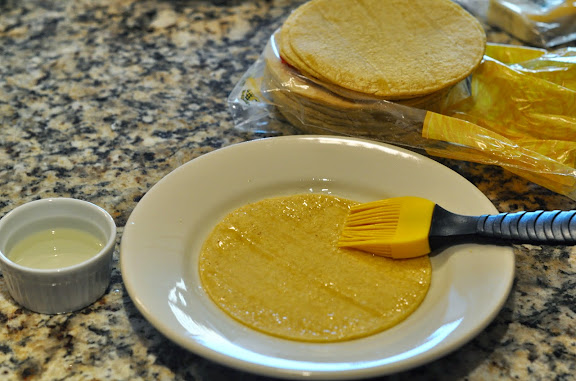 We think it’s tortilla preparation that prevents our homemade enchiladas from reaching restaurant-quality status. Corn tortillas are rather tough and can break apart when you roll the enchiladas if not prepped properly. The old-school way to soften them is to fry each tortilla in hot oil for a few seconds. To save time and the potential grease factor, we’ve tried other methods for softening the tortillas, including wrapping a stack of them in damp paper towels and foil and heating them in the oven. Another method involves brushing a bit of oil on each tortilla, stacking them and heating them in the microwave. We’ve never been 100% happy with the texture of the finished enchiladas using either method, so we’ll probably try frying them next time to see if it makes any difference. 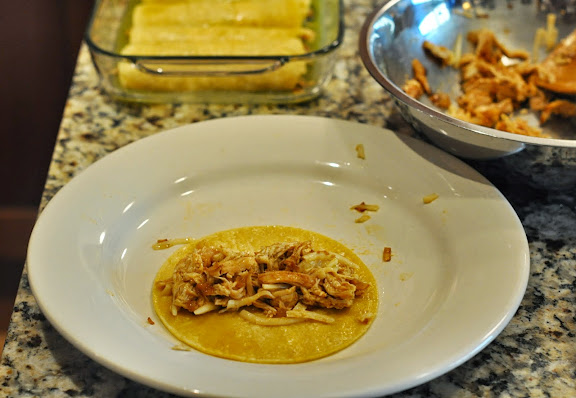 Spoon a layer of the salsa verde in the bottom of a glass baking dish before you begin rolling your enchiladas. Working one at a time, place the chicken filling in the center of the softened tortillas, roll them up and place them seam-side down in the glass baking dish. 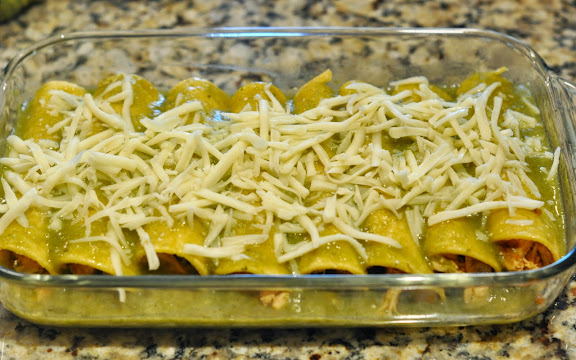 Spoon tomatillo sauce over the top of the enchiladas, then add grated monterey jack cheese. Bake the enchiladas in the oven preheated to 375 until the cheese is melted and bubbly—about 15-20 minutes. 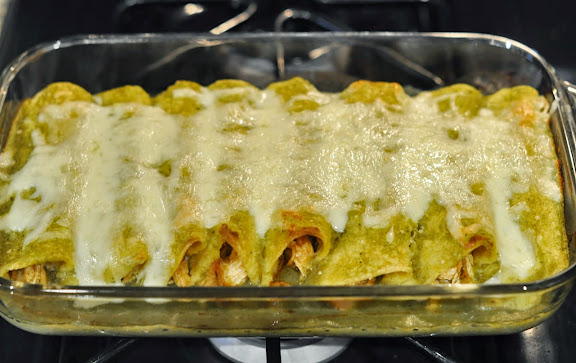 Serve the enchiladas garnished with avocado, sour cream, onion slices, or whatever garnishes you prefer. The abundance of Tex-Mex options is just one of the things we miss about Texas, so having good homemade versions of this cuisine helps to prevent us from running around Chicagoland demanding burritos, í  la  Homer Simpson.