Martha Stewart’s got nothing on our sister-in-law in Brooklyn. When we recently visited her, Dan’s brother and their adorable boys, she made her own version of Martha’s slow-cooker buffalo chicken recipe, and we were most impressed. After just a few bites, we knew it was a crave-worthy dish that would be added to our regular meal rotation. And we were excited to share it with pretty much anyone we know who cooks and happens to like the spicy, tangy goodness that is buffalo sauce. Our first attempt turned out a little more BBQ than buffalo (I think because I went off-recipe and used chicken stock instead of water to de-glaze), but we loved the classic, low & slow cooking that resulted in tender, juicy, flavorful “pulled” chicken without the use of a smoker or grill. After minimal prep steps of browning the chicken, sauteing the onions and mixing up the sauce ingredients (which can be adapted to the spice and tang levels of your liking), the slow-cooker does all the work, making this dish as easy as it is delicious. We envision ourselves making buffalo chicken often this summer—setting it up in the morning to cook for hours while we read/relax/play at the (lakeside) beach, then strolling home to a mouthwatering dinner that requires no more effort than shredding fork-tender chicken, spooning it onto buns and opening a chilled bottle of Rose wine. As Martha herself would say, “It’s a good thing.” Indeed. 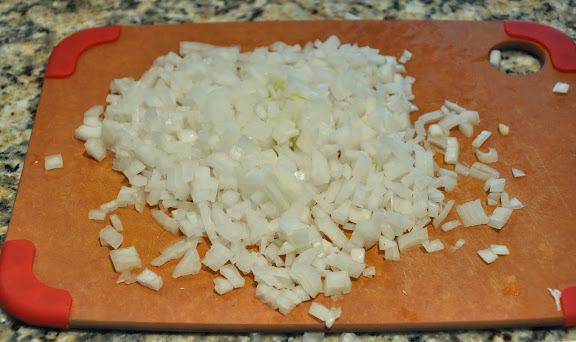 Start by chopping an onion (yellow or white work best in this recipe). 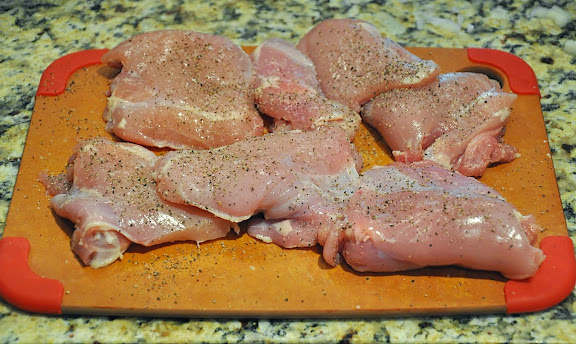 Trim the fat from the boneless, skinless chicken thighs and season them with salt & pepper. 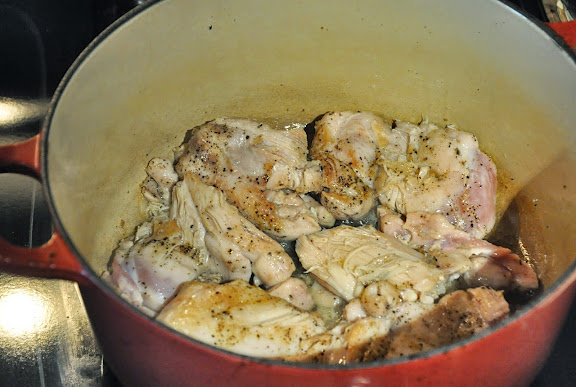 In a Dutch oven or other large, heavy-bottomed pot, heat 1-2 tablespoons of vegetable or canola oil over medium-high heat. Add the chicken and cook, turning once, until the thighs are lightly browned on both sides — about 6-8 minutes total. Transfer the chicken to the slow-cooker. 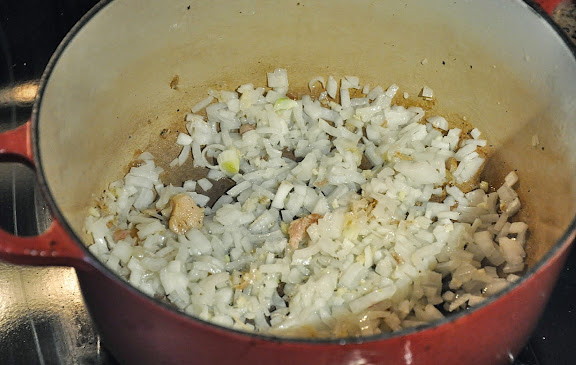 In the same pot (with the rendered fat from the chicken), add the onion with a dash of salt and cook over medium heat until the onion softens and becomes translucent — about 5-7 minutes. Add the garlic and cook until fragrant — about 30 seconds. 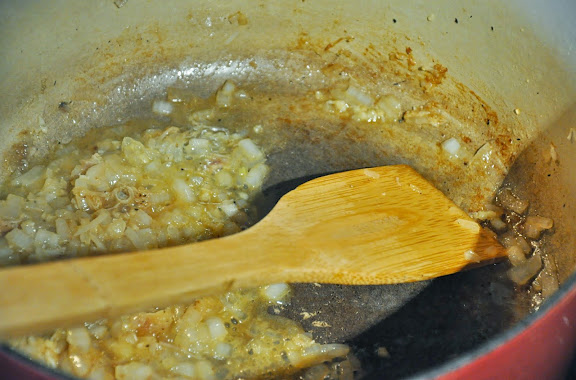 Add about 1/4 cup water to the pot and cook, scraping the browned bits from the bottom, for 4-5 minutes. Because we had an open chicken stock in the fridge, I went rogue and used stock instead of water, which I believe is what caused our version to turn out tasting a bit more like BBQ chicken than buffalo. But it was still really good. Transfer the onion mixture to the slow-cooker. 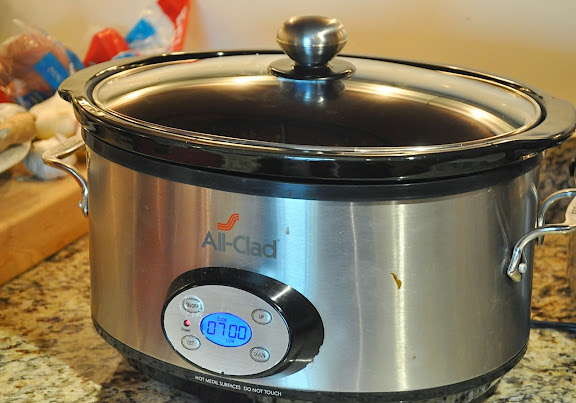 The original recipe calls for dumping the sauce ingredients directly into the slow-cooker, but we think it would be easier to mix them together first. (I do not have a picture of this step because I am generally a rules-follower and slave to original recipe instructions.) In a small bowl, mix together the sauce ingredients: crushed tomatoes, hot-pepper/buffalo sauce, Worcestershire sauce, yellow mustard and molasses. Taste and add more hot-pepper sauce if you like it more spicy. Add the mixture to the slow-cooker and stir everything together to disperse the onions and coat the chicken thighs. Cook on low for 5-7 hours. (Clean the errant drips of sauce off the front of the slow-cooker if you are a more tidy cook than me.) 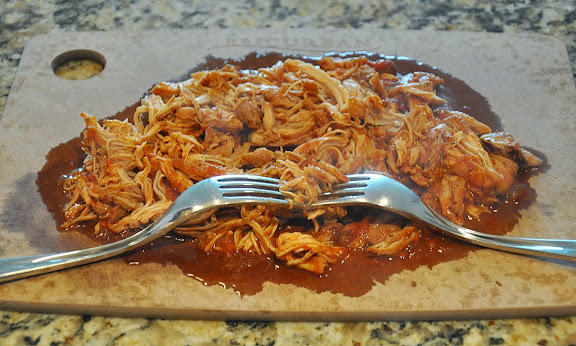 Use forks to shred the chicken. Return the chicken to the sauce in the slow-cooker, taste and adjust the seasonings (salt, pepper, hot sauce) as needed. 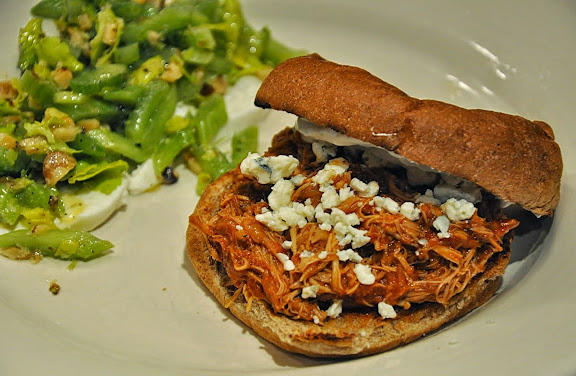 Serve the chicken on buns. We garnished ours with crumbled gorgonzola cheese and a little “homemade” ranch dressing (nothing crazy—just greek yogurt mixed with a half a packet of ranch dressing powder) and served celery salad on the side. In addition to amazing sandwiches, we think this chicken would be equally good in a salad or as taco filling. I also happen to know from personal experience that the leftovers make excellent nachos—piled onto tortilla chips, then topped with melted cheddar cheese and chopped green onion.