We seem to be having a lamb “moment” these days, cooking it much more often than we ever have in the past.  So far, our favorite ways of preparing lamb are Guinness-glazed and Mediterranean-style.  Who could blame us, really, when perfectly grilled lamb is so tender with just the right amount of richness.  We also enjoy kebabs of many kinds (including beef, shrimp, pork, and more pork), so when we found Ina Garten’s recipe for lamb kebabs, we knew we had a winner.  The lamb marinates in a simple mixture of garlic, thyme, rosemary (or oregano if you don’t prefer rosemary), red wine, red wine vinegar and salt for 8 hours or up to 2 days.  Grill the lamb on skewers with onion and tomatoes, then serve over a bed of couscous with a lemony sauce on the side.  The result is a surprisingly sophisticated meal, considering how easy it is to make.  The marinade imparts complex flavor with minimal effort, and grilling the lamb kebab-style allows for uniform cooking to just the right doneness (the rare side of medium-rare is how we like our lamb.)  The sauce requires all the skill of boiling a pot of water, and grilling skewers of onion and tomatoes with the meat incorporates vegetables without having to come up with a separate side dish.  Couscous (or some other, similar granule-sized pasta or grain) provides nice texture, and the most basic version of it is as easy to make as the sauce (a/k/a bringing liquid to a boil.)  You can fancy up the couscous with sauteed shallots, toasted pine nuts and chopped fresh parsley if you want (as Ina does), but the kebabs and sauce provide enough flavor that plain couscous works just as well.  Looks like we’ve got ourselves another “keeper” lamb recipe.  Too bad I won’t let us eat red meat more often! 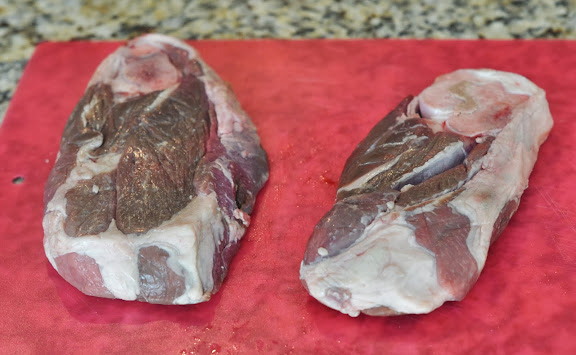 The original recipe calls for “top round lamb,” but all our grocery store had was “lamb leg steak,” so we used that instead.  Bone-in lamb leg is probably not the wisest choice for kebabs (and for a rather sqeamish preparer of raw meat like me), since it requires a lot of fat-trimming and cutting meat off the bone. 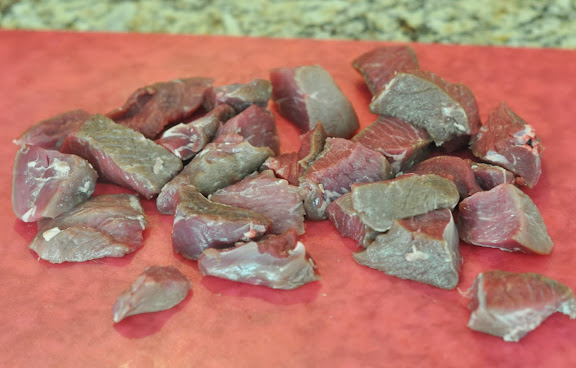 But I knew our dinner would be worth it in the end, so I persevered and cut the lamb into 1 to 2 inch-sized pieces.  Don’t worry if not all the pieces are the same size — you can always skewer the lamb according to size (i.e., all the smaller pieces on the same skewer) so that it cooks evenly. 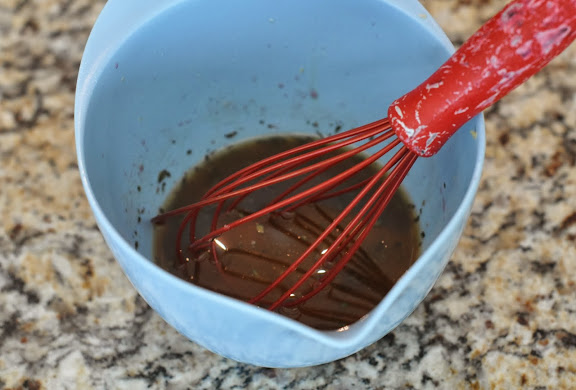 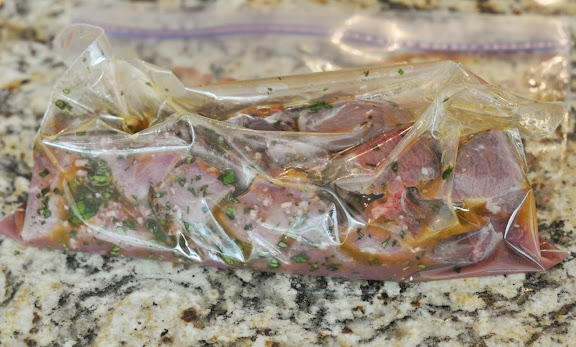 Place the lamb in a resealable bag or container, add the marinade and refrigerate for at least 8 hours and up to 2 days.  Toss the lamb around in the marinade every now and then to distribute the flavors, especially if you are marinating it for longer than 8 hours. 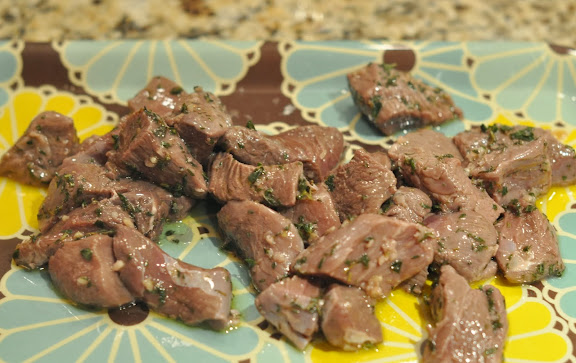 When it’s time to grill the lamb, take the pieces out of the marinade (discard the marinade) and bring them to room temperature. 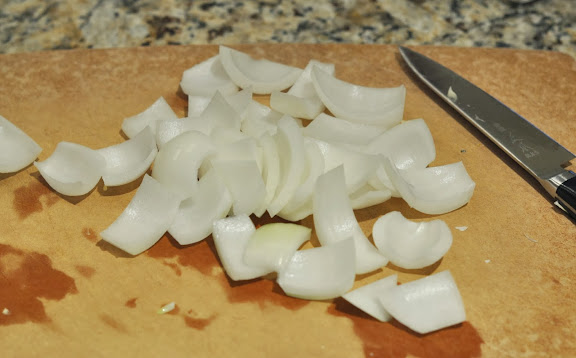 Cut an onion into 1 to 2 inch-sized pieces for skewering. 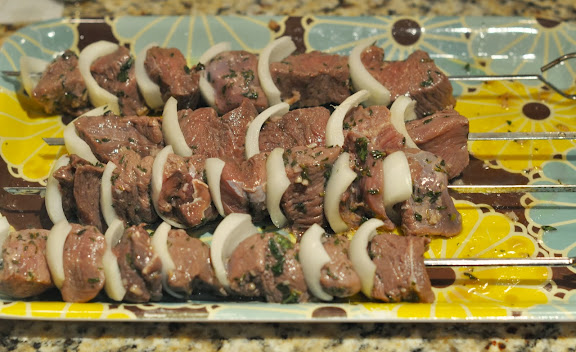 Thread the lamb onto skewers with pieces of onion alternating between the pieces of meat.  Be sure to leave enough space at the “handle” end of the skewers so you can turn them while they are cooking.  Try to place similarly-sized pieces of lamb on each skewer, to help you control the cooking process and ensure even doneness (e.g., grill the skewers with small pieces over more indirect heat since they will cook faster than the bigger pieces.)  Season the kebabs with salt and pepper. 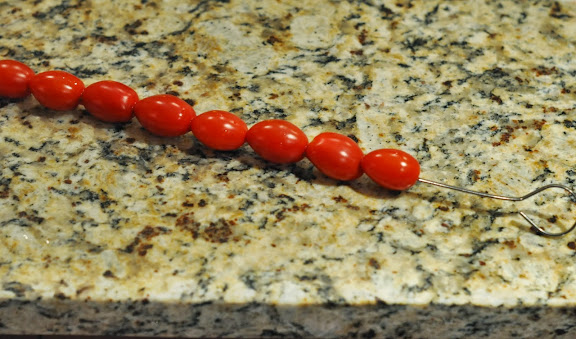 Thread a skewer with cherry or grape tomatoes, brush the tomatoes with a little olive oil and season with salt and pepper.  We only had enough tomatoes for 1 skewer that night, but next time we’ll make sure we have enough for at least 2 skewers. 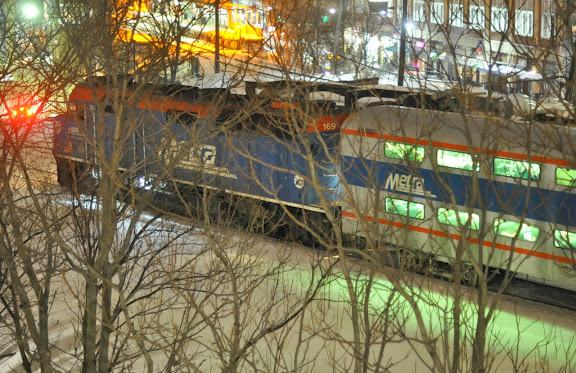 When Dan went out to light and heat the grill on our terrace, he noticed that a train was stopped on the tracks that run beside our condo.  The train was stuck there for quite a while, so we hope the passengers enjoyed the free grilling demo! 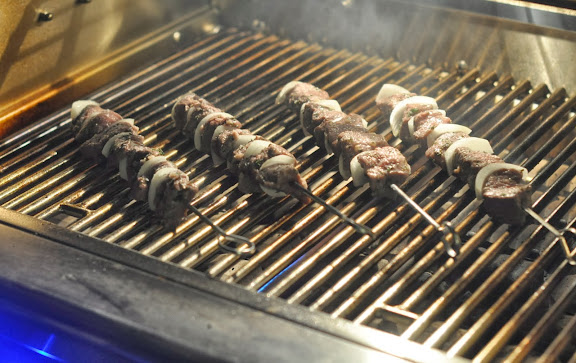 Grill the kebabs over direct medium-high heat until the lamb is medium-rare — about 10-12 minutes.  Turn the skewers a couple of times during the cooking process so that the lamb browns on all sides.  Wave to people stuck on a train nearby. 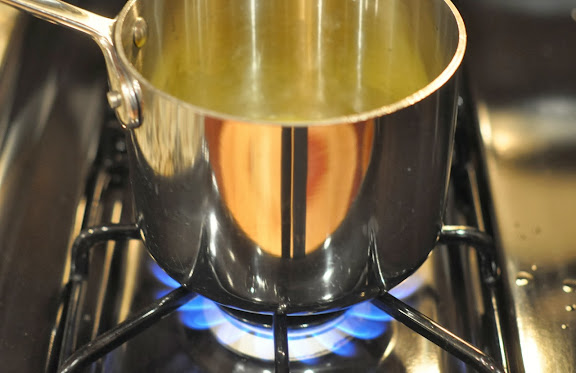 To make the sauce, heat chicken broth, olive oil and lemon juice to a boil in a small pot.  Lower the heat and simmer the sauce until it reduces by half — about 8-10 minutes. 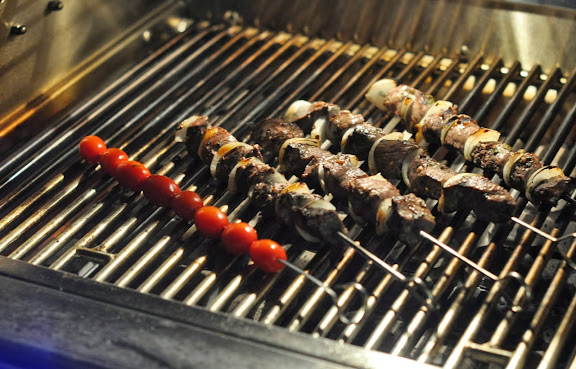 When the lamb has about 5 more minutes of cooking time, add the tomatoes to the grill and cook, turning once, until the tomatoes are slightly seared on the outside but still firm on the inside. 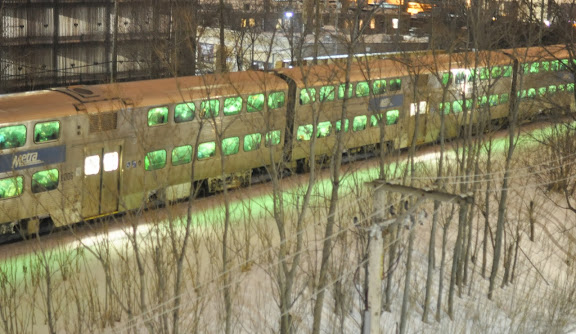 Still stuck, poor things.  I wonder how many of them felt like Elaine from the show “Seinfeld,” on her way to a lesbian wedding. 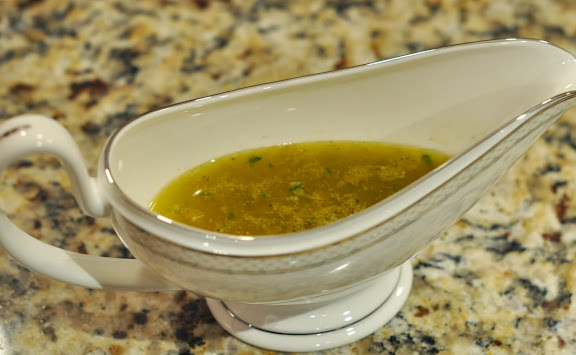 When the sauce is done, stir in a little chopped fresh oregano and add salt & pepper as needed.  Our sauce didn’t reduce that much for some reason, so it was pretty watery.  But that gave us a good excuse to use the gravy boat from our set of wedding china, for maybe the third time ever.  And it still tasted good with the lamb. 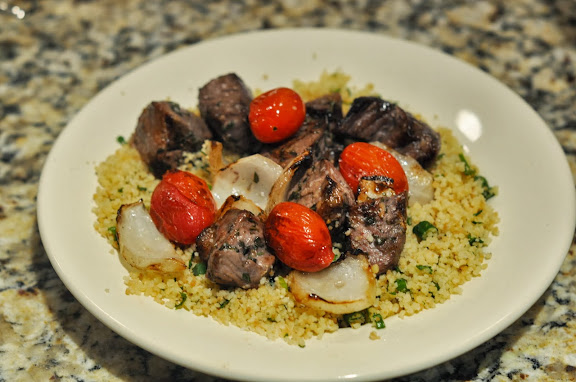 Remove the lamb, onions and tomatoes from the skewers and serve over couscous.  We love how this easy and simple meal tastes fancy and seems special enough for a dinner party.  (And it almost felt like we were having one – of sorts – that night, with our captive train passenger audience parked nearby while we ate.)