Every once in a while, we have a meal or even just a bite of something at a restaurant that is so good, we are compelled to try to recreate it at home.  I was at a wine tasting recently, and had one of the best bites of lamb I’ve ever had.  It was an appetizer of tiny lamb chops that had been cooked in some sort of savory glaze.  Usually, the first place we start when attempting a restaurant dish at home is the restaurant menu, which hopefully lists at least some of the ingredients in the description of the food.  But, unfortunately, the lamb I had that night is not on the menu from the restaurant that hosted the tasting.  Despite that, and the fact that he wasn’t there and didn’t taste it himself, Dan managed to come up with a deliciously similar version, based solely on my feeble description of the dish and his excellent grilling skillz.  The best part about these lamb chops that taste fancy enough to be served at an upscale wine tasting?  They are ridiculously easy to make at home. 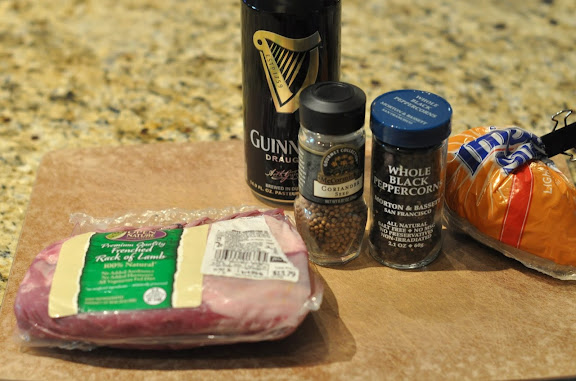 Dan found the recipe on the Epicurious website, and didn’t change anything other than cutting the glaze ingredient amounts in half and grilling the lamb instead of broiling it.  The ingredients are surprisingly simple, given the complex flavor of the finished dish:  an 8-rib rack of lamb; 1 cup Guinness stout; 1/4 cup light brown sugar; 2 1/4 teaspoons coriander seeds and 1/4 teaspoon black peppercorns (both crushed.)  The next time we make these (and there will be a next time!), we may consider using the full amounts of the glaze ingredients, just so we have a little extra glaze to brush on the chops at the end. 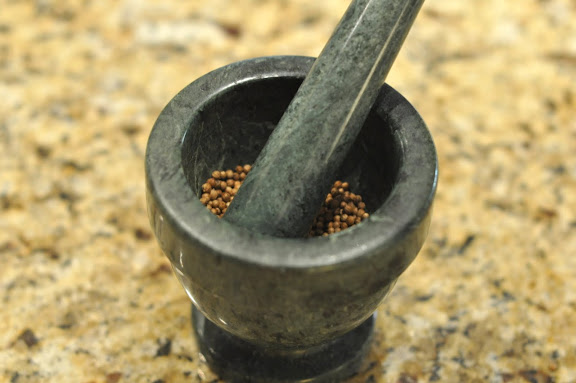 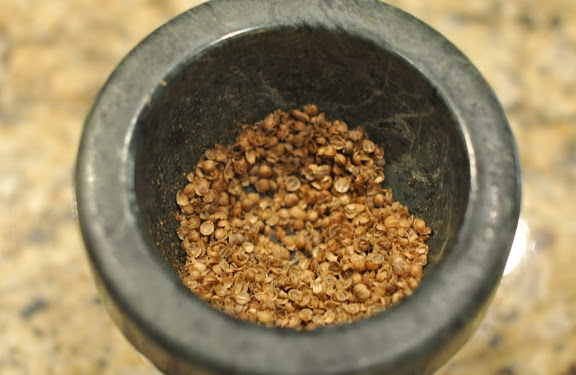 The seeds and peppercorns should be broken up pretty well, but not ground into powder. 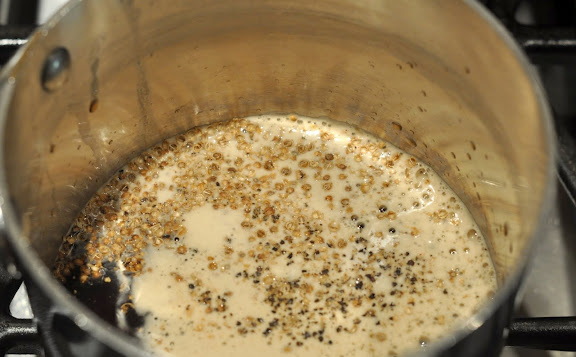 Combine the Guinness, brown sugar, crushed coriander seeds and peppercorns and 1/8 teaspoon salt in a small saucepan or pot and bring the ingredients to a boil, stirring until the sugar and salt dissolve. 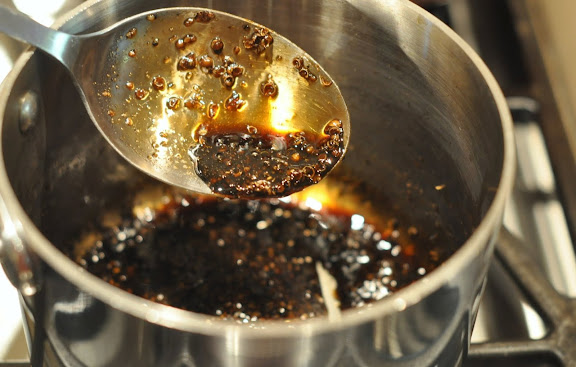 Cook the glaze on a low boil (reduce the heat as needed to keep it from boiling over), stirring often, until the glaze reduces and thickens to the consistency of syrup — about 20-30 minutes. 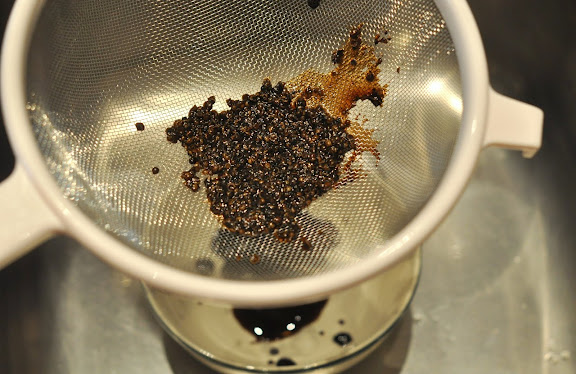 Strain the glaze through a fine-mesh strainer into a bowl and discard the leftover solid bits.  Don’t forget to put the bowl under the strainer!  I didn’t (this time), but only because I was super paranoid about forgetting and having to start all over.  Luckily, you can make the glaze ahead of time (at least 3 days) and store it in the fridge until you’re ready to use it, warmed up to room temperature. 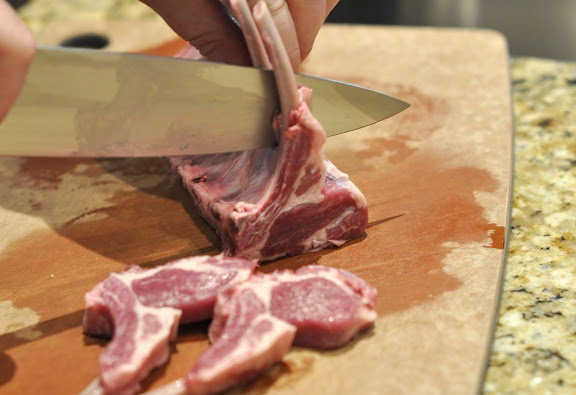 We used “frenched” rack of lamb, which means that the bones were already cleaned.  All we had to do was cut between each bone to get individual chops.  The clean bones serve as little handles for eating the chops — kind of like a lamb lollipop.  Pat the chops dry with paper towels and season each side with salt and pepper. 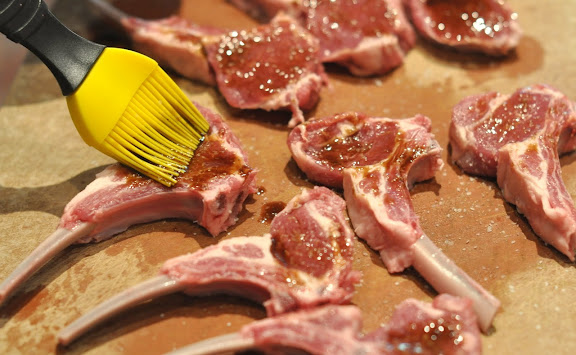 Divide the glaze into 2 bowls and set one aside.  Brush the glaze from the other bowl over both sides of each chop.  The remaining glaze will get brushed on the cooked chops just before serving. 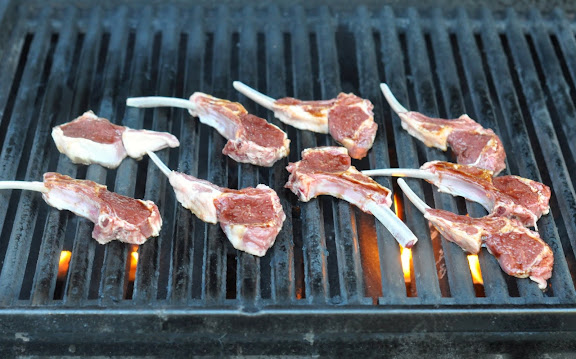 Grill the chops over medium-high heat, turning each chop halfway through the cooking time, until the chops are cooked to your preferred degree of done-ness.  We like our lamb chops on the rare side of medium-rare, so we cooked them for only about 3 minutes, which does not seem like a lot of time, but worked out perfectly given how thin these particular chops were (thicker lamb chops may take a few more minutes).  We wouldn’t recommend going much beyond medium with lamb chops, since the meat will become much less tender and can dry out the longer that it cooks. 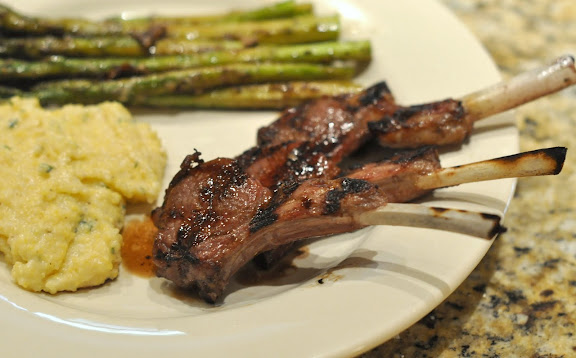 We served the lamb with balsamic-roasted asparagus and creamy parmesan polenta for a home-cooked meal as good as (if not better than!) any we should be so lucky to order in a high-end restaurant.  These chops were so good, they inspire us to maybe host our own wine tasting event at home one of these days.