Time for a little guilty confession:  we throw away stale, expired or otherwise past-their-prime fruits, vegetables and other foods more often than I like to admit.  Cooking portion-friendly meals for just the two of us can be difficult at times, considering how many recipes are intended for at least four to six servings.  We cut recipes in half often, freeze extra portions for later and/or reheat leftovers for lunch when we can, yet sometimes still end up with too much of a certain ingredient or leftover to use or consume before it goes bad.  We feel terrible throwing away food, so this particular recipe is a direct result of making sure we used up a container of arugula before it spoiled.  Whenever we have a particular ingredient in mind but can’t think of a recipe, Epicurious is our go-to site to begin researching.  I found this recipe there by doing an initial search for “arugula,” then refining the results by specifying arugula as the main ingredient (the site also has several other very useful ways to refine the results, including by meal/course, cuisine and “dietary consideration.”)  This pasta dish is a quick, easy and satisfying way to use up at least two cups of arugula, tossed with sauteed leeks, fettuccine, green onion, Parmesan, prosciutto and lemon zest.  And it’s good enough to justify the purchase of arugula in its own right, rather than waiting until we have leftovers. 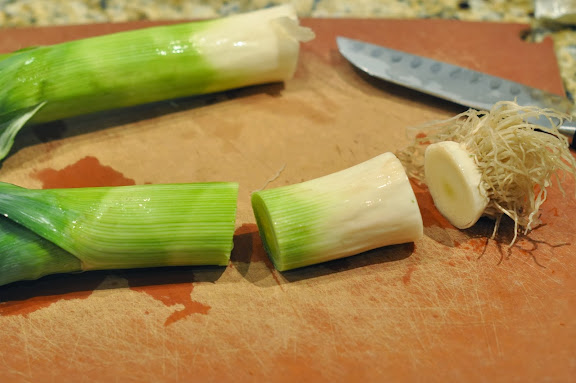 Start by preparing 2 leeks.  The only part of the leek you’ll use is the white part (minus the root end) with about 1/3 of the light green part.  (Speaking of throwing away food, it always seems like such a waste to me that most of the stalk is not usable, in cooking anyway.  Maybe next time I’ll put the stalk in some water in a vase and see how long it lasts in a decorative/greenery capacity.)  Cut several slits vertically along the outside of the leek and rinse the leeks with water while gently loosening the layers to wash out any dirt or grit. 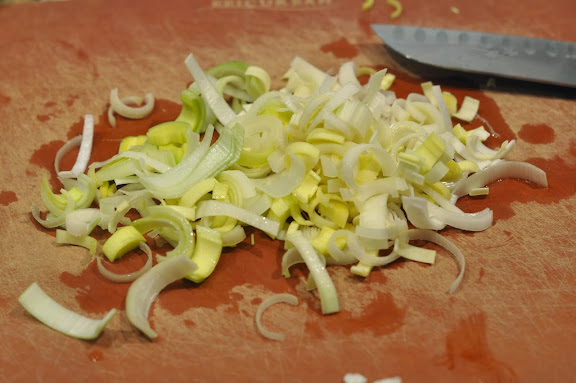 Thinly slice the leeks and pull apart all the layers so that the pieces will saute evenly. 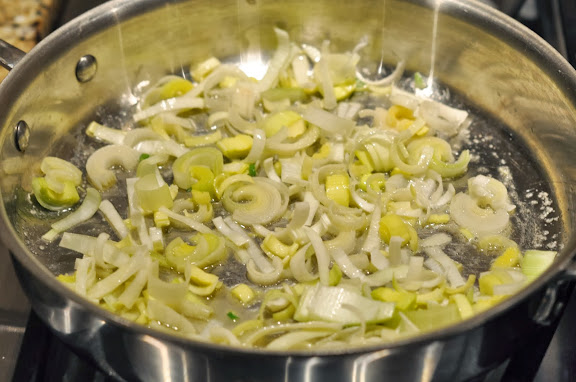 Heat a tablespoon each of olive oil and butter in a large skillet over medium heat, add the leeks and cook, stirring often, until the leeks soften — about 8-10 minutes. 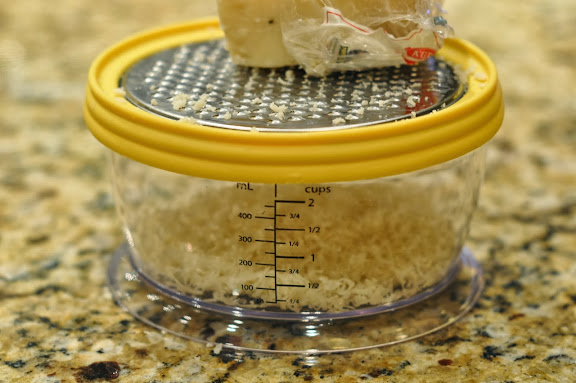 Grate about 1/3 of a cup of Parmesan cheese, plus a little more for garnish. 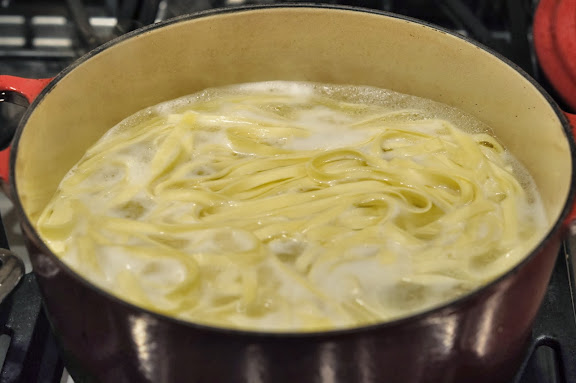 Cook the pasta in salted boiling water until al dente.   The full recipe calls for 1/2 pound of pappardelle or fettuccine.  We cooked a small package of store-bought fresh fettuccine (I don’t remember the exact size), but didn’t end up using all of it in the finished dish.  (So, yes, we threw out a little extra pasta when cooking a meal chosen to avoid throwing away arugula.  The irony is not lost on me.) 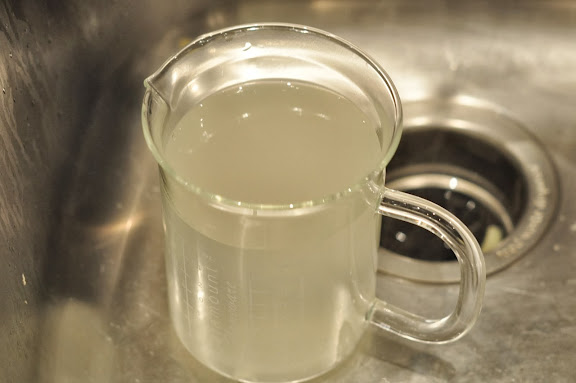 When draining the cooked pasta, save about a cup of the pasta water to help create a sauce. 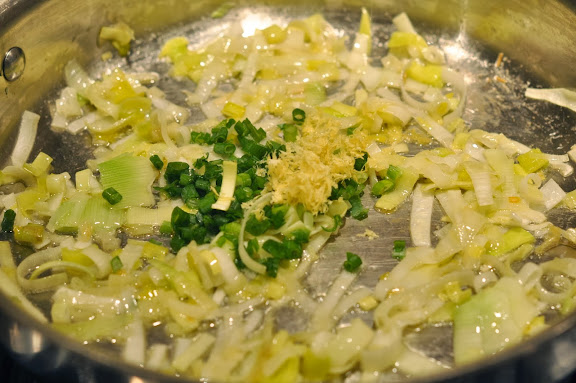 Add 2 chopped green onions (green parts only) and a teaspoon of lemon zest to the leeks and stir them together. 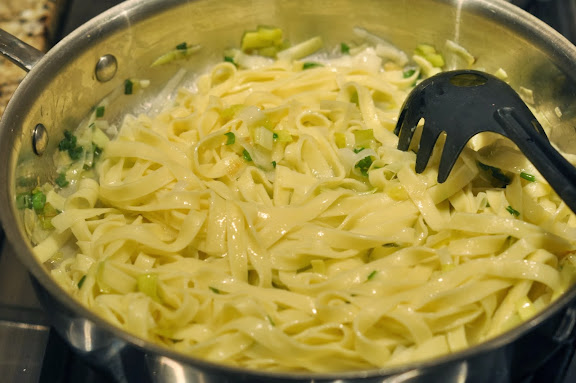 Add the pasta (as much or as little as you prefer) and a splash of the pasta water to the skillet.  Stir everything together and continue cooking over medium heat while slowly adding pasta water and stirring until the pasta is lightly coated with a glossy sauce. 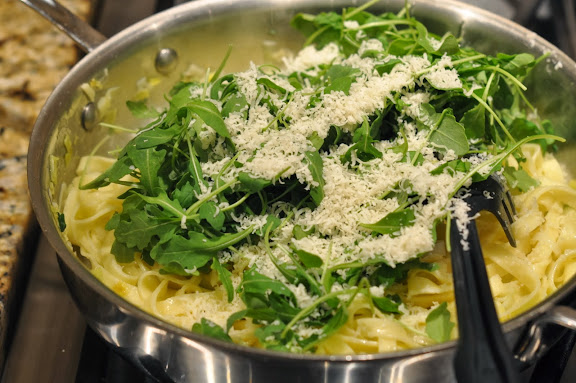 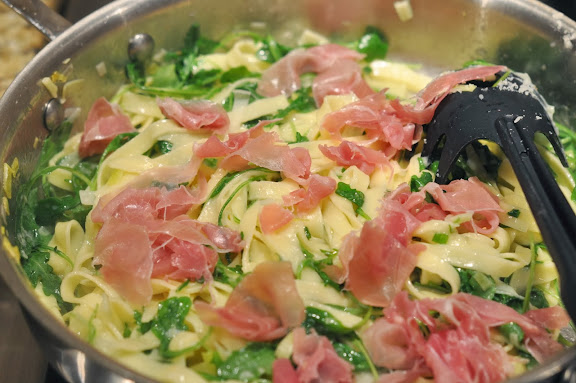 Add about 2 ounces of prosciutto, torn into small pieces.  Taste and season with salt and pepper as needed. 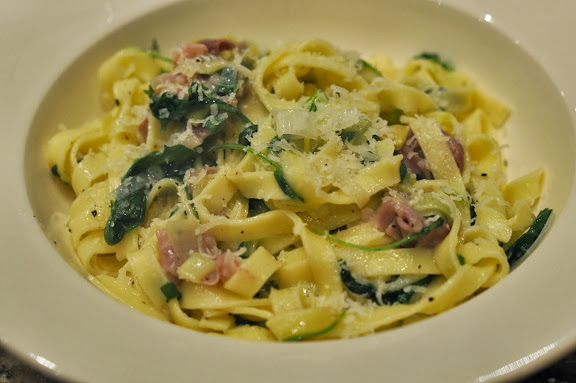 Serve the pasta garnished with a little more Parmesan, lemon zest and a drizzle of good olive oil.   The peppery arugula pairs really well with salty prosciutto and buttery pasta, and gets a bright finish from the lemon zest and olive oil.  Waste not, want not!  (Except for that tiny bit of un-used fettuccine.  Bygones.)

1 thought on “Pasta with Arugula and Prosciutto”