We always appreciate the one-dish-wonder type of dinner — a meal that incorporates all the basics (protein, vegetable and starch or carb) into a single recipe.  Such meals are especially useful during particularly stressful and/or busy times, such as when one is settling in at a brand new job in a new city and state, preparing to move to said new location, and selling a house and many of its contents in the old job’s location.  Or maybe that’s just us.  Wait, that actually IS us, right now.  Hectic as things may be, all is going well and we are starting to see the light at the end of the tunnel.  Amidst the chaos, it’s usually a lot easier to run out for a quick dinner at a restaurant or, even easier, order dinner delivered rather than cook.  But taking the time and making the effort to prepare a home-cooked meal is something we’re trying to make a conscious choice to do more often during these transitional times, as one kitchen gets packed up and the other is currently very sparsely outfitted.  For us, cooking and enjoying a meal together is what helps make a house feel like home, no matter the zip code (or fact that we may have to eat dinner sitting in patio chairs with paper plates on our laps.)  This recipe is a good reminder to slow down, spend some quality time in the kitchen, and enjoy the smells of roasting tomatoes and sauteeing mushrooms, onions and garlic.  Layering in some chicken, feta and parmesan cheeses and pasta adds comfort-food heartiness to the dish.  Finish with a little wilted spinach for color and nutritional value, and you’ve got a delicious and healthy meal that not only represents the major food groups in one pot, but also defines the “home” in “homemade.” 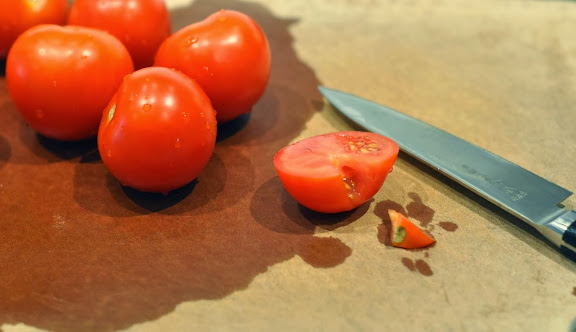 The recipe calls for plum tomatoes — quartered, seeded and wedges cut in half.  We’ve been enjoying cocktail-style tomatoes from our local grocery store, so we used those.  We cut them in half and removed the little stem part from the tops.  They aren’t very seed-y, so we didn’t bother removing the seeds. 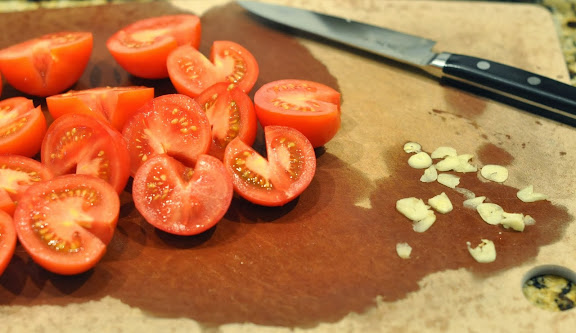 Instead of mincing the garlic, we just peeled it and sliced it thin. 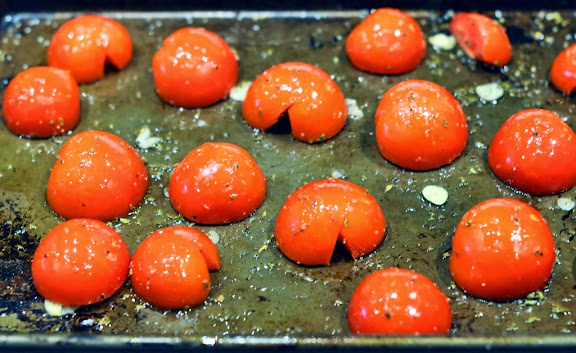 Toss the tomatoes and garlic with some olive oil and dried oregano, then lay the tomatoes cut-side down on a cookie sheet. 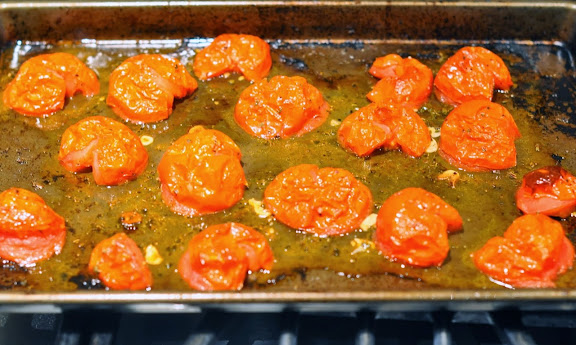 Roast the tomatoes in the oven preheated to 400 degrees until they soften and begin to wrinkle.  Set the tomatoes aside. If any of the garlic slices look too browned, leave them out of the final dish, since overly browned garlic can taste bitter. 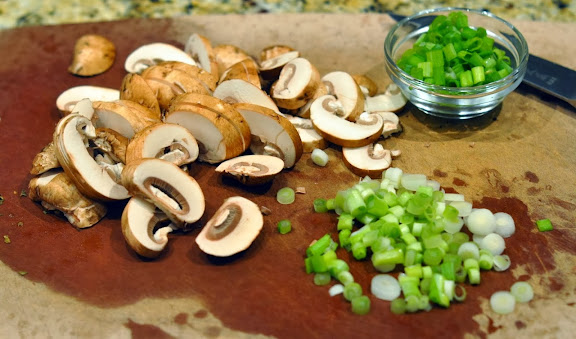 Although this isn’t a very chop-heavy dish, there is enough slicing for Dan to achieve the (for him) Zen aspect of practicing his knife skills while cooking.  Slice the mushrooms and chop up the green onions, separating the green ends from the white and light green parts. 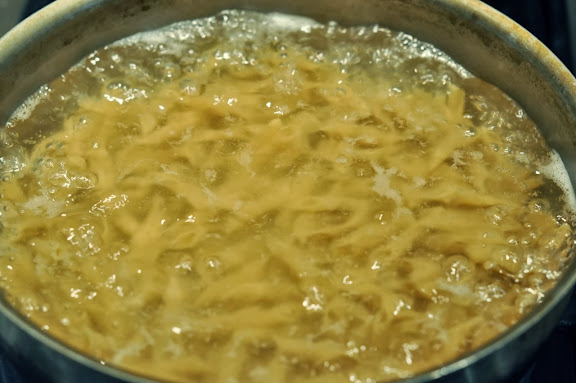 Boil the pasta in a pot of salted water until al dente.  Drain the pasta and set aside. 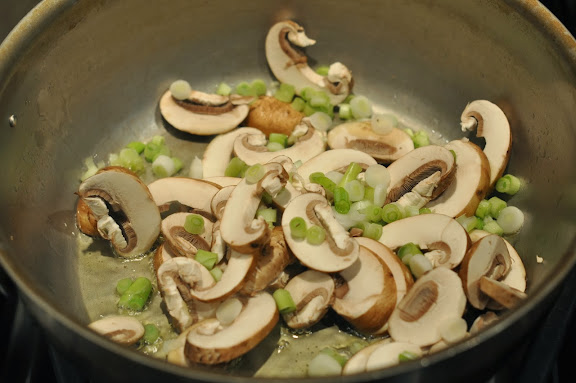 In the same pot, heat vegetable or canola oil over medium-high heat, add the mushrooms and onions (white and light green parts) and cook until the mushrooms soften and release their juices — about 8-10 minutes. 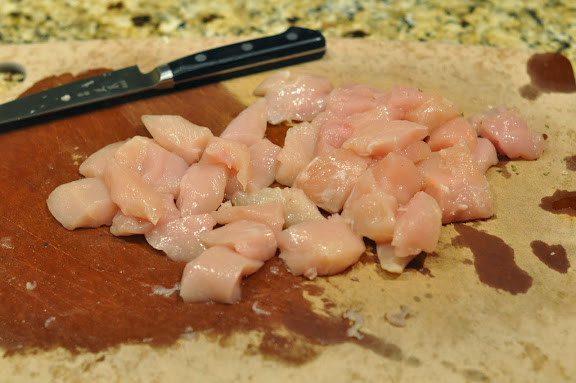 While the mushrooms and onions cook, cut the chicken tenders into 1-inch pieces.  Season the chicken with salt and pepper.  Bonus points if you have leftover, already-cooked chicken to make this dish even easier to make. 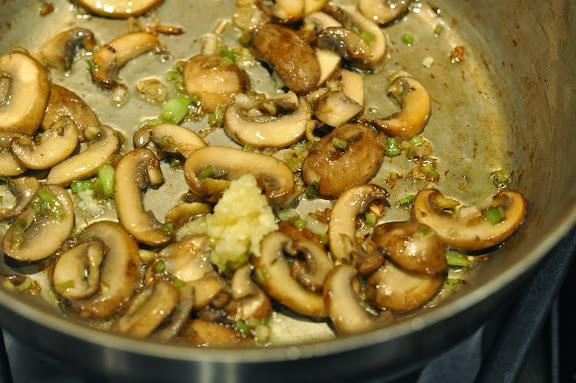 Add the garlic to the pot with the mushrooms and cook until fragrant — about 30 seconds.  Remove the mushroom mixture to a bowl and set aside. 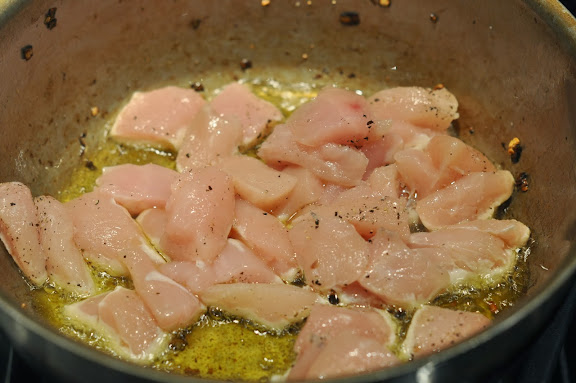 Heat another tablespoon of vegetable or canola oil in the same pot over medium-high heat.  Add the chicken and saute, stirring often, until the chicken begins to brown and is cooked through — about 5-7 minutes. 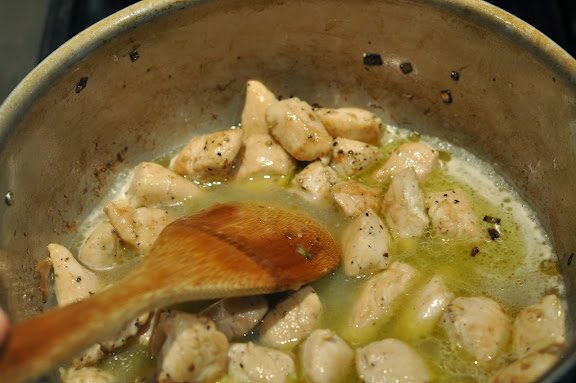 Add the chicken broth and white wine to the pot and scrape up any browned bits from the bottom. 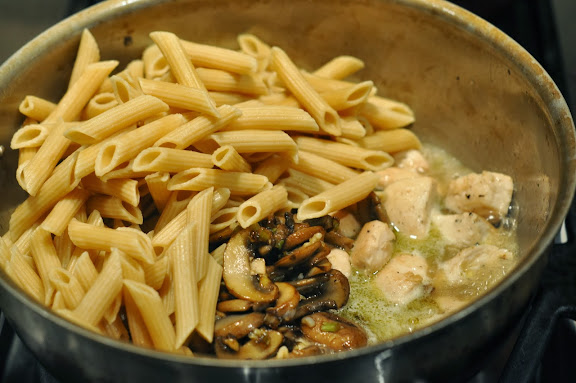 Add the mushroom mixture and pasta. 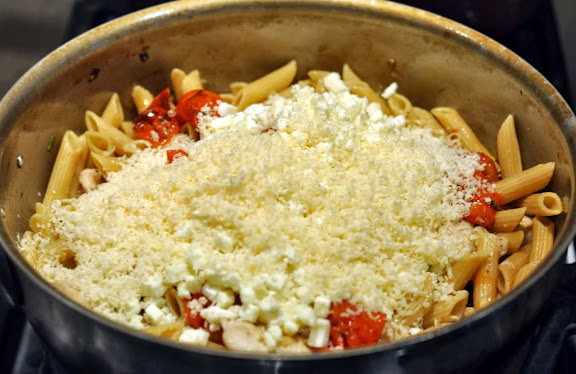 Then add the roasted tomatoes, feta and parmesan cheeses.  Stir everything together and cook until heated through and the sauce coats the pasta — about 4-5 minutes.  Taste and season with salt and pepper as needed. 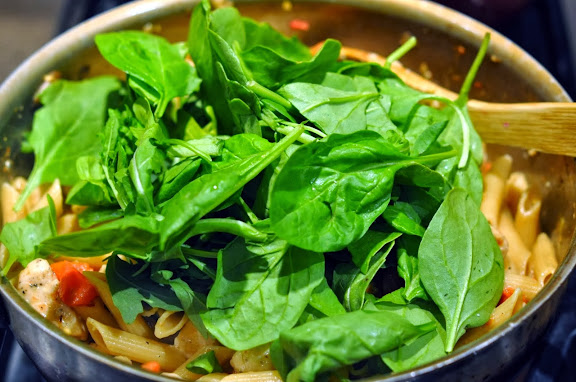 Since we happened to have some spinach in the fridge, we stirred it in with the pasta (off the heat) and let it sit for about a minute until barely wilted. 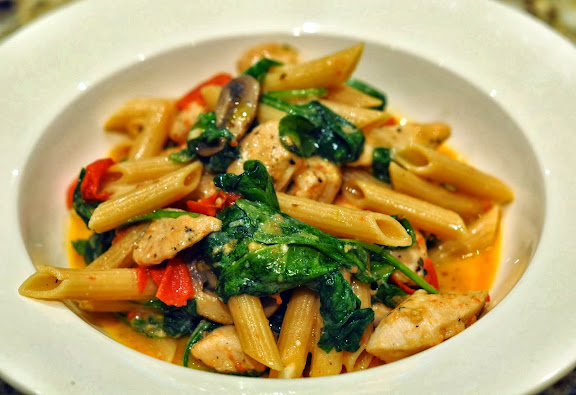 Serve the pasta with a side of crusty bread and a self-congratulatory pat on the back for creating a beautiful, home-cooked one-pot meal, even though it would’ve been a lot easier and quicker to just order a pizza.