My dislike of fishy-tasting fish is pretty well-documented on this blog. Â I don’t like fish, but I do like to try to eat healthy, and since fish can be a really good-for-you food to consume, I’m always looking for seafood recipes that don’t make me want to gag. Â Bonus points if said recipe is also easy to prepare. Â This fish dish fits both requirements, and then some. Â The recipe is inspired by one I heard about on the fourth hour of the Today Show (I know, I judge me too) from Hoda Kotb, who makes delicious sea bass by putting the fish in a shallow baking dish, adding ponzu sauce and baking it in the oven for about half an hour. Â That’s it. Â Hoda and Kathie Lee raved about the fish so much that we had to try it. Â We adapted the recipe a bit to have more of a sauce or glaze for the finished sea bass (fish with a sauce always seems more appetizing to me than plain fish), and we could not be happier with the result. Â Our recipe was further inspired by this one, which includes a marinade made with sake, mirin and soy. Â Instead of just ponzu and ginger for the sauce, we added sesame oil and brown sugar. Â With both a marinade and a sauce, the recipe sounds complicated, but it’s really easy. Â Just marinate the sea bass for about 30 minutes, sear it on both sides in a hot skillet, then finish by baking in the oven while the sauce simmers and thickens on the stove. Â I’m truly not exaggerating when I say that this is our new favorite fish dish, and that I actually crave it. Â If you like subtle Asian flavors, you will love this dish — even if you don’t particularly care for fish. Â Fellow Fish Haters (you know who you are): Â I hereby double-dog-dare you to try it. Â In fact, I insist! 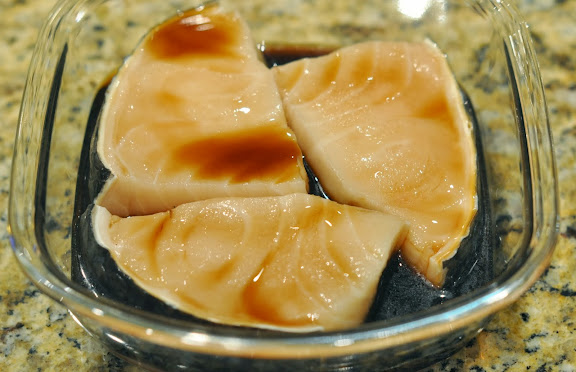 One of the keys to this recipe is to use a nice piece of fish. Â The sea bass looked good at our local Central Market, so that’s what we used. Â You’ll want to use a thicker fish (as opposed to a thin one like tilapia), so that it will hold up well when searing and baking. Â Leave the skin on because it will help keep the fish moist while it cooks, and the fish will easily pull away from the skin after it’s cooked. Â Marinate the fish in sake, mirin and soy sauce for about 30 minutes in the fridge prior to cooking it. 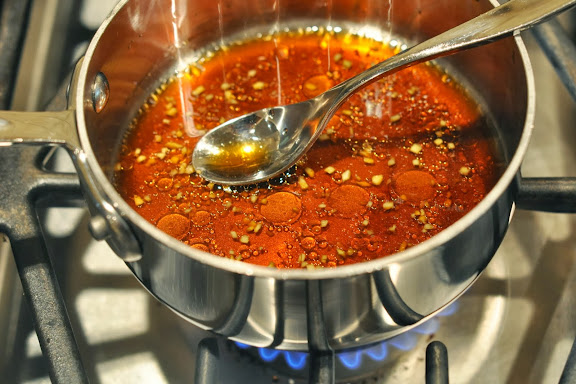 While the fish marinates, make the sauce by combining ponzu sauce (available in the Asian section of most grocery stores), minced fresh ginger, sesame oil and brown sugar. Â Bring the mixture to a boil, then simmer over low heat until the sauce thickens. Â If you’ve never had ponzu, it’s similar to soy sauce, but a lot lighter and with a bright, almost citrusy flavor that pairs really well with fish. Â The sauce may take a while to thicken to the consistency you prefer, but once it’s as thick as you like, cover the pan and keep it on the lowest possible heat so it stays warm while the fish cooks. 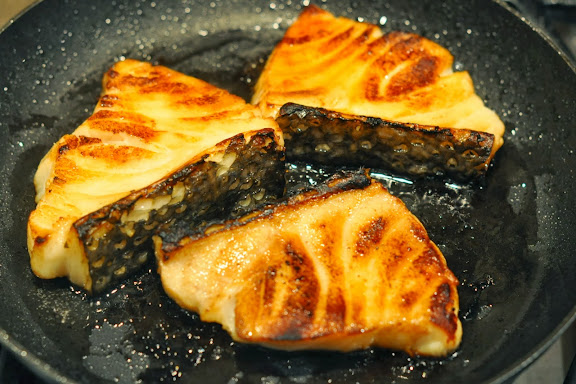 In an oven-safe skillet, heat a couple teaspoons of vegetable or canola oil until hot, then sear the sea bass until lightly browned on both sides — a few minutes per side. Â Place the skillet in the oven preheated to 350 degrees and bake the sea bass until it’s done — about 10-15 minutes, turning the fish over once halfway through the cooking process. Â You can tell the fish is done if you cut into the thickest part and it is opaque inside. Â It’s always important to be safe in the kitchen, but when cooking with a skillet in the oven, be even more mindful of the heat and keep a hot pad or kitchen towel right next to the oven so you remember to wrap the handle before you remove the skillet from the hot oven. Â I 100% take Dan’s word that it only takes one bare-handed grab of a 350+ degree handle to remember to protect yourself the next time! 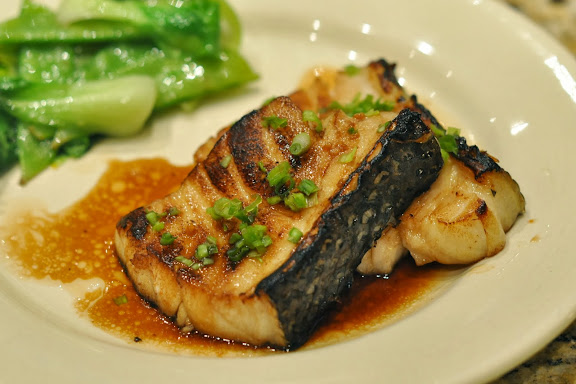 Spoon the sauce over the fish, garnish with chopped green onion tops and serve. Â Browned and slightly caramelized on the outside, flaky on the inside with savory, slightly sweet and bright Asian flavor, this sea bass is one of the best fish dishes we’ve ever had. Â I stake my fish-disliking reputation on this recipe by issuing a challenge: Â if you try it and comment here that you didn’t like it, then I will eat a piece of plain grilled salmon, without any sauce or condiments. Â This sea bass is THAT good.