When we think pork, we generally don’t also think about pork pairing well with cheese (unless of course we’re thinking about a cheese plate, in which case there better be some prosciutto on there, alongside a soft and creamy goat cheese and maybe a bit of sharp cheddar.)  But when the pork is thinly pounded and the cheese is salty/nutty grated Parmesan that forms a crispy outer coating when the pork is cooked in a skillet, pork and cheese go together pretty well after all.  We found this pork recipe in one of our most-used Cook’s Illustrated magazines, “30 Minute Suppers” (Fall 2011), and like how easy and quick the dish is to make with simple ingredients:  pork, flour, eggs, Parmesan cheese, panko, vegetable or canola oil and salt & pepper.  While not necessary, a lemon/butter or white wine pan sauce might take the pork to a whole new level (but could also take longer than 30 minutes to cook, with greater degree of difficulty if you’re not particularly gifted at making sauces.)  This basic version is perfect for a busy weeknight, and when garnished with lemon wedges, fancy enough on its own to not need no stinkin’ sauces. 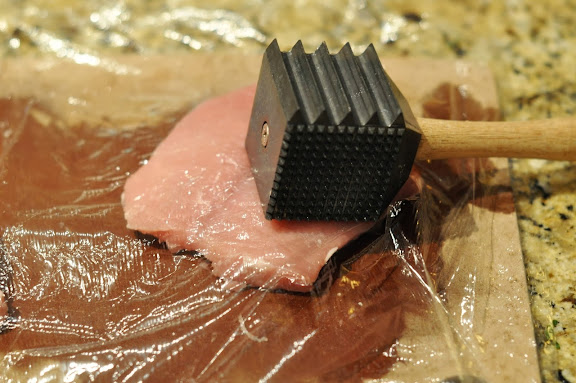 The original recipe calls for using pork tenderloin (one pound), cut into eight pieces and pounded to 1/4 inch thickness, rather than “thin-cut pork chops (which can turn out tough and leathery).”  Pro-Tip:  the folks at Cook’s Illustrated usually know what they’re talking about, what with having “America’s Test Kitchen” and doing all that recipe testing that they do.  But we went ahead and used thin-cut boneless pork chops anyway, since we didn’t want to buy an entire pork tenderloin for a single meal for just the two of us.  I wouldn’t say the pork turned out “leathery” exactly, but it was a bit more done and less juicy than we would have liked.  Next time we’ll probably use pork tenderloin (and either plan on leftovers or freeze what we don’t use for the Parmesan pork) or thicker chops. 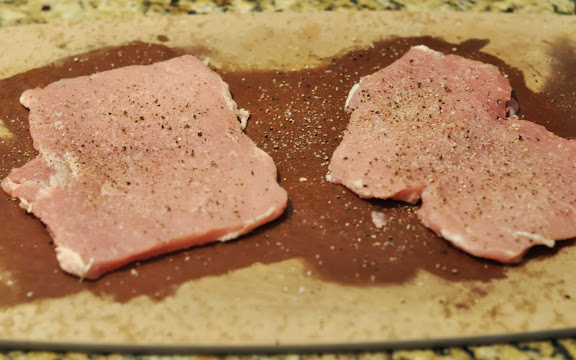 Pat the pork dry with paper towels and season both sides with salt and pepper. 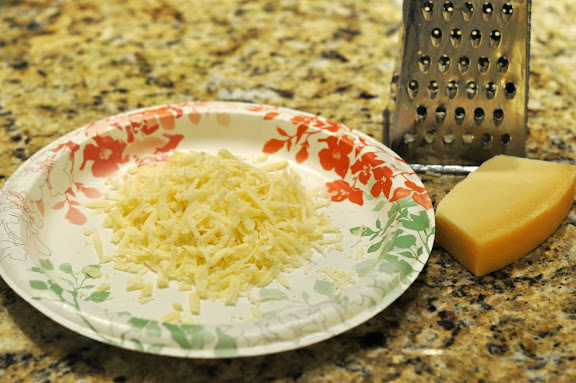 We followed the original recipe’s direction to grate the Parmesan using the large holes of the grater, in order to get bigger chunks of cheese for a thicker crust.  But then we went rogue (again) and mixed a cup of the grated Parmesan with a cup of panko breadcrumbs, rather than mixing two cups of cheese with 2 tablespoons of flour, as called for in the original recipe.  This time, our insubordination worked out well and we liked how the combination of Parmesan and panko formed a browned and crispy crust on the pork. 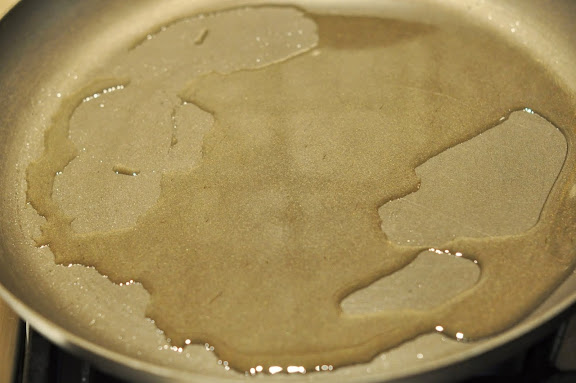 Heat a tablespoon of vegetable or canola oil (you can also use olive oil) in a large nonstick skillet over medium-high heat until simmering hot. 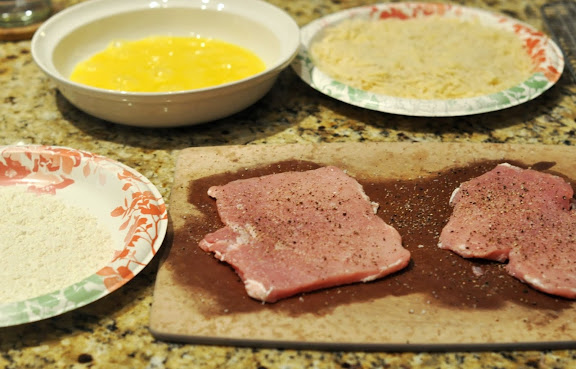 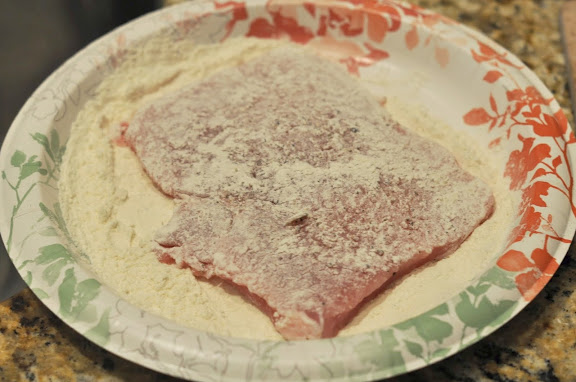 One piece at a time, lightly dredge the pork first in the flour, 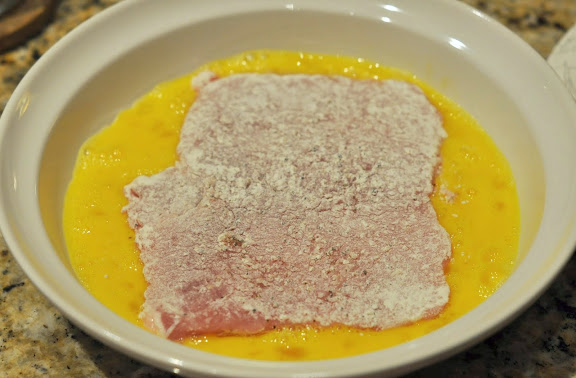 then in the egg (allow the excess to drip off), 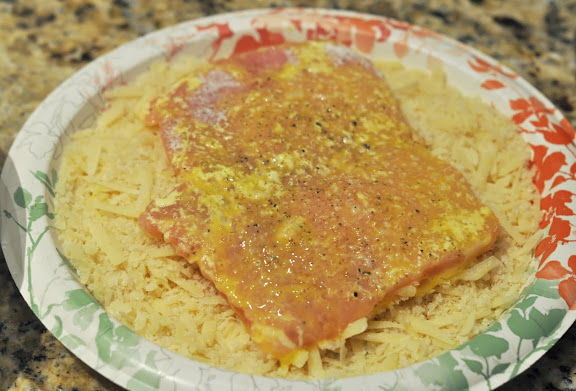 and finally in the cheese/panko mixture, pressing the mixture onto the pork so that it is well-coated on both sides. 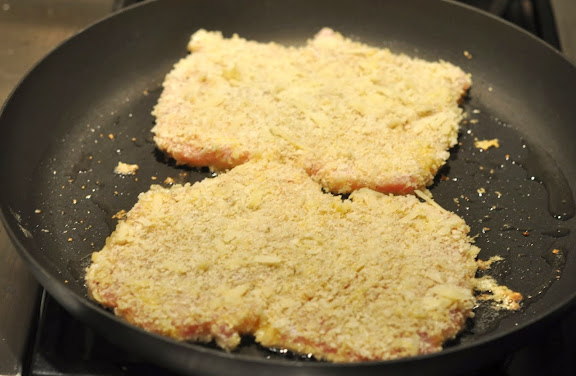 Cook the pork in the skillet until cooked through and golden brown on both sides — about 3 minutes per side.  If you are cooking a lot of pork and working in batches (to avoid overcrowding the skillet), keep the cooked pork warm on a rack placed on a cookie sheet in the oven heated to 200 degrees. 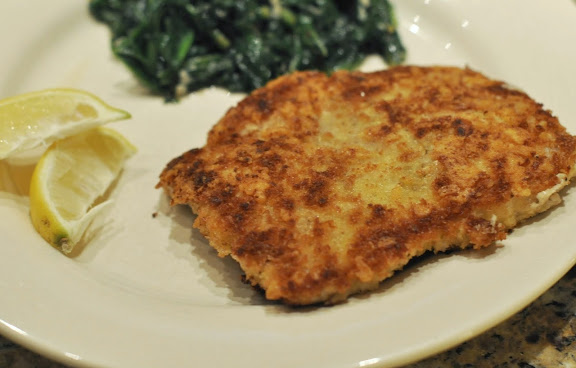 We served the pork with lemon wedges and side of garlicky broccoli rabe.  A squeeze of lemon brightened the flavors of both dishes, and a bite of both together made for a flavorful mouthful of the salty/savory pork offsetting the slightly pungent/bitter broccoli rabe.  Sometimes it’s the unexpected food combinations that are the most delicious.