Merriam-Webster defines “smorgasbord” as “a luncheon or supper buffet offering a variety of foods and dishes (as hors d’oeuvres, hot and cold meats, smoked and pickled fish, cheeses, salads and relishes).”  Mario Batali describes “Smorgasburg” as “The single greatest thing I’ve ever seen gastronomically in New York City.”  We tend to agree with Chef Batali.  Smorgasburg is a self-proclaimed “flea food market” that is open in two Brooklyn locations (Williamsburg on Saturdays and DUMBO on Sundays) every weekend during the late spring and summer.  We went to the DUMBO location on our most recent visit to see family in Brooklyn and absolutely loved it.  At either location, you will find a collection of around 75-100 food vendor enthusiasts (we say “enthusiasts” because the vendors are nothing but passionate about their craft and the amazing food they offer) selling a huge variety of both freshly prepared and packaged/preserved delicacies.  Smorgasburg offers something for everyone, no matter what kind of food you’re in the mood for:  there are several vendors with Asian fare (noodles, Chinese lumpia pastries, kimchi); Italian offerings (“Sunday gravy,” porchetta, pizza); Mexican specialties (tacos and cemitas); American “comfort food” options (fried chicken, burgers, grilled cheese, BBQ); seafood selections (lobster rolls, fried fish, oysters); and sweet treats (frozen chocolate-covered bananas, cookies, ice cream, cheesecake) — just to name a few.  If you’re fortunate enough to be in the Brooklyn area this summer, we highly recommend Smorgasburg.  Go early (lines get long), bring a picnic blanket (the main “seating” at the DUMBO location is a grassy area along the waterfront), invite friends (more people in your group means more tasting of more food) and just try to leave there without eating at least one thing that is the best version of that thing you’ve ever had. 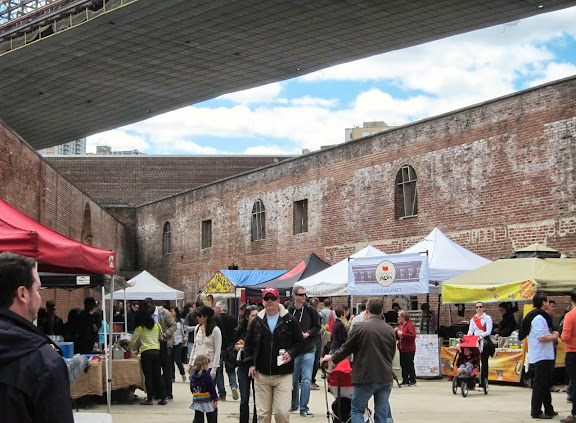 “DUMBO” stands for Down Under the Manhattan Bridge Overpass, and refers to a neighborhood — you guessed it — located under the Manhattan and Brooklyn bridges.  On Sundays, Smorgasburg is held in the historic Tobacco Warehouse:  the remains of a brick structure built in the 1870s as a center for inspections of — guess again — tobacco.  Smorgasburg vendors set up inside the open-air structure, where it can be a bit overwhelming to figure out what you want to eat amidst so many mouthwatering choices.  It’s a good idea to peruse the list of vendors ahead of time, to help you decide and come up with a plan of attack.  And again, it helps to have multiple people in your group — one person can hold down the picnic spot while others divide and conquer the food lines.  If you plan on getting BBQ, go there first.  We made the mistake of waiting until a bit later in the day and the line was at least 50 people deep. 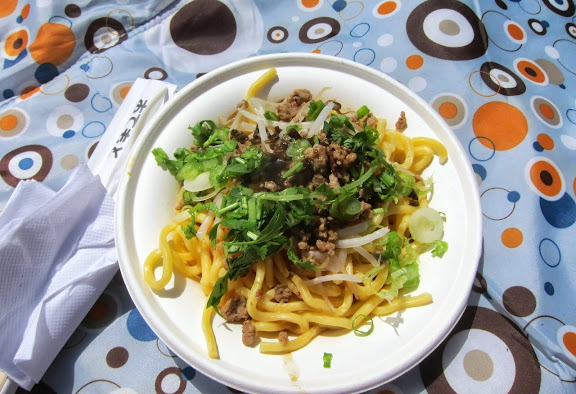 Instead of BBQ, we started with Asian food:  the dan dan noodles with sauteed minced pork, bean sprouts, scallions and a savory sauce with a spicy kick.  Very tasty. 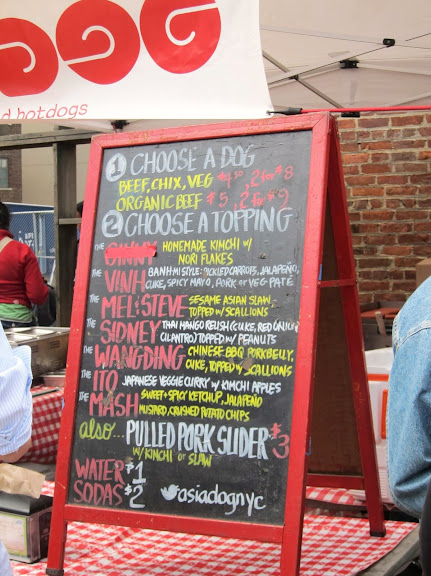 Asian flavors + hot dogs = love.  I didn’t get a good photo of the “asiadogs,” but they were one of our favorite bites of the day.  Both the “Vinh” (banh-mi style, with aioli, pate, cucumbers, pickled carrots & daikon, cilantro and jalapeno) and the “Mel & Steve” (with sesame Asian slaw) were delicious. 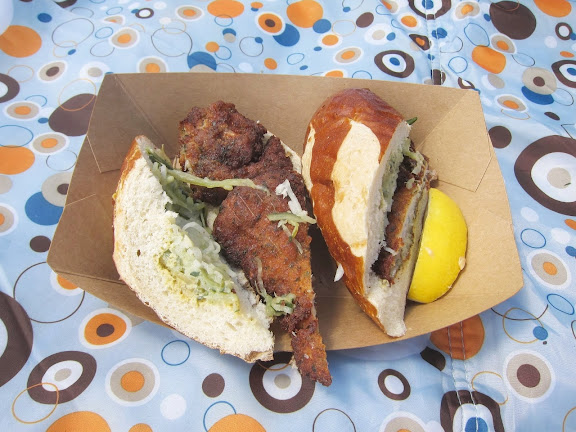 Another favorite of the day was the schnitzel — thin strips of chicken (or pork, or veal) that are breaded, fried, topped with a flavorful (but not overwhelming) combo of pickled veggies and caramelized onion mustard, and served on fresh pretzel bread.  We could have only eaten these all day and been more than satisfied. 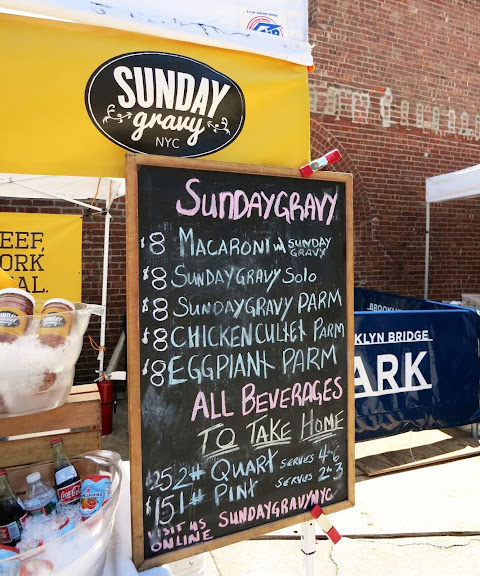 But, it being a beautiful Sunday afternoon, how could we not try the offerings of a vendor named “Sunday Gravy?” 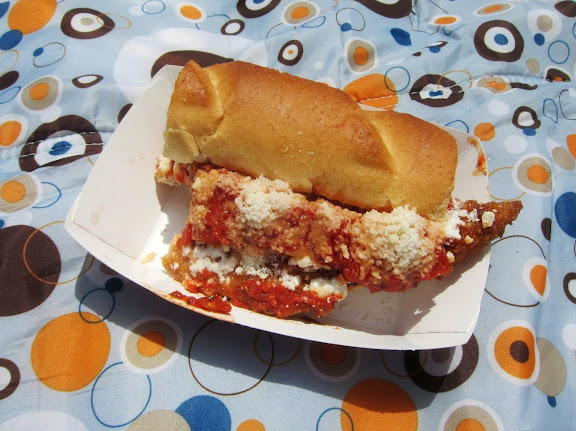 As big fans of all manner of red sauces, we also tend to be snobs about which ones we declare to be among the best.  According to their website, Sunday Gravy’s sauce is “a slow braise of succulent beef and pork, sausage and meatballs, simmered with plum tomatoes, garlic and basil.”  Among the best?  Yes, indeed.  And better yet — you can buy jars of the sauce online. 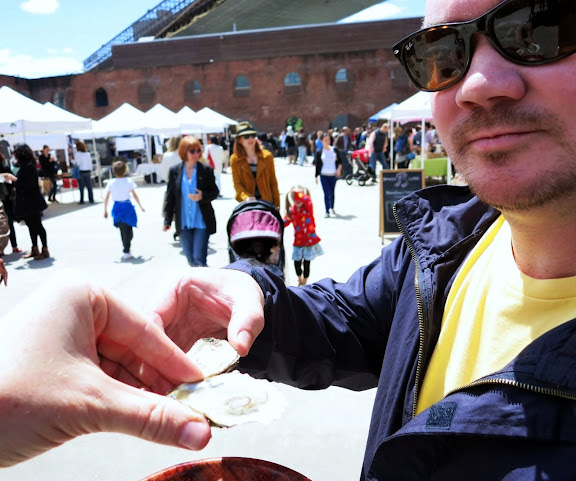 Dan and his brother share a palate-cleansing, oyster-cheers during one of their food runs.  Briny goodness. 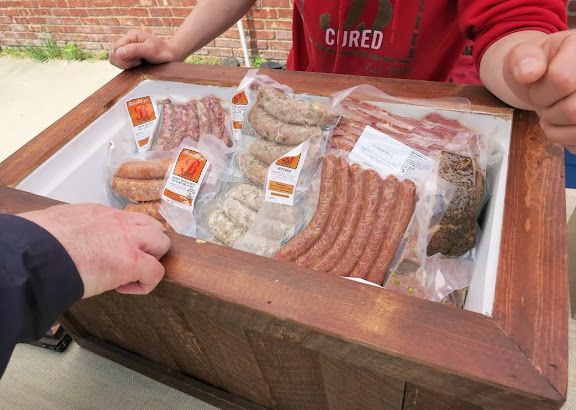 In addition to cured meats, other packaged foods available at Smorgasburg include pickled veggies, various jams and jellies, flavored horseradishes, hot sauces and sweet syrups, among many more. 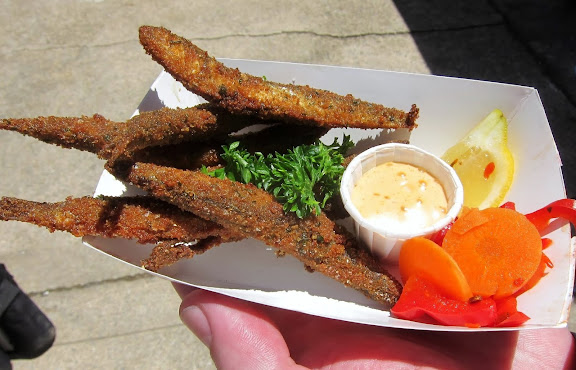 Among the more unusual vendors at Smorgasburg was the booth offering fried anchovies.  We had to try them (particularly after I saw the little girl ahead of us devouring hers), and they were good, but a little too fishy-tasting for me.  (Yes, I am aware — and was at the time — that an anchovy is actually a fish.) 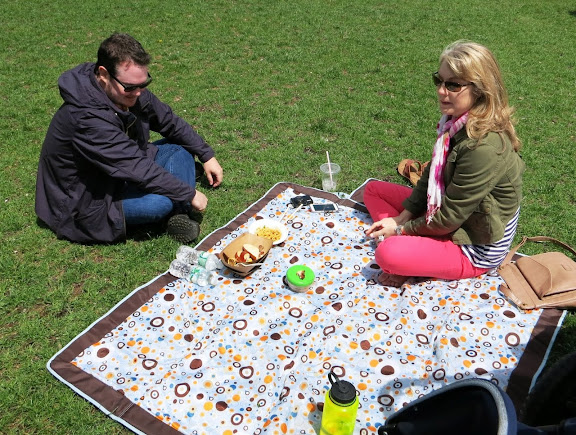 A rare sighting of Mr. and Mrs. Foodie Lawyer in their vacation habitat, exhibiting their customary behavior of digesting food while preparing to eat more food. 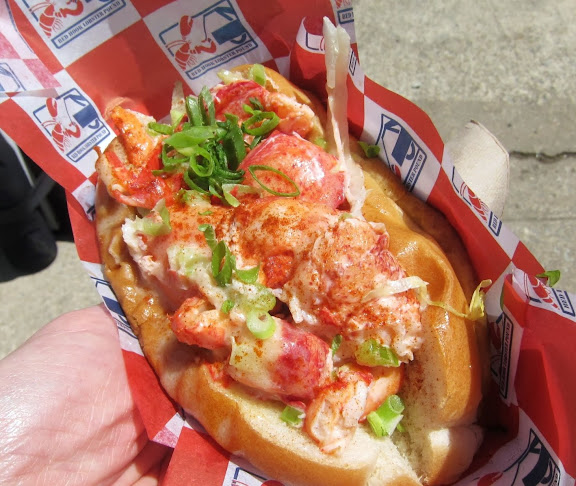 When Dan is within a 50-foot radius of lobster, he will find it and eat it.  No matter how much other food we consumed that day, we would not have missed the lobster roll.  It does not get much better than perfectly steamed, plump chunks of lobster, lightly dressed with homemade mayo, garnished with celery and scallions and served in a buttered split-top bun.  Heaven. 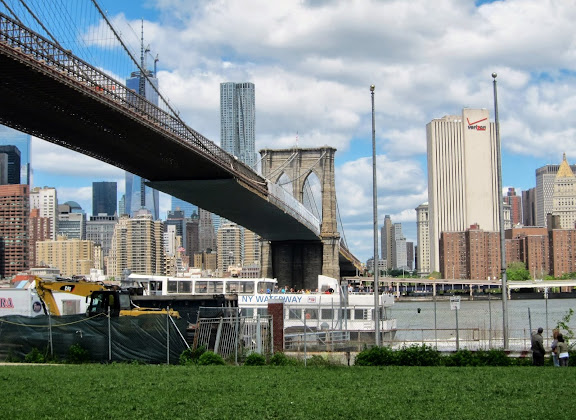 Nor does it get much better than enjoying a huge variety of amazing food, while lounging on a picnic blanket in a beautiful park overlooking the river and the NYC skyline, and spending time with some of our favorite people.  Sunday at its best!  Smorgasburg, we will be back.  Fried chicken, you have been warned.