And now for something completely different — breakfast for dinner!  “Strata” typically refers to a layered brunch casserole made with day-old bread, eggs, cheese and milk, put together hours in advance and resulting in a final dish that resembles a savory bread pudding.  We’ve never made strata before and thought it sounded pretty complicated, especially for a weeknight dinner.  But we found a recipe from one of our old favorite cookbooks, “The Best 30-Minute Recipe” that simplifies the process without sacrificing any of the flavor or the delicate-yet-hearty structure.  The ingredients are simple — bacon, onion, eggs, milk, cheese and bread — and can vary depending on what kind of strata you want to make, which is another reason to love this recipe.  Once you have the technique for building and cooking a successful strata, you can modify the flavors and ingredients to suit your preferences and pantry.  For example, you could use sausage instead of bacon.  Or use leftover steak and add green chiles for a migas-style strata.  Leave out the meat altogether and add mushrooms and spinach for a hearty vegetarian strata.  There are tons of possibilities for this versatile meal, not just in terms of ingredients, but also timing — served as breakfast, lunch or dinner, it’s a tasty, filling and satisfying dish that is easy to make, easy on the eyes and pleasing to the palate. 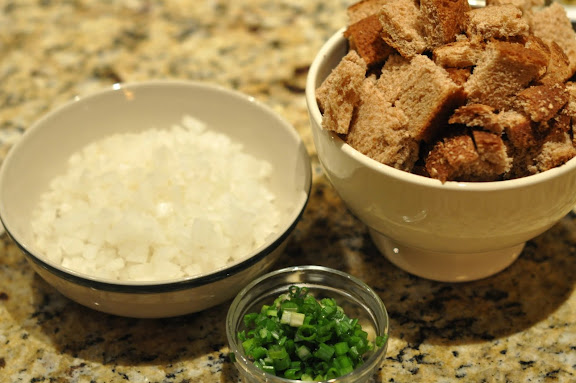 Start by prepping the ingredients — finely chop an onion and 2-3 green onions (green parts only) and cut 5 slices of bread into about 1 inch pieces.  We used wheat bread, but white would also work — just make sure that it’s good quality bread. 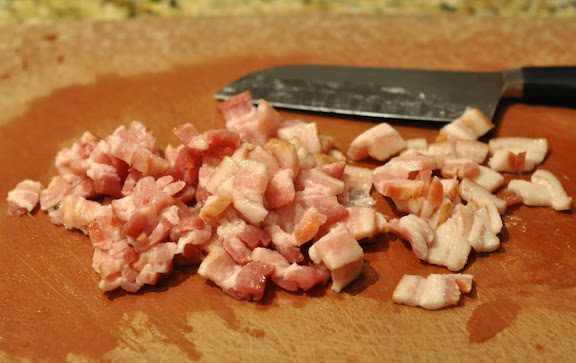 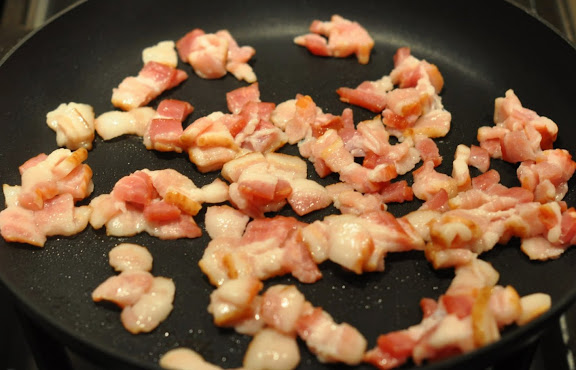 Heat a 10 inch (smaller than you would expect to use, but trust – it works), oven-safe, nonstick skillet (Scanpan makes great ones) over medium-high heat, add the bacon and cook until the fat begins to render — about 2-4 minutes. 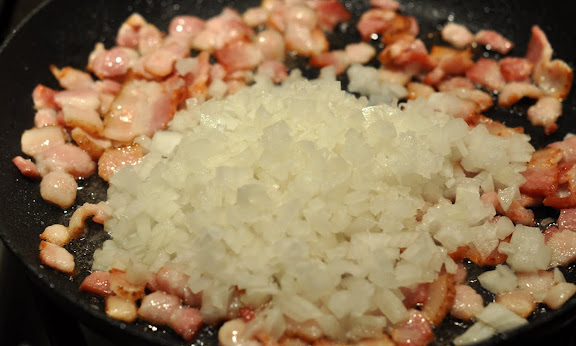 Add the onion and a dash of salt to the skillet and cook until the bacon browns and the onion softens — about 6-8 minutes.  (If you aren’t using meat in your strata, heat some butter or olive oil for cooking the onion and any other veggies you’re using.) 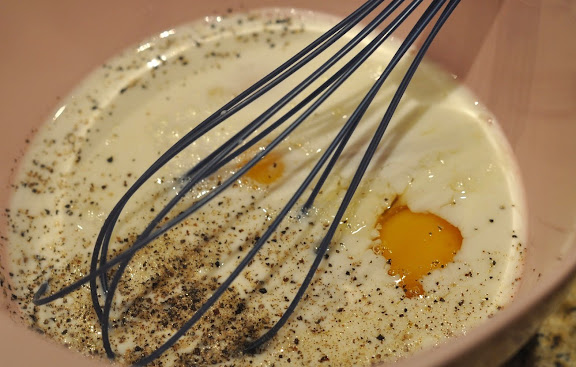 Whisk together 6 eggs, 1 1/2 cups whole milk and salt & pepper in a large bowl.  Then stir in 1-2 cups of grated cheese.  We used pepper jack cheese on this night, but many other types of cheese would be equally delicious. 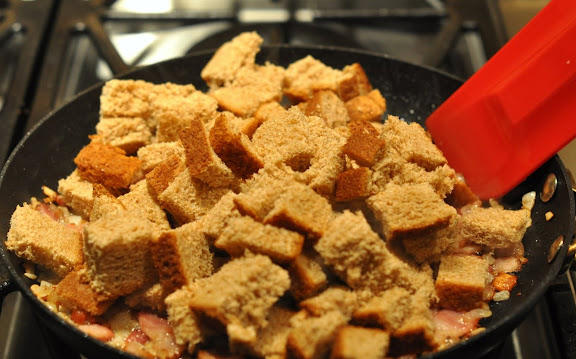 Add the bread to the skillet and use a rubber spatula to gently fold it into the onion and bacon mixture.  We’ll be honest and admit that we did not expect all the bread to fit in the skillet, but it did (I still can’t believe it.) 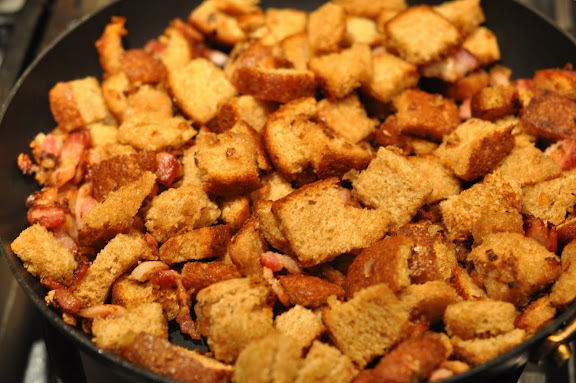 Cook the bread, gently folding over occasionally, until it is lightly toasted — about 3-4 minutes. 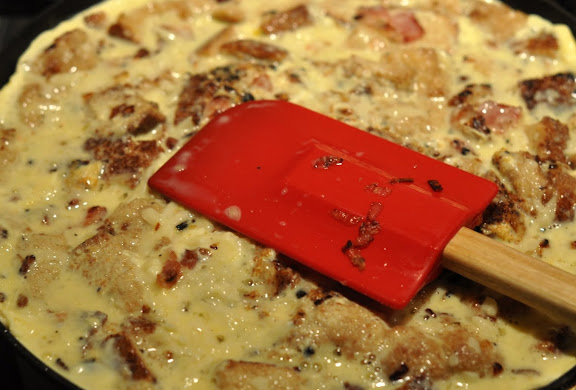 Take the skillet off the heat and add the egg mixture, gently folding it in until well combined with the bread, onion and bacon.  Being even more honest, we didn’t think there was a chance in heck that 6 eggs, plus milk and cheese would fit in the skillet with all the other ingredients, but **spoiler alert** it all fit just fine.  Use the spatula to press down the ingredients and help the bread soak up the egg mixture. 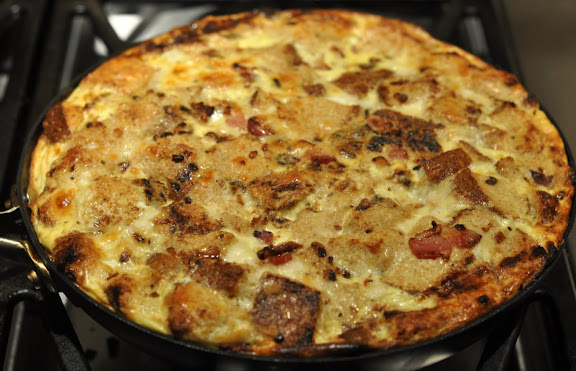 Place the skillet in the oven preheated to 425 degrees and cook until the center puffs up a bit and the edges begin to pull away from the sides of the pan — about 10-12 minutes. 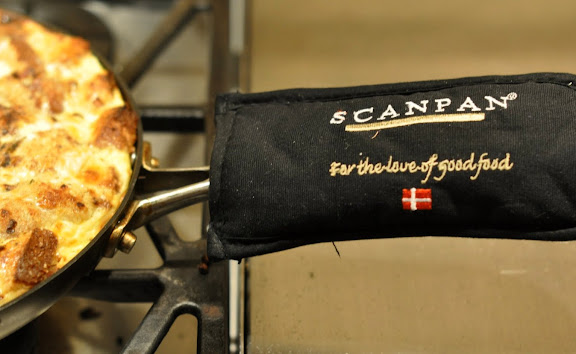 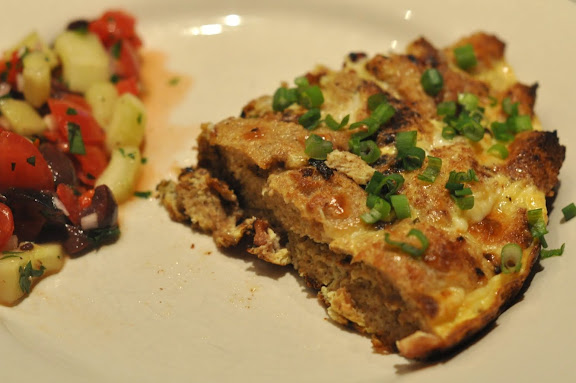 Garnish with chopped green onion and serve.  We served the strata with a cucumber tomato salad to add fresh flavors and textures and make the meal feel more like dinner than breakfast (serving a nice cab sav with it also helped.)  We enjoyed our breakfast/dinner (“Brinner?”) very much and will make strata again when we need a break from the usual weeknight routine.