We’ve made orecchiette with broccoli rabe before, and enjoyed it as a quick and healthy vegetarian meal.  Broccoli rabe (also known as “rapini”) is a leafy green packed with nutrients, including calcium, vitamins A, C and K, potassium and folate, just to name a few.  It’s known as one of the most nutrient-dense foods on the planet.  So why not negate all that nutrition by adding sausage to your rapini dish?  The Italians do it, so that is good enough for us.  Of course — even with the sausage — you still receive all the health benefits of broccoli rabe, and the method of roasting the sausages according to Ina Garten’s recipe in her book “Foolproof” makes them seem at least a little less unhealthy.  Adding the sausage and a tomato sauce elevates this pasta dish in terms of both flavor and texture, and makes it a lot more appealing (to us anyway) than the vegetarian version.  We still appreciate the meat-less meal, but really like the addition of sweet tomato to counter the somewhat bitter rapini flavor.  We’re also curious to try a version using turkey sausage sometime, to keep the dish a bit more on the healthy side, without sacrificing the meaty component.  But when in the mood for a hearty, comfort-food meal that we would imagine an Italian grandmother making, this recipe is the way to go. 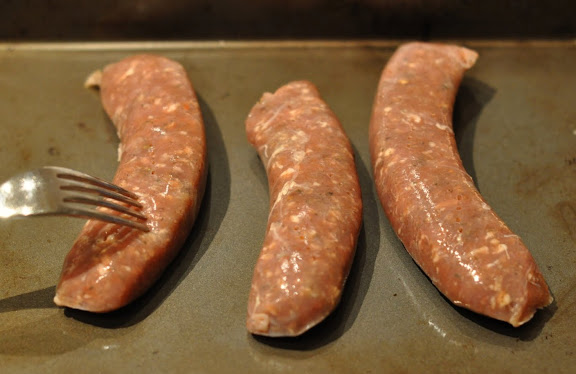 The original recipe calls for equal amounts of hot and sweet Italian pork sausages.  Since this was our first time to make this dish, we decided to use 2 sweet sausages and 1 hot because we didn’t want the other flavors to be overwhelmed by too much spice.  Use a fork to prick holes in the sausages in several places (in order to allow some air to escape while they cook), place them on a cookie sheet and roast in the oven preheated to 350 degrees, turning the sausages over halfway through the cooking time, until the sausages are barely cooked through — about 15-20 minutes. 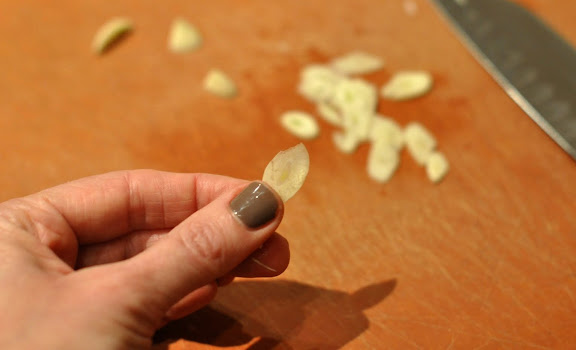 While the sausages cook, prepare the other ingredients.  Peel, then slice 3 cloves of garlic very thin. 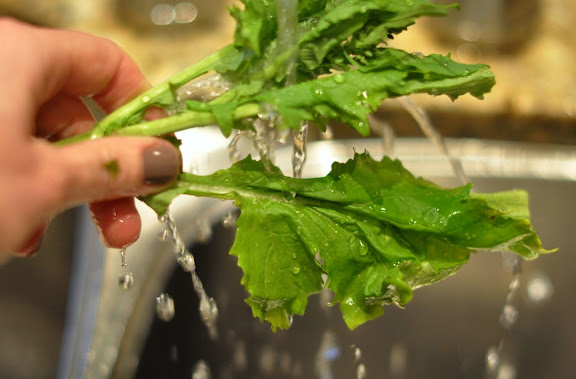 Wash the broccoli rabe (1 bunch total), then trim the leaves off the stems and discard the stems. 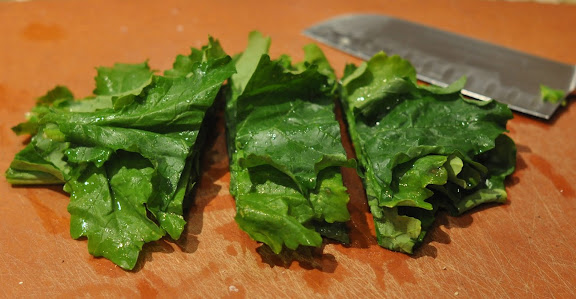 Stack the broccoli rabe leaves and cut them crosswise into 2-3 inch pieces. 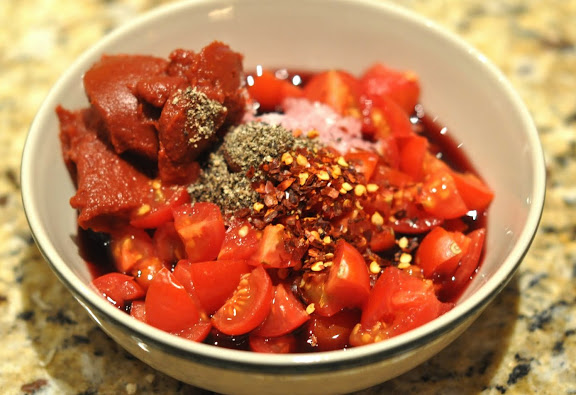 Combine the tomatoes, 2 tablespoons tomato paste, 1/4 cup red wine, 1 teaspoon salt, 1/2 teaspoon pepper and red pepper flakes in a small bowl.  The original recipe calls for using a 14.5 ounce can of crushed tomatoes (preferably San Marzano or the highest quality you can get.)  We made this dish during late fall, when we still had an abundance of fresh tomatoes from our garden, so we used about 1 1/2 cups of chopped fresh tomatoes instead of canned.  We also went off-recipe by adding about 1/4 teaspoon of red pepper flakes to spice up the sauce a bit. 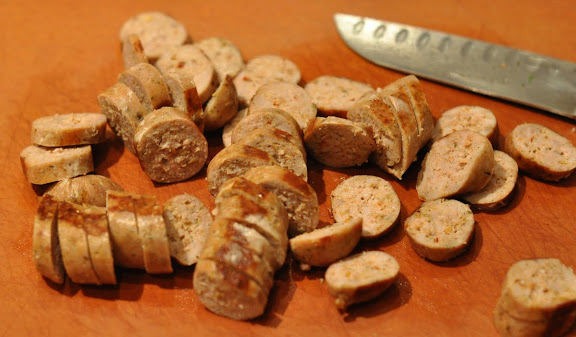 When the sausages are cooked through, cut them into 1/2 inch pieces. 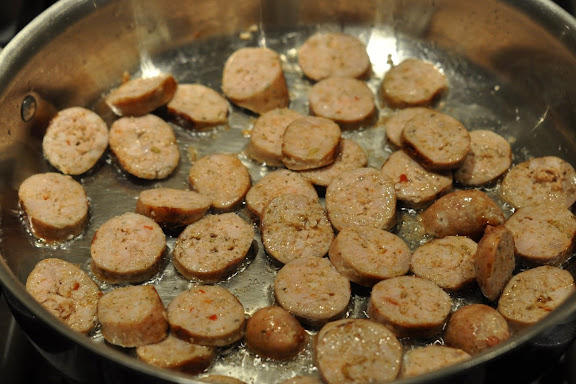 Heat a couple tablespoons of olive oil over medium heat in a large skillet or Dutch oven, add the sausage slices and saute, stirring often, until browned on all sides — about 5-7 minutes. 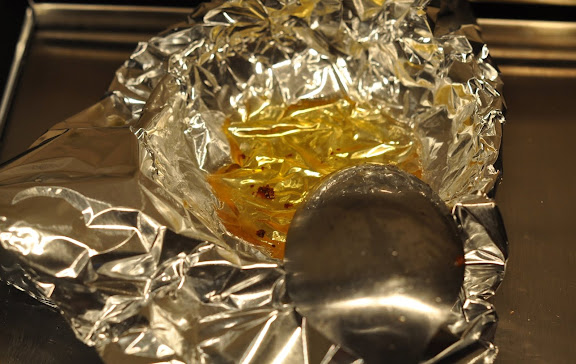 The sausages rendered more fat than we wanted to use, so we spooned some of it out of the skillet (to discard after it cooled.) 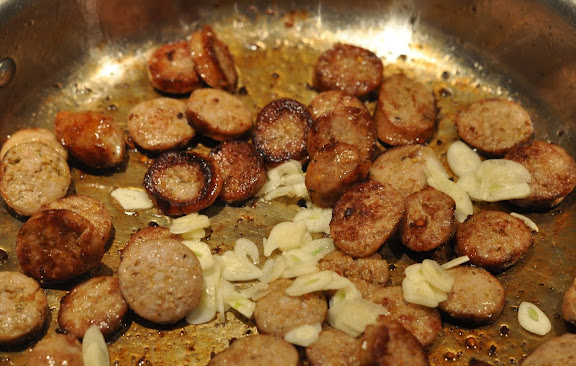 Add the garlic to the skillet with the sausage and cook for about 1 minute. 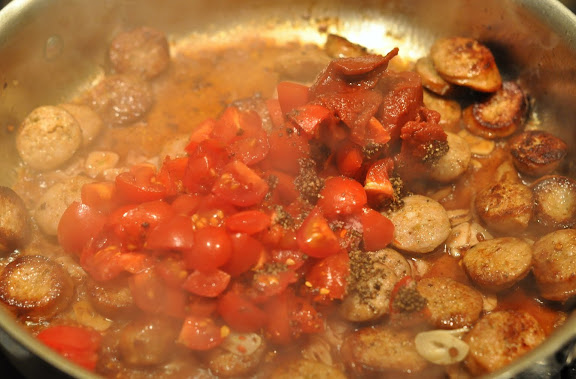 Add the tomato mixture to the skillet and simmer over low heat. 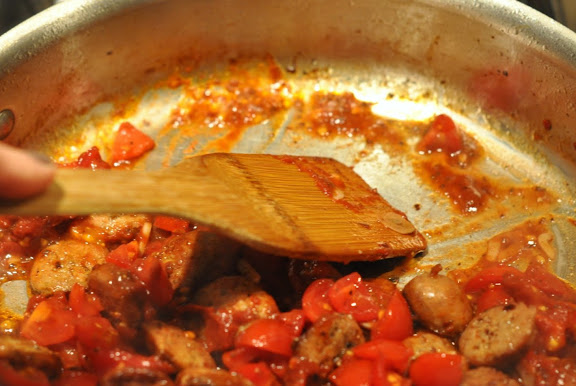 Use the liquid from the wine and tomatoes to scrape up any browned bits from the bottom of the skillet.  Keep an eye on the sauce as it simmers and add a little more red wine if the sauce begins to get too dry. 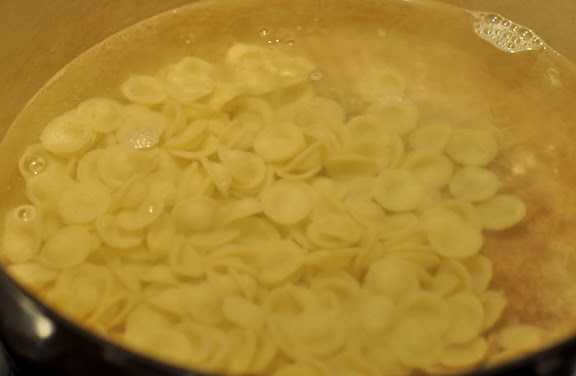 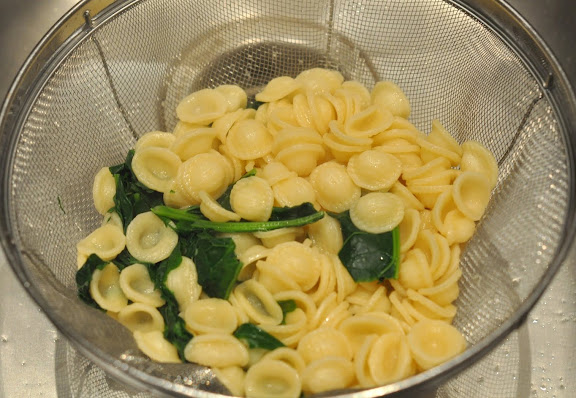 Drain the pasta and rapini, reserving about 1/2 a cup of the cooking liquid to add to the finished dish as needed. 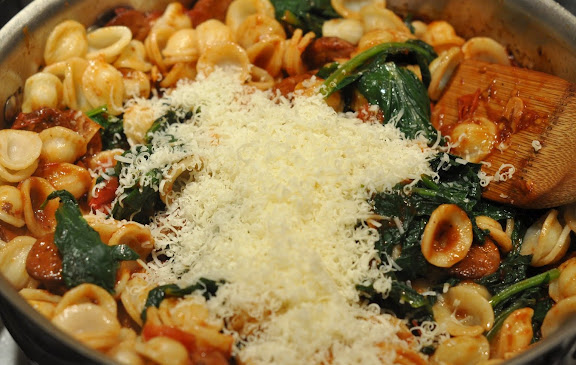 Add the pasta and broccoli rabe to the skillet with the sauce (add in batches — we didn’t end up using all the pasta, but made sure to add all the rapini), then stir in about 1/2 cup of grated Parmesan cheese and a dash of salt.  Stir it all together and add some of the reserved pasta water if the sauce seems too dry. 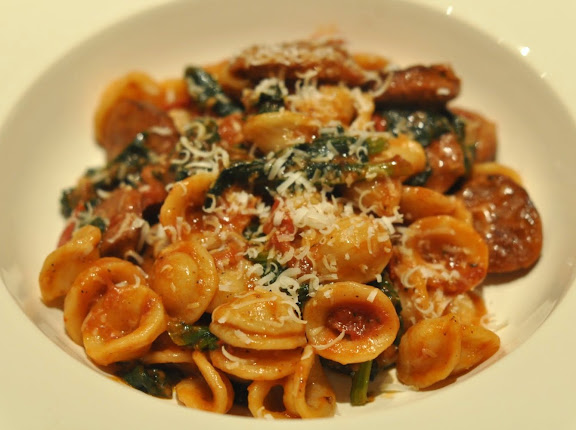 Garnish with a little more grated Parmesan cheese and serve.  Adding sausage may make this dish a little less healthy, but it still includes a generous dose of a powerful veggie Super Food, which is a trade-off we are more than happy to make on occasion.