We make (and eat) soup year-round, but appreciate it most during colder months, especially when it’s a soup that involves homemade broth and takes time to simmer away on the stove.  This is not a quick and easy weeknight meal, but it’s perfect for a lazy Saturday or Sunday when your most pressing concerns are making this delicious soup, tending a fire in the fireplace, and maybe finding a good TV show or movie to watch while the soup cooks.  The key to this soup is the homemade beef stock, recommended in the original recipe found in  Cook’s Illustrated’s book, “The Best Recipe:  Soups and Stews.”  You could probably make beef barley soup with store-bought beef stock, but simmering the meat and bones with onion, red wine and water for several hours creates a rich and meaty broth far superior to the stuff available at the store.  So if you have the time and inclination, homemade beef stock is worth the effort for this hearty, beefy soup. 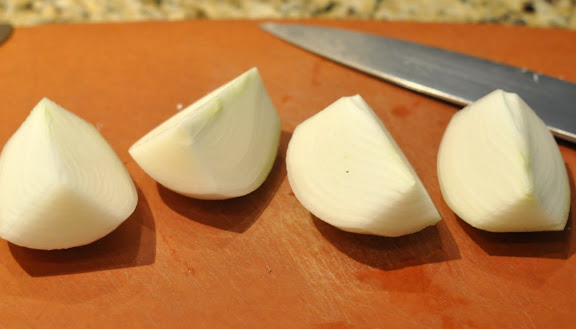 First things first, make the beef stock.  Peel an onion and cut it into quarters. 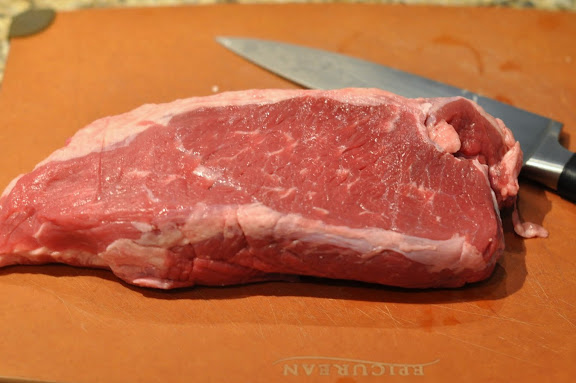 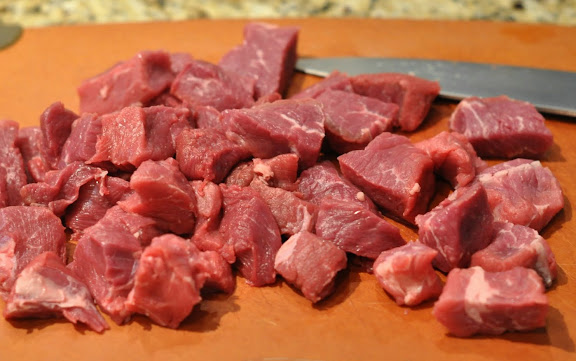 Trim the visible fat from the beef chuck and cut the beef into 3-inch chunks.  It takes a lot of meat to make a flavorful stock, but you’ll only end up using about half of the cooked beef for the soup.  Yet another reason to make homemade beef stock — you’ll have leftover beef to use in another dish or for sandwiches. 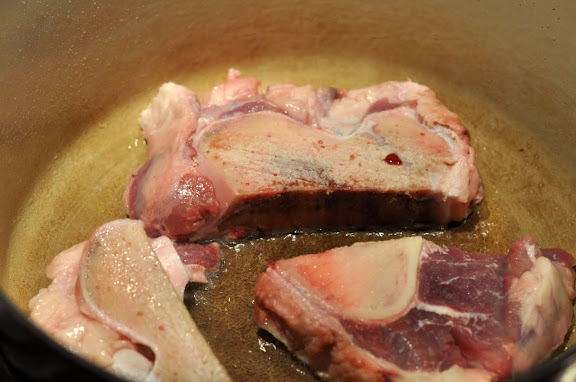 Heat 1-2 tablespoons of vegetable or canola oil in a large stockpot or Dutch oven over medium-high heat to brown the meat, bones and onion, working in batches to avoid over-crowding the pot.  We started with the bones, browning them on all sides, then setting them aside on a platter. 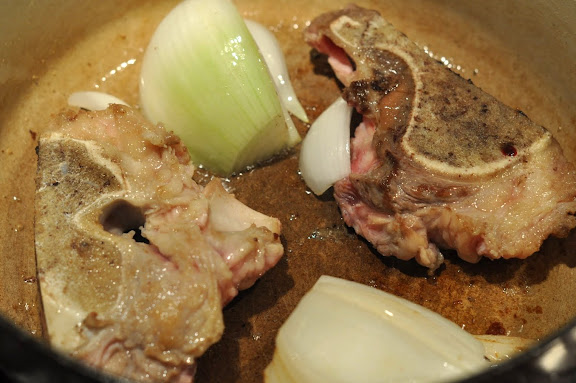 Our next batch included the remaining bones and half of the onion.  Add more oil to the pot as needed. 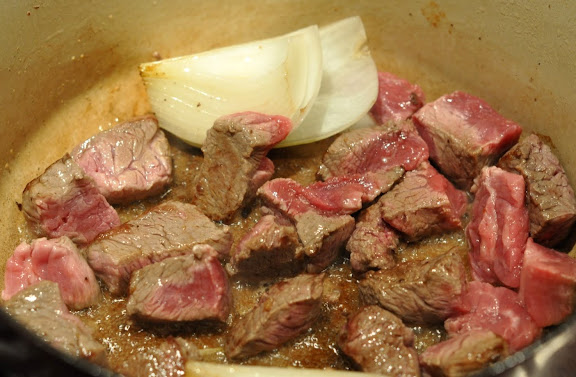 Then we browned the beef chunks and the rest of the onion.  Set all the browned meat, bones and onions aside on a platter. 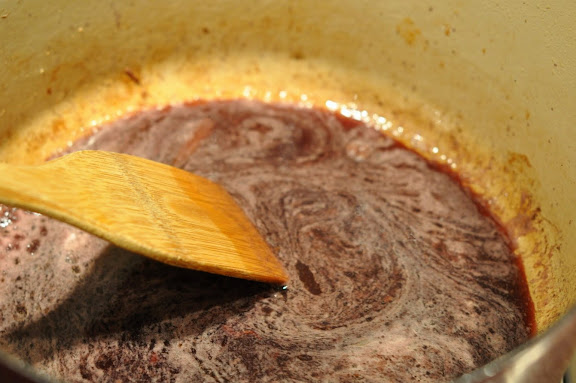 Add 1/2 cup dry red wine to the now-empty Dutch oven and cook, scraping up any browned bits from the bottom, until the wine reduces and thickens — 3-4 minutes. 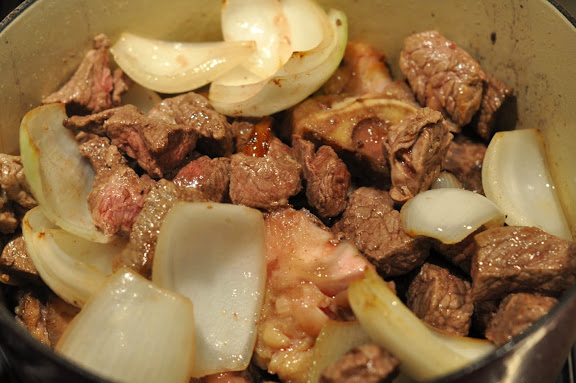 Return the meat, bones and onion to the Dutch oven.  Reduce the heat to low, cover the pot and cook until the meat releases dark juices — about 20 minutes. 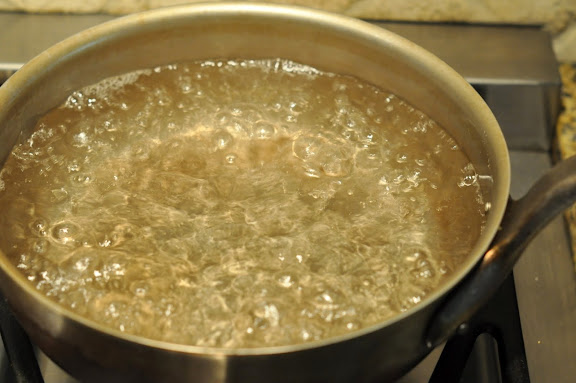 While the meat cooks, bring 2 quarts of water to a boil in a separate pot. 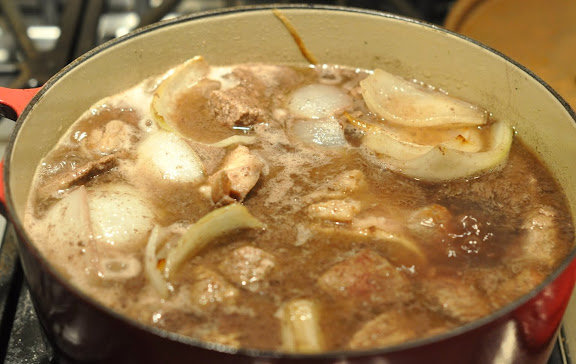 Increase the heat under the Dutch oven to high, then add the boiling water and 2 teaspoons salt to the pot.  Bring the stock to a simmer, partially cover the pot and simmer over low heat until the meat is tender — about 2 hours. 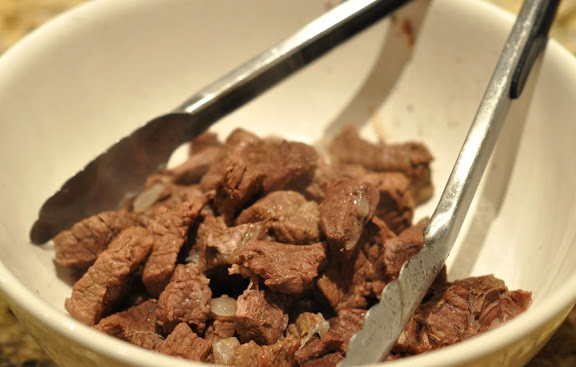 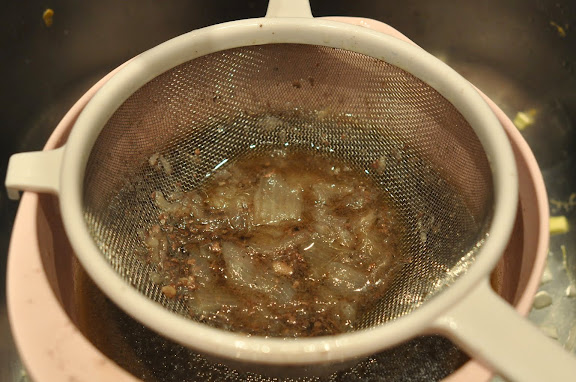 Strain the stock through a fine-mesh strainer into another large bowl (don’t forget to place the bowl under the strainer, or your 2+ hours of hard work will literally go down the drain!  Surprisingly, I’ve never actually forgotten the bowl, although I am always terrified that I will.) 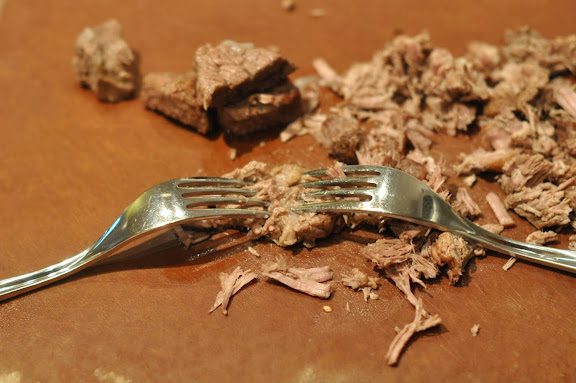 Once the beef cools, portion half of it (about 2 cups worth) for the soup and half to save for later use.  Use forks to shred the soup beef into small pieces. 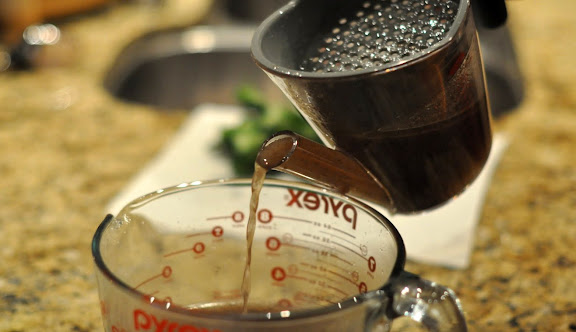 You’ll want to de-fat the stock before using it in the soup.  If you have time, refrigerate the stock for several hours, until the fat rises to the surface and congeals, then spoon the fat off the surface and discard.  If you don’t have time to cool the stock, pour the stock through a gravy skimmer into another container until you see the layer of fat left on the bottom of the skimmer. 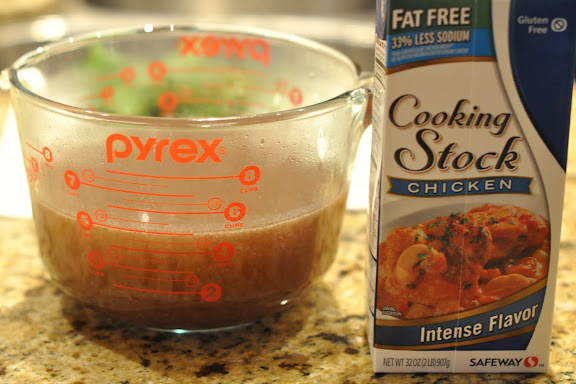 Once the fat was removed from the stock, we measured the stock and discovered we did not have the 2 quarts of stock required for the soup recipe, so we supplemented with chicken stock we already had in the pantry.  You could also supplement with store-bought beef or vegetable stock, or even water, if you don’t have any other stock on hand. 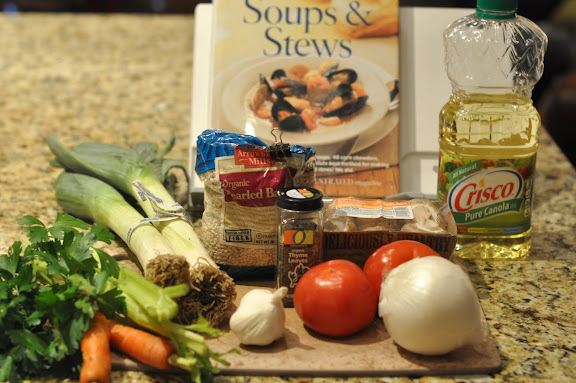 Now for the soup.  In addition to 2 quarts of homemade beef stock and 2 cups shredded beef, the ingredients include:  vegetable oil, 1 onion, 2 carrots, 1-2 ribs of celery, 2-3 leeks, an 8 ounce package of mushrooms, 1/2 cup diced tomatoes, 2-3 cloves minced garlic, 1/2 teaspoon dried thyme, 3/4 cup pearl barley, salt & pepper and parsley for garnish.  You can start some of the soup prep while the beef and beef stock cook and cool, or you could even make the beef stock up to 3 days before you plan to make the soup.  If you make the stock ahead, store it in the fridge until you are ready to use it in the soup. 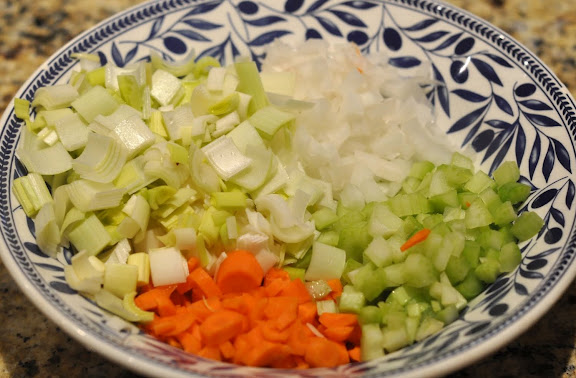 Chop the onion, carrots, celery and leeks (white parts only.)  The original recipe only called for onion and carrots, but we researched a few other recipes that used celery and/or leeks and decided they would add nice flavor and texture to the soup. 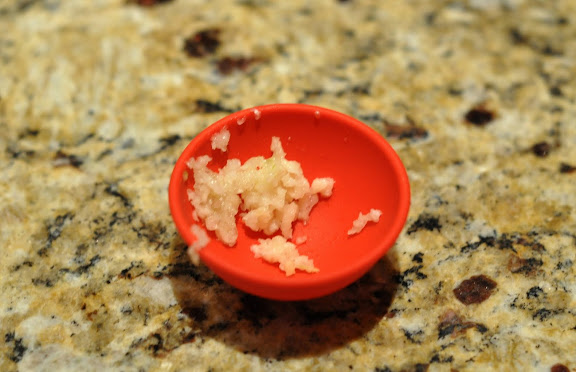 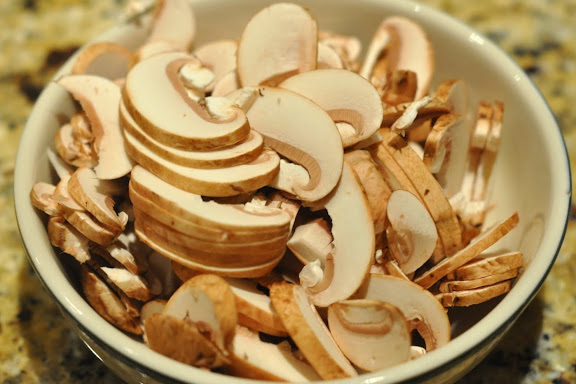 Use a moist paper towel to clean the mushrooms (baby bell, cremini or button mushrooms), then remove and discard the stems and thinly slice the mushroom caps. 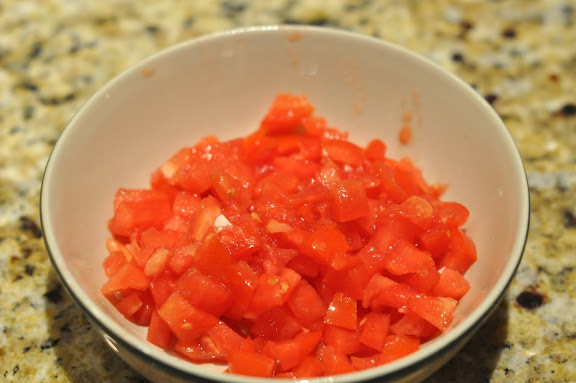 The original recipe called for 1/2 cup of drained, diced canned tomatoes, but we used fresh tomatoes since we had them on hand.  Slice the tomatoes in half and remove the seeds (removing the seeds also removes much of the tomato’s inner liquid, since the recipe calls for drained tomatoes), then chop them into small pieces. 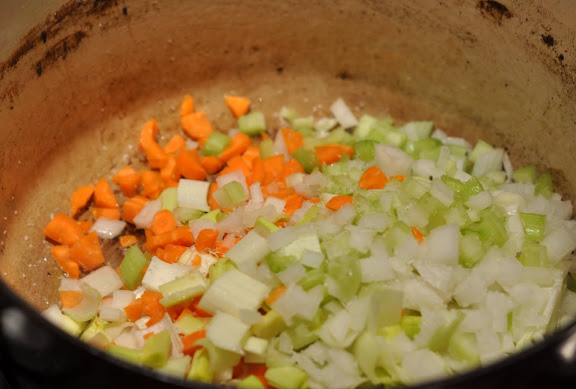 Heat a tablespoon of oil in a large stockpot or Dutch oven (you can use the same one you used to make the beef stock), add the onion, carrot, leeks and celery with a dash of salt and cook over medium-high heat until the veggies begin to soften — about 6-8 minutes.  Add the garlic and cook until fragrant — about 1 minute. 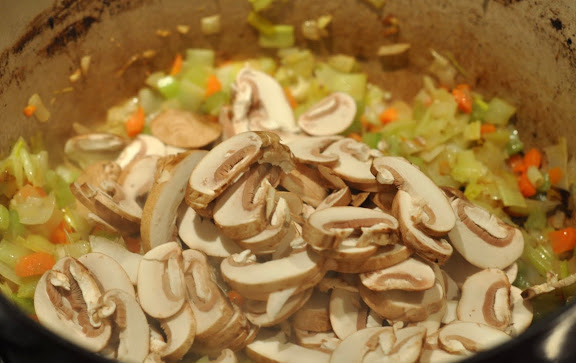 Add the mushrooms and cook until they soften and the liquid they release cooks off — about 5-6 minutes. 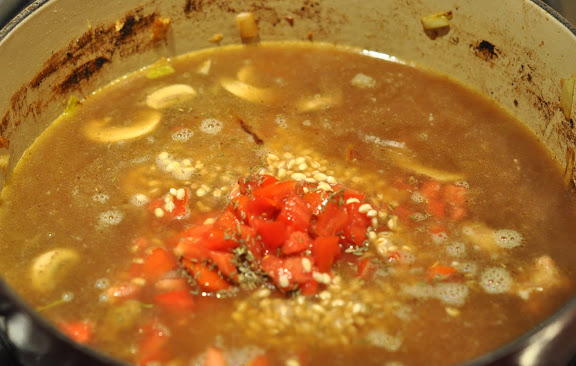 Add the thyme, tomatoes, beef stock, shredded beef and barley to the pot.  Bring the soup to a boil, then reduce the heat and simmer until the barley is tender — about 45 minutes.  Taste and add salt & pepper as needed. 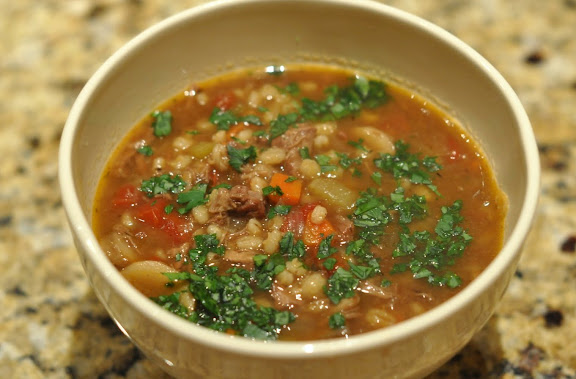 Garnish with chopped parsley and serve.  Yes, this recipe is rather complex and involves a lot of steps.  But, the steps are not particularly difficult or challenging.  Sure, you could save some time and steps by using store-bought beef stock.  ABSOLUTELY, homemade beef stock is worth the extra time, steps and effort to add rich, layered flavor to this delicious soup.

For the beef stock:

For the beef stock: