This fish dish is more technique than recipe.  Mastering a few cooking techniques can really broaden your kitchen repertoire, perhaps more so than solely focusing on trying new recipes.  Although I unfortunately couldn’t find the exact quote, Dan recalls hearing or reading an assertion from Chef Michael Symon concerning the importance of technique:  Learn a recipe and you can cook 1 dish.  Learn a technique and you can cook 100 dishes.  Chef Symon’s premise rings true with this method of cooking fish.  The first time we made it, we used this recipe from Ina Garten.  We’ve made it about 4 different times now, varying the flavors and ingredients each time, but always achieving perfectly-cooked and delicious fish.  The key is wrapping the fish (and whatever herbs or seasonings you want and/or thinly sliced veggies) drizzled with a little olive oil into a parchment-paper-package and baking it in the oven until the fish is cooked through — about 12-15 minutes (the perfect cooking time for this dish in our oven appears to be exactly 13 minutes.)  And aside from being a foolproof method for properly cooking fish, the parchment package is an interesting way to serve the fish — almost like a present on a plate. 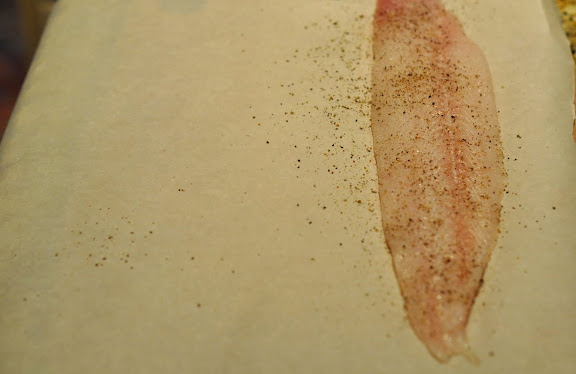 Tear off a large sheet of parchment paper and place the fish near one of the edges, leaving several inches of parchment between the fish and the edge, which will eventually get folded up under the fish.  Season the fish with salt and pepper.  (The first time I made this, I seasoned both sides and it was a little too salty.  Rookie mistake.)  We used Dover sole fillets the first time, but have since made this dish with thawed tilapia fillets that we almost always have on hand.  Pretty much any thin, boneless fish fillet will work (the original recipe recommends snapper or cod.) 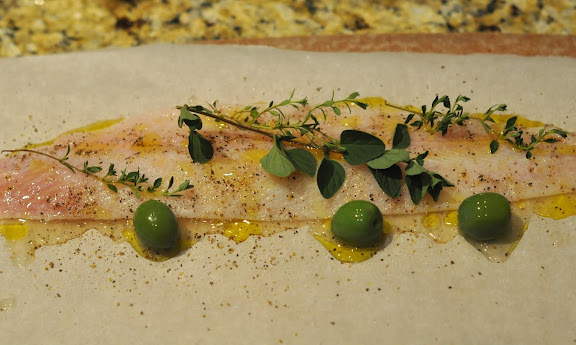 Drizzle each fish fillet with about a tablespoon of olive oil and a tablespoon of lemon juice.  Place a couple of fresh herb sprigs on the fish (we used thyme and oregano this time) and add few large green olives (the original recipe suggests Ceregnola; we used Castelvetrano — a rich, buttery olive) beside the fillet.  There are many variations you could use to flavor this fish:  fresh parsley, basil, dill or other herbs and/or combinations of herbs; white wine instead of lemon juice; or thinly sliced shallots, garlic or onions, just to name a few.  The key components to the dish are the fish, parchment paper and olive oil.  Although, come to think of it, you could also mix things up by using flavor-infused olive oil (we’re thinking garlic olive oil) instead of the basic extra virgin variety. 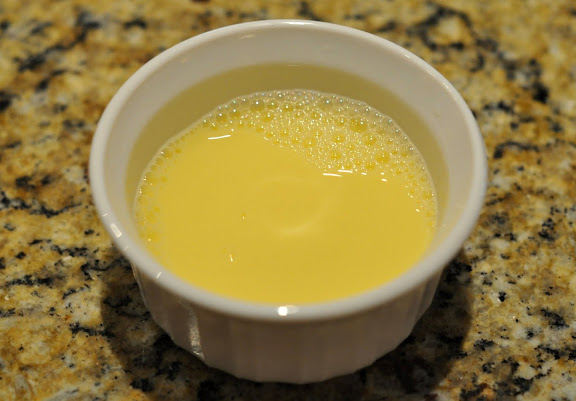 The original recipe calls for creating an egg wash with 1 egg and a tablespoon of water beaten together, then brushing it along the sides of the parchment paper to help seal the package.  We added the water to the egg the first time we made this fish, but thought the egg was was a little too watery.  So now we omit the water and just use a beaten egg. 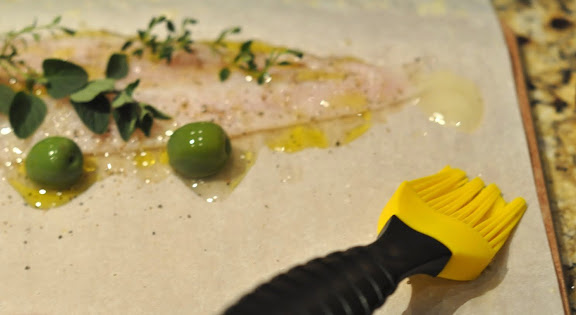 Brush the egg along all the outer edges of the parchment. 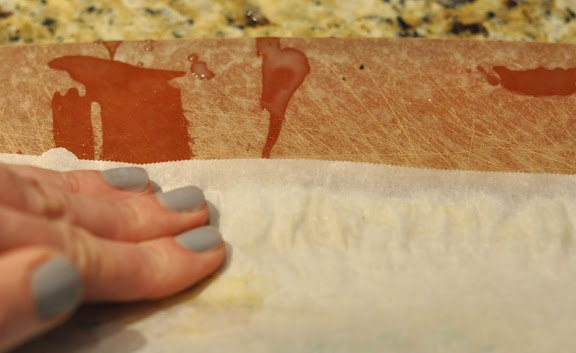 Fold the parchment over so that the edges meet and press them together. 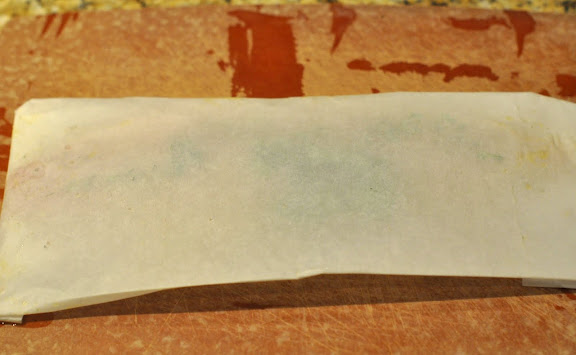 Then carefully fold the excess parchment under the fish on all 4 sides.  For me, this is the most stressful part of the process (aside from fretting about whether the fish would get cooked through, before we learned that 13 minutes does the trick in our oven.)  I always expect the olive oil and lemon juice to spill out the edges, but so far, that’s never happened.  I do usually manage to get egg wash all over the cutting board and counters, but that’s easy to clean up. 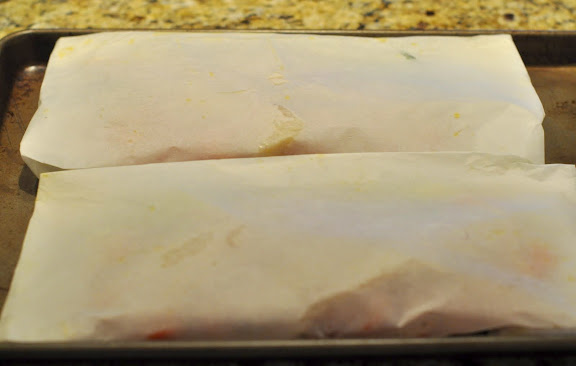 Place the parchment packets on a cookie sheet (2 packets should fit side-by-side on 1 cookie sheet) and bake in the oven preheated to 400 degrees until the fish is cooked through — about 12-15 minutes (depending on the actual heat of your oven and the thickness of the fish.)  Determining whether the fish is done can be a bit tricky with this cooking technique, since cutting into the parchment to check the fish too soon would un-do the little steam pocket going on inside the parchment.  But the 12-15 minute window seems to be a good time-frame for not letting the fish turn out under-done (still clear and soft at the thickest part) or over-done (dried out and rubbery).  You can always put under-done fish back in the oven if necessary.  Unfortunately, there’s not much you can do if it’s over-done, other than learn that you’ll need to cook it 1-2 minutes less next time. 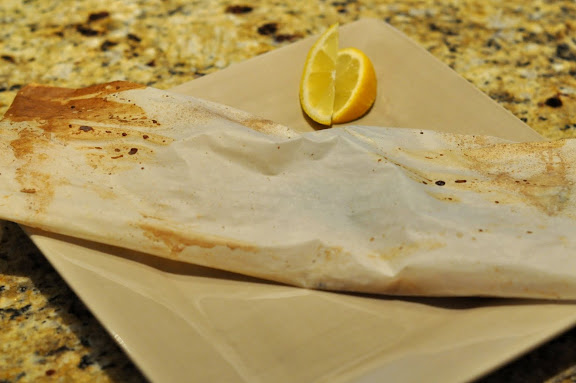 Serve the fish in the parchment on a plate, cutting a small hole in the middle of the paper. 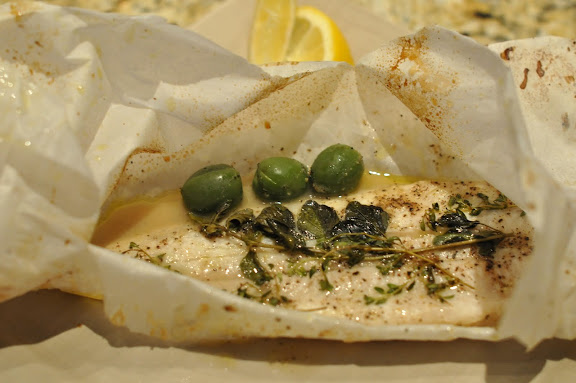 Then gently tear open the parchment and voilí ! — fish baked and served in its own flavorful, buttery herb sauce. 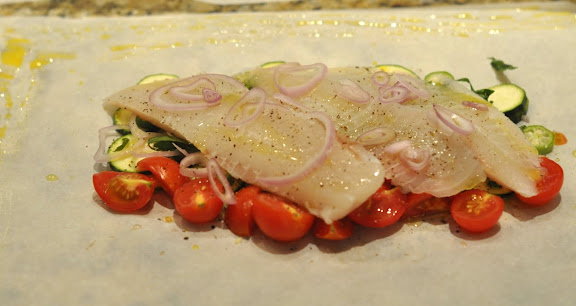 Maybe try adding some veggies to cook in the parchment with the fish.  We experimented with placing a layer of thinly sliced zucchini and okra, chopped cherry tomatoes, chopped fresh basil and thinly sliced shallot rings on the parchment, then topped the veggies with tilapia fillets seasoned with salt & pepper, drizzled with olive oil and white wine, and topped with more shallots.  Then we followed the technique by sealing the edges of the parchment with egg, folding the ends under to make a package, placing the packages on a cookie sheet, and baking them for 13 minutes in the oven at 400 degrees. 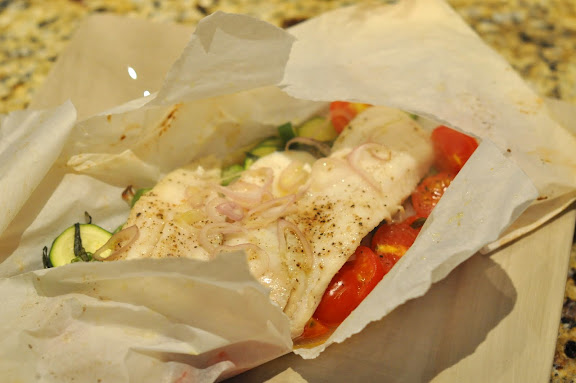 The resulting meal-in-parchment turned out great.  We might not do the okra again, since it was slightly over-done  (or maybe we would cut it on the bias in bigger pieces), but the zucchini and tomatoes were done to our liking (if a little bland) and the fish was cooked through perfectly.  We love how this technique takes the guesswork out of baking fish and look forward to trying even more flavor variations.