This week the Steelers took on the Oakland Raiders.  Oakland doesn’t really have a particular food for which it is known (at least not that we could find), but since it is located in Northern California, we decided to look to that region for a cuisine to cook in this week’s Steeler Opponent-City Challenge (S.O.C.C.)  When we think Northern California, we think about our trip to Napa, where we discovered the world’s greatest tri-tip sandwich (among other amazing food.)  We’ve grilled tri-tip before (the classic Santa Maria style), but wanted to try a new recipe this time.  Not so coincidentally, I found this recipe after searching the Internets for Oakland Raider tailgate food.  We adapted the marinade by using red wine and orange slices for sangria-esque flavor instead of sangria, and we reduced the quantities since we were using about 2 pounds of tri-tip to feed 2 people, rather than 18 pounds of meat for 54 servings as contemplated in the original (tailgate) recipe.  Aside from doing the math to reduce the marinade ingredients, the second most difficult aspect of this recipe is having to wait to eat it.  We marinated the tri-tip for about 18 hours (it doesn’t need to marinate that long, but at least for a few hours), and it was hard to be patient after smelling the marinade ingredients mixed together:  red wine, soy sauce, jalapeno, shallot, garlic, ginger and orange slices.  These components combine well to impart complex flavors to the beef — a nicely pungent heat from the jalapeno, shallot and garlic; some saltiness from the soy; richness from the wine; and bright freshness from the ginger and orange.  The marinade would be just as good with other cuts of beef too (top sirloin, london broil or flank steak maybe) if you can’t find tri-tip, which can be costly and/or difficult to find outside Northern California.  The key is the delicious marinade.  Much like the key to the Raiders’ win this week was the field goal in the final seconds of the game (sad face.) 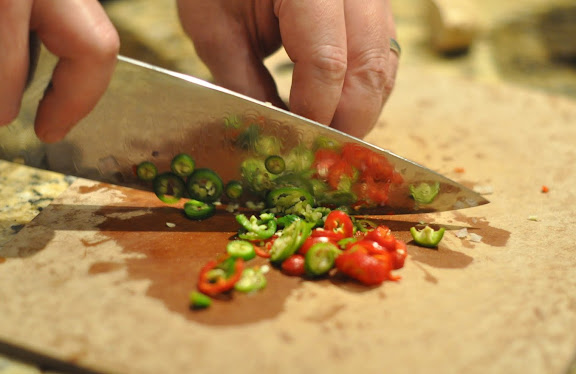 Start by chopping the jalapeno, shallot, garlic and ginger, then cut the orange in half and slice the half into rings.  No need to be precise in the chopping — the purpose of the veggies and orange is simply to add flavor to the marinade. 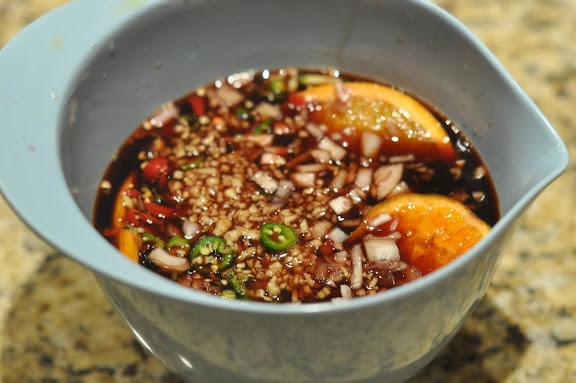 Combine the chopped veggies with the wine and soy sauce. 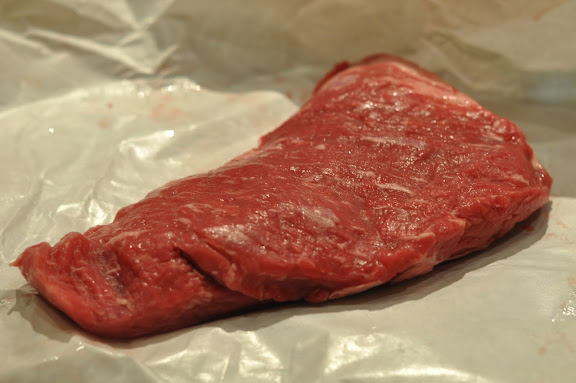 The tri-tip we got had been pretty well-trimmed of its fat.  Perhaps too well-trimmed.  (Perhaps much like the fingernails of the Steeler players who fumbled the ball twice in the fourth quarter.  Butterfingers.) 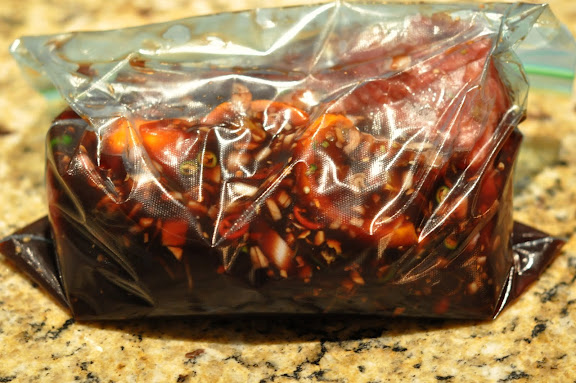 Place the beef and marinade in a plastic bag and refrigerate for a few hours up to overnight-ish. 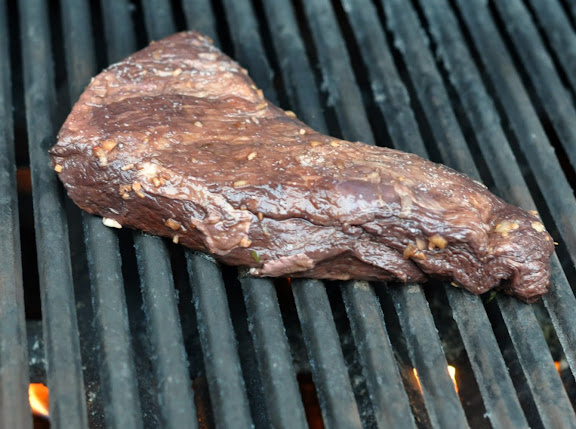 Remove the tri-tip from the marinade (discard the marinade), place the beef on a plate and allow it to rest for about 30 minutes prior to grilling.  Resting the beef at room temperature before putting it on a hot grill allows the meat to cook more evenly throughout — seared on the outside and cooked to the desired rare-ness inside.  Grill the tri-tip over direct-medium-heat until done, turning once halfway through cooking time and rotating once per side for badass grill marks. 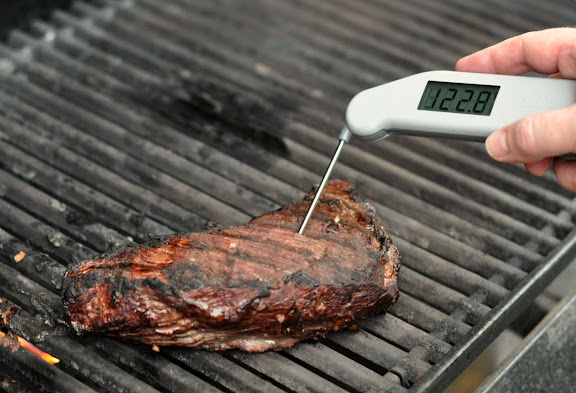 After turning the beef and rotating it on the second side, use a meat thermometer to check the temperature in the thickest part of the tri-tip to check the temp.  For medium-rare beef, you want to pull it off the grill at about 130-135 degrees.  (If you like it more bloody than that, you already know what to do, Vampire.)  The window for over-cooking the beef is pretty small, so keep a close eye on the temperature.  (Much like the short window for overtime in this week’s game with the Raiders, an overtime which we really wish we could have had — as much as I, as an apathetic football fan, generally despise overtime.) 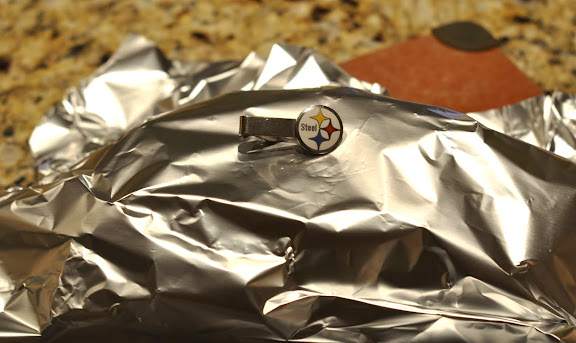 Tent the cooked tri-tip with foil to rest for about 10 minutes before slicing it. 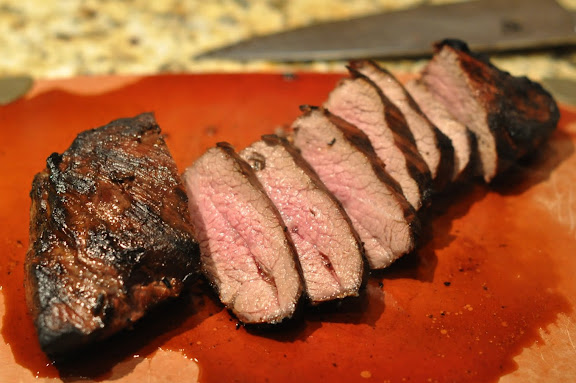 Slice and serve.  Our tri-tip was good, but sadly a little more done than we would have preferred (seriously, keep a close eye on the temp — ours went from 125 to 140 really quick.)  Although the recipe didn’t score quite as high in our playbook as the high-scoring Steelers/Raiders game, we would definitely use this marinade again.  Steelers 1-2, Foodie Lawyer 2-1 (due to the final-second “field goal” that was the over-cooking of the tri-tip.)