The Steelers played the New York Jets this week.  Continuing with our Steeler Opponent-City Challenge (“S.O.C.C.” for short), it was a little daunting to try to pick a dish indigenous to New York, a city known for its food and diversity of cuisine.  When we think New York, no singular food automatically comes to mind.  The city has entire neighborhoods centered around different types of cuisine, from all over the world.  Ultimately, we decided to go with a dish that purportedly originated in New York, and is named after its oldest, and perhaps most well-known borough.  Not to be confused with its creamy cousin from New England (hmmmm, do the Steelers play the Patriots this season??), this version of clam chowder has a clear broth base, with tomatoes to provide its signature red color.  Famed chef and food writer James Beard supposedly once characterized this version as “that rather horrendous soup called Manhattan clam chowder . . . resembles a vegetable soup that accidentally had some clams dumped into it.”  We respectfully disagree.  Although we were initially a lot more familiar with the New England style of chowder (and like it very much), we found the Manhattan chowder to be equally good in its own way, with sweetly rich tomato flavor balanced out by the salty clams.  Just as there are die-hard fans of particular football teams, there are people who likely side with Chef Beard in their unwavering preference for New England clam chowder versus the Manhattan version.  But we feel there is room for both in our little food world.  (Unlike our feelings for other teams in our little football world — suck it Jets, Steelers win!) 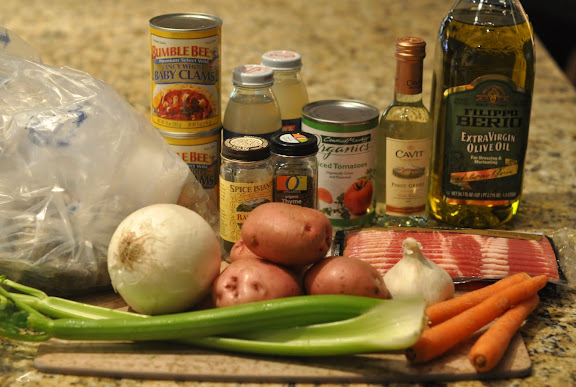 Having never made Manhattan clam chowder before (and rarely, if ever, having eaten it), we researched several recipes and ended up adapting this one for our New York challenge.  The ingredients include bacon, olive oil, carrots, celery, onion, garlic, white wine, dried thyme, bay leaves, diced tomatoes, clam juice, potatoes, canned baby clams (way better than they sound), live clams, hot sauce and salt & pepper. 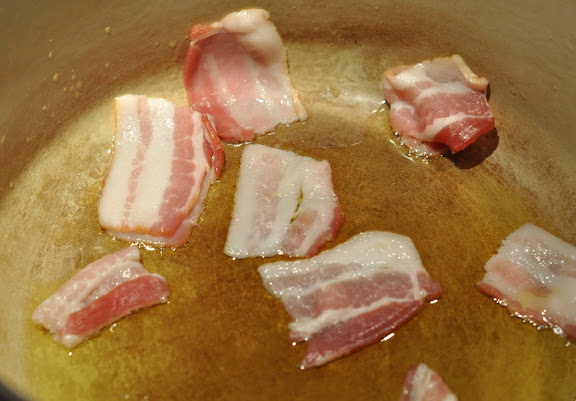 Heat the olive oil in a Dutch oven (or other heavy-bottomed pot) over medium-high heat, then add the bacon (cut into thirds) and cook, stirring occasionally, until the bacon browns and gets crispy — about 10-12 minutes.  Remove the crisp bacon to a cutting board, but keep the rendered fat in the pot — that’s the good stuff for sauteing veggies.  Once the bacon cools, chop or crumble it into small pieces. 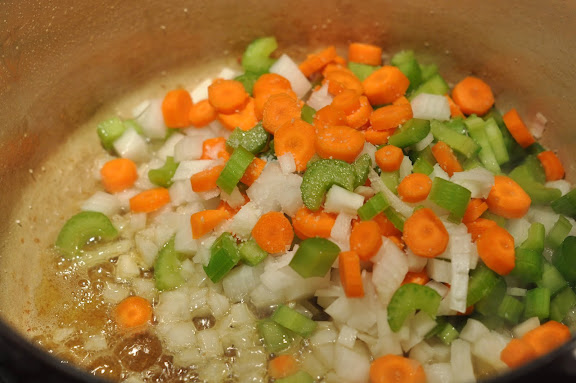 Add the carrots, onion, celery and a generous pinch of salt to the pot and cook until the veggies soften — about 6-8 minutes. 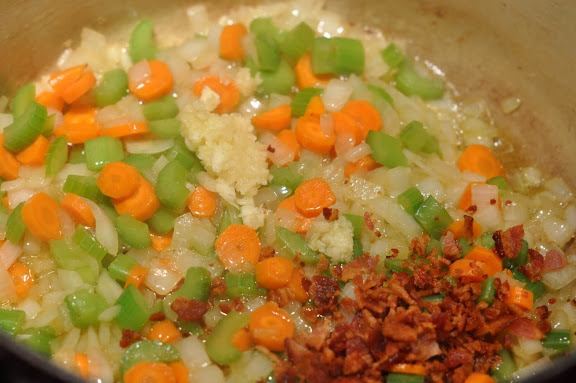 Add the bacon and garlic and cook until fragrant — about 1 minute. 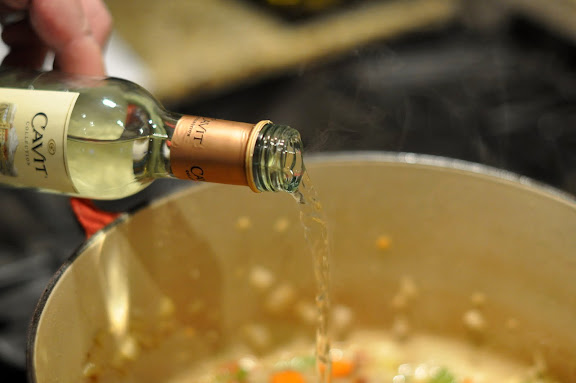 Add the white wine and stir to scrape up any browned bits from the bottom of the pot.  Cook until the liquid reduces — about 2-3 minutes. 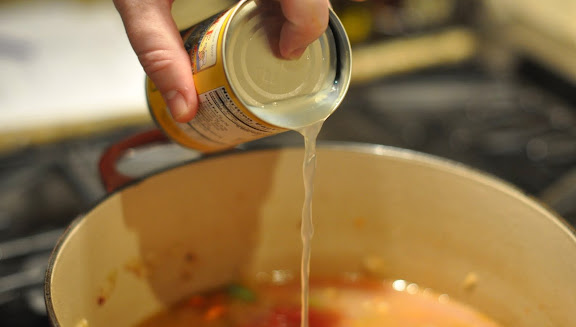 Add the clam juices — the bottled clam juice and the juice from the canned clams (you’ll add the clams later.)  You might be thinking, that’s a lot of clam juice.  (I sure was.)  But, surprisingly, the overall flavor of the finished dish does not scream clam, not even a little bit. 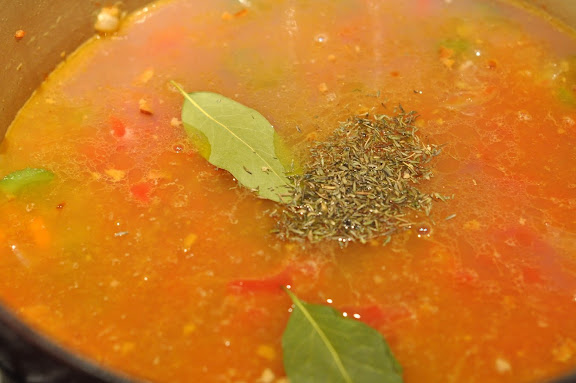 Add the tomatoes (with their juices), thyme and bay leaves.  Stir it all together and turn up the heat. 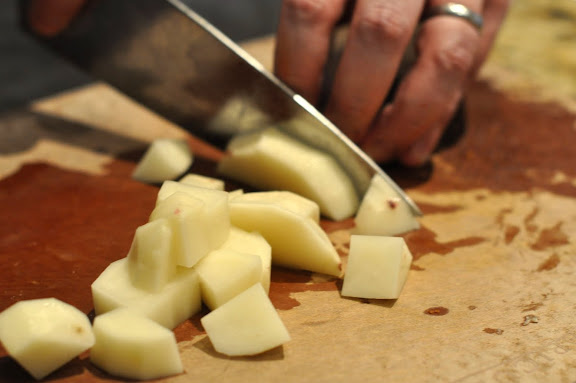 While the broth is heating to a boil (which takes a little while), peel and cut the potatoes and add them to the pot. 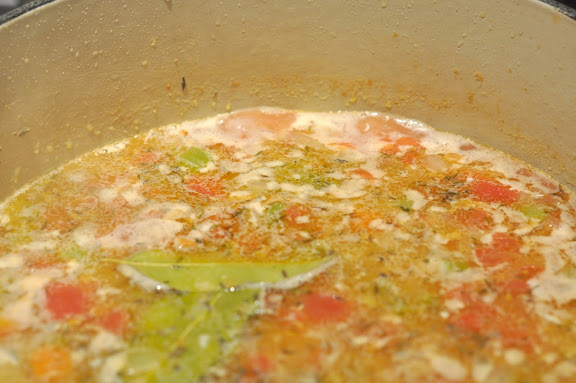 Once the broth (with potatoes) starts to boil, cover the pot, reduce the heat and simmer until the potatoes are done — about 30-40 minutes. 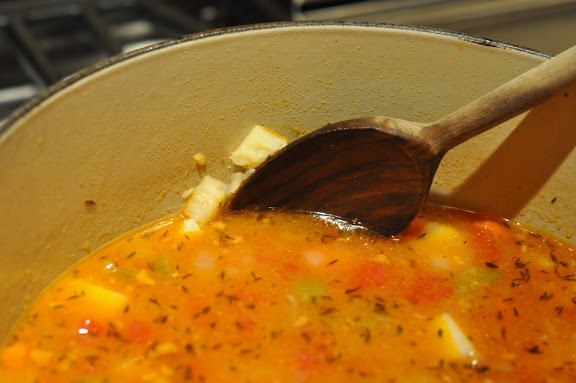 You can tell the potatoes are done if they smash easily with the back of a spoon against the side of the pot.  We like to smash about 1/3 of the potatoes in order to give the finished chowder a bit more of a silky texture.  Plus, the clams should be the star of this dish, not the potato.  Potatoes have this, allow the clams to shine here. 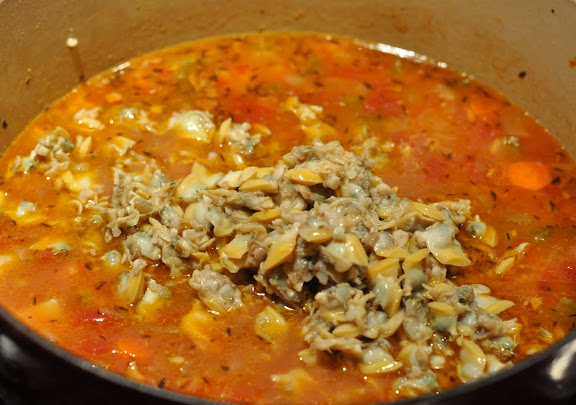 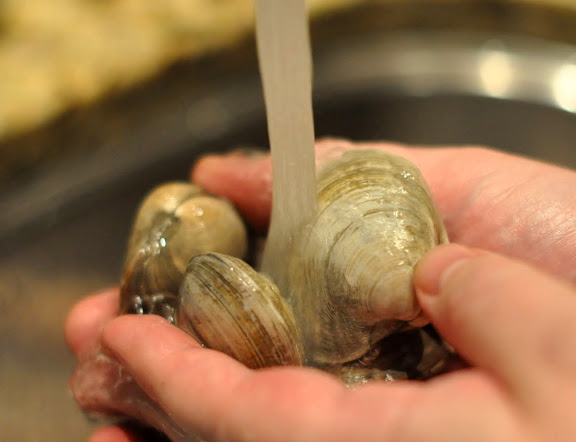 Live clams aren’t necessary for this dish, but they add both flavor and visual appeal if you want to add them.  Just make sure that they are all still alive (shells closed) and clean before you add them to the pot.  Discard any clams that are already open.  We got our clams from the grocery store and just rinsed them under cold water, but if you’re lucky enough to get them right out of the ocean, you probably want to scrub them with a brush under cold water (and if you’re harvesting your own clams, you likely already know this.) 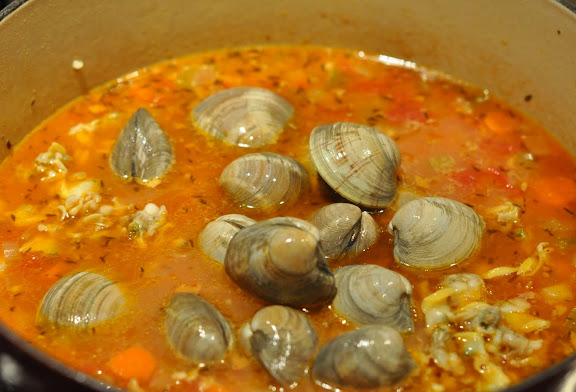 Add the live clams, cover the pot and cook until all the clams open up — about 5-10 minutes. 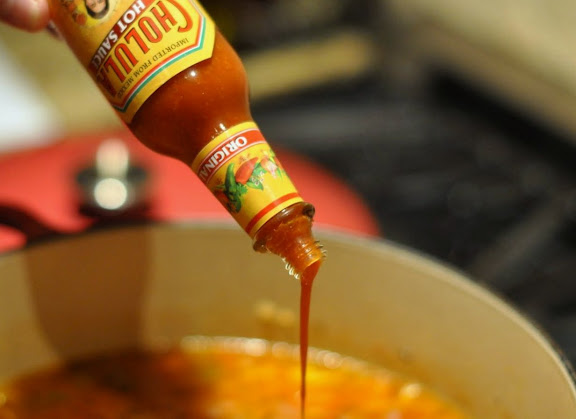 Add a bit of hot sauce for a little kick (we love Cholula, but Tabasco, or Louisiana Hot, or whatever kind you prefer will also work), then taste and add salt & pepper as needed. 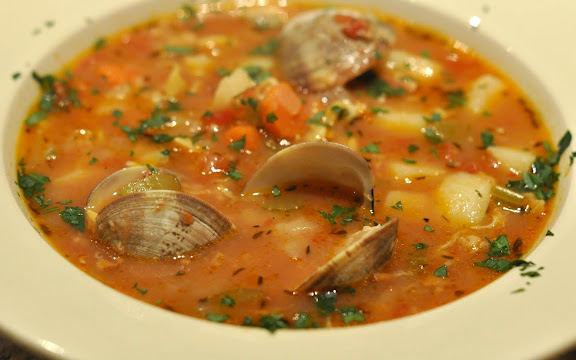 Garnish with chopped parsley and serve with good sourdough bread.  We were pleasantly surprised by how delicious the chowder turned out and would definitely make it again.  For anyone keeping track, so far, the Steelers are 1-1 in terms of wins, and Foodie Lawyer is 2-0 in terms of successfully delicious meals in the S.O.C.C.  Winning!