There are probably as many different chili recipes as there are reasons for people’s differing opinions as to whether or not chili should have beans in it.  For the record, we do not put beans in our traditional (award-winning!) chili because Texas Chili does not have beans in it.  Apparently someone even wrote a song about it:  “If You Know Beans About Chili, You Know That Chili Has No Beans.”  We make an exception to this rule for white chili, which is a lighter alternative to the red meat version.  We’ve made white chili before and enjoyed it, but felt that it lacked the flavor “wow factor” of our beef chili recipe.  Enter the chipotle and the tomatillo.  The idea of adding these ingredients came from this recipe and took the white chili to a whole new level, flavor-wise.  The spicy/smoky chipotle and sweet/tart tomatillo give a much needed boost to the otherwise potentially bland flavor combination of white beans and ground turkey.  This is a dish that even a Texas-chili-purist can love, beans and all. 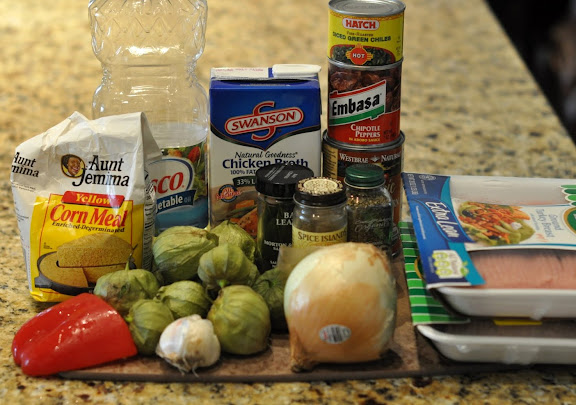 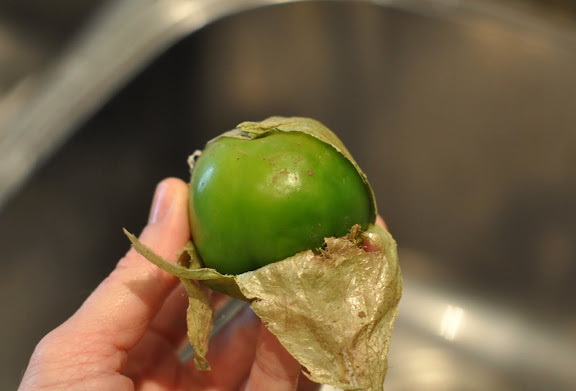 Prepare the tomatillos for roasting by peeling off the outer husks and rinsing off any dirt from the tomatillo skins. 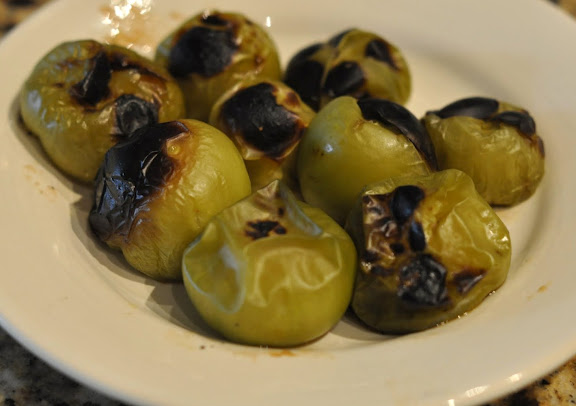 Then place the tomatillos on a foil-lined cookie sheet and cook them under the broiler until the skin begins to blacken — about 5-7 minutes.  The tomatillos crackle and release sticky juices when they cook, which will wreak havoc on your cookie sheet (foil tip brought to you by the current owners of one less cookie sheet.) 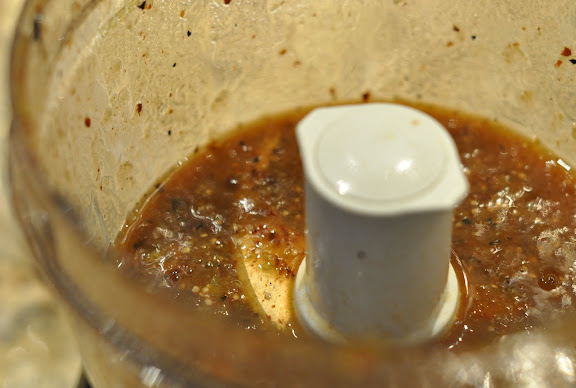 Puree the cooled tomatillos and chipotle chilies with a little water in a blender or small food processor until smooth.  Set aside. 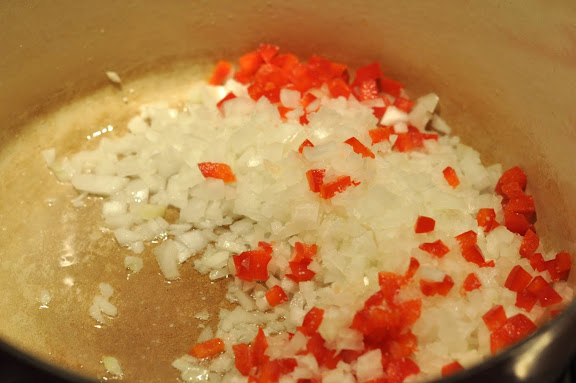 Heat a tablespoon of oil in a large Dutch oven over medium-high heat.  Add the onions and red bell pepper and cook until soft — about 5-7 minutes. 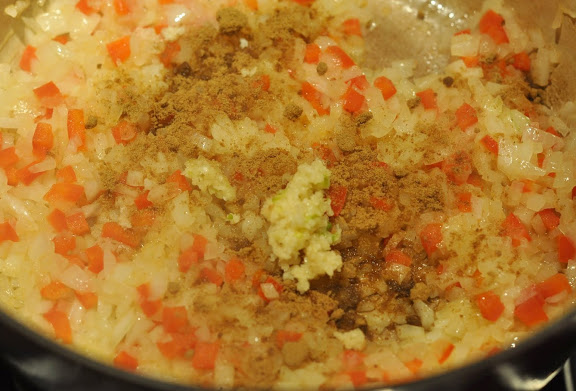 Stir in the garlic and cumin and cook until fragrant — about 30 seconds. 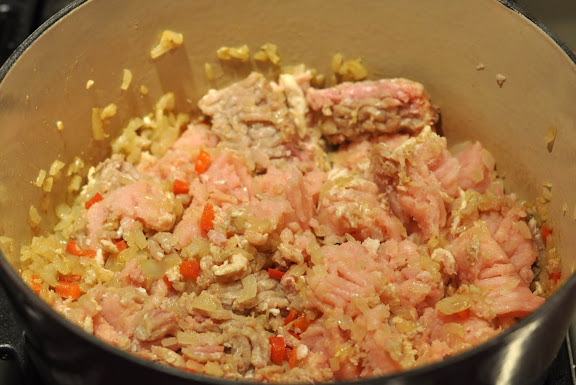 Add the ground turkey and cook, stirring often to break up any lumps, until the turkey is browned — about 8-10 minutes. 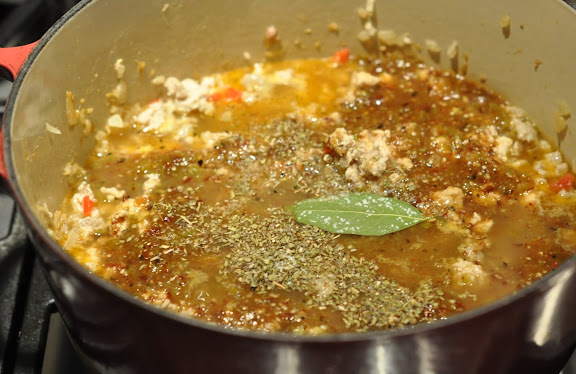 Add the chipotle/tomatillo puree, chicken broth, bay leaf, oregano and some salt to the Dutch oven and bring the mixture to a boil. 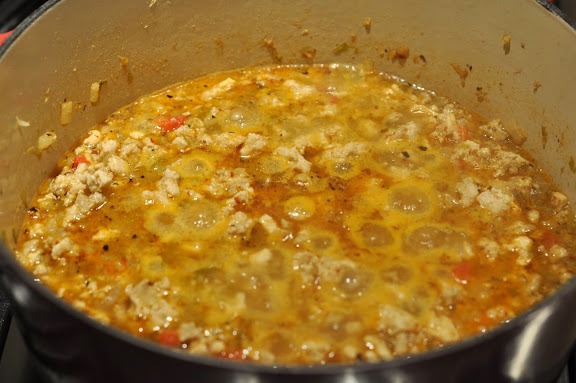 Simmer the chili, uncovered, for about an hour.  Stir occasionally and add more chicken broth as needed to keep the turkey barely covered with liquid. 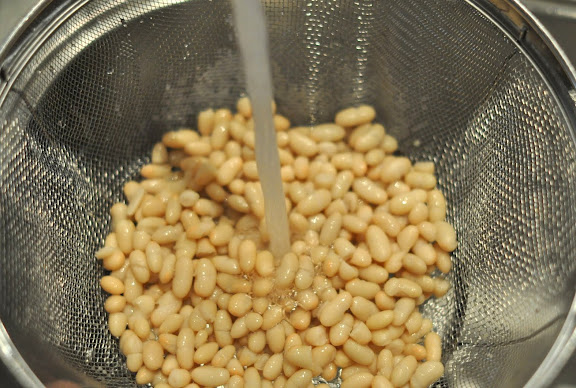 Drain and rinse the beans under cold water. 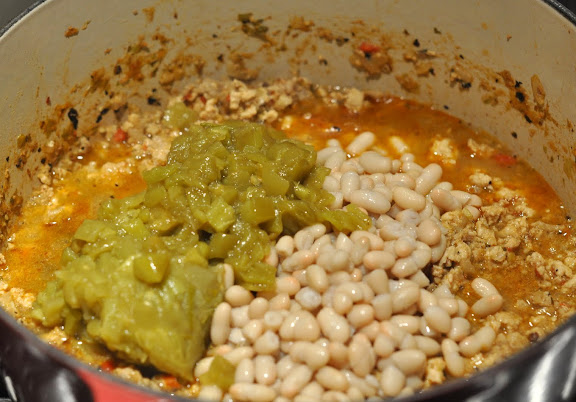 Add the beans and green chilies to the Dutch oven and continue to simmer the chili, stirring occasionally, for about 30 minutes.  When the chili is done, discard the bay leaf and add salt and pepper to taste. 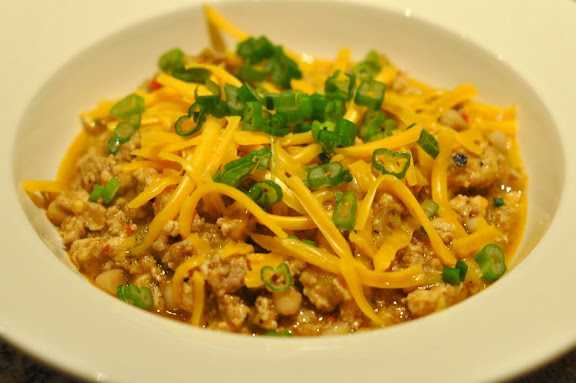 We garnished the chili with cheddar cheese and chopped green onions (green parts only.)  We didn’t expect this turkey chili to have as much complexity and layered flavors as its beefy “red” chili cousin, but it really did.  And the beans were a nice addition — providing a rather creamy texture.  But don’t even attempt to suggest that we add beans to our Texas Chili.  That’s just crazy talk, ya’ll!