We recently spent a nice weekend in Minneapolis visiting my brother.  We had never been to Minneapolis and weren’t quite sure what to expect.  Turns out that it’s a really nice little city with clean streets, amazing architecture, cool neighborhoods and great restaurants.  We had a nice lunch one day at a unique eatery in an area called Dinkytown, near the University of Minnesota.  The Loring Pasta Bar is an eclectic venue with a nice atmosphere and really delicious food.  We enjoyed Loring very much and were pleasantly surprised by this and the wide variety of other top-rated restaurants in the city.  In addition to nice restaurants, Minneapolis also has really friendly people.  We commented to my brother about how nice everyone we encountered seemed to be.  He laughed and explained a little phenomenon called “Minnesota Nice.”  Apparently this is a real thing, in which the person is passively-aggressively courteous to your face, but then will talk bad about you behind your back.  Hmmmm.  We spent a good part of the rest of the weekend trying to figure out if we were being “Minnesota Nice’d” (as we called it) each time someone was polite or friendly to us.  Paranoid tourist tendencies aside, we found Minneapolis to be a wonderful city with lots more to explore in terms of art, history, nature and food.  We’ll definitely go back.  Just not in the winter.  Although I’m sure it’s plenty “nice” there in the winter too. 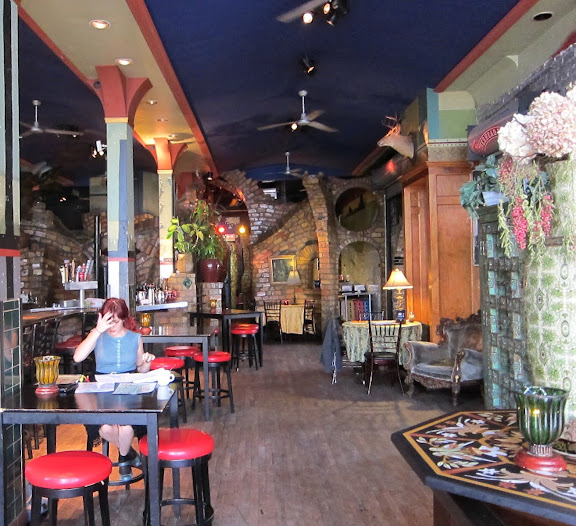 The front area of Loring Pasta Bar makes you feel a little bit like you’re in a really cool, hipster castle with all the exposed stone archways combined with colorful paint schemes and mixed styles of furniture. 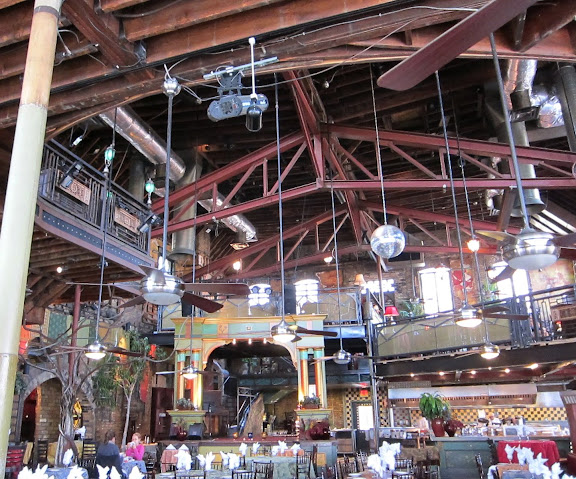 We dined in the cavernous main room with multiple levels, iron sculptures and beams, a huge curved staircase and disco ball.  The industrial feel of the room was softened by lots of live trees and plants throughout the room.  It’s a really cool space and our waitress informed us that they host a lot of weddings there.  (Seems like an unusual venue for a wedding to me.  Was she being serious?  Or did we get Minnesota Nice’d — so she could mock us later for believing her?) 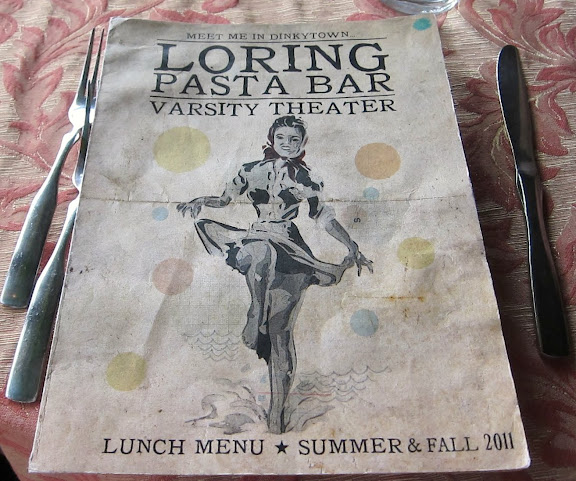 The menu looks like a playbill — a fitting nod to the distinction that Minneapolis boasts almost the largest live theater per capita in the U.S. (second only to New York City.)  We did a quick tour of the Guthrie Theater and were most impressed.  It’s the kind of place where people actually dress up to attend a show, even the matinee performances. 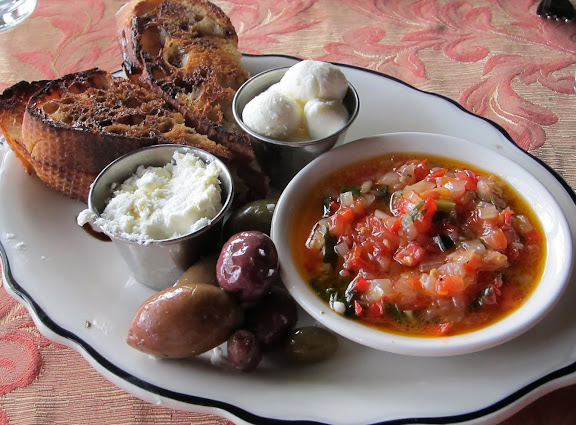 For an appetizer to share, we ordered the Salsa Italiano — a sauce made with tomatoes, onion, basil, roasted red pepper, and garlic, with garlic toast for dipping, and olives, goat cheese and mozzarella on the side.  Fresh and delicious. 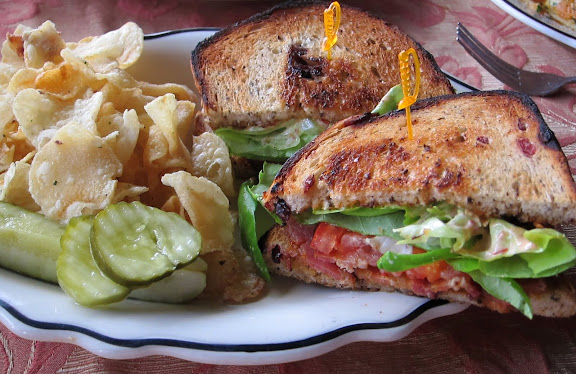 For my entree, I had the B.L.T., with applewood smoked bacon, lettuce, tomato and chipotle mayonaise on cranberry-rice bread.  I almost didn’t order this particular sandwich because the bread did not sound good to me, but it provided just the right amount of sweetness to contradict the smoky bacon and spicy mayo.  All the flavors worked really well together.  The B.L.T. was served with parmesan chips, which alone necessitate a return trip to Minneapolis and the Loring Pasta Bar someday. 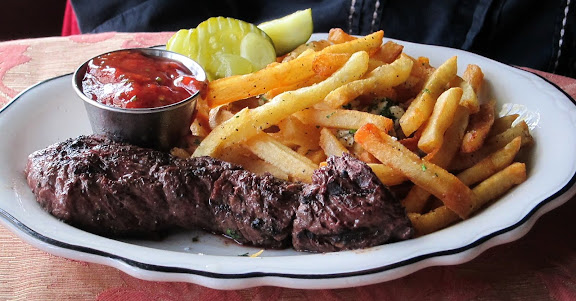 My brother ordered the Steak Frites — a grilled hangar steak with garlic fries and (the star of the dish in my opinion) homemade ketchup.  I can be annoying to dine with when I’m going to be blogging about the meal.  Instead of the usual “how’s your lunch?”  “good, how’s yours?” chit-chat, I nag people to describe their food with words other than just “good” and tell me specifically what they like or don’t like about it.  When I pressed my brother for more of a description, he smiled and said “It’s good — it’s steak.”  (Did I just get Minnesota Nice’d by my own brother?) 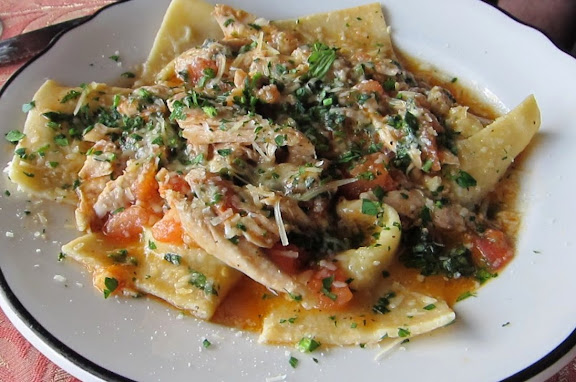 Dan ordered the Chicken and Mozzarella Ravioli with “Napolitana” sauce made from tomatoes, roasted garlic, basil and olive oil.  He enjoyed the house-made pasta and described the sauce as rich, garlicky and herby.  Nice of you to come up with such a creative description there, thanks dear. 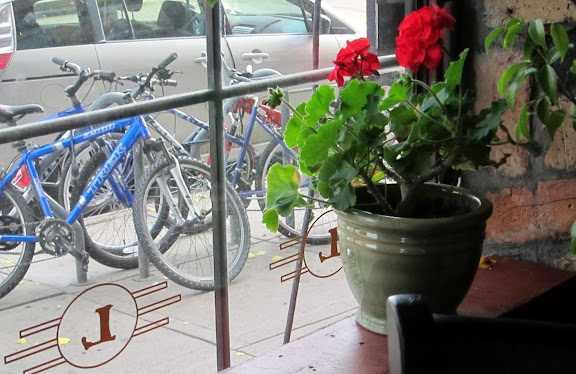 Fresh geranium plants in the windows at Loring were a lovely touch.  The bikes lined up outside encapsulate the unexpected (to us anyway) youthful vibrancy of a city that celebrates the outdoors and green living — yet another attribute of this surprisingly marvelous place.  Nicely done, Minneapolis.  (For real.)