We found this recipe in a magazine we picked up a few years ago called “Sizzle with America’s Top Chefs,” which features recipes from chefs including Mario Batali, Emeril Lagasse, Paula Deen and Wolfgang Puck, among others.  The magazine also has a section with recipes from The Culinary Institute of America.  This chicken dish is one of The CIA’s creations.  We enjoyed it, although it tasted very similar to our Korean Chicken, which involves less ingredients and steps.  So we prefer our recipe during a busy week, but The CIA’s version is a good alternative when we want the extra layer of grill flavor.  We’ll make the scallion salad recipe again for sure — the spicy, sesame flavors combined with the onion-y scallions to provide a nice kick to the chicken that would also work well in other Asian dishes. 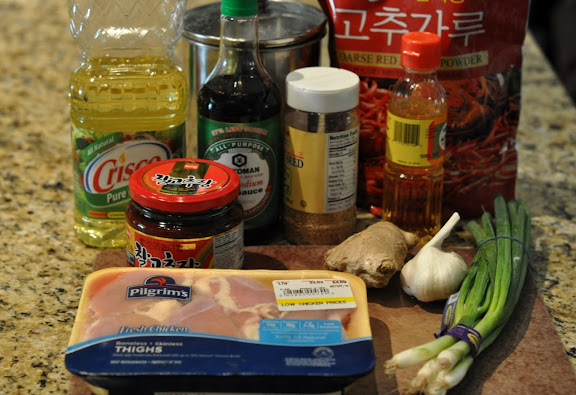 This recipe calls for both a marinade and a basting sauce.  The ingredients for the marinade are scallions, ginger, garlic, soy sauce, mirin (rice wine), vegetable or canola oil, sesame seeds, sugar and Korean red pepper powder.  Aside from the red pepper powder, all of these items should be available at your local grocery store.  As for the powder, you could always borrow some from us if you need it.  The one time we visited an Asian market in our area, we went a little overboard (who, us?) buying Asian ingredients and ended up with a giant bag of red pepper powder, without realizing that most recipes including it only call for a couple of teaspoons per recipe.  Hopefully this stuff has a really really long shelf life. 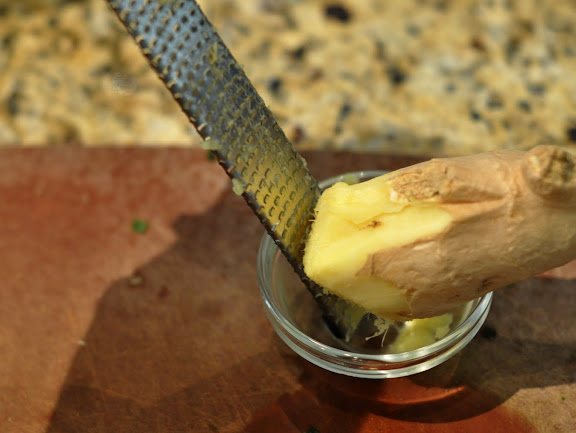 Peel the fresh ginger with a vegetable peeler and use a microplane zester to grate it into tiny pieces.  (You could also just peel it and chop it up, but the zester works great for getting minced-sized pieces.) 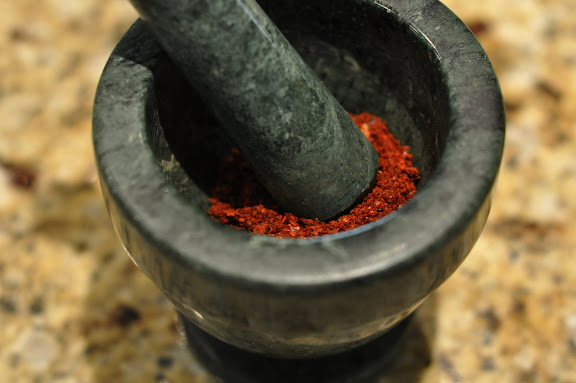 Because our red pepper powder is “coarse” grade, we ground it up a little more with our mortar and pestle to get a finer texture. 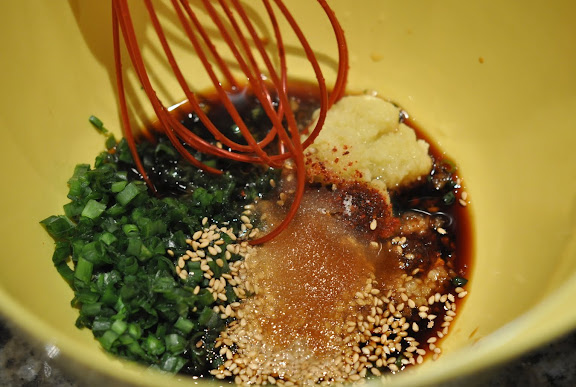 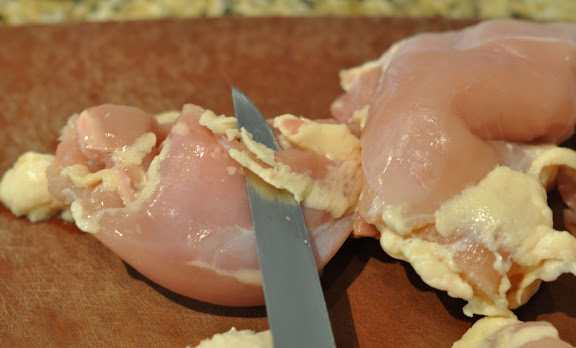 Trim the visible fat from the chicken thighs. 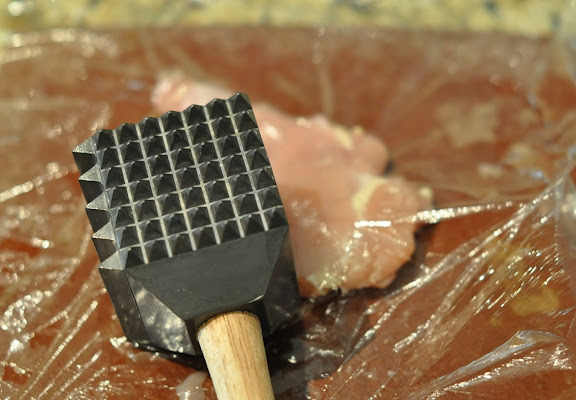 Then pound the thighs until they are about 1/2 an inch thick.  Putting a piece of plastic wrap over the thighs while you pound them reduces the amount of meat bit splatter.  Now there’s a kitchen tip you won’t soon forget. 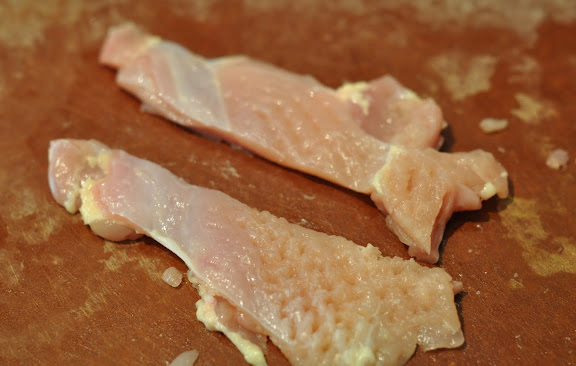 Cut the pounded thighs in half.  You could also use chicken tenders in this recipe since that’s pretty much the shape and size you end up with, but we think the dark meat of the thighs tastes better in the end result. 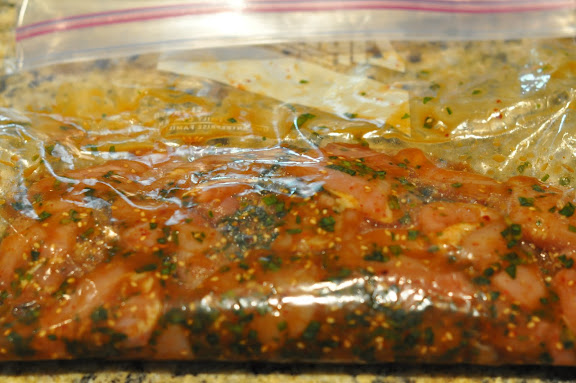 Add the chicken and marinade to a resealable bag and place in the refrigerator to marinate for at least 1 and up to 12 hours. 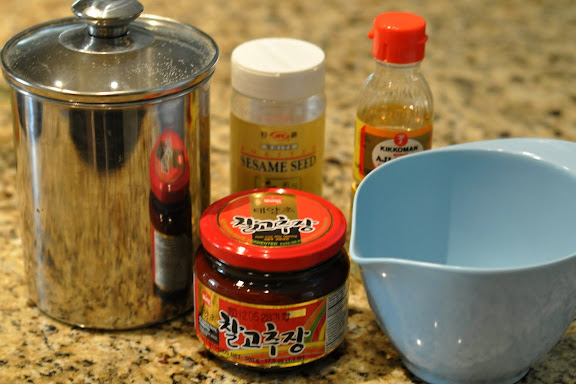 Next, prepare the sauce for the chicken — consisting of sesame seeds, Korean red pepper paste, mirin and sugar. 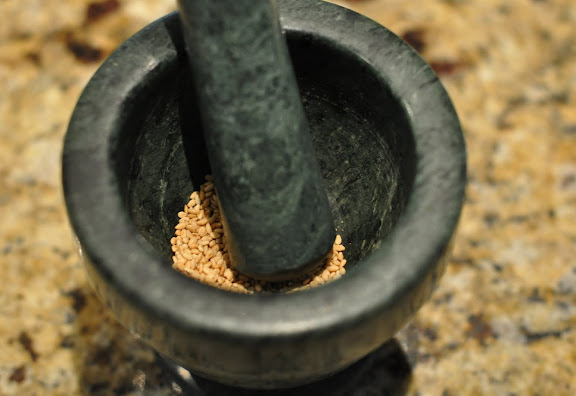 The recipe calls for “smashing” the sesame seeds, so we ground them for a few turns with the mortar and pestle (after cleaning out the red pepper powder residue.) 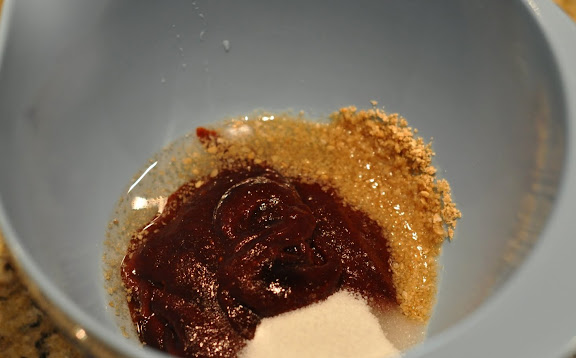 Whisk the sauce ingredients together and refrigerate until ready to use.  The sauce was a little thick for our liking, so we added a little more soy and a tablespoon of sesame oil. 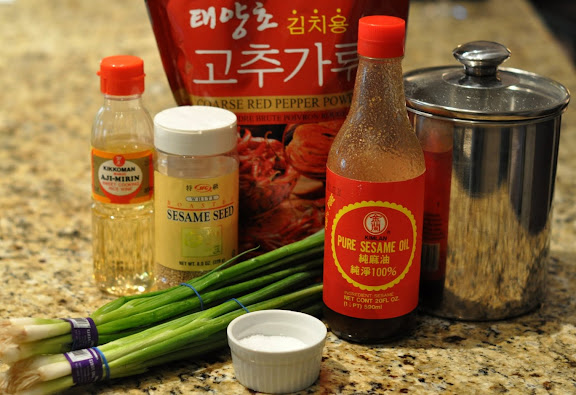 Next, mix up the ingredients for the scallion salad — sugar, sesame oil, mirin, smashed sesame seeds, red pepper powder, salt and scallions.  Sense a theme here yet?  Lots of the same ingredients being used in several different components of the meal. 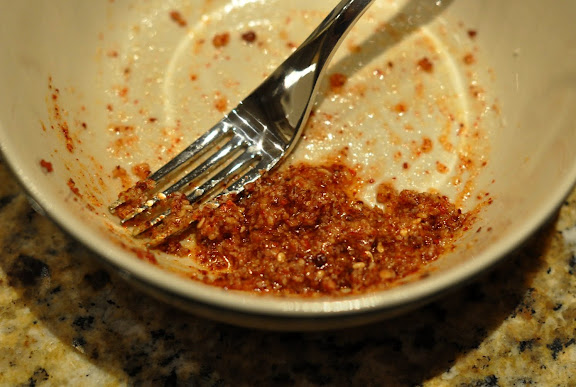 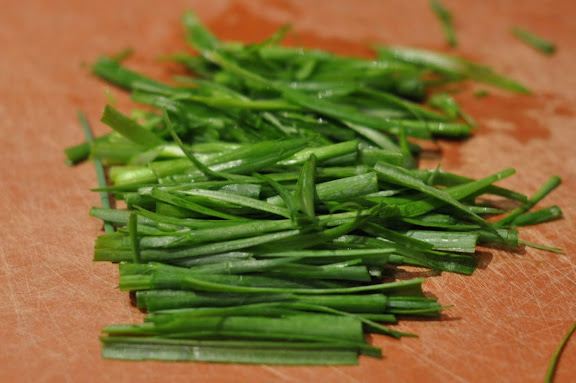 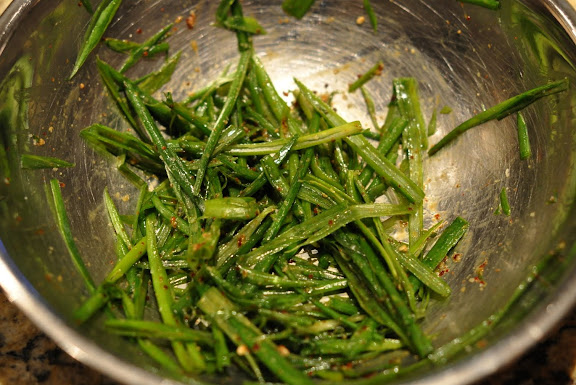 Toss the scallions with the dressing/paste and set aside until you’re ready to serve the chicken. 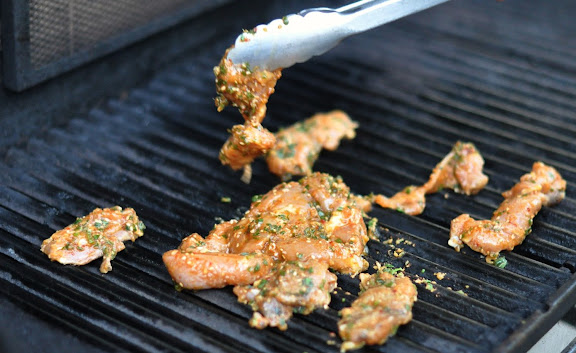 Grill the chicken over medium-high heat until browned and cooked through — about 4-5 minutes per side. 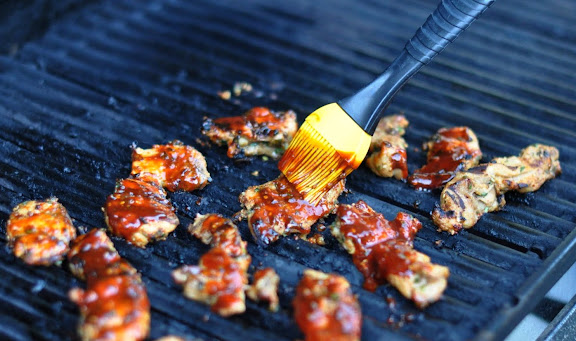 After turning the chicken, baste it with the sauce and continue cooking for another 4-5 minutes. 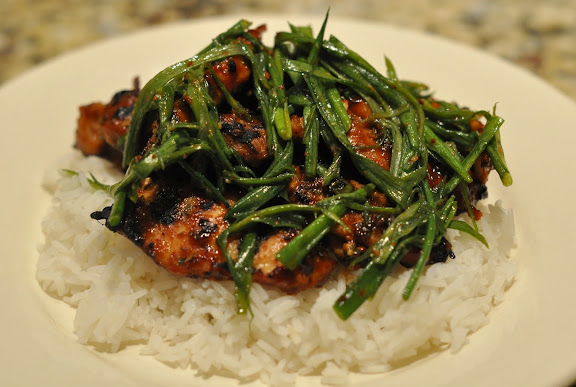 We served the chicken over jasmine rice, topped with the scallion salad.  While the chicken had a really good tangy/spicy/grilled combination of flavors, it was more work than we usually prefer for a weeknight meal.  But the scallion salad (which is really more of a topping than a salad) was a great addition that we will use next time we make our Korean Chicken.  Maybe we’ll try it on our Asian Pork Tenderloin as well.