Pork tenderloin is often overlooked as an entree, but it is a fairly lean protein that can be flavored with delicious sauces, and it cooks easily on the grill.  On this night, we marinated two pork tenderloins in some Asian condiments — primarily soy sauce and black bean paste — then grilled it until it was cooked through but still juicy. 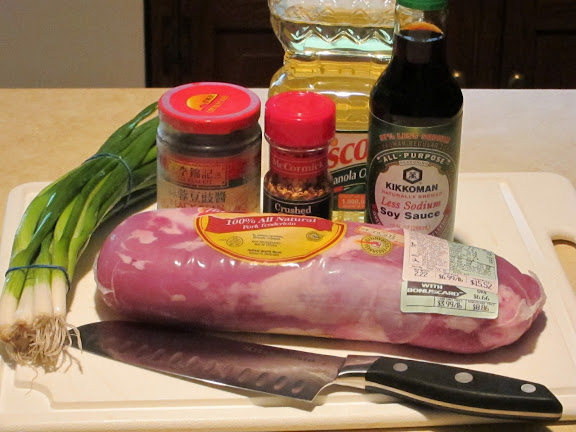 The ingredients for our Asian Pork Tenderloin are fairly simple — tenderloins, soy sauce, Asian black bean sauce, canola oil (you can also use vegetable oil) and green onions.  We usually also use chili garlic sauce to add a little kick, but did not have any on hand so we substituted some crushed red pepper flakes.

Black Bean Sauce is fairly easy to find in the Asian section of your grocery store.  You can substitute hoisin sauce if that’s all you can find. 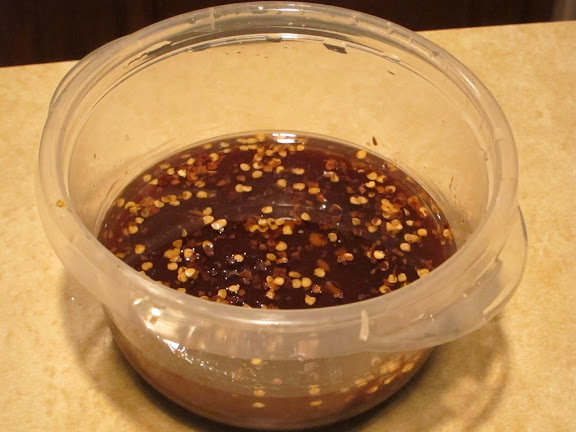 Whisk the marinade ingredients together in a small bowl.  Most of it will be used to marinate the pork, but be sure to save a few tablespoons to drizzle onto the pork when it is almost finished on the grill. 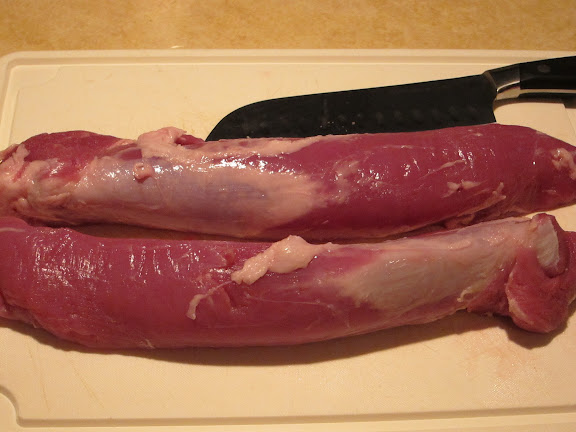 We like to trim the silvery skin from the pork tenderloins, as well as all visible fat. 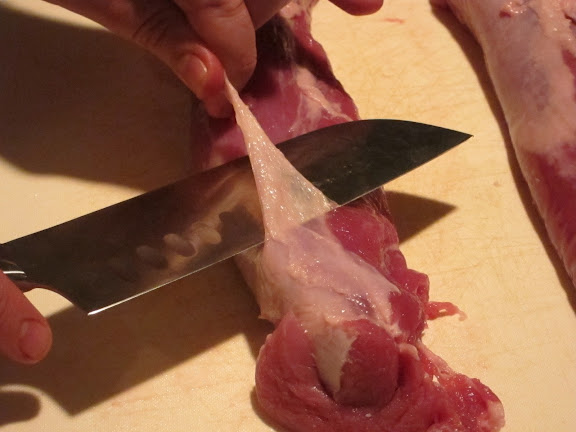 Trimming the pork is easy — just look for the big white pieces of fat and carefully slice them off.  One way is to start the cut, then hold the end with your fingers while continuing to slice off the rest of the piece. 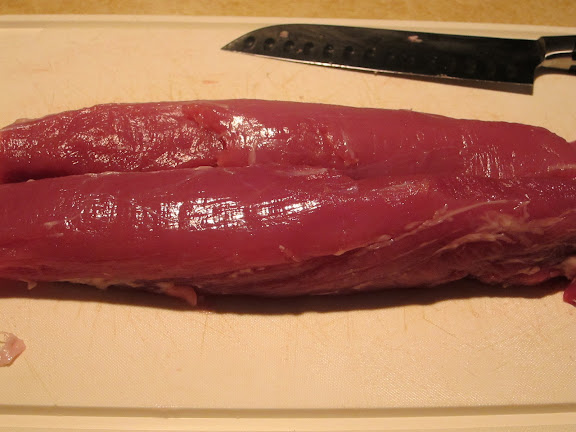 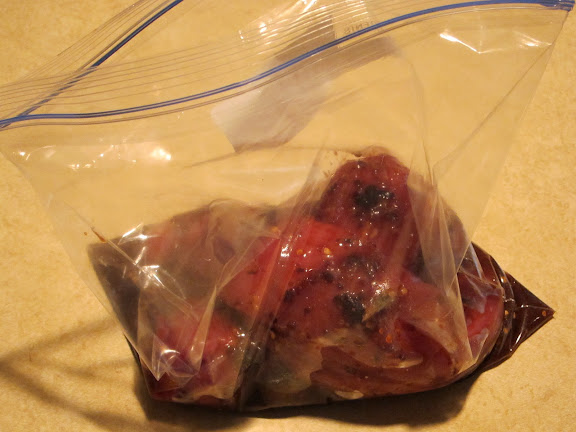 It’s easy to marinate in a gallon-sized sealable bag, as it ensures that the marinade covers all sides of the pork. 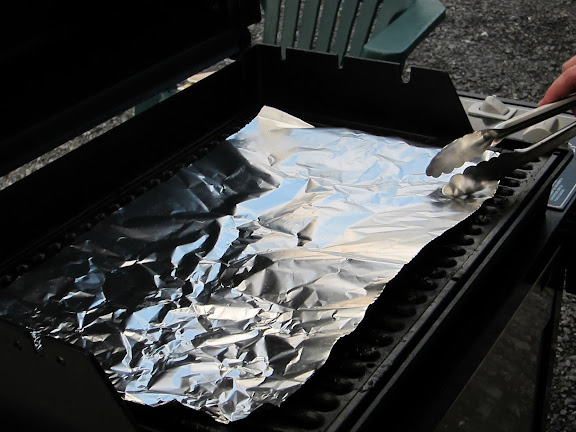 The grill grates were still pretty dirty from the BBQ Game Hen the night before.  A good trick for getting a dirty grate clean in a hurry is to add a piece of heavy aluminum foil over the grate as the grill heats up.  The aluminum foil reflects the heat back onto the grates and gets them clean in no time at all. 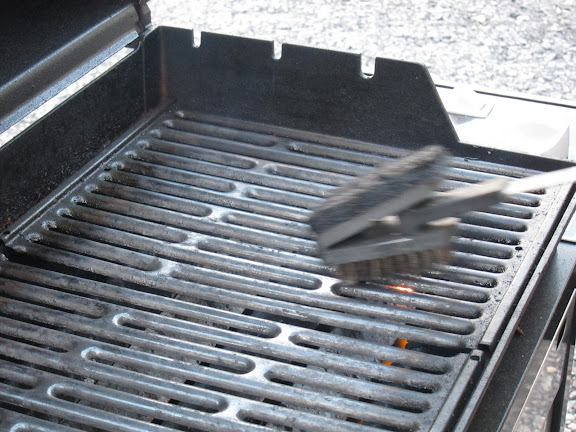 Cleaning your grates before your next grilling adventure is important because it minimizes the amount of food sticking to the grill.  While cleaning off the grates, be sure to push the grill brush away from you and toward the back of the grill, rather than scraping the hot grate remnants toward you, especially when wearing flip-flops (this is a mistake you will only make 1-2 times). 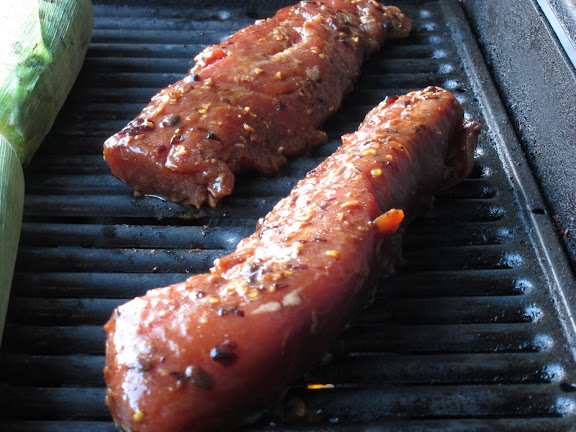 Sear the pork tenderloins over direct medium-high heat on all sides.  It usually takes approximately 6-8 minutes per side.  (Please ignore the corn on the left.  We had some un-husked ears leftover from the day before and decided to grill them.  Consider it a teaser for a later post). 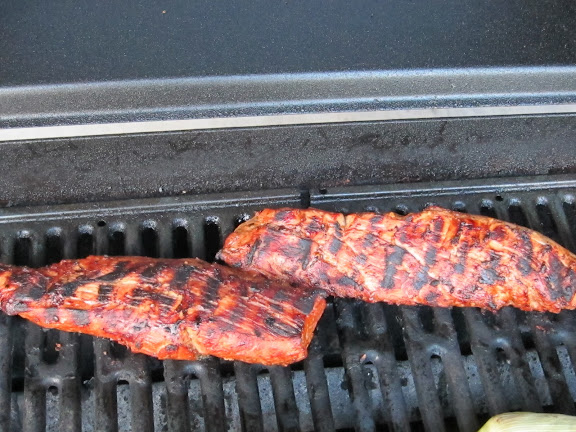 Once the tenderloins have nice grill marks, it’s time to finish them over indirect heat.  Turn off the grill burner directly underneath the pork tenderloins, and keep the other burner(s) on the grill as high as possible.  This creates an oven-like environment in your grill and allows the pork to cook fully without burning on the outside. 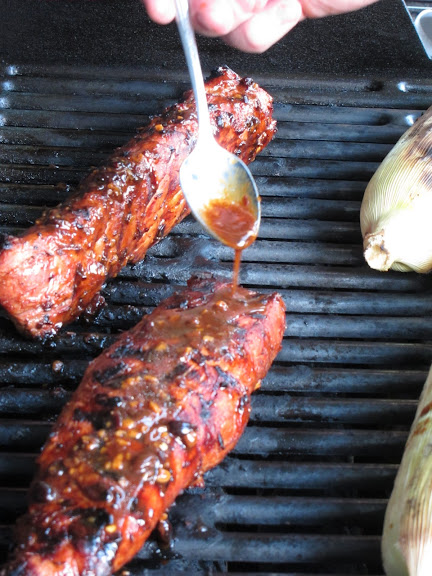 The final step before inserting the meat thermometer and closing the lid to allow the pork to finish cooking is to spoon the remaining marinade over the pork.  This extra step really kicks up the flavor of the pork. 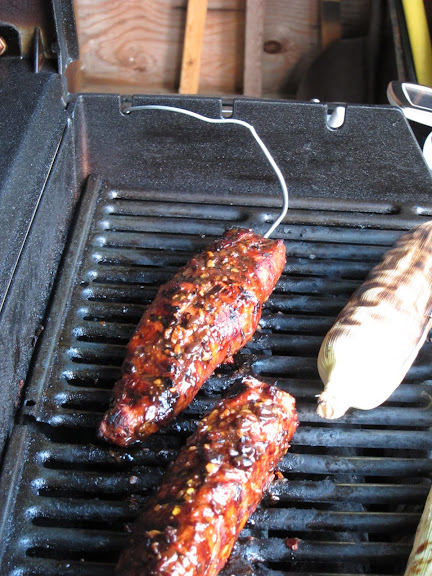 The easiest way to make sure that the meat is fully cooked — without overcooking — is to take its temperature.  There are numerous types of meat thermometers available.  On this night, we used a remote digital thermometer, which has a feature allowing you to set an alarm to go off when the meat reaches the correct internal temperature.  For pork, we set it to 145 degrees. 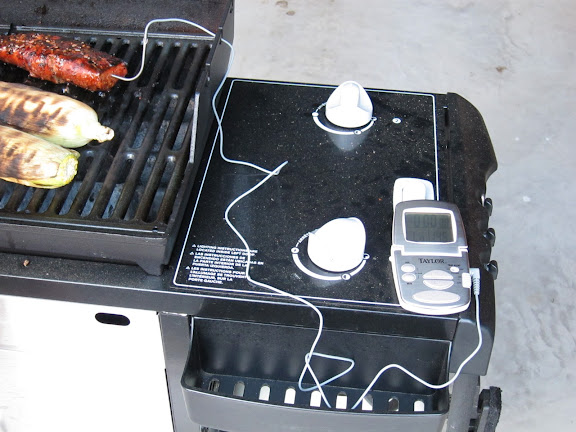 This thermometer also allows you to monitor the temperature of the pork without having to open the lid of the grill.  Pretty handy.  (Grilled corn is almost done too.  Spoiler Alert — it was delicious.) 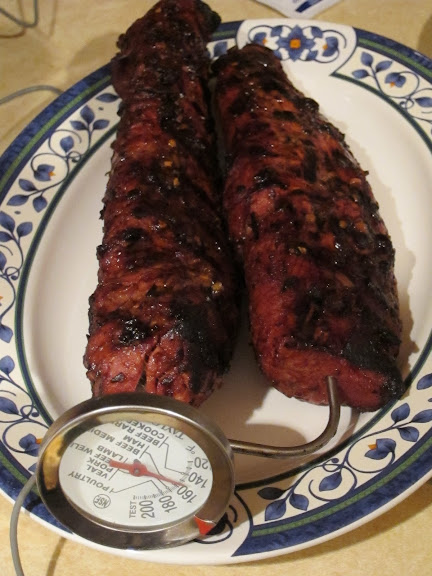 Be sure to rest the pork for 5 minutes after you remove it from the grill, before you slice it.  This allows the juices to redistribute throughout the meat.  We usually tent the resting meat with foil. 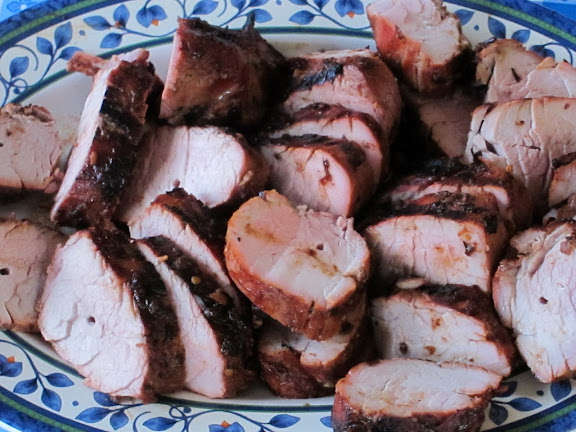 After the pork has rested at least five minutes, it’s time to slice and serve. 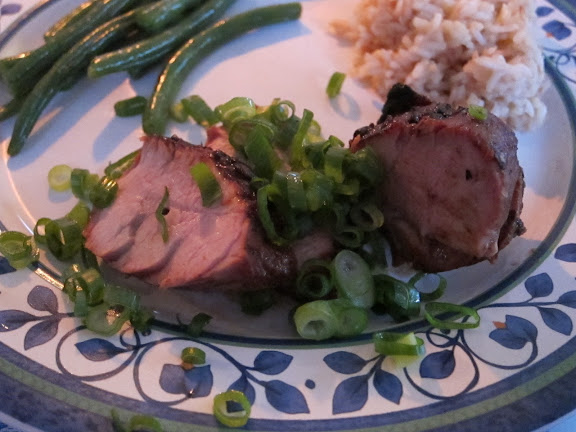 We garnish the finished pork liberally with green onion tops.  On this night, we served the pork with a rice side dish and steamed green beans.

Trim the silver skin and visible fat from the pork tenderloins, and place them in a sealable plastic bag.  Reserve 2 tablespoons of the marinade for later, and pour the remaining marinade in the plastic bag.  Seal the bag and swirl the pork around to make sure that the pork is well coated with the marinade.  Marinate in the refrigerator for at least an hour, up to 8 hours.

Preheat the grill and clean the grates.  Grill the pork tenderloins over direct medium-high heat for approximately 6-8 minutes per side, rotating to make sure that the pork cooks evenly and develops nice grill marks.

Turn off the burner underneath the pork, and turn the other grill burners to high.  Pour the reserved marinade over the pork, insert a meat thermometer into the pork, and close the lid.  The pork will continue to cook for approximately 15 more minutes (but rely on the temperature to determine when it is done).  When the internal temperature of the pork reaches 145-150 degrees, remove the pork from the grill and rest it for 5 minutes.  Slice and serve, garnished with sliced green onion tops.