Time for another Charcutepalooza challenge.  This month’s challenge was “stretching” — as in branching out in the kitchen, extending the uses of the meat and lengthening the time that the food can be safely cooked and eaten.  The Apprentice challenge was rillettes or confit, while the Charcutiere test was galantine or roulade.  Our usual starting point for Charcutepalooza each month is to read Mrs. Wheelbarrow‘s always entertaining and instructive post detailing the challenge — primarily so we can figure out what a lot of these charcuterie terms that we’ve never heard of mean, then to decide which technique we want to try.  This month, however, Dan knew right away that he wanted to make duck confit, after having read about it and tasted it in restaurants on occasion.  I cannot adequately express my relief that we were not going to attempt the galantine, which The Yummy Mummy eloquently (and terrifyingly) explains:  “requires you to flay the skin off the chicken – Spanish inquisition style – in one single piece, debone the whole chicken, make pate out of the forcemeat, fold the forcemeat over the partially-grilled breasts so they are a snug surprise in the middle of the roll, and force all of it back inside the skin – that you just took off the chicken – and poach it in broth.”  Wait, what?  Is this cooking, or a special episode of American Horror Story?!?  Fortunately, duck confit turned out to be one of the easiest — and by far most delicious — Charcutepalooza challenges to date.  It was so easy that we actually felt a little like we were cheating.  And it was so delectable that we were almost mad at ourselves for never having made it before.  (And so good that I actually used the word “delectable.”)  Many thanks to Mrs. Wheelbarrow and The Yummy Mummy for creating Charcutepalooza and introducing us to this amazing delicacy that we can (and will!) so easily make at home. 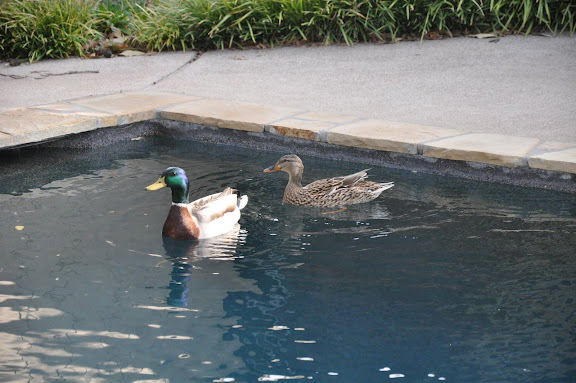 For us, the most difficult part of the challenge was trying to find duck legs.  We searched both of the higher-end grocery stores in our area, but all they had were frozen whole ducks.  Because we wanted to make enough confit for two meals — one now and the other stored in the duck fat in the fridge for a couple of months (which is kind of the point of confit, after all) — we would have had to buy two whole ducks, which aren’t the cheapest poultry around.  And, to stay true to the challenge, we would have had to find uses for all the other parts of both ducks, which I think would have been biting off more than we could chew (so to speak.)  Instead, we found a place online that sells individual duck legs for just $2.95 each.  A lucky thing for these feathered friends of ours whom we have to shoo out of our pool every spring and occasionally in the fall. 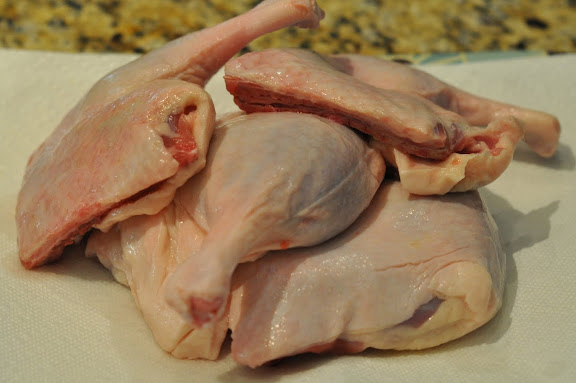 The first step for duck confit is the dry cure, which involves coating the duck with salt and other seasonings, then refrigerating it in a nonreactive container at least overnight and up to 48 hours.  We consulted Michael Ruhlman’s online suggestions for duck confit, as well as the recipes in his book, Charcuterie, and decided to go with simple seasonings of salt, pepper, garlic and bay leaves.  As Ruhlman points out, there are infinite seasoning variations for duck confit, but we were extremely happy with how our simple version turned out, especially for our first attempt. 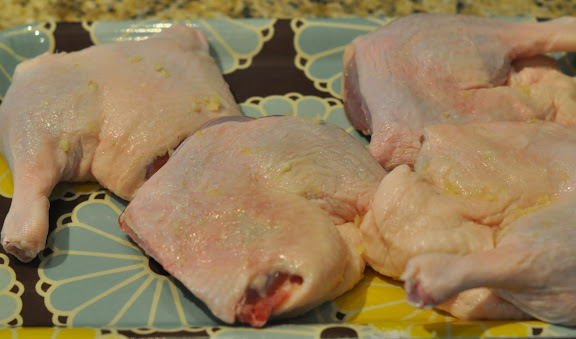 Rub minced garlic on both sides of each duck leg. 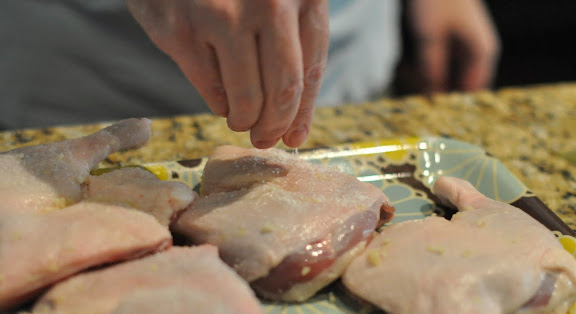 Sprinkle generous portions of kosher salt on both sides of each leg. 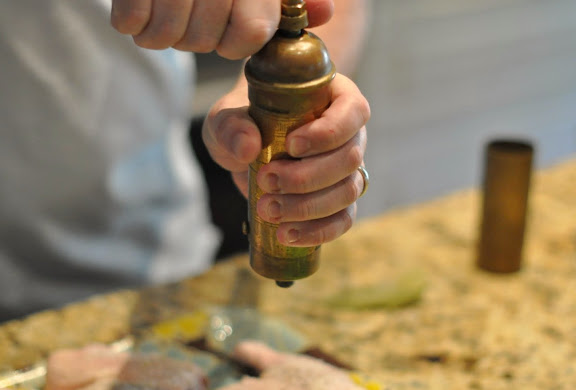 Then season with a generous amount of pepper. 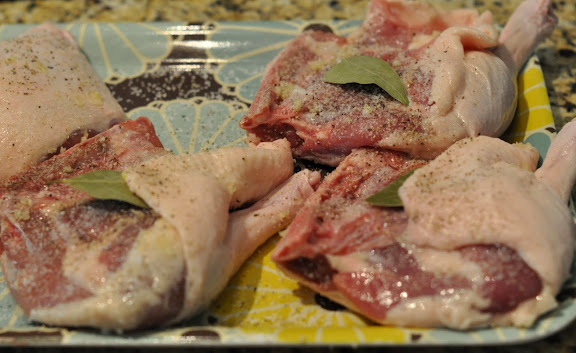 Break the bay leaves in half and tuck a half into the fold of extra skin on the underside of each leg.  (If the legs don’t have this extra fold of skin, just place the bay leaf half on top of each leg.) 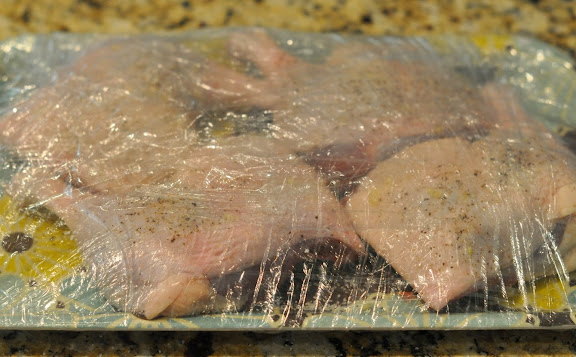 Cover the legs with plastic wrap (or otherwise seal the container you are using), then refrigerate the duck overnight or for up to 48 hours. 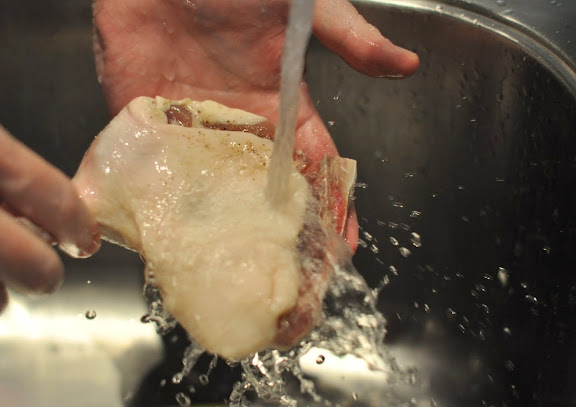 After the duck has cured in the fridge, rinse off all of the salt and other seasonings and pat the duck legs dry with paper towels. 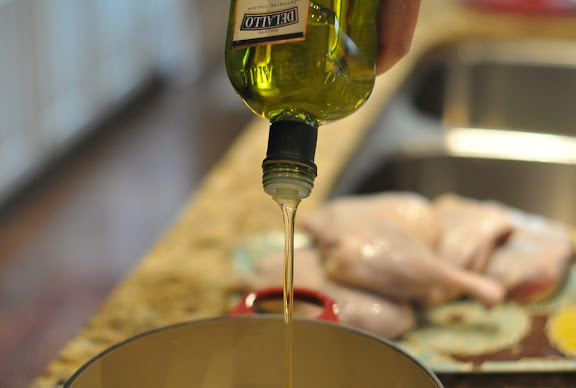 The recipe in Ruhlman’s book calls for cooking the duck in duck fat or lard.  Duck fat can be purchased online, presumably from the same places where you can buy the duck legs.  Another, more ambitious, option would be to buy a whole duck, trim the excess fat and render it to use for the confit.  On his blog, Ruhlman says he cooks the duck in olive oil.  Guess which option we chose?  If it walks like a lazy cook and quacks like a lazy cook . . . We chose door number three — an entire bottle of it.  We used the less expensive store-brand of regular (not extra virgin) olive oil from our local grocery store. 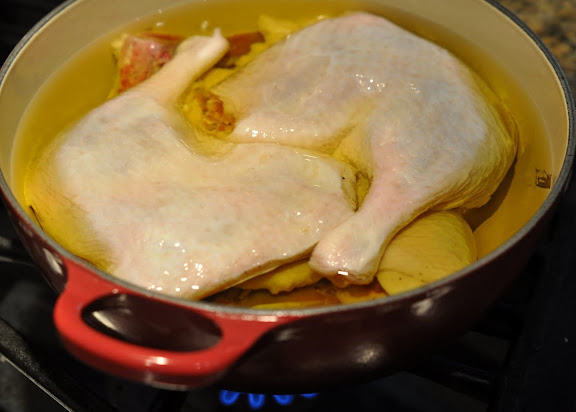 The key to this step is that the duck must be completely covered with the fat or oil.  We layered the duck legs in our Dutch oven, but upon reflection probably should have tried to cram them all in as a single layer so we wouldn’t need as much oil.  Bring the duck-in-oil to a simmer over medium-high heat on the stove, then place the Dutch oven (uncovered) in the regular oven, preheated to 180 degrees.  Cook the duck until the legs are completely tender — anywhere from 6 to way-many-more-than-you-expected hours. 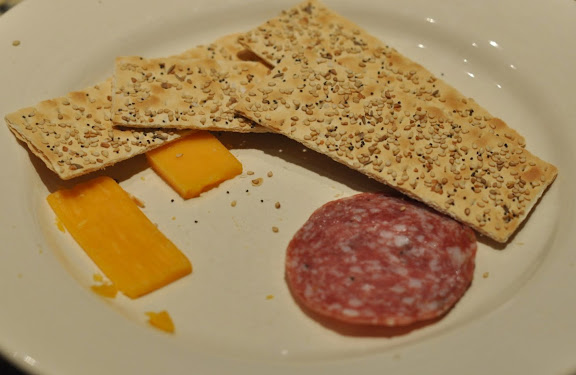 So.  We had planned on cooking and eating the duck confit last Sunday evening.  Yeah, not so much.  The duck took much longer to cook than we planned, then still would need to be cooled and roasted before we actually got to eat it!  Dan called an audible and made us a cheese plate instead. 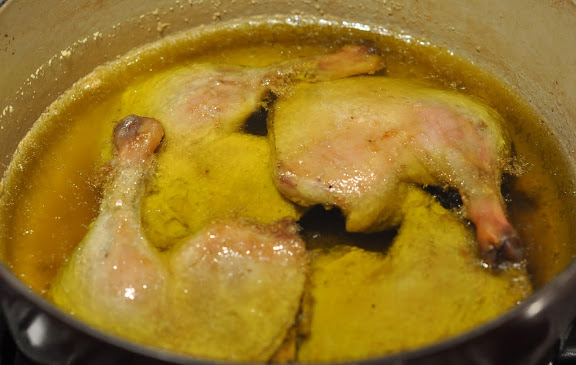 When the duck is (finally!) done (ours cooked for about 9 hours), remove it from the oven and allow it to cool a bit in the pot. 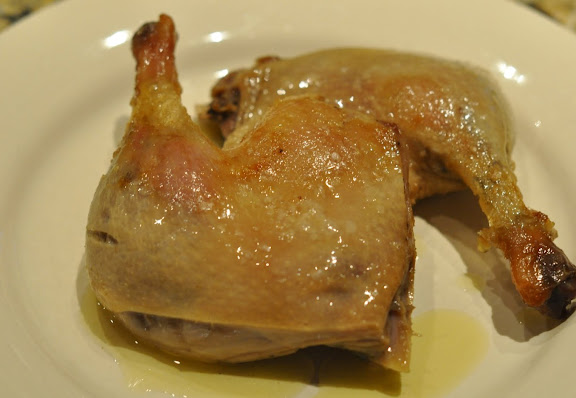 We took 2 of the legs out of the oil, put them on a plate, covered them with plastic wrap and refrigerated them to be used for dinner later that week. 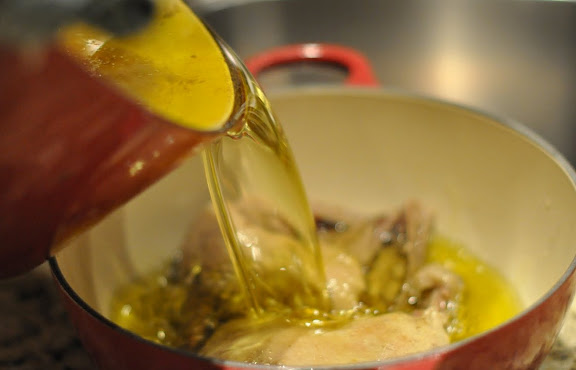 We put the other 2 duck legs in a smaller Dutch oven and poured the warm oil over them until they were submerged. 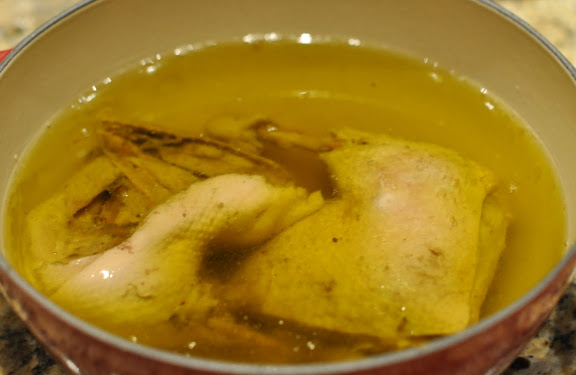 We put the lid on the smaller Dutch oven and can store the duck confit this way in the fridge for a couple of months.  Once the fat has congealed, placing a layer of plastic wrap on top of the fat will keep air from getting in and help with the preservation process.  This preserved duck fat-infused oil can be used in other ways as well.  In fact, we plan to use a couple of tablespoons this weekend to make roasted potatoes and can’t wait to see if we notice a big difference between this and regular olive oil.  Once the duck confit is gone, we plan to store the duck fat in an airtight container in the freezer, since it can be reused for future confit several times before it becomes too salty.  Hey, look – we’re “stretching” an ingredient! 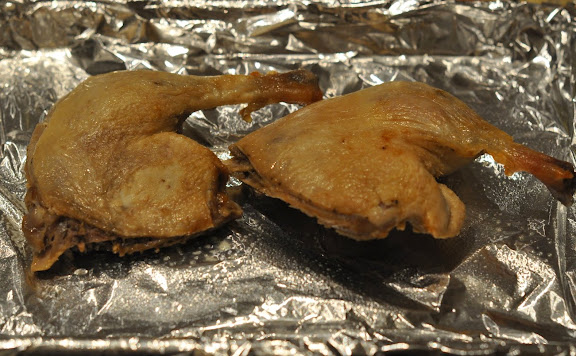 Prior to serving the duck confit, remove it from the fridge and allow it to rest at room temperature for a few minutes.   Then roast the duck in a baking pan or on a cookie sheet (we covered ours with foil, since we were unsure of how much fat splatter there would be — not much) in the oven preheated to 425 degrees until the meat is warmed through and the skin is crispy — about 15-20 minutes. 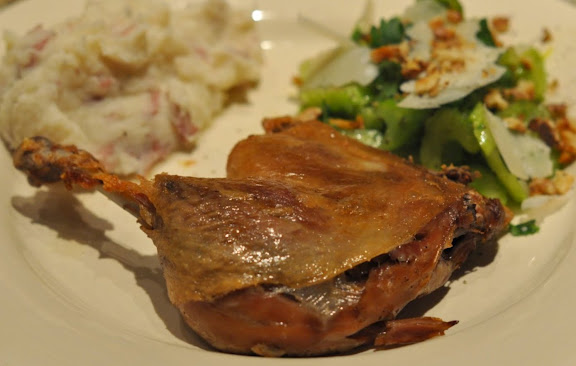 Oh, crispy duck confit skin — you are my new best food friend.  Almost as good as the beautifully tender, rich and flavorful duck meat.  We served our duck confit with smashed potatoes and celery salad for what tasted like an amazingly extravagant meal on a Tuesday night.  There are almost as many ways to serve duck confit as there are ways to season the duck.  Ruhlman suggests serving it on a salad with a poached egg, or with white beans and pork belly, or as a filling in a corn tortilla — just to name a few.  We look forward to trying them all!