Prior to this recipe, Dan had never cooked with dried mushrooms, but had always been meaning to try them.  We came across an online sale of a variety of dried mushrooms from a site that sells a lot of cooking stuff, so we decided to try them.  I found a recipe in one of our Cook’s Illustrated magazines for this “Quick Mushroom Ragu,” under the byline asking “Is it possible to achieve deep, satisfying flavor in just 30 minutes?”  The answer is a resounding yes, thanks to those talented folks at America’s Test Kitchen.  This recipe achieves the rich flavor you would expect from a sauce made up of numerous complicated ingredients that cooked all day, yet it’s a relatively quick and easy dish to make with a reasonable amount of accessible ingredients — dried porcini mushrooms, portobello mushrooms, chicken broth, pancetta, olive oil, garlic, tomato paste, rosemary (or thyme for rosemary haters like me), tomatoes, and salt & pepper.  Serve over spaghetti or whatever other pasta you like, and garnish with grated pecorino romano or parmesan cheese.  Simple recipe with fancy flavor — one of my favorite combinations. 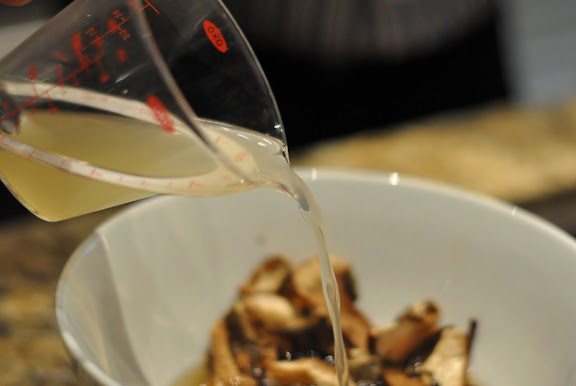 Although we bought our dried ‘shrooms online, we’ve also seen them in our local grocery store, usually near the section with fresh herbs in the produce area.  There are probably many different ways to reconstitute these funghi to get them ready for cooking, but we went with the easiest method we could find, because that’s how we roll.  The original recipe calls for steaming the porcini in chicken broth in the microwave for about a minute and letting them rest until the mushrooms soften — about 10 minutes. 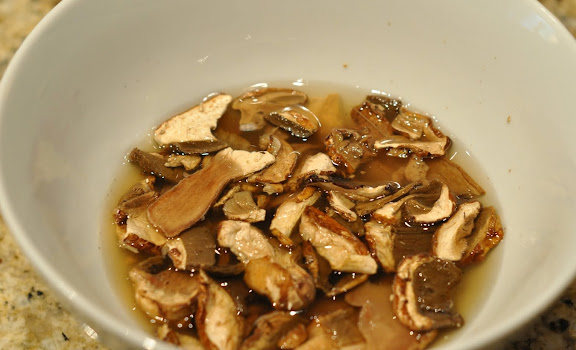 Instead, we skipped the steaming (our microwave has never worked — don’t get Dan started on that issue), and let the porcini rest in the chicken broth at room temperature for about 15-20 minutes.  Never having used dried mushrooms before, we assume that our method still allowed the funghi to reach their appropriate level of re-constitution.  Whatever that means. 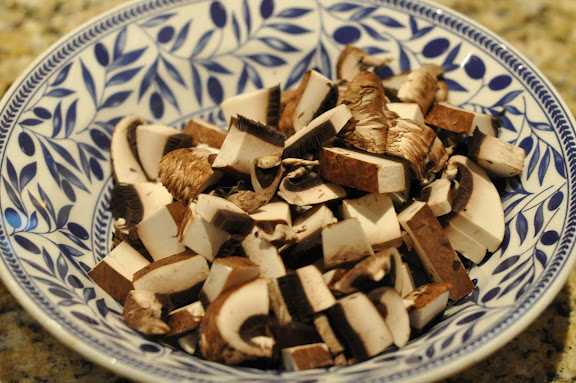 While the dried porcini regain their constitution, chop the portobello mushroom caps into 1/2 inch pieces.  The recipe also says to “scrape the dark brown gills from the portobellos.”  Yeah, we didn’t do that either.  Pretty awesome how we took a “quick” recipe and made it even quicker (but still delicious) by skipping steps, no?  Yes. 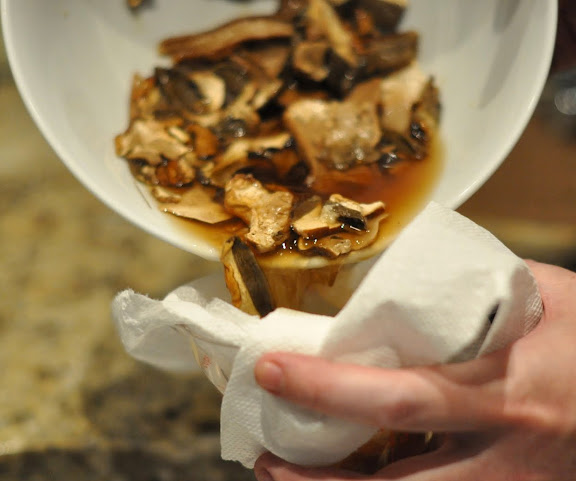 Drain the reconstituted mushrooms through a paper towel into a measuring cup, so that you can use both the mushrooms and the chicken broth in the sauce, without the dried fiber-y, shroom-y bits. 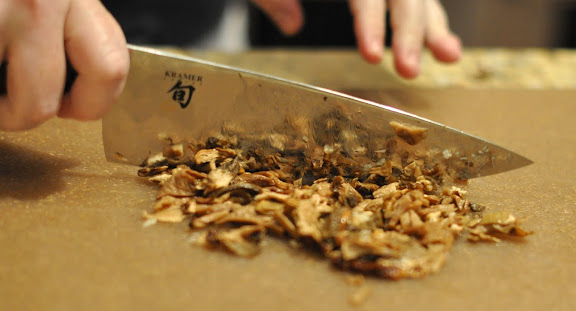 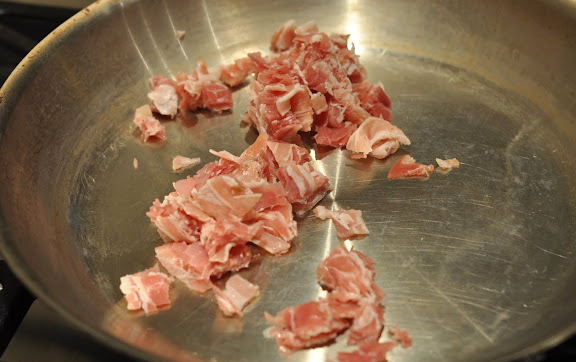 Also chop up some pancetta into 1/2 inch pieces. 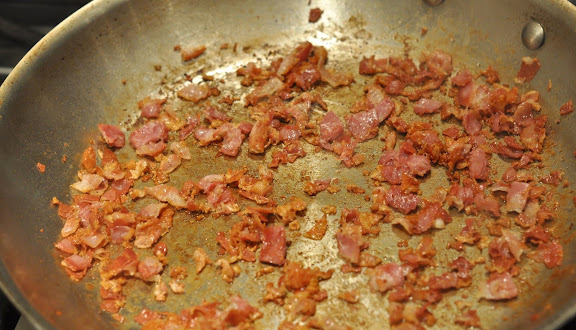 Heat the pancetta over medium heat until the fat is rendered and the pancetta is browned and crisp — about 7-10 minutes. 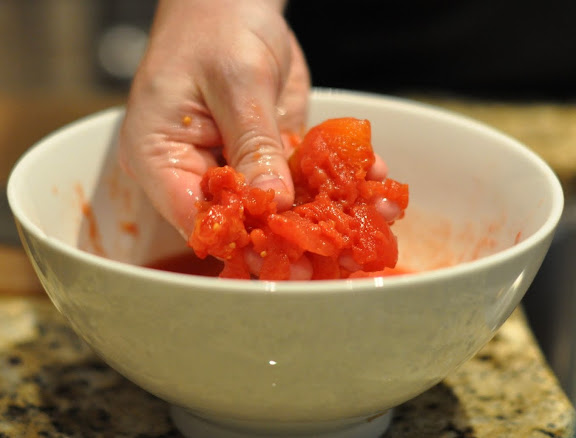 The recipe calls for canned whole tomatoes “roughly crushed by hand,”  which conjures images of “HULK.  SMASH.  TOMATOES.”  Maybe better to say crush them roughly?  Crush them into rough pieces? 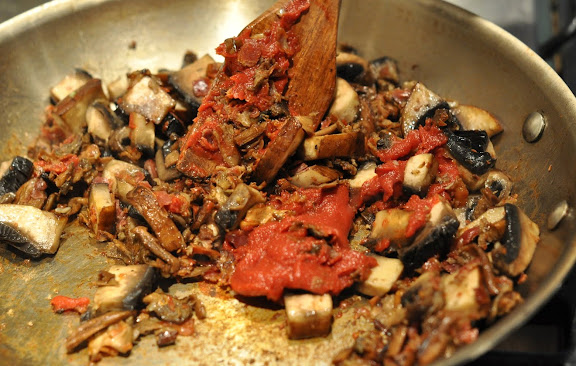 Next, add the portobellos, porcini, olive oil, garlic, rosemary (or thyme) and tomato paste to the skillet with the pancetta. 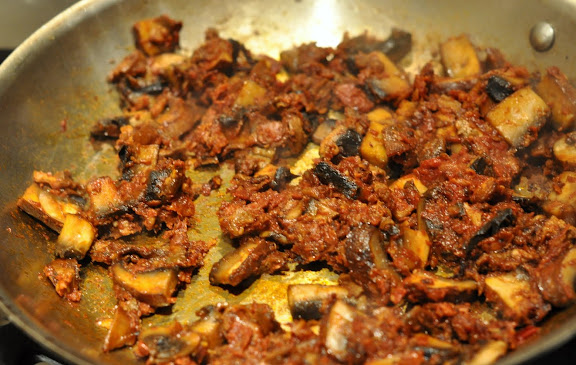 Cook over medium heat until the tomato paste starts to brown — about 5-7 minutes. 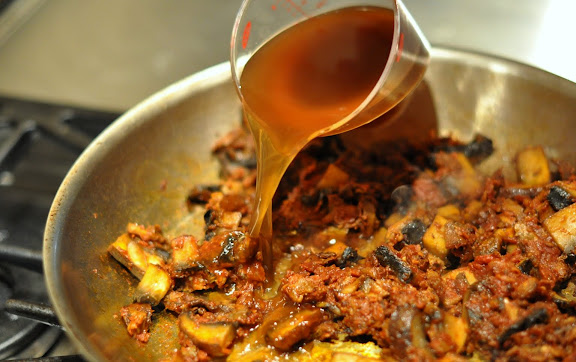 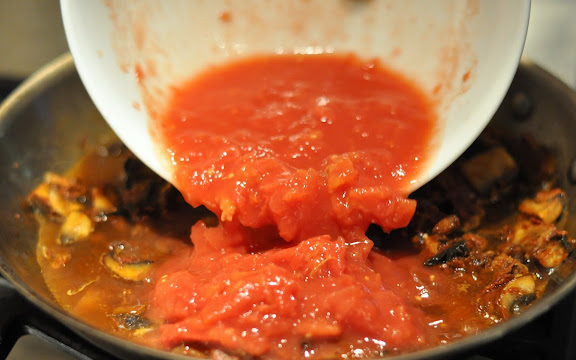 …and the roughed-up tomatoes with their juices… 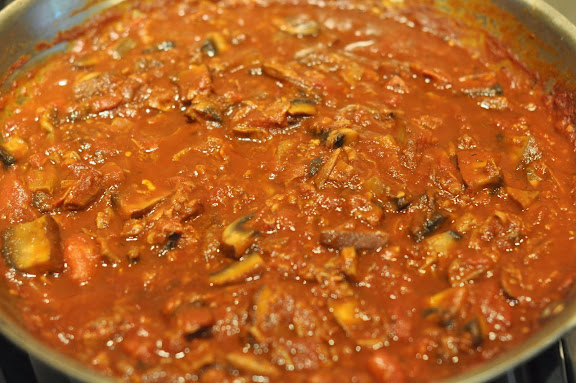 …bring the sauce to a simmer, then reduce the heat to medium-low and cook until thickened — about 15-20 minutes. 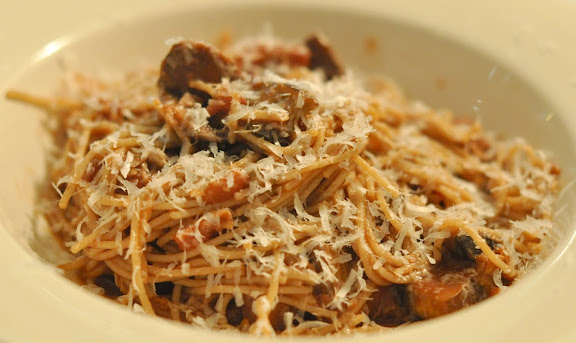 Serve over spaghetti (or linguine, or angel hair pasta, or whatever you like), garnished with grated pecorino or parmesan cheese.  We loved this rich, hearty & (mostly) vegetarian dish and will definitely make it again.