Way back when it was still winter here in Texas, we had a snow/ice storm.  While we were “snowed in,” Dan wanted to cook some comfort food, but something a little different than the usual stew, chili or casserole.   He found this recipe, which incorporates pork, jalapenos, tomatillos and other yummy Tex-Mex ingredients.  The “verde” in this dish comes from the deliciously tart tomatillos, perfectly balanced against the spice of the jalepeno peppers. 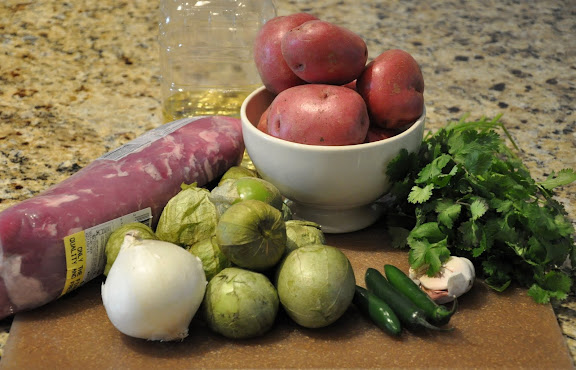 The ingredients include pork tenderloin, garlic, tomatillos, jalapenos, cilantro, onion, vegetable oil, chicken stock and salt and pepper.  The original recipe did not call for potatoes, but Dan thought they would be a nice addition.  He was right. 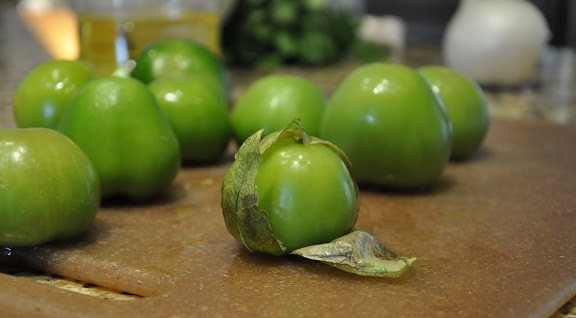 Fun fact:  A tomatillo is from the tomato family and is related to the gooseberry (an even more obscure produce item).   Tomatillos come in a paper-like husk that you peel off before cooking with the fruit.  You can find them in the produce section of the grocery store.

After peeling the tomatillos, roast them and the jalapenos under the broiler long enough to blacken the skin — about 5-7 minutes.  You could also roast some poblano or Anaheim peppers if you want even more chile flavor. 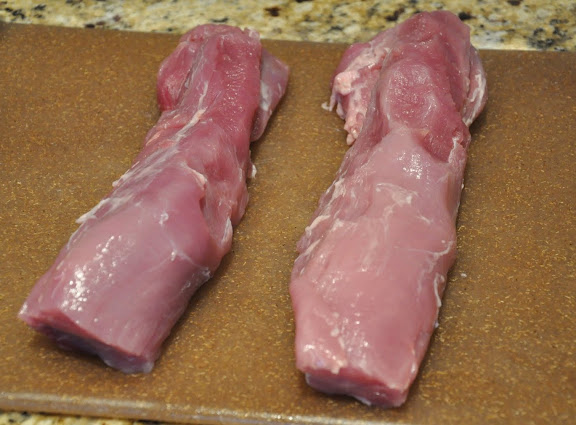 Trim the visible fat from the pork. 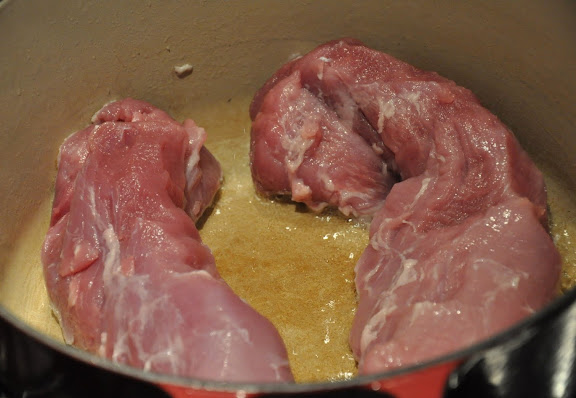 Heat a couple of tablespoons of vegetable oil in a Dutch oven over medium-high heat, then add the pork and brown it on all sides. 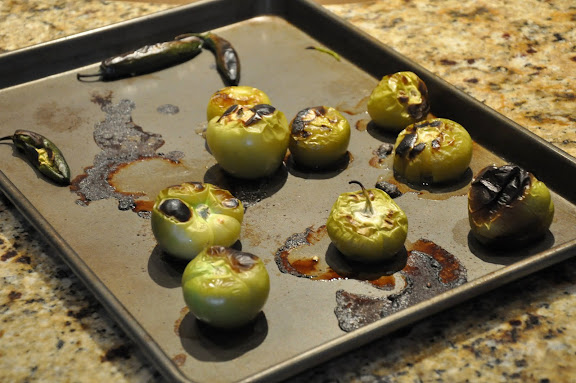 While the pork is browning, let the roasted tomatillos and peppers cool off a little bit before the next step.  A good way to remove the skin from the jalapenos (or whatever pepper you are using) is to place them in a paper bag to cool, then peel off the skin.  You’ll also want to remove the stem and seeds from the peppers.  Leave the skin on the tomatillos. 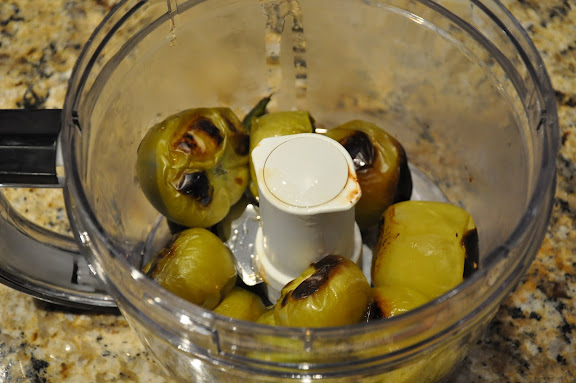 Place the tomatillos and peppers in a food processor and pulse until they are finely chopped. 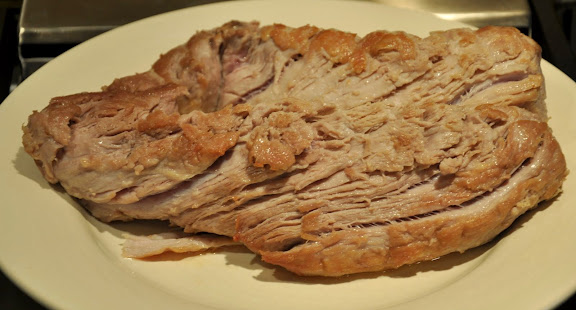 Remove the browned pork to a plate and set it aside. 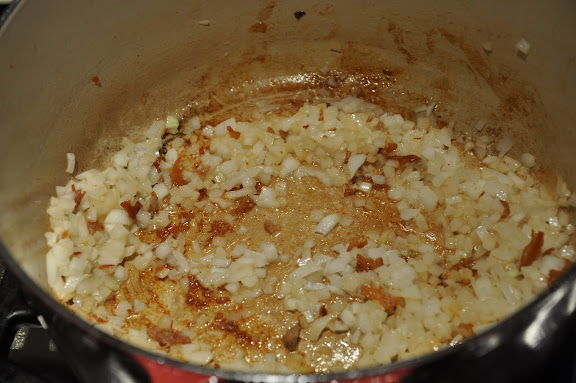 After removing the pork from the Dutch oven, add a few teaspoons of oil if the Dutch oven is dry.  Then cook the onion over medium heat, stirring occasionally, until the onion becomes soft and translucent — about 5-7 minutes. 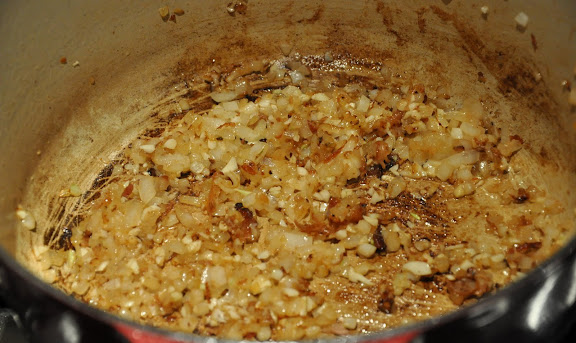 Just before the onion is done, stir in the minced garlic and cook for about a minute. 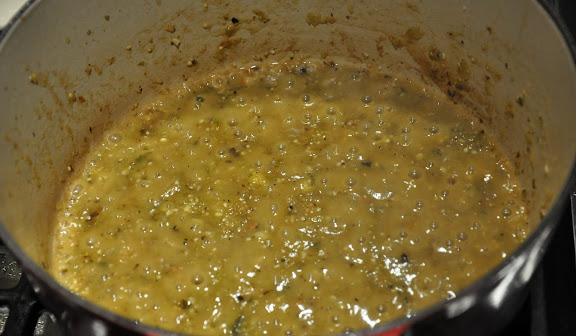 Add the tomatillo/pepper mixture to the onion, then add the chicken stock and season with salt and pepper.  Bring the ingredients to a boil. 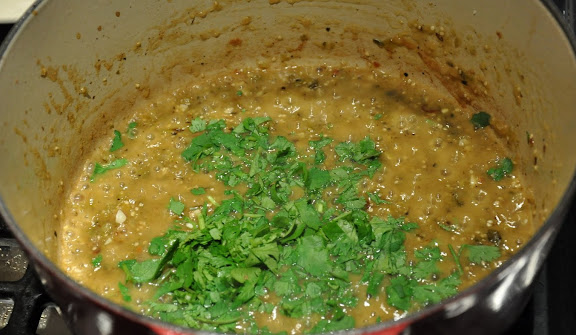 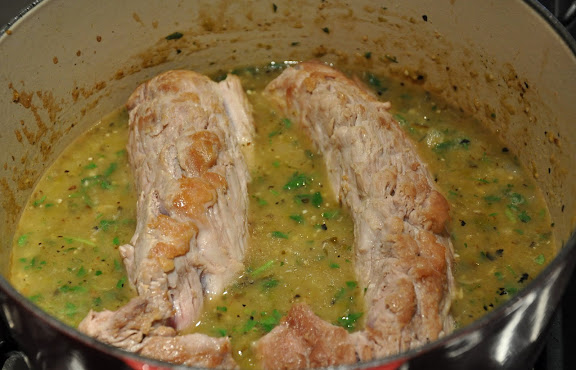 …then add the pork and any juices that accumulated on the plate.  There should be just enough liquid in the Dutch oven to reach the top of the pork, so you may need to add a little more chicken stock.  Reduce the heat to simmer and cook the pork (uncovered) until it is fork tender — about 2-3 hours. 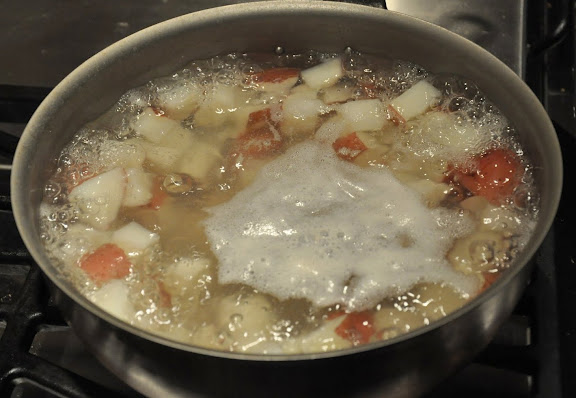 When the pork is almost done, prepare the potatoes by cutting them into bite-sized pieces and boiling them for about 10 minutes.  They will finish cooking in the Dutch oven with the other ingredients. 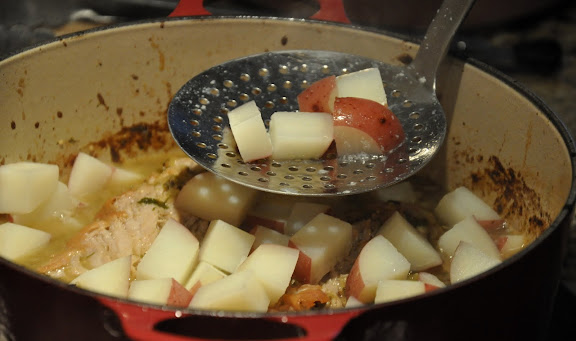 Add the potatoes to the pork mixture and continue cooking until the pork and potatoes are done — about 15-20 minutes. 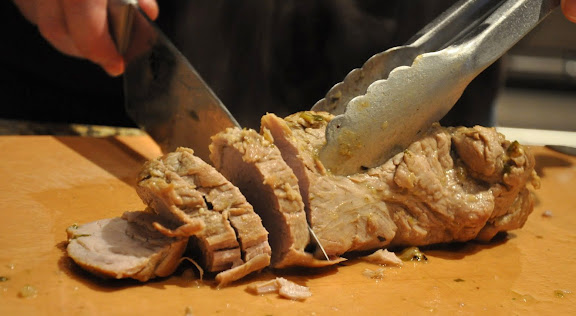 When the pork is done, remove it to a cutting board and slice it into big pieces.  It should be pretty tender at this point. 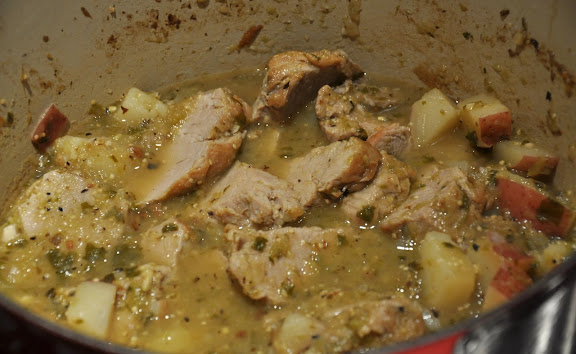 Add the pork back to the Dutch oven and stir it in with the other ingredients. 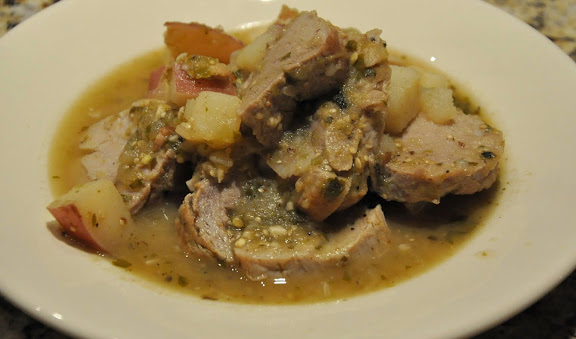 Serve the pork in a low bowl with some good crusty bread on the side for dipping in the tangy, spicy broth.  If you live in a climate where the weather is still chilly, this dish is a good combination of warm and hearty with a hint of Spring from the salsa verde flavor.  This recipe has also inspired us to cook with tomatillos more often.  One of our readers suggested adding some sort of verde sauce to our slow-cooker pork enchiladas, which we think is an excellent idea (thanks Matt H!)

Add the tomatillo/pepper mixture to the onion, then add the chicken stock and season with salt and pepper.  Bring the ingredients to a boil.  Next add the cilantro and the pork (with accumulated juices).  Add more chicken stock if necessary to make sure the liquid reaches the top of the pork.  Reduce the heat to simmer and cook, uncovered, until the pork is fork tender — about 2-3 hours.When the pork is almost done, boil the potatoes for about 10 minutes in a separate pot.  Then add the potatoes to the Dutch oven and continue cooking the potatoes with the pork until everything is done — about 15-20 minutes.

When the pork is done, remove it from the sauce and cut it into big pieces.  Add the pork back to the Dutch oven and stir everything together.  Serve the stew in low bowls with crusty bread.