As self-described foodies, we spend a lot of time looking for interesting recipes and different ways of cooking food. Dan recently came across a photo of “Hasselback Potatoes” and was immediately intrigued.  We’d never seen or heard of this type of potato dish before, but liked how they looked and decided to research some recipes.  We were surprised to discover how easy they are to make, considering how complicated and fancy they appear.   And they taste as good as they look — sort of like gourmet home-fries. 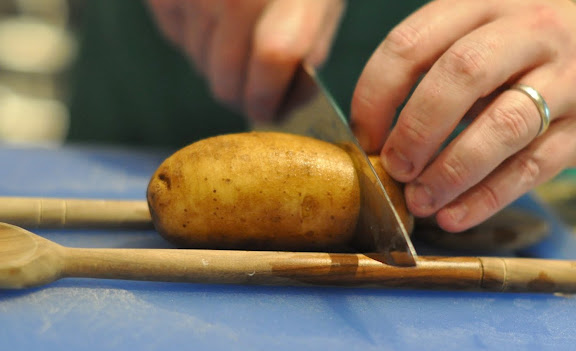 The most difficult thing about preparing these potatoes is cutting them, which actually isn’t that difficult at all.  Wash the potatoes first, or peel them if you prefer them that way.  We left the skins on for enhanced potato flavor.  Place the potatoes in a bowl of cold water to prevent them from browning while you cut them.  Working with one potato at a time, place each potato lengthwise in between two wooden spoons (you could also probably use chopsticks or something of a similar size and shape.)  Make crosswise cuts in the potato from one end to the other, about 1/4 of an inch apart, being careful to stop cutting at the point where the knife touches the spoon handles. 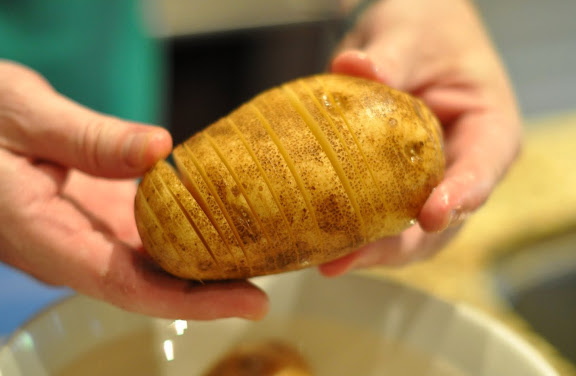 Cutting the potatoes this way will ensure that there is a “base” on the bottom of the potato keeping the slices in place, but allowing for the pieces to fan out a bit so you can brush butter in between the slices. 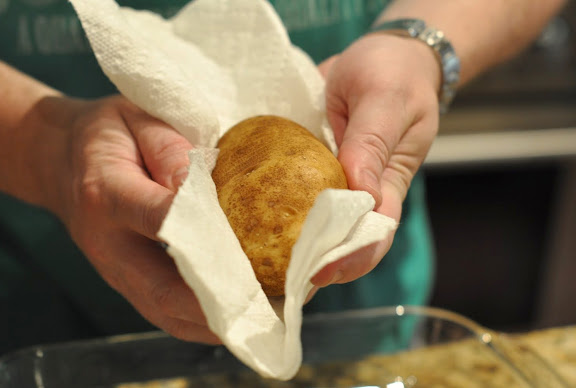 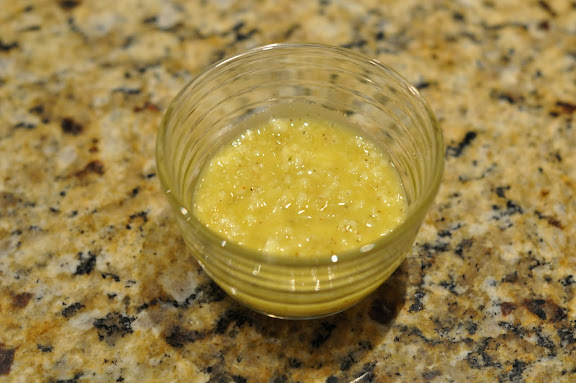 Mix together the warmed butter, olive oil, granulated garlic and salt and pepper. 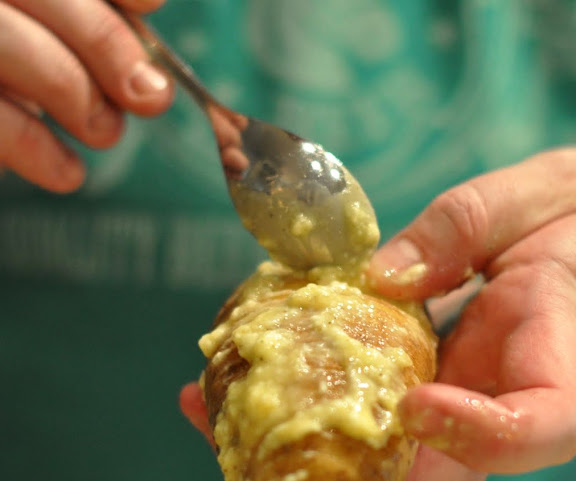 Using a spoon (or maybe a basting brush), coat each potato with the butter mixture.  Be sure to get plenty of butter in between the slices. 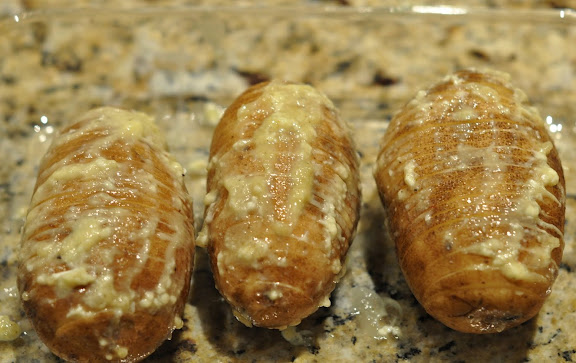 Place the potatoes in a baking dish and bake them in the oven preheated to 400 degrees until they are done — about an hour total. 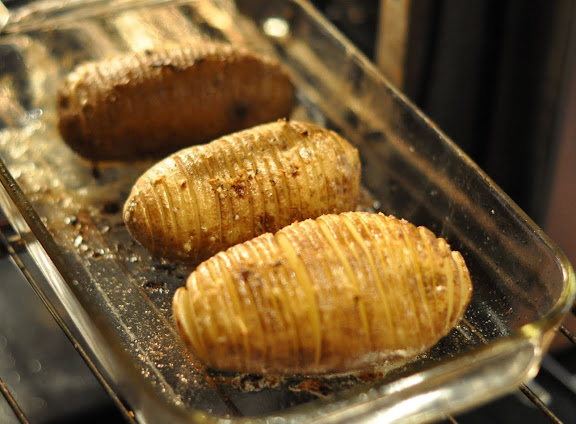 About halfway through the cooking process, spoon some of the butter mixture from the bottom of the baking dish over each potato and in between the slices. 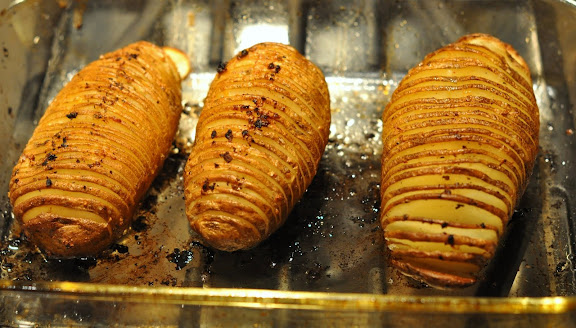 The potatoes are done when the outsides are a little bit crispy and the insides are soft.  (We probably could have cooked ours a little longer.)  Some of the recipes we found call for sprinkling breadcrumbs on top of the potatoes and either broiling them for the final 10-15 minutes or continuing to bake them.  One recipe calls for adding grated Romano cheese to the breadcrumbs for the final 20 minutes of baking time.  We may try the cheese and breadcrumbs next time. 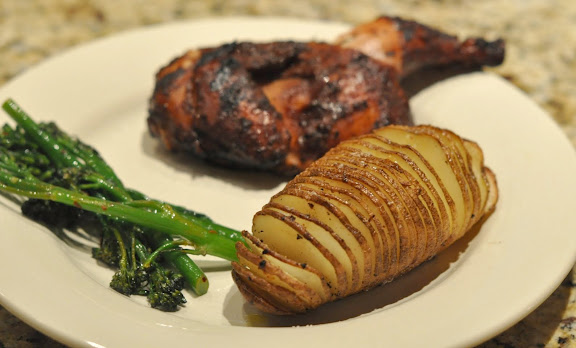 We served the potatoes with broccolini and BBQ game hen.  This side is a wonderful addition to our potato repertoire and would be an impressive presentation for a dinner party.  We like the versatility of these potatoes as well — you could use many different combinations of ingredients in the butter mixture, and you can garnish the potatoes in a variety of ways (we’re thinking drizzled sour cream, grated cheddar cheese, chives and/or crumbled bacon — for a dressed baked potato with a more sophisticated look.)

Wash the potatoes, or peel them if you prefer them without skin.  Place the potatoes in a bowl of cold water so that they do not brown while you are cutting them.  Working one potato at a time, place each potato lengthwise in between the handles of two wooden spoons placed parallel to each other.  Cut crosswise slits in the potato from one end to the other, about 1/4 of an inch apart.  For each cut, stop when the knife touches the spoon handles, so that a ”base” will remain along the bottom of the potato.  Place each cut potato back in the cold water until you are finished cutting all of them.

Mix together the warmed butter, olive oil, granulated garlic and a dash each of salt and pepper.  Pat the potatoes dry with paper towels.  Using a spoon or basting brush, coat each potato with the butter mixture.  Be sure to get plenty of butter in between the slits of the potato.  Place the potatoes in a glass baking dish.

Bake the potatoes in the oven preheated to 400 degrees for about an hour total.  Halfway through the cooking process, spoon the butter mixture from the bottom of the dish over each potato and in between the slits.  The potatoes are done when they are crispy on the outside and soft in the middle.  Salt and pepper to taste.

Optional Step —  For the final 20 minutes of cooking time, sprinkle breadcrumbs (with or without grated Romano cheese mixed in) over the tops of the potatoes and continue baking.