We love pizza.  As you may know, we recently discovered how easy it is to make pizza dough at home.  Since then, we’ve made several different kinds of pizza, including this rather unusual Potato Leek Pizza from the Pioneer Woman’s cookbook.  Leeks are in season around here and this is a really good way to use them.  Think of the best loaded baked potato you’ve ever had, but even better because it’s in the form of a delicious thin-crust pizza. 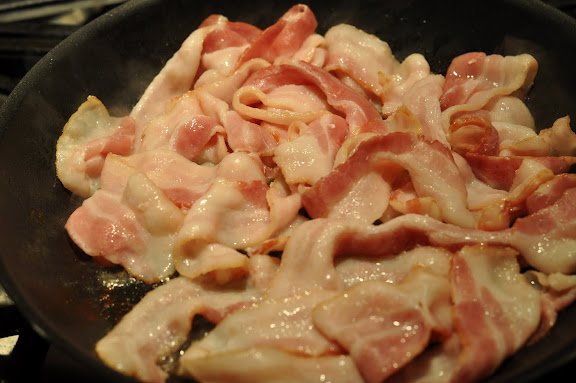 Start by frying bacon in a skillet over medium heat. 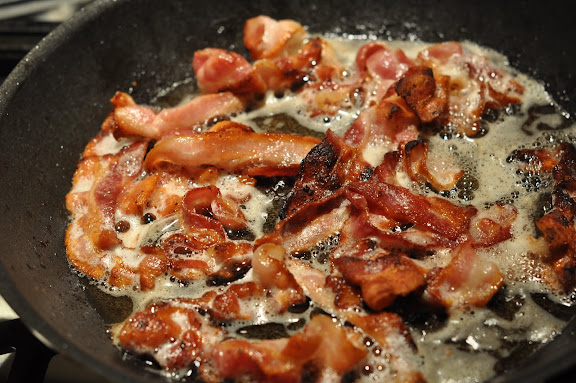 Cook the bacon until it’s done, but not too crispy.  It will cook a little bit longer in the oven on the pizza. 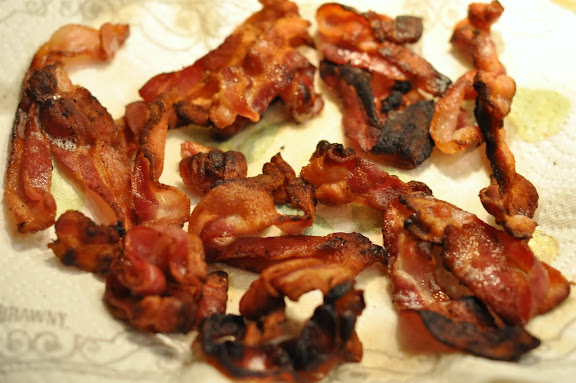 Remove the bacon and drain it on a paper towel on a plate.  We may have accidentally over-cooked ours a bit, but the end result was still delicious. 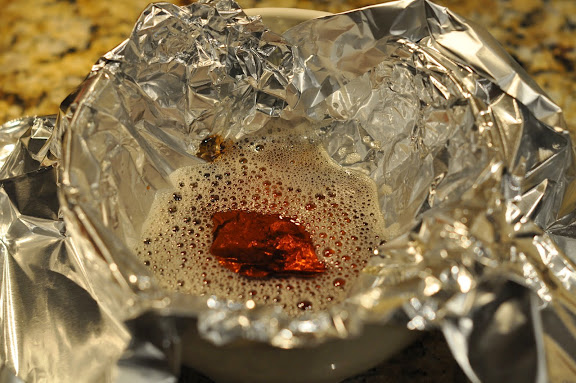 Pour out most of the bacon grease, but do not clean the pan because you’ll be using it to cook the leeks.  Dan’s brother (Hi Jerry!) has a genius method for getting rid of bacon grease — he puts foil in a bowl, then pours the grease into the foil.  Once the grease cools and congeals a bit, just close up the foil and throw it in the trash. 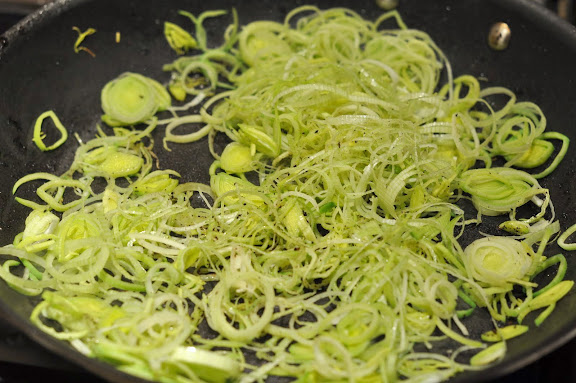 Prepare the leeks by rinsing them, then cut off the tops (the part with the roots) and thinly slice them.  You only want to use the white and light green parts of the leeks. 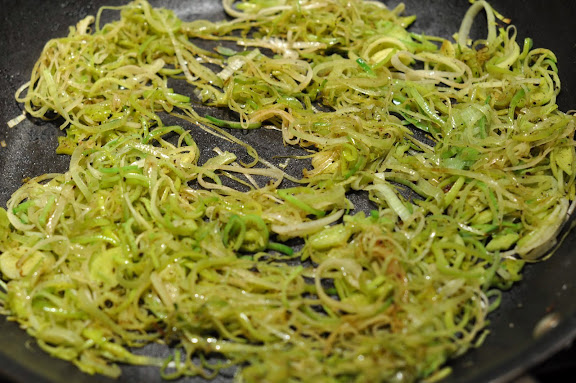 In the same pan used to cook the bacon, saute the leeks over medium-low heat for a few minutes until they are soft.  Then remove the leeks from the heat and set them aside. 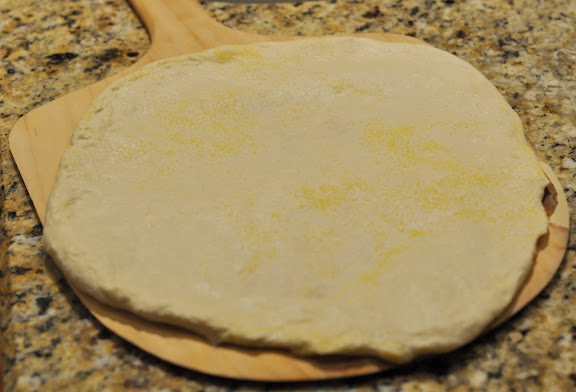 Shape the pizza crust into your pizza shape, drizzle lightly with olive oil and sprinkle with salt.  Dan coats the pizza peel (the fancy wooden thing used to move the pizza in and out of the oven) with a layer of cornmeal to keep the pizza dough from sticking to the peel.  On this night, Dan ended up having to flip and reshape the dough because he wasn’t happy with the original shape, so there is a bit of cornmeal on top of the dough.  No worries though, the pizza still turned out great! 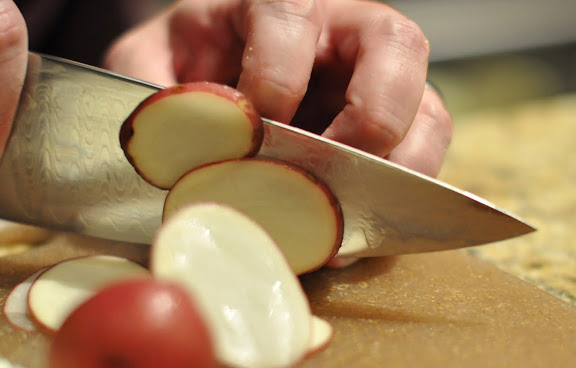 Right before you put them on the pizza, slice the potatoes into very thin pieces. 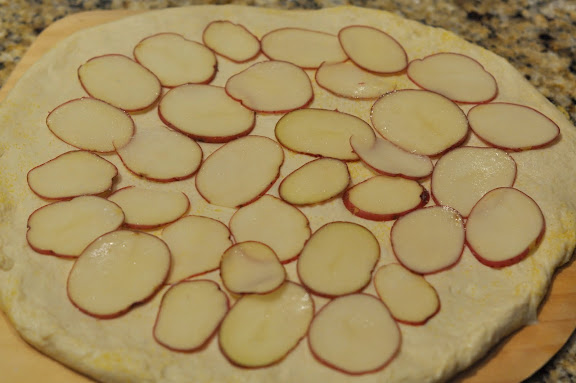 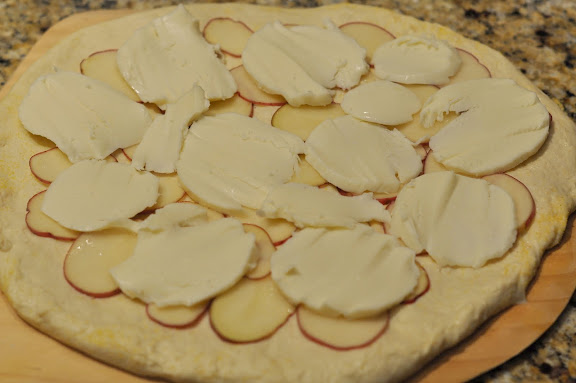 Next, place slices of fresh mozzarella on top of the potato layer. 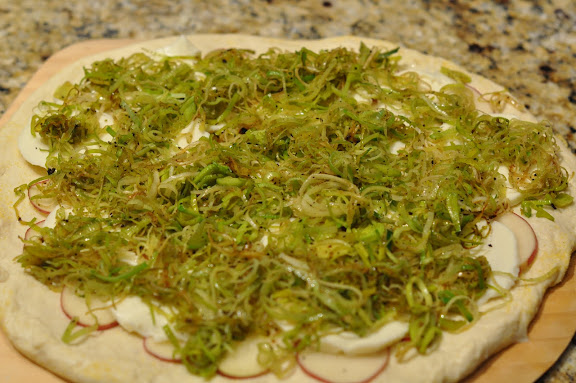 Then layer the leeks on top of the cheese. 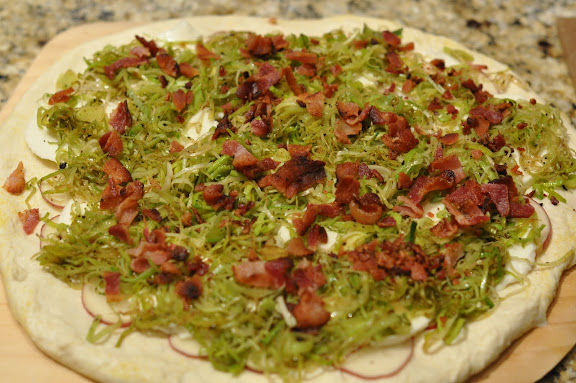 Next add the fried bacon, crumbled into small pieces. 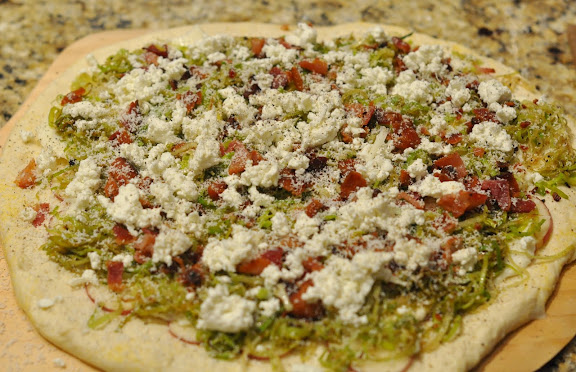 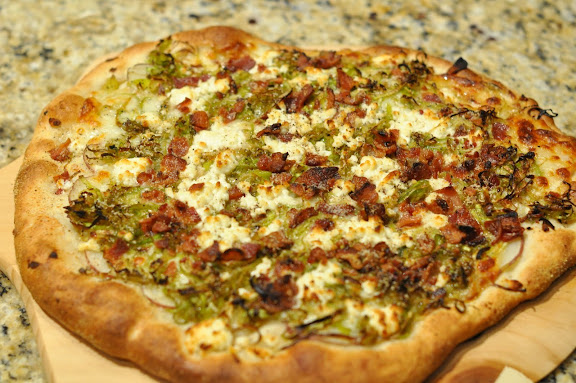 Bake the pizza in the oven preheated to 450 degrees for 8-10 minutes, until the edges of the crust are golden brown and the cheese is bubbly. 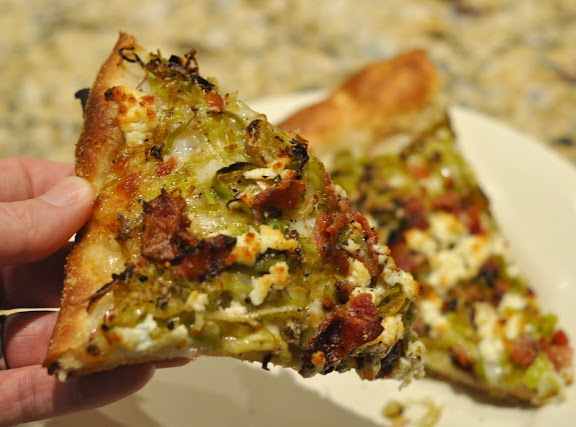 Cut and serve warm.  Even though it may seem a little odd, this pizza is really delicious.  If you like potatoes, leeks and bacon, give it a try!  (We also recommend [in a completely unsolicited and uncompensated way] the Pioneer Woman’s cookbook – if you enjoy her blog, you’ll like her book too!)