For the past several years, Dan and I have made it a point to stay in on New Year’s Eve. He cooks something different and maybe a little more extravagant than usual, then we watch a classic movie. It’s a relaxing way to celebrate the end of the year, as well as the end of the usually hectic holiday season. This year, we decided to cook mussels in a champagne broth and watch the movie “Vertigo.”  We had a lovely evening.  Happy New Year! 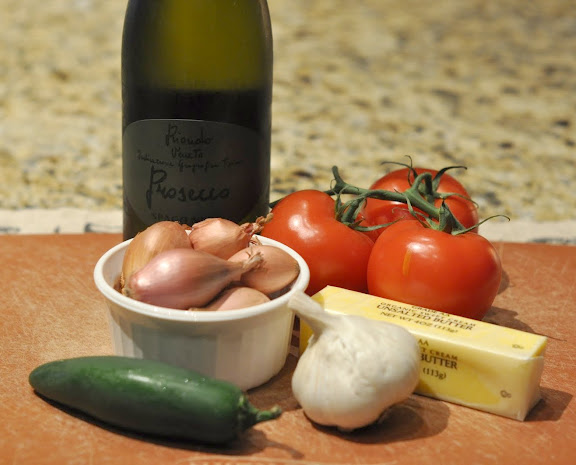 Dan came up with this recipe many years ago, inspired by a wonderful dinner with friends at Green Room.  We had the tasting menu with wine pairings, and the appetizer was mussels in a champagne broth, paired with champagne to drink.  We loved them, and Dan eventually came up with his own, similar recipe.  He created the recipe so long ago that we really can’t remember why we call them “Engagment Mussels” (we got engaged when we took a trip to Mexico, about 7 years ago, with nary a mussel in sight), but for whatever reason, the name stuck and that is what we have always called them. 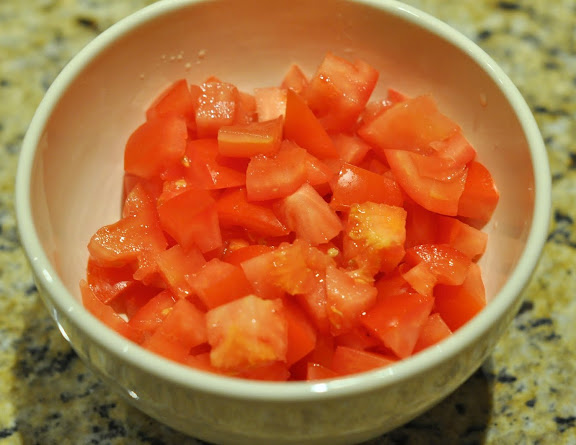 First, chop up some tomatoes.   Since they will cook a bit in the broth, remove the seeds and juices so you’re left with just pieces of tomato. 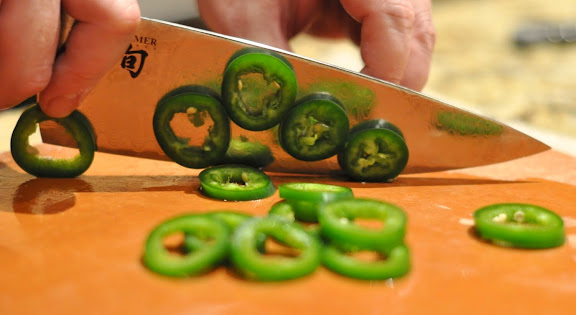 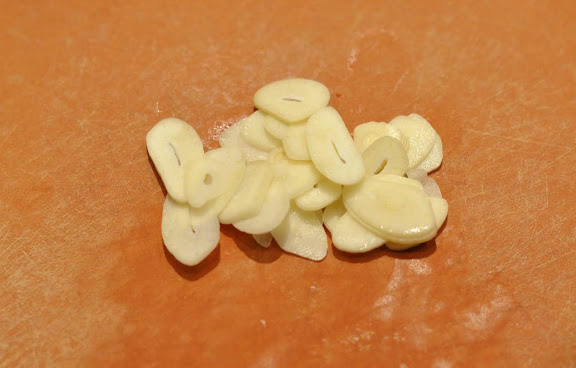 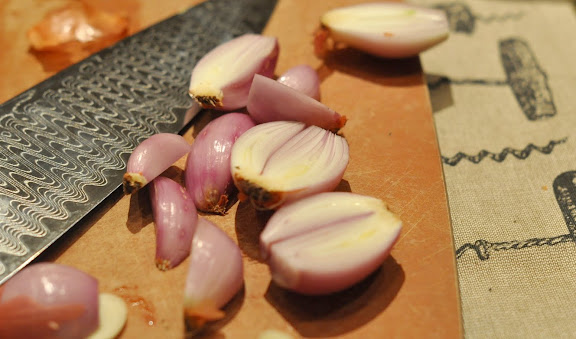 Chop several shallots in half…. ….then peel off the outer layer (similar to an onion)…

….and slice the shallots into thin crescent shapes. 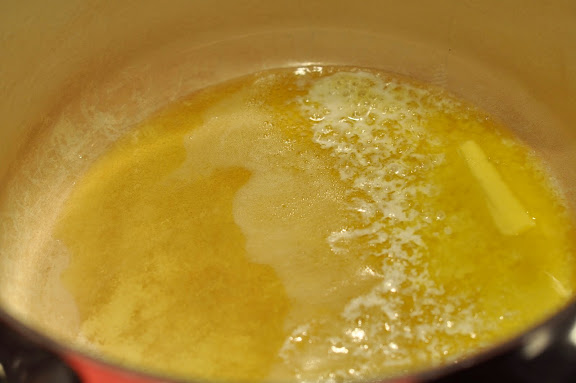 Melt half a stick of butter over medium heat in a dutch oven (yes, it’s a lot of butter, but as long as you don’t drink the broth — as much as you might want to — it’s not that bad for you).

Whenever we make this recipe, we buy fresh mussels from Central Market.  They package the mussels in a plastic bag on ice, which you should put in the fridge until you’re ready to cook them.  “Fresh” in terms of mussels means that they are still alive, which they need to be up until the point you cook them.   We usually buy them that day, or the day before at most.  The mussels may survive purchase-to-cooking time longer than that, but we’ve never tried it.  FYI, don’t close up or seal the bag when you put it in the fridge, or the mussels may die because they don’t have enough oxygen (and you may or may not irritate the chef, faced with the possibility of having to go back to Central Market to get replacement mussels on one of the busiest foodie shopping days of the year.) 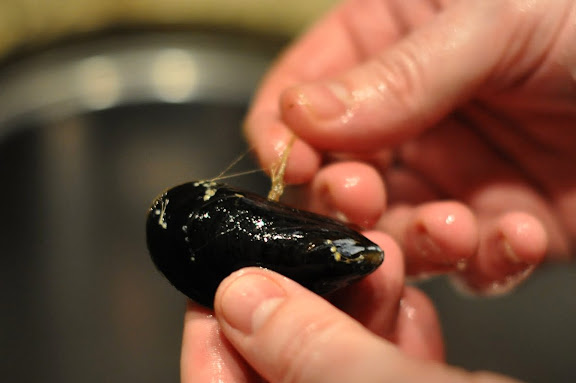 Cleaning the mussels before cooking them involves removing the “beard” from each mussel.  We’re not really sure what that is (and in the interest of me still enjoying mussels in the future, I’m not going to Google it), but removing it is easy — just pull it off. 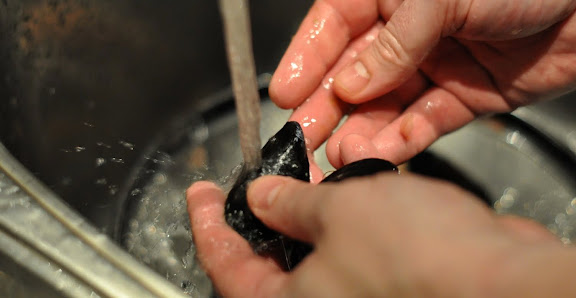 After removing the beards, rinse the mussels well in cold water.  Don’t use any of the mussels that have opened – they are dead (R.I.P.) 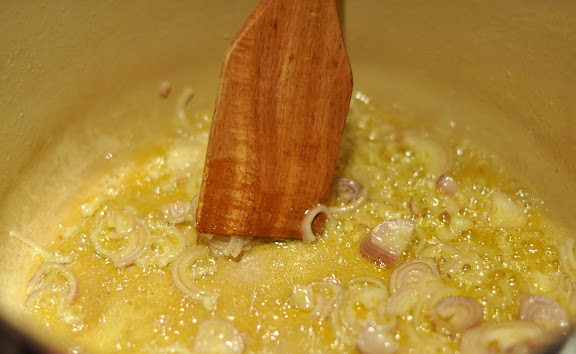 In the heated butter, saute the shallots with a generous pinch of salt for a few minutes. 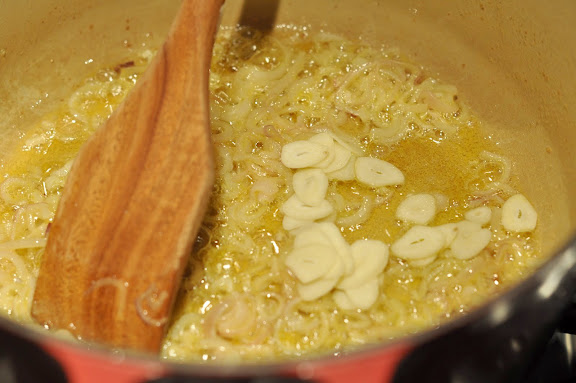 Add the garlic and saute for a few more minutes. 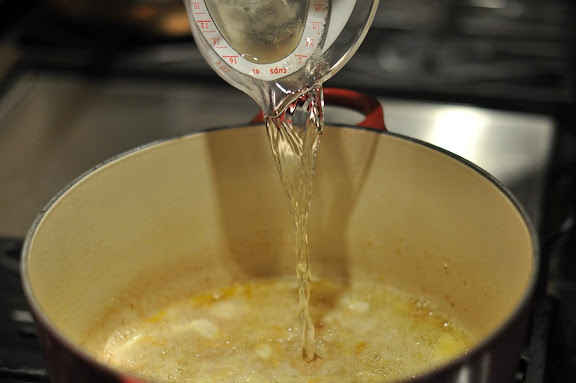 Add the champagne.  We actually used prosecco, but either one will work.  White wine would work too, but the bubbly stuff pairs really well with the finished mussels. 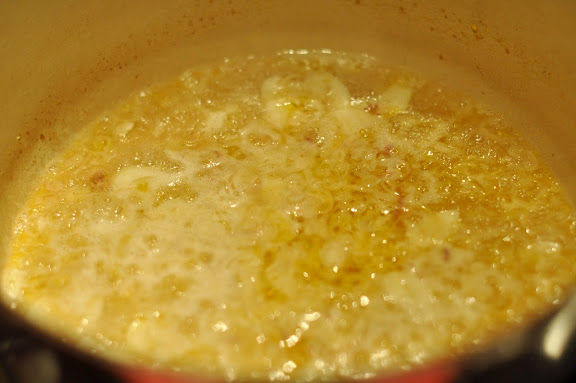 Bring the mixture to a boil. 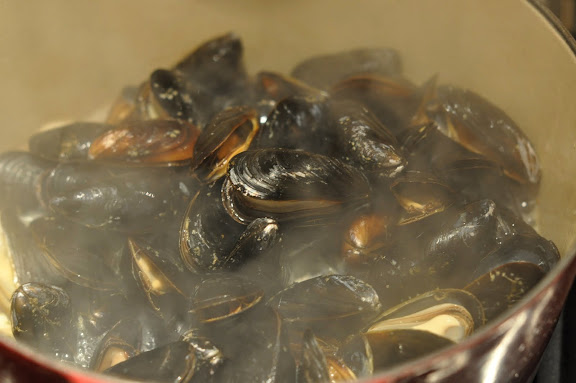 Add the mussels to the broth and cook (covered) over medium to medium-high heat for about 4-5 minutes. 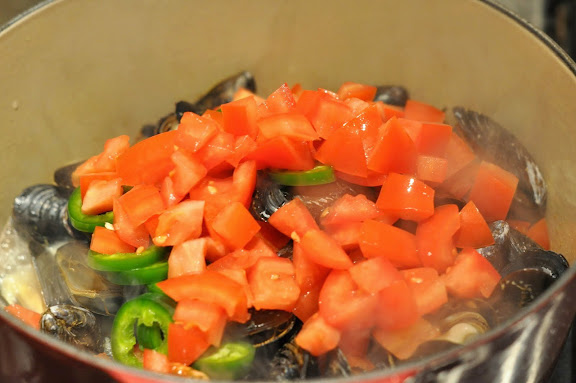 Add the tomatoes and jalepenos, then cook (covered) for 2-3 more minutes. 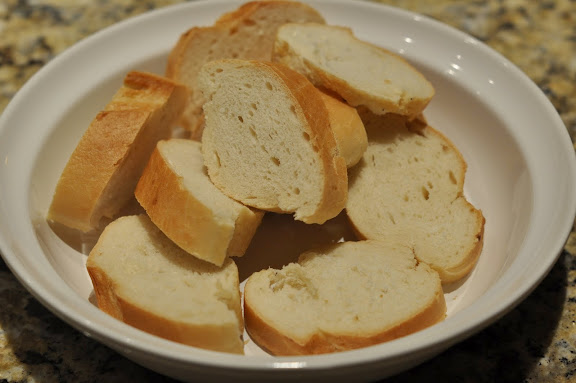 You’ll want to serve the mussels with some good bread for dipping in the delicious broth. 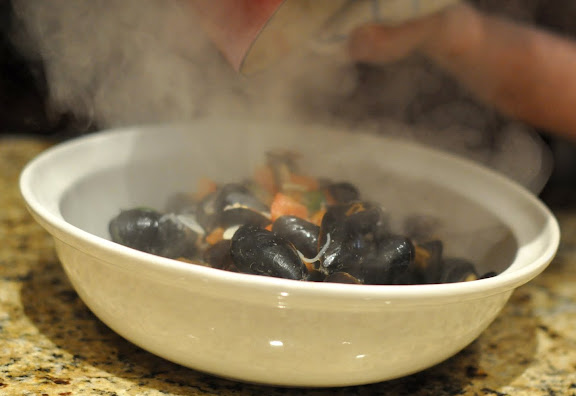 Carefully pour the mussels and broth into a big serving bowl. 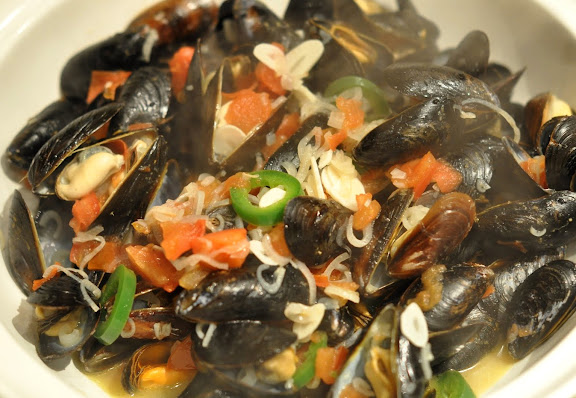 They taste as good as they look. 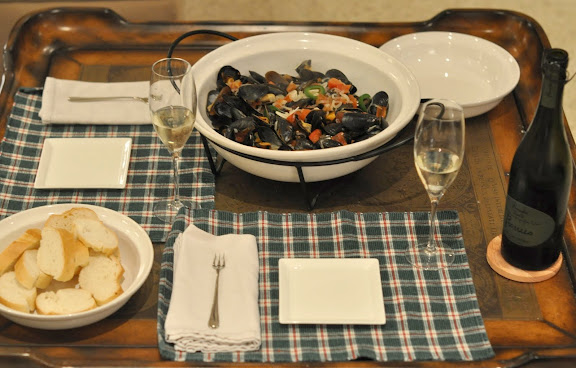 One of the best things about this dish is that you use some of the champagne (or prosecco) for the broth, then drink the remainder with the meal.  Champagne and mussels go remarkably well together. 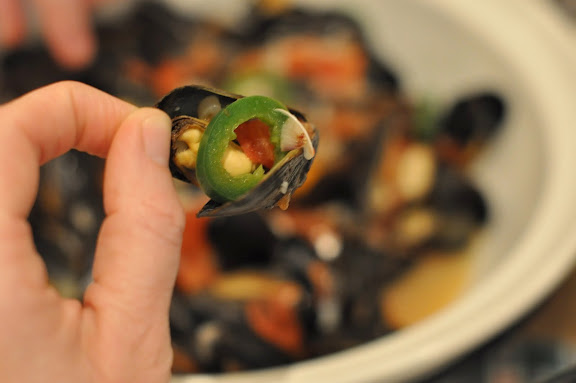 The tomatoes, jalepenos, shallots and garlic also go really well with the mussels.  Get a little bit of everything in each bite.  Then sop up some of the broth with the bread.  Then take a sip of champagne.  Rinse and repeat.

Directions:
Melt the butter over medium heat in a pot or Dutch oven.  Saute the shallots with a generous pinch of salt for approximately 2 minutes.  Add the garlic and continue to saute for approximately 3 more minutes.

Add the champagne and bring to a boil.  Then add the mussels, cover, and cook  over medium to medium-high heat for approximately 4 minutes.

Add the jalapeno, tomato and cilantro, then re-cover and cook approximately 3 more minutes.

Taste the broth and add salt if necessary.  Stir the ingredients together and pour into a large serving bowl.  Serve with some crusty bread.