We adapted this recipe from “Tequila-Marinated Ham Steaks” in Weber’s “Real Grilling” cookbook.  (As an aside, we use this book so often that it is falling apart – pages are literally falling out.  Obviously, we highly recommend it.)  This is a great weeknight recipe and a good alternative if you get tired of the usual chicken, pork or beef main dishes.  We’ve made this recipe with the tequila in the marinade and without, but haven’t really noticed a difference in the end result.  Since most of our tequila is usually consumed in margarita form, we typically leave it out of the marinade. 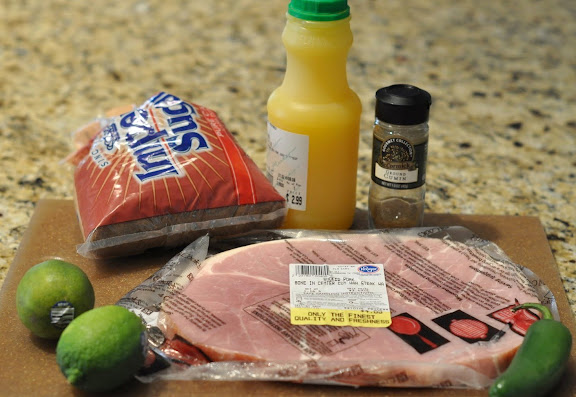 This recipe calls for marinating the ham 4-6 hours prior to cooking it.  The marinade ingredients are simple:  fresh lime juice, fresh orange juice, brown sugar, ground cumin and jalapeno.  (And tequila if you have/want it.) 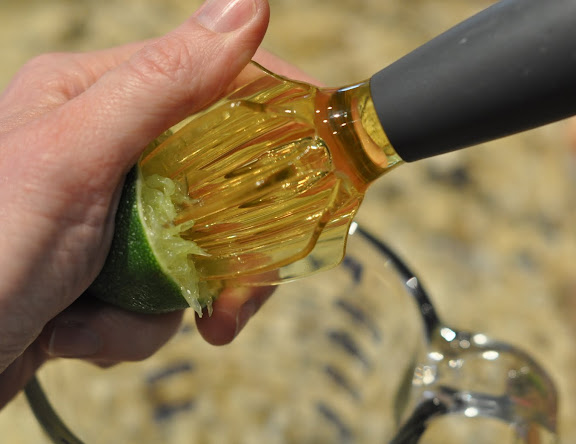 This is a handy tool for juicing limes, lemons, etc. 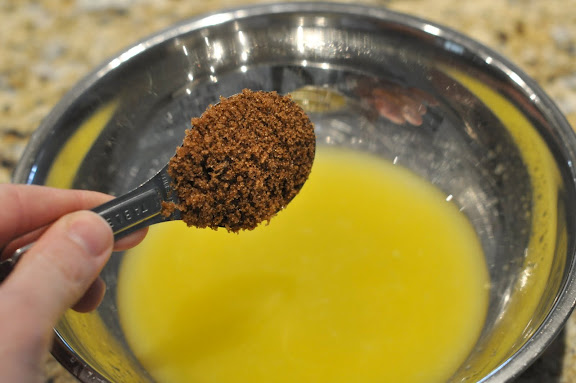 Add the brown sugar to the orange juice and lime juice.  We usually juice a fresh orange for this recipe (like we did with the lime), but we had fresh orange juice leftover from New Year’s so we used that instead. 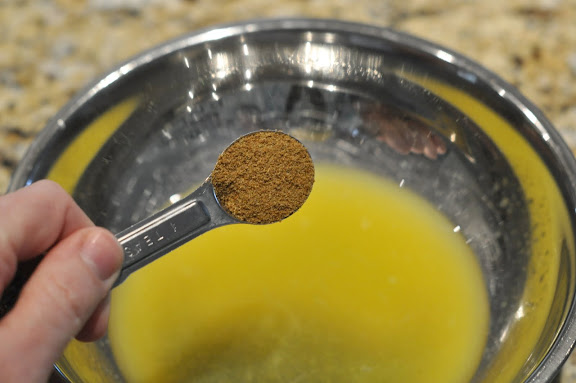 Then add the ground cumin. 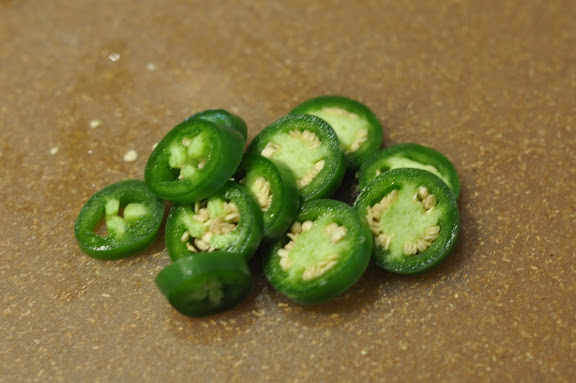 Cut up a jalapeno.  You don’t need to remove the seeds, since the spicy jalapeno flavor adds to the flavor profile of the marinade. 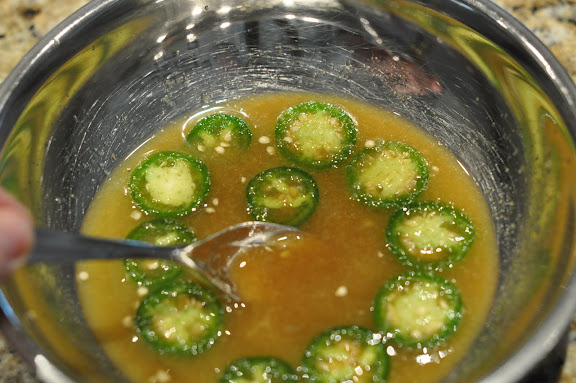 Add the jalapeno to the marinade and stir it all up until the brown sugar dissolves completely. 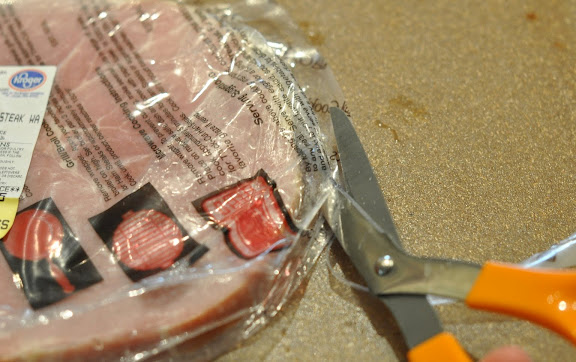 Dan has a trick for getting the rather unwieldy ham steak into the bag for marinating, without having the ham break apart. 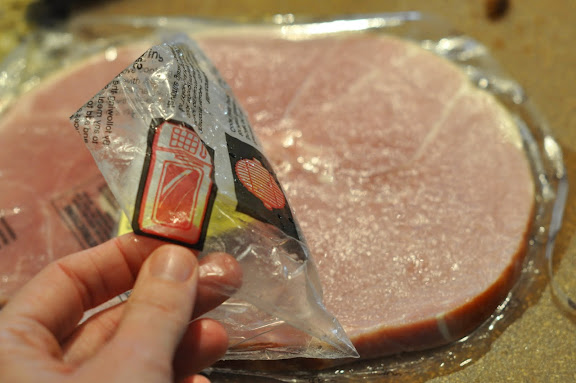 The key is to cut around 2/3 of the ham package to open it up so you can just slide the ham out of the package into the marinade bag. 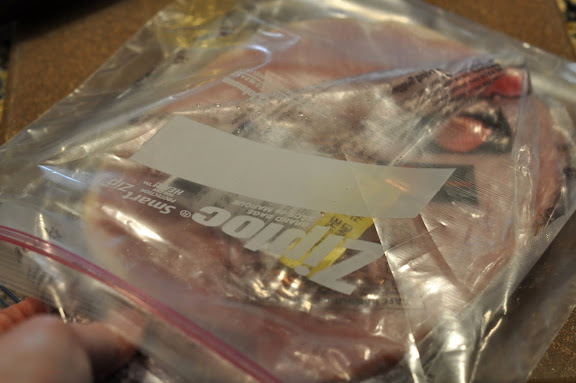 Put the whole steak (in its package) into the marinade bag. 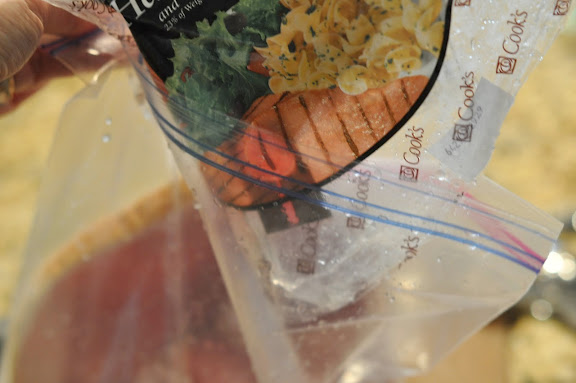 Then pull out the ham steak packaging. 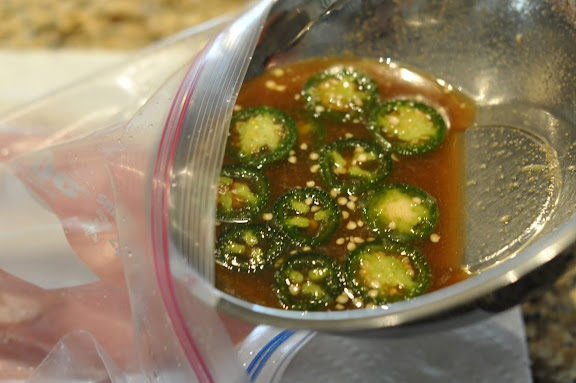 Add the marinade to the bag. 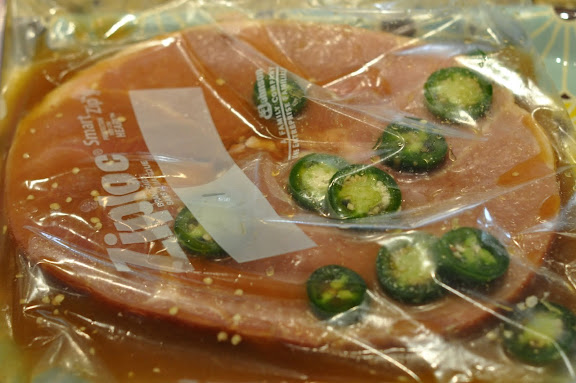 Make sure the ham is coated on all sides with the marinade, then refrigerate for 4-6 hours. 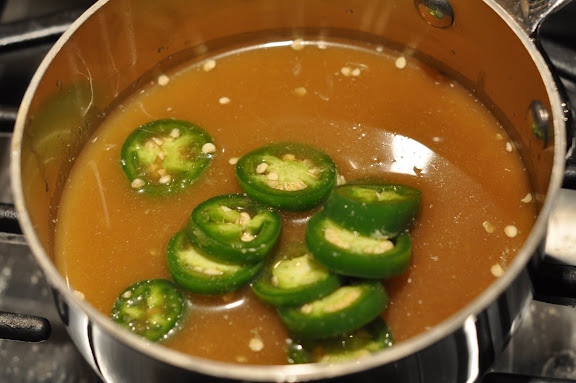 When it’s time to grill the ham, take it out of the marinade bag and set it aside on a tray or plate.  Pour the marinade into a small pan to heat up for basting the ham while it grills.  Bring the marinade to a boil, then cook it over medium-high heat for about 5 minutes. 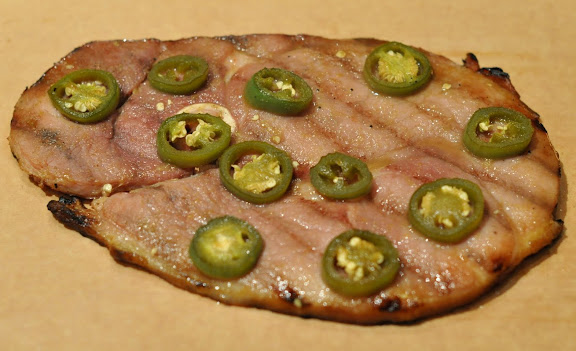 Grill the ham for approximately 6 minutes over direct medium heat, then turn it over and grill for another 6 minutes or so.  Baste with the leftover boiled marinade (and jalapenos) after turning. 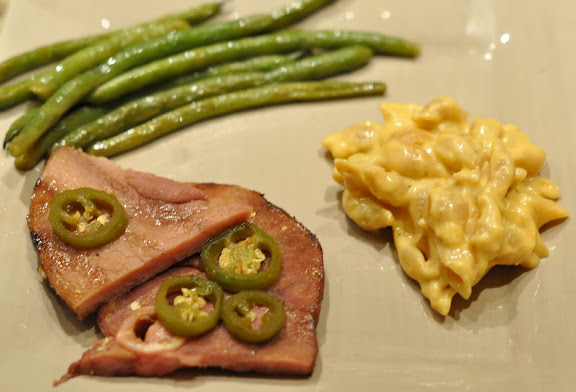 We served our grilled ham with macaroni and cheese (recipe and post coming soon!) and green beans.  Eating the jalapenos with the ham is optional – they are delicious but can be pretty spicy.

Directions:
To make the marinade, combine the tequila (if using), lime juice, orange juice, brown sugar, cumin and sliced jalapeno in a small bowl.  Stir the ingredients together until the sugar is dissolved.

Allow the ham to stand at room temperature for 20-30 minutes before grilling.  Remove the ham from the marinade and set aside on a tray or plate.  Pour the marinade and jalapenos into a small pan to heat up and baste the ham while it grills.  Bring the marinade to a boil and cook over medium-high heat for 5 minutes.

Grill the ham over direct medium heat for approximately 6 minutes, then turn.  After turning, baste the ham with the cooked marinade and jalapenos, then grill for another 6 minutes or so, until the ham is crispy on the edges.  Remove the ham steak from the grill, cut into serving-sized pieces and garnish with jalapenos.