Brining pork is a good way to take a lean (and more healthy) cut of meat and cook it such that it stays juicy and delicious.   Using beer in the brine adds a subtle layer of flavor — Dan says it’s a hoppy flavor, but his palate is way more sophisticated than mine.  Beer-brining is a good way to cook pork that you may want to use later in the week in a different dish.  It’s flavorful, without being tied to any particular flavor profile (e.g., Asian, BBQ, etc.) 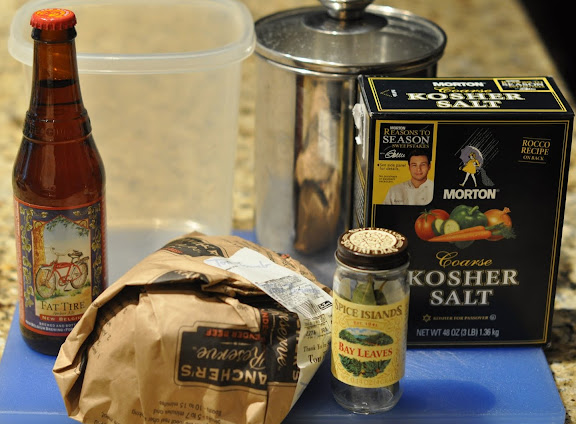 The ingredients for the brine:  1/3 cup salt, 1/4 cup sugar, 1 bay leaf, 1 beer (a darker beer like Guinness is best, but whatever you have on hand.  On this night, we used Fat Tire), water, ice, and of course, the pork. 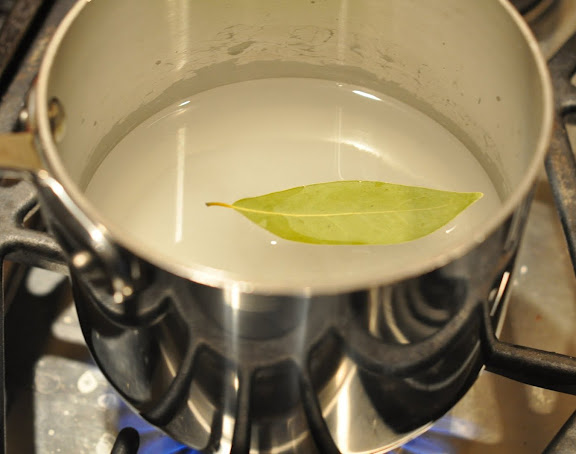 The easiest way to make the sugar and salt dissolve in the water (about 2 cups of water) is to boil all these ingredients (with the bay leaf) together for about 5 minutes. These giant pork chops have some extra fat that needs to be trimmed off with a sharp knife. Pork chops trimmed (with fat on the side). 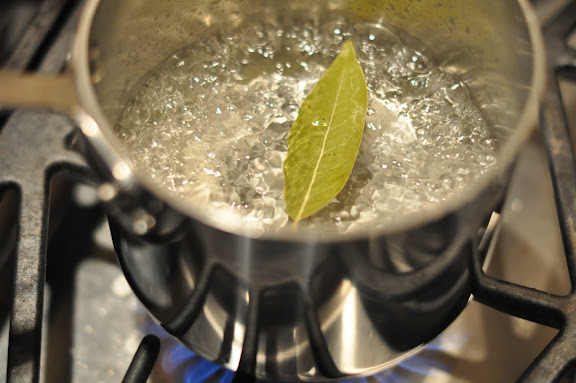 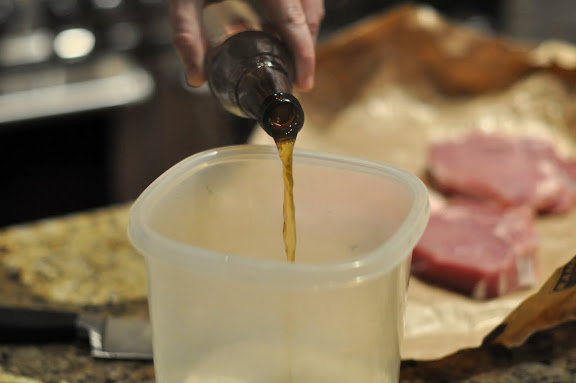 Add the water/salt/sugar mixture to a container large enough to also accommodate the pork chops, the beer, and lots of ice. 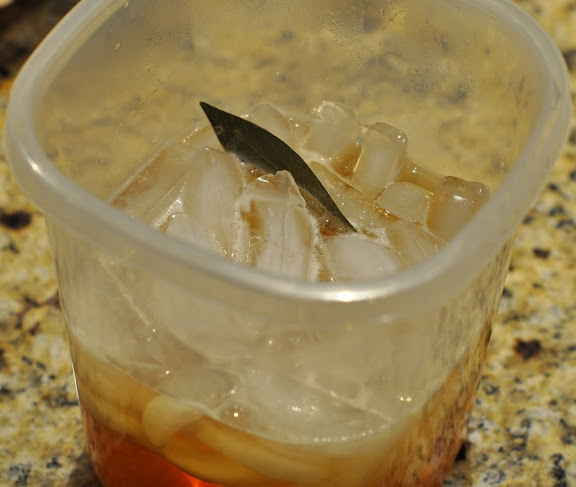 Add the ice to the brine before you add the pork, so that the pork doesn’t start cooking in the warm brine.  Otherwise, food poisoning would most likely put a damper on your week. 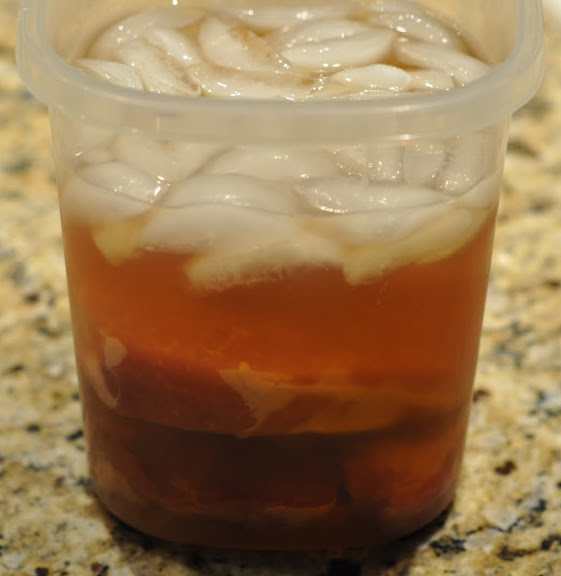 Once the brine is iced down, add the pork and put the container in the fridge.  The pork should brine in the fridge for about 6-8 hours. 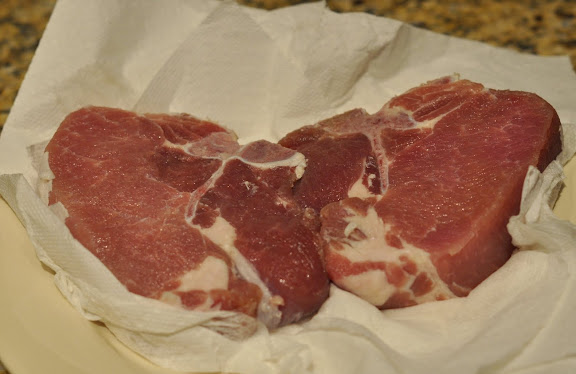 After you take the pork out of the brine, pat it dry with some paper towels. One of our favorite commenters (Hi Aunt Lynne!) recently said that she used some of our leftover quick red sauce as a makeshift sauce for pork, and we were inspired.  We picked up this “meat sauce” at our local Central Market a couple of weeks ago and decided to glaze the pork chops with it while they were grilling.  This sauce is mustard-based and really good.  Other steak sauces would probably also work well. As an additional layer of flavor, Dan made a quick spice rub to put on the pork chops before they went on the grill.  Rub ingredients are cayenne pepper, granulated garlic, hungarian paprika and salt. 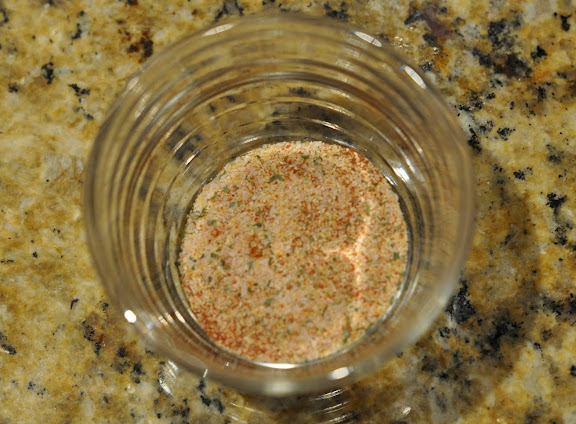 As we’ve said before, Dan doesn’t really like to measure, so just throw a bunch of those ingredients together – maybe a little more cayenne if you like spicy food; but definitely not too much salt, since the pork is already salty after being in the brine.  (Sorry if it’s too vague.  I really have tried to get Dan to measure stuff for purposes of recipes here, but he’ll be cooking, and I’ll be taking a TV break from taking photos (Real Housewives, anyone?), then next thing I know — the rub is already made.  The good news is that other than too much salt or spice, imprecise measurements with this rub are okay — you really can’t screw it up). 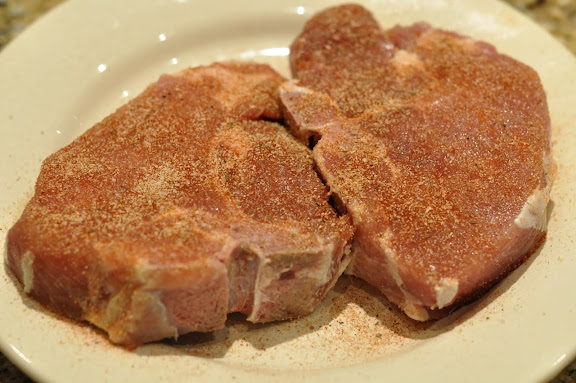 Pork chops on the grill.  (Still getting used to different lighting conditions for photos as Fall descends on Texas). 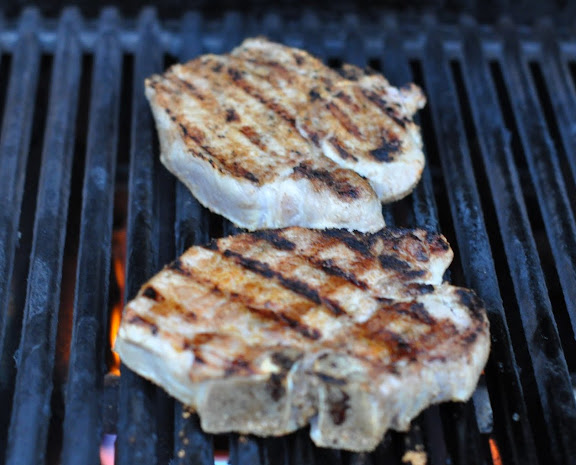 Depending on the thickness of the chop, flip the pork over after 4-6 minutes.  During those 4-6 minutes, you may want to rotate the chop 90 degrees (without flipping it over) if you want good grill marks (who doesn’t?) 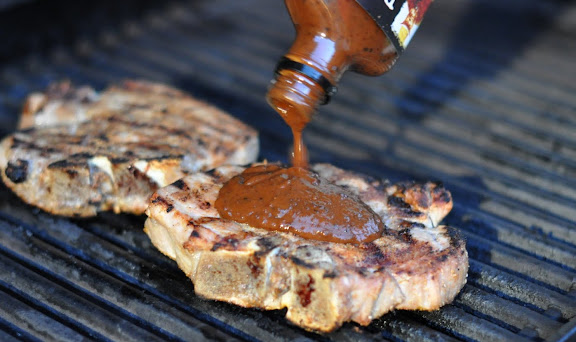 Adding the sauce  (and still working on the darker-than-usual photos). 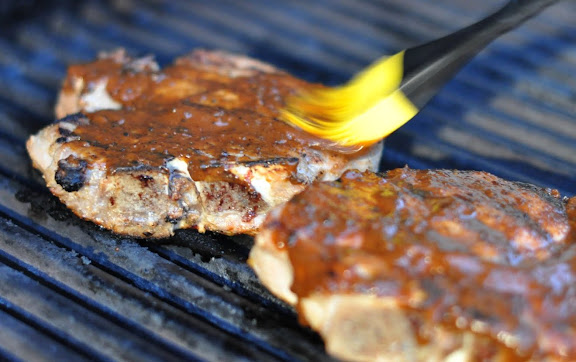 Dan is fast with the silicone sauce brush! 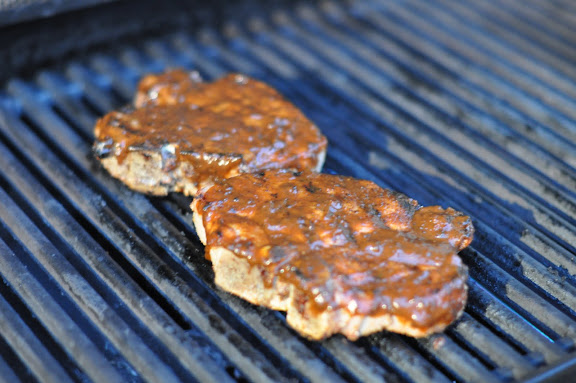 After applying the sauce, cook the chops over indirect medium heat for about 10 minutes. 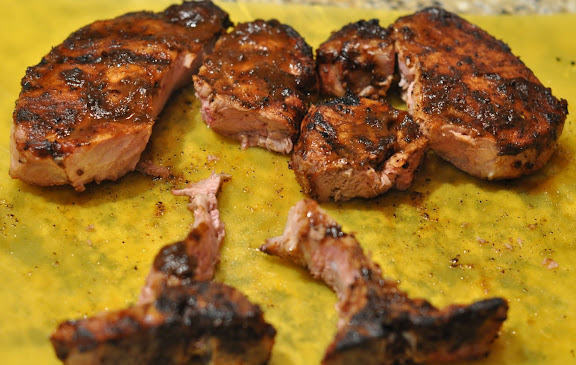 Because these were giant pork chops, Dan cut out the bones before plating them.  We try to practice portion control, so no need to place a huge Flintstone-style slab of pork on your plate for dinner.  Instead, I had one of the smaller filets and Dan had one of the strip sides.  We will use the leftovers for a meal later in the week (stay tuned!)