Actually, we should probably call this dish “chicken with 20 cloves of garlic,” since we used chicken thighs instead of a whole chicken and cut the recipe in half.  Either way, it’s a lot of garlic.  But don’t worry — you won’t need to make a dessert out of gum, breath mints and mouthwash after eating it — the garlic becomes sweet and much less pungent when you cook it for a long time.  Although it takes time to make (browning time for the chicken and the garlic, then about 30 minutes simmer time for both, plus several minutes to finish the creamy sauce), this dish is well worth the effort.  The sweet garlic adds flavor to both the chicken and the rich sauce, which elevates this dish to the level of dinner party fare.  And it provides a built-in party trick when your guests are shocked by how much garlic they’re eating, without any overwhelming garlicky flavor (or post-dinner garlic breath.) 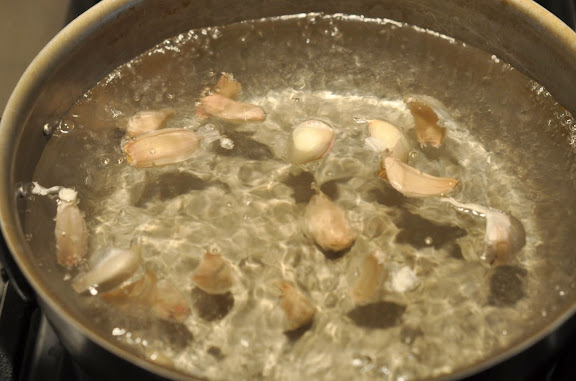 The original recipe calls for 3 whole heads of garlic, which should end up being about 40 cloves.  We used about a head and half, which ended up being 20 cloves.  I know because I counted them.  (Of course I did.)  The easiest way to peel that much garlic is to boil it first.  Bring the water to a boil, then drop in the individual cloves and boil for 60 seconds. 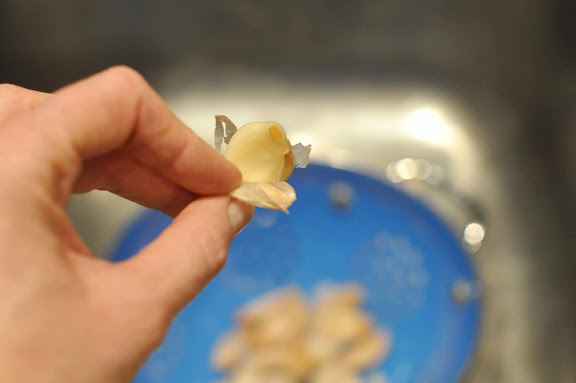 Drain the garlic and let the cloves cool a bit, then peel.  The outer skin comes off much easier than it would otherwise. 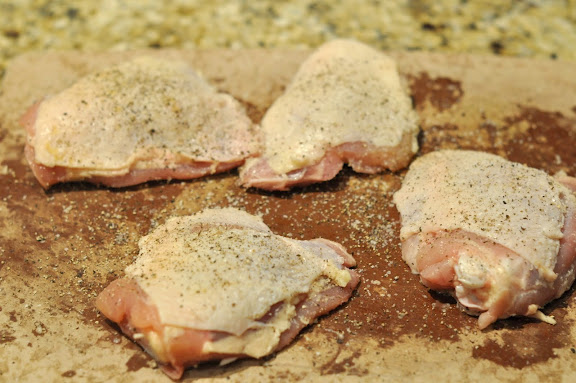 The original recipe uses 2 small chickens (3 1/2 pounds each), cut into eighths.  That’s a lot of chicken (and a lot of cutting up of chicken), so we used about 2 pounds worth of chicken thighs instead.  Pat the chicken dry with paper towels and season both sides with salt & pepper. 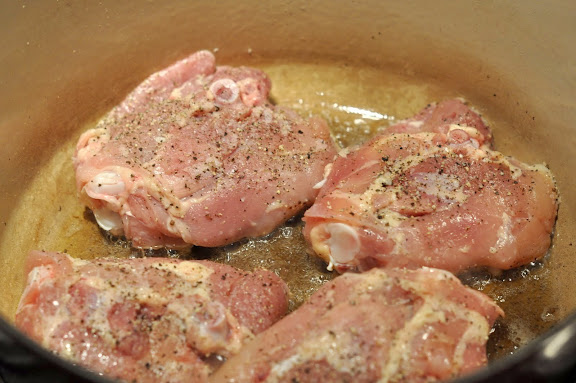 Heat about half a tablespoon of butter and a tablespoon of olive oil in a large pot or Dutch oven over medium-high heat.  Add the chicken, skin-side down first, to the pot and cook until browned on both sides — about 5 minutes per side.  Transfer the chicken to a plate and set aside.  If you’re browning a whole chicken, work in batches to avoid over-crowding the pot. 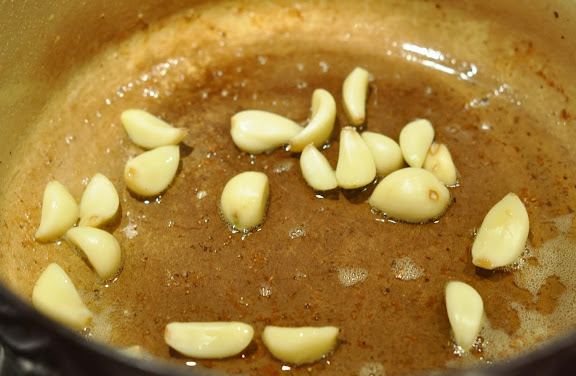 Lower the heat to medium, add the garlic to the pot and saute, turning often, until the garlic is lightly browned — about 5-10 minutes. 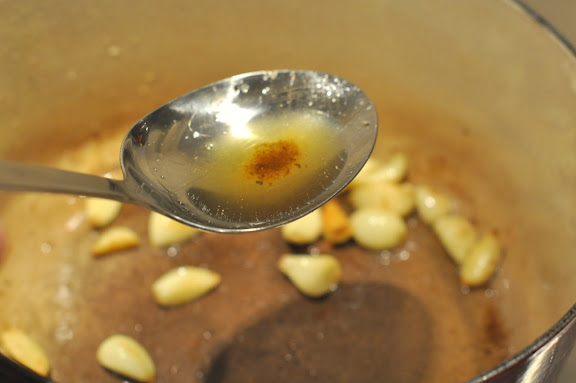 We thought there was a little too much oil/rendered fat in the pot, so we spooned some of it off into a small bowl (to cool and then discard.) 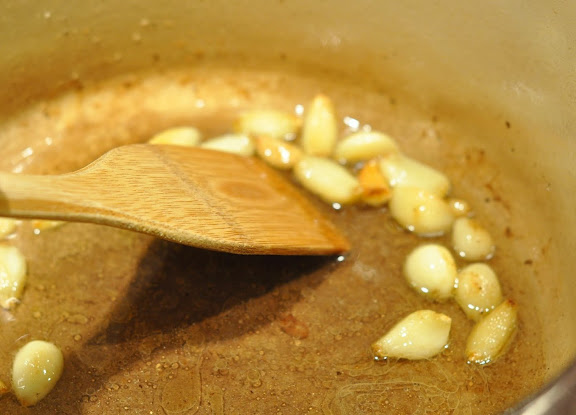 Add a tablespoon of Cognac and 3/4 cup white wine to the pot, turn up the heat and scrape up any brown bits from the bottom of the pot. 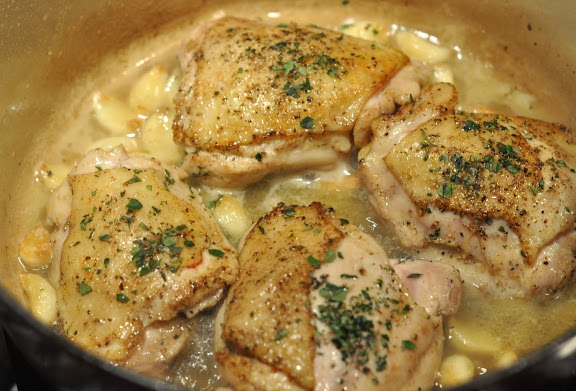 Return the chicken to the pot (along with any accumulated juices from the plate) and sprinkle the chopped fresh thyme leaves over the chicken.  Cover the pot, turn the heat down to low and simmer until the garlic is very tender and the chicken is cooked through — about 30 minutes. 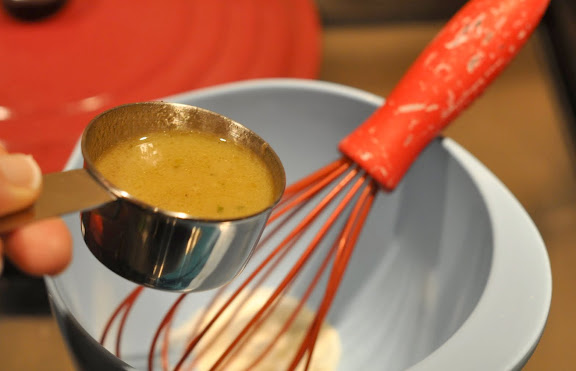 When the chicken is done, remove it to a plate and tent with foil to keep it warm.  Take about 1/3 cup of the sauce out of the pot and whisk it together with about a tablespoon of flour.  Stir the flour mixture back into the sauce in the pot. 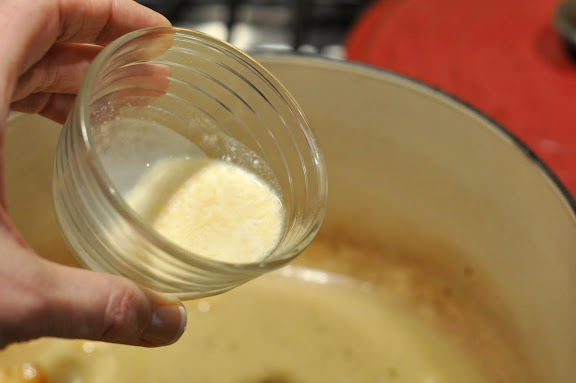 Add a couple teaspoons Cognac and a tablespoon of heavy cream to the sauce and cook over medium-high heat until the sauce thickens — about 3 minutes.  Taste the sauce and season with salt & pepper. 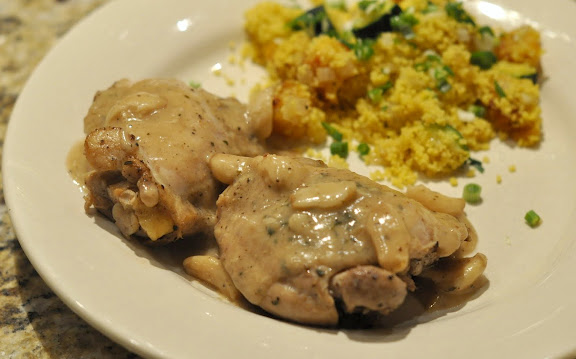 Serve the chicken with lots of sauce and garlic spooned over the top.  Resist the temptation to ignore the chicken completely and spread the butter-soft roasted garlic on crusty bread dipped in the sauce as your “entree” instead.