Wearing their “throw-back” jerseys, the Steelers played the Washington Redskins this week.  Despite looking a bit like bumble bees dressed in prison inmate costumes (or maybe because of it), the Steelers made a strong showing and won with ease.  Finding a culinary specialty from the D.C. area for the Steeler Opponent-City Challenge was not quite as easy.  Our nation’s capital may be known for partisan politics, cherry blossoms and American monuments and memorials, but the district doesn’t seem to be famous for any particular food item or cuisine.  After considering (and rejecting) an Obama vs. Romney favorite-food-face-off and briefly entertaining the culinary possibilities for donkey or elephant (not really), we settled on a D.C. “carryout” specialty — wings and “mumbo” sauce.  According to our sources, D.C. has an abundance of Chinese carryout restaurants, and a staple of those eateries is a tangy, sweet sauce with a bit of spice that is typically served with fried chicken wings.  A lot of our research described mumbo sauce as a cross between BBQ sauce and Chinese sweet & sour sauce, which didn’t really sound all that appealing at first.  But we persevered and the mumbo sauce beat our expectations, much like the Steelers beat the heck out of the Redskins (unfortunate jerseys and all.) 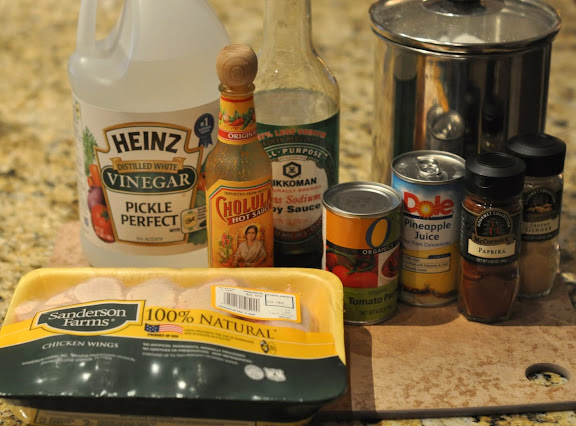 We adapted a recipe found here for the mumbo sauce, with a simple (if rather unusual) combination of ingredients:  tomato paste, white vinegar, pineapple juice, sugar, soy, ground ginger, paprika and hot sauce.  Although the wings from most D.C. carryout places are likely fried in oil, we decided to follow this recipe’s technique of baking the wings on a rack in the oven for a more healthy version. 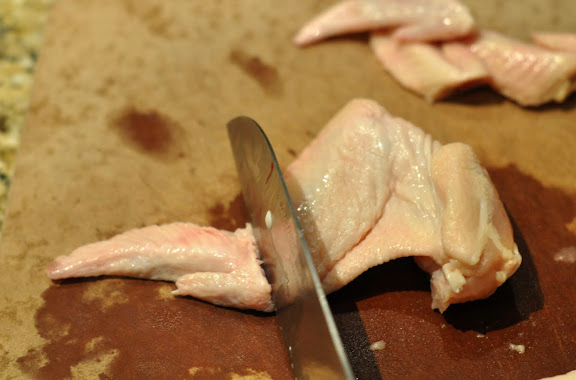 Preparing the wings is my least favorite part of the process.  Use a big, sharp knife to cut off (and discard or save for stock) the wing tips… 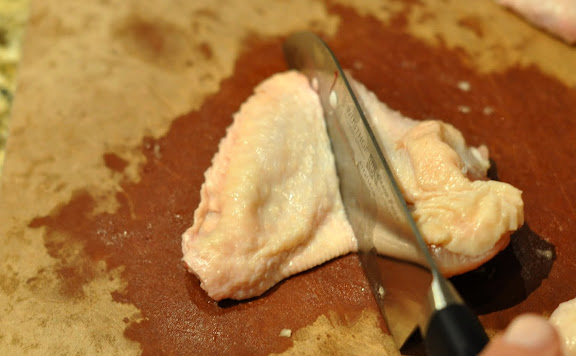 …then cut apart the drumettes and the flat part of each wing.  Sounds easy, but it takes a little practice to find the right place to cut between the joints.  Or at least it took me a little while (and 1 or 2 rather mutilated wings.) 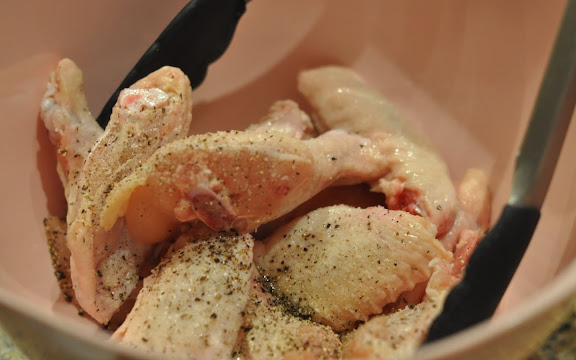 Toss the wings with about a tablespoon of vegetable or canola oil and some salt and pepper. 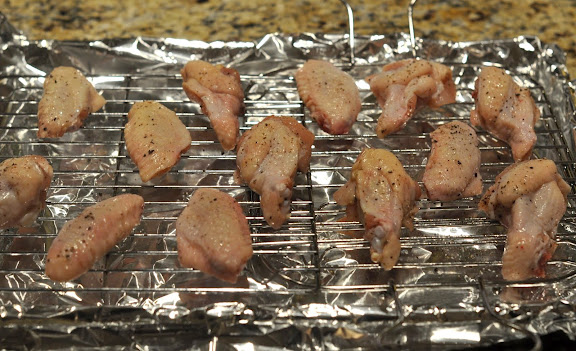 Lay the wings out in a single layer on a wire rack set on top of a rimmed cookie sheet lined with foil.  Bake the wings in the oven preheated to 400 degrees until they are cooked through and the skin gets lightly browned and crispy — about 45-50 minutes.  No need to flip the wings over halfway through — cooking them on the rack allows the heat to circulate all around and cook the wings evenly. 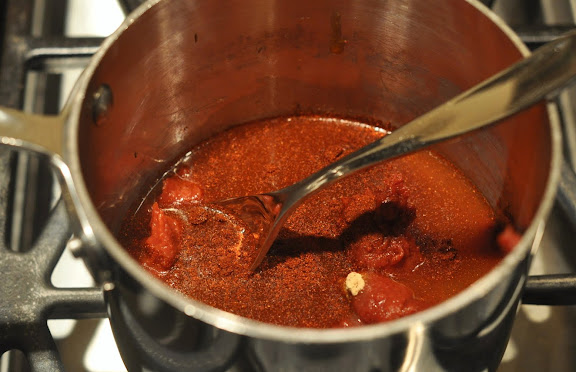 While the wings cook, prepare the mumbo sauce:  combine the tomato paste, white vinegar, pineapple juice, sugar, soy, ground ginger, hot sauce and paprika in a small saucepan, bring to a simmer and cook until the sauce thickens — about 20-30 minutes.  We initially thought the pineapple juice was an odd ingredient and almost left it out, but it added a nice, slightly Caribbean flavor and made the sauce more complex overall.  After it thickens, taste the sauce and adjust the seasonings to your liking.  We prefer ours with a bit more kick and ended up adding more hot sauce and touch more paprika.  If you like yours sweeter, add a little more sugar.  For more salt, add soy.  More tang?  Add a little more vinegar.  You get the idea. 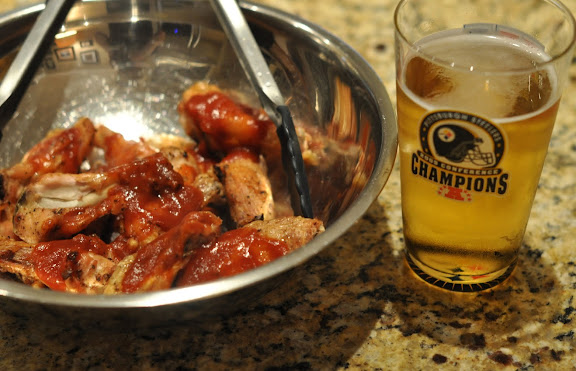 Toss the wings with the sauce in a large bowl until well coated. 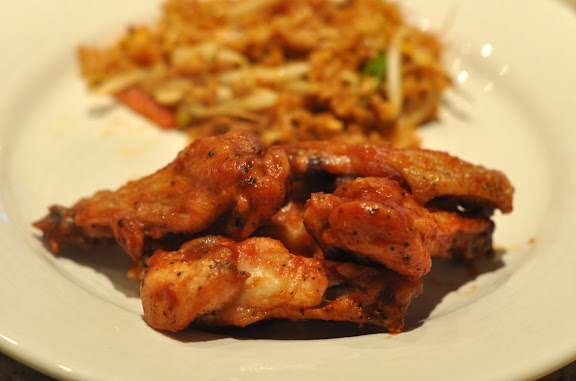 Channeling the spirit of a D.C. Chinese carryout joint, we served the wings with fried rice (this recipe, minus the pork) and loved how well the flavors and textures complemented each other.  Neither one of us is a fan of the sweet & sour sauce typically served in a lot of Chinese restaurants, but mumbo sauce is deliciously different:  sweet, but not too sweet, rounded out with just the right amount of tang and spice.  Both the sauce and the technique of baking the wings are successes that we would do again, bringing the current S.O.C.C. record to:  Steelers 4-3, Foodie Lawyer 6-1.