Something about “refrigerator pickles” says “summer” to us.  Maybe it’s the name — “refrigerator” makes one think of grabbing a cool, crisp snack out of the fridge on a hot day.  Or perhaps it’s because pickles go so well with summertime foods like hot dogs and hamburgers, consumed at backyard barbeques and gatherings. Could be because cucumbers are in season this time of year (our cucumber plants WERE at least, until they succumbed to the heat.) Whatever the reason, we’ve already made several batches of refrigerator pickles this summer, and they could not be easier or more delicious. All you need are cucumbers (small, pickling cucumbers work best), garlic, peppercorns, dill, white vinegar, water, salt and sugar. And patience to wait about 4 days for the ingredients to pickle. 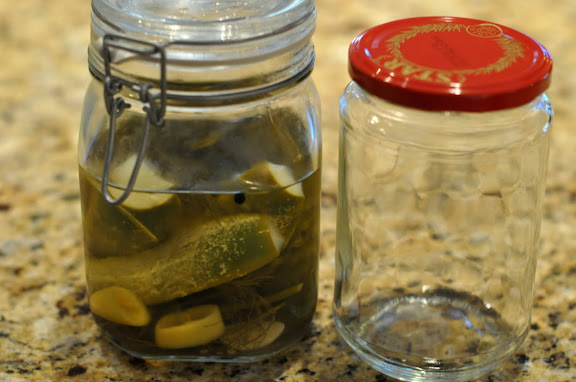 One of the best things about this recipe is that there is no canning required.  The pickles won’t last as long as pickles that have been canned, but they last about a month (or so we’ve read — we usually eat up each batch within a couple of weeks.)  Since you’re not canning the pickles, you can use any type of sealable glass container.  We like the hermetic glass storage jars, but have also re-used other glass containers (the above jar previously held olives.)  The jar just needs to be big enough to hold however many pickles you’re making, and have a lid. 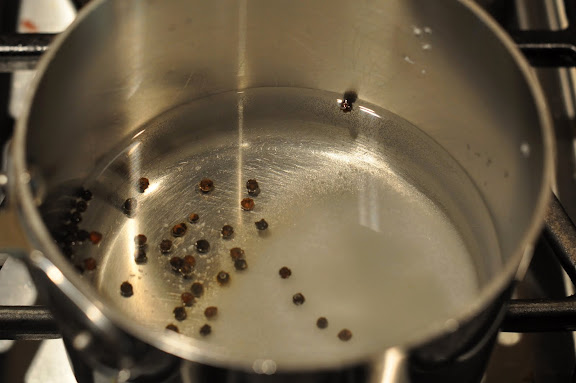 For someone with a food blog, Dan is surprisingly adverse to measuring and writing out recipes.  He’s more a fan of ratios.  I’m interested in neither ratios nor any sort of math, and can’t cook much more than a peanut butter & jelly sandwich without following a recipe, so I made him write up the quantities for the pickling liquid from our most recent batch.  Combine 1 1/2 cups distilled white vinegar, 1 cup water, 1/2 teaspoon black peppercorns, 4 teaspoons salt and 2 tablespoons sugar in a small pan and heat to a boil, stirring until the salt and sugar dissolve completely.

For larger quantities (and fellow fans of ratios), check out Dan’s handy little chart at the end of this post. 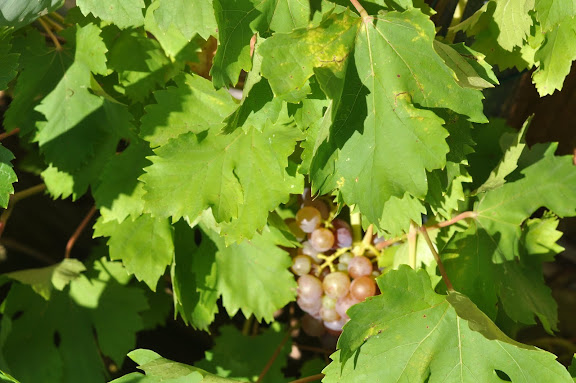 When researching pickle recipes, Dan found one that recommends adding a couple of grape leaves to the mix, because there is an enzyme in the leaves that will help make a more crunchy pickle.  We just so happen to have a small grapevine in our garden, so we decided to give it a try. (Looking at this photo makes me sad — shortly after this was taken, something ate every last one of our grapes, before they were ripe enough for us to try.  We suspect it was a raccoon, since the stems were still intact but every bit of fruit was gone.  Sad face.) 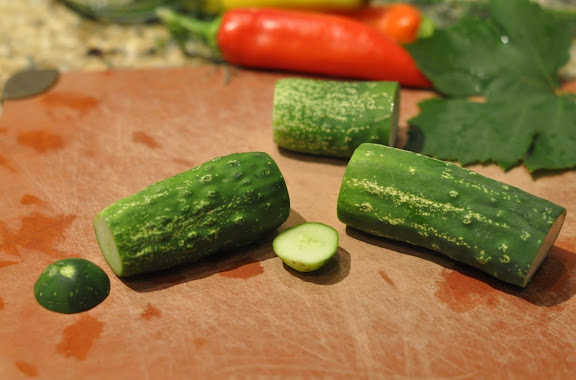 Cut off about 1/4 inch from each end of the cucumbers.  Then cut the cucumbers into round slices or spears, depending on your preference. 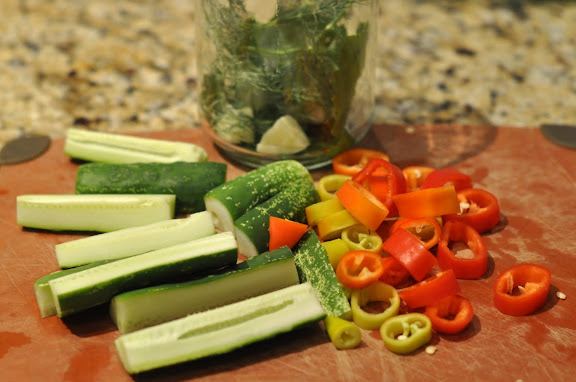 In addition to growing grape leaves (without the grapes) and cucumbers, we’ve also had a healthy crop of several different kinds of peppers this season — banana peppers, jalapenos, and serrano peppers.  We picked a few and added them to the cucumbers.  We de-seeded the peppers (to temper their heat a bit) and cut them into rings.  You could also leave the peppers whole, but be sure to use a toothpick or thin skewer to poke a few holes in the whole peppers so the pickling liquid can work its way inside.  Same goes for any other veggies you may want to add to the pickle jar (we added a couple of okra pods to a recent batch) — either cut them up, or poke a few holes in them so they’ll get pickled.  (There’s an alcohol-related joke in there somewhere, but I’m too  lazy to think of it.) 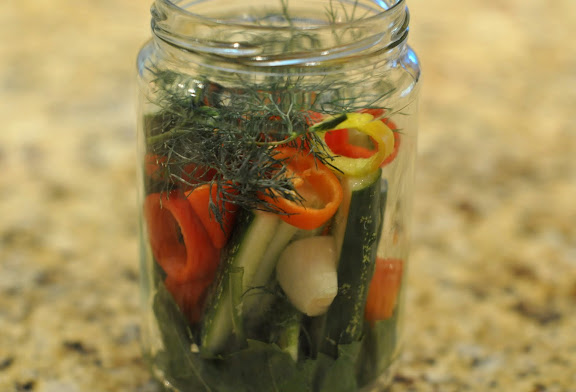 Place the grape leaves (if using) and a generous pinch of fresh dill at the bottom of the jar.  If you don’t have fresh dill, you could use dried dill — just use less of it.  Next, pack in the cucumbers and peppers (if using), another generous pinch of fresh dill and 2 cloves of peeled garlic.  Other recipes call for additional spices, such as coriander seeds, celery seeds, red pepper flakes and/or mustard seeds.  But we like our pickles pretty simple, with just dill, garlic and vinegar flavors.  Feel free to spice up (or down) your own pickles however you like.  The key to making pickles — and the combination that results in the actual pickling — is the vinegar/water/salt/sugar mixture. 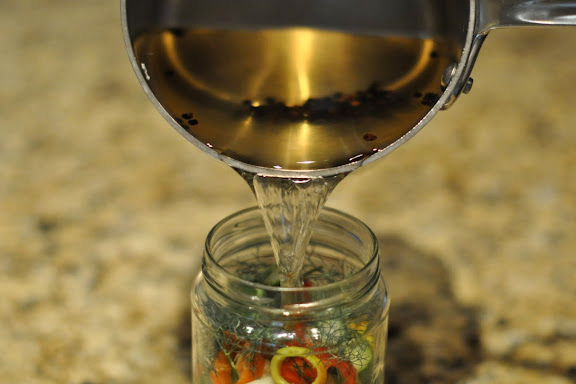 Pour the vinegar mixture into the jar, put the lid on the jar and let it sit out at room temperature for a couple of hours. 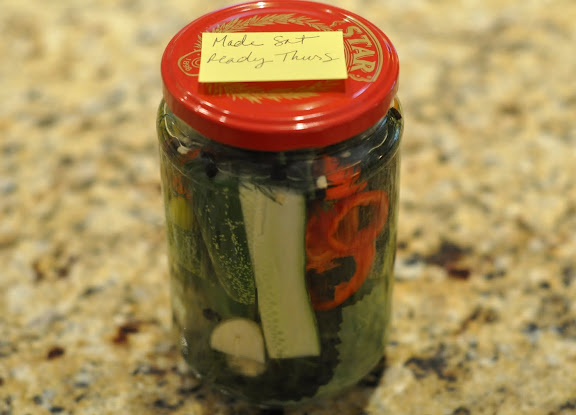 Then place the jar in the refrigerator, and 4 days later, enjoy your pickles!  And your summer!