Here’s a soup would be perfect for your next dinner party, or any occasion when you want to impress someone with an elegantly savory dish.  As exquisite as this soup tastes, it is remarkably easy to prepare with just a few ingredients:  butter, garlic, red onion, flour, a jar of roasted red peppers, a chipotle chile, fresh thyme, chicken broth, heavy cream and white bread for homemade croutons.  Given the simplicity of the ingredients and the fact that the recipe comes from a book of “quick-from-scratch” meals prepared in less than 60 minutes, we were shocked by the complex, layered and delicious flavors.  This is restaurant-quality soup:  something you might expect from a quaint, yet still fancy, little French bistro.  In France. 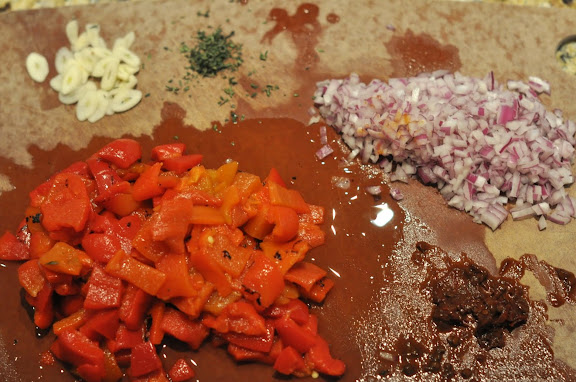 Start by preparing the veggies:  slice 2-4 cloves of peeled garlic into thin slivers; mince 1/2 teaspoon worth of fresh thyme; finely chop 1 small red onion; roughly chop 1 (16 ounce) jar of roasted red peppers; and finely chop about 1/2 of a chipotle chile in adobo.  A note about chipotle chilies — in case you’ve never used them — they typically come in cans in the Hispanic foods section of the grocery store.  Most recipes only call for 1 or 2 chilies at a time, since they are very, very spicy.  We usually just use what we need for the recipe we are cooking at the time, then put the rest of the chilies and their adobo sauce in a little tupperware container and store them in the fridge for the next recipe.  Since the chipotle is a smoke-dried jalapeno, it’s preserved and lasts a really long time. 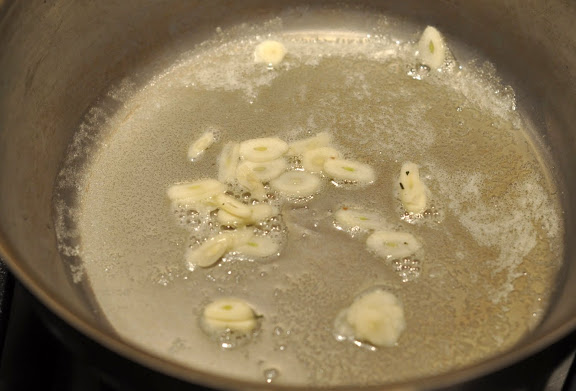 Heat 2 tablespoons of butter in a large sauce pan or Dutch oven over medium-high heat until melted.  Add the garlic slivers and cook until very lightly browned — 1-2 minutes.  Keep a close eye on the garlic and stir it frequently so that it doesn’t brown too much and become bitter. 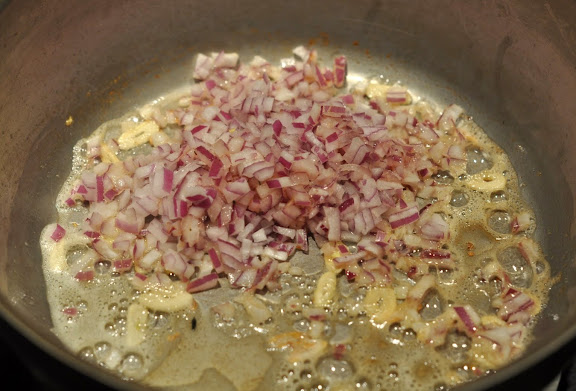 Add the onion and a generous pinch of salt and cook until the onion softens and begins to brown — about 4-5 minutes. 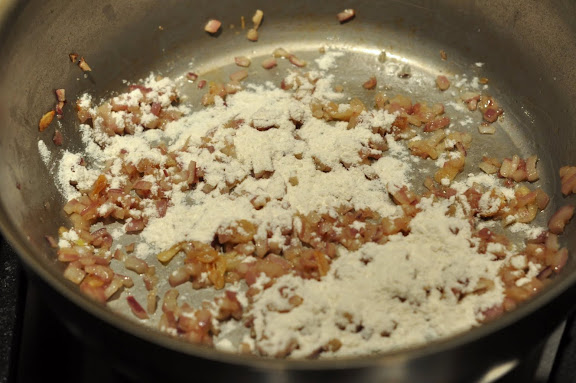 Add the flour and stir constantly until the flour mixture is lightly toasted — about 45 seconds. 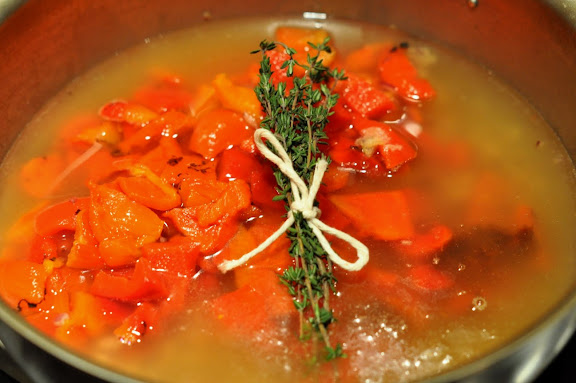 Add the red peppers, chipotle, 3 1/2 cups chicken broth, 1 cup water and a bundle of about 5 sprigs of fresh thyme tied together with kitchen twine and bring the soup to a boil.  Reduce the heat to a simmer and cook, partially covered, until the peppers are soft — about 20-30 minutes. 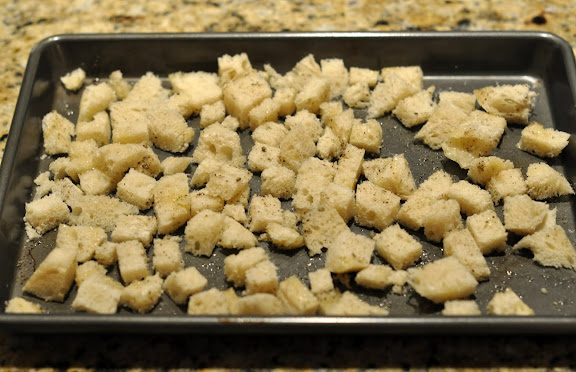 Prepare the croutons while the soup cooks.  Cut the bread into cubes, then toss the cubes with salt and pepper, drizzle with 2 tablespoons melted butter and spread the seasoned bread cubes in a single layer on a baking sheet.  Bake the croutons in the oven preheated to 400 degrees, turning once halfway through, until golden brown and crisp — about 8-10 minutes. 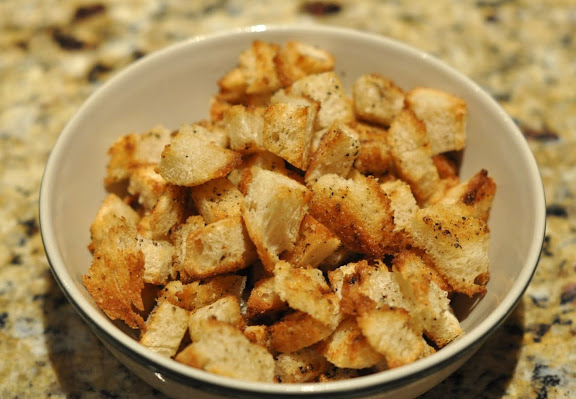 Sure, you could use store-bought croutons.  But you’re already saving time by not having to roast your own red peppers, so why not make the extra (minimal) effort to create these buttery, lightly crunchy toppings that take this soup to the next level of flavor country?  Seriously, why not? 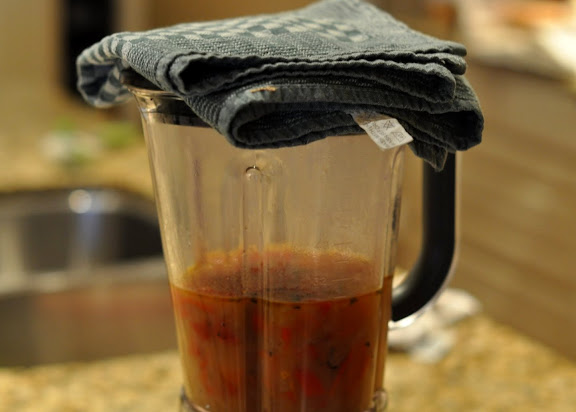 Once the peppers are soft, remove the thyme bundle, pour the soup into a blender and puree until smooth and creamy.  And now for the Science Portion of this post — blending hot liquids can be dangerous because the hot liquid expands when it is blended.  To blend safely, work in batches to avoid over-filling the blender (don’t fill it more than halfway each time) and always keep a kitchen towel or pot holder over the top of the blender (between the top and your hand holding down the top.)  Thus concludes the Science Portion.  (Perhaps we should just call this the “safety-without-any-explanation-of-science” portion.  Or the “too-lazy-to-research-science” portion.) 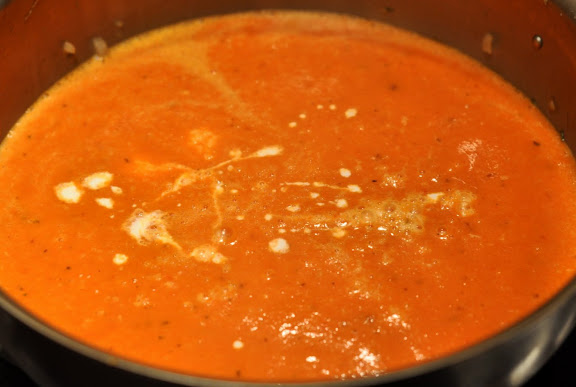 Pour the soup back into the pot or Dutch oven, stir in 3/4 cup of heavy cream, taste and add salt & pepper as needed, then simmer the soup over medium heat for 3-5 minutes. 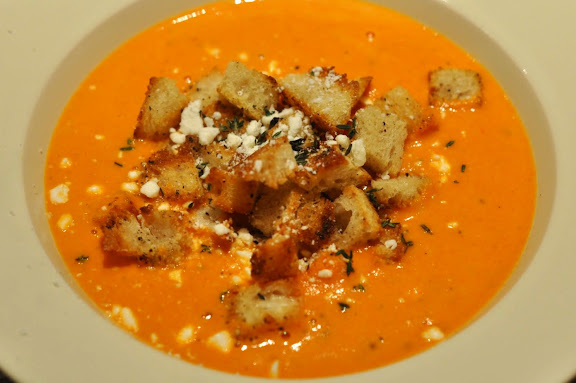 Topped with a generous amount of croutons, a sprinkle of chopped thyme and some crumbled feta cheese, this soup was just rich and hearty enough to make a nice meal for the two of us.  Smaller portions would be an amazing first course at a dinner party, but good luck coming up with additional courses  — this soup is one tough act to follow.