“Hyperbole” is defined as “obvious and intentional exaggeration; an extravagant statement or figure of speech not intended to be taken literally.”  As self-proclaimed foodies, we tend to enthusiastically gush about favorite foods, recipes and meals (no, really, we do.)  And we have MANY favorites.  Possibly so many favorites as to cheapen the meaning of the word “favorite.”  But, all enthusiasm aside, it takes quite a lot for us to decree a particular recipe or meal to be The Best — a title we generally reserve for a recipe or dish that absolutely transcends all other versions we’ve ever tried.  Friends, we are happy to present — without even a hint of hyperbole — The Best Chicken Parmesan you will ever eat.  Period.  The End. 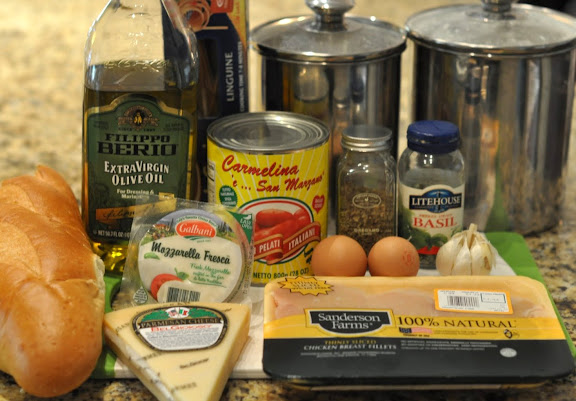 Being The Best doesn’t always come easy.  But the extra steps involved in this recipe from Cook’s Illustrated’s book “Italian Classics” are worthwhile when the finished dish tastes as good as this one does.  Despite the multi-step process, the recipe ingredients are pretty simple:   boneless, skinless chicken breasts; salt and sugar (for the chicken brine); a chunk of good-quality bread, Parmesan cheese, flour and eggs (for the breading); olive oil; mozzarella and Parmesan cheeses (to top the chicken); and garlic, olive oil, tomatoes, basil, oregano, sugar and salt & pepper (for the sauce). 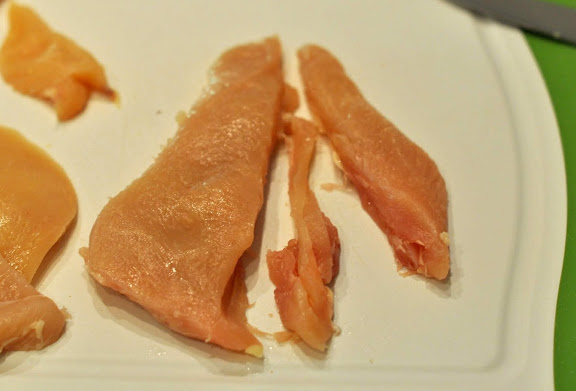 Prepare the chicken breasts by trimming the chicken of any visible fat and cutting out (and discarding) the tough tendon between the breast and tenderloin.  The recipe calls for reserving the tenderloins for another use, but we went ahead and made chicken parmesan out of them along with the breast pieces.  (Anyone else refer to it as “chickie-chickie-parm-parm” after seeing this?  We weren’t worried about using the tenderloins and ending up with too much chicken, since we knew we could make chickie-chickie-parm-parm sammies with the leftovers.) 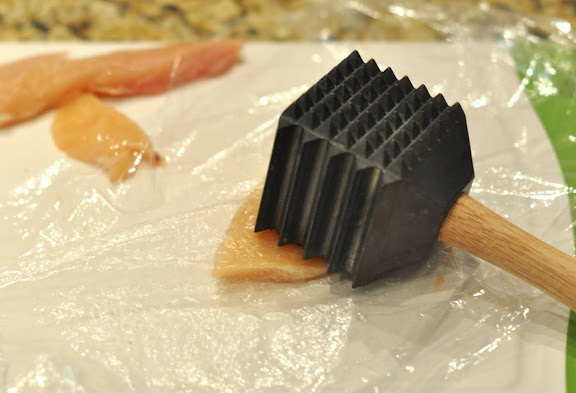 Next, pound the chicken to an even thickness of about 1/2 inch.  Placing a piece of saran wrap over the chicken on the cutting board helps to contain any flying meat bits (and prevents you from having to sanitize your entire kitchen after you’re done.) 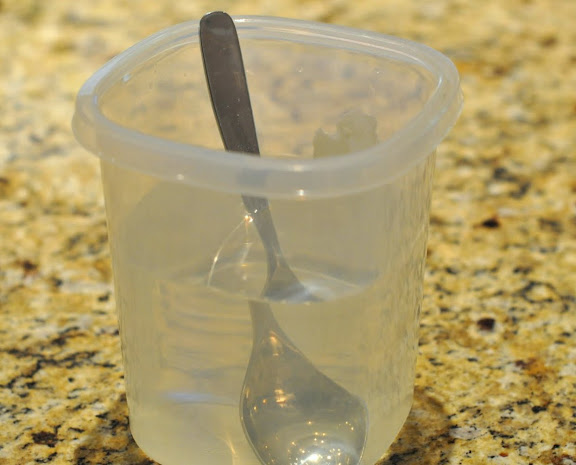 Make the brine for the chicken by stirring 1/2 cup kosher salt and 1/2 cup sugar into 4 cups of cold water until the salt and sugar dissolve completely. 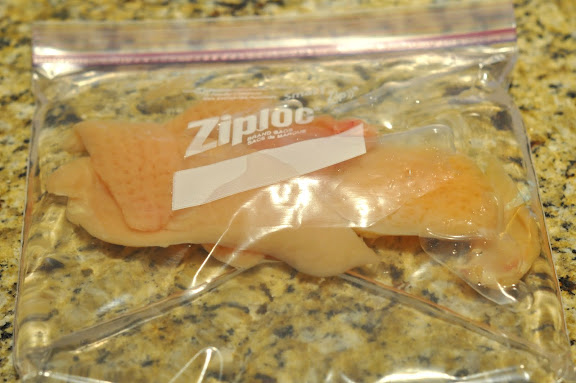 Pour the brine into a resealable bag, add the chicken and refrigerate for 30 minutes.  Brining the chicken might seem like an unnecessary extra step, but it helps to season the chicken and keep it juicy — the first step toward becoming The Best. 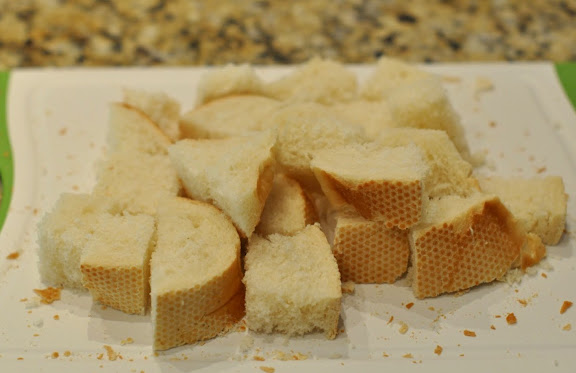 Fresh breadcrumbs are another step that elevate the finished chicken to the level of Best — they certainly aren’t necessary, but we think they make a big difference.  So if you’ve got a little extra time and bread lying around, we definitely recommend making your own crumbs.  White bread works best, even better if it’s already stale.  Just cut it into large pieces… 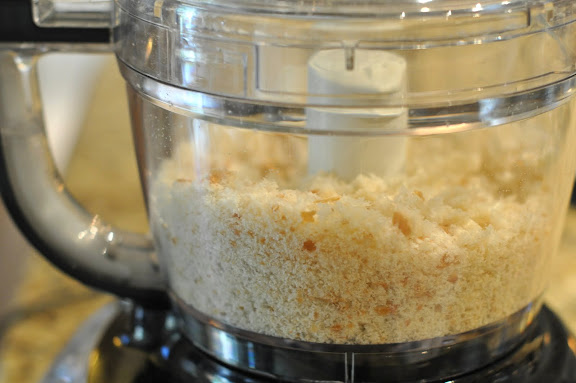 …then throw the bread pieces into the food processor and pulse them until they are crumb-sized.  If you don’t have a food processor, you can cut the bread into tiny pieces by hand. 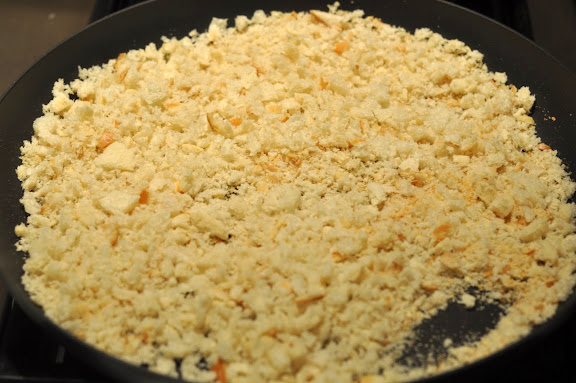 If the bread isn’t stale, toast the crumbs in a dry skillet over medium heat until they are golden brown — about 8-10 minutes.  Set the breadcrumbs aside. 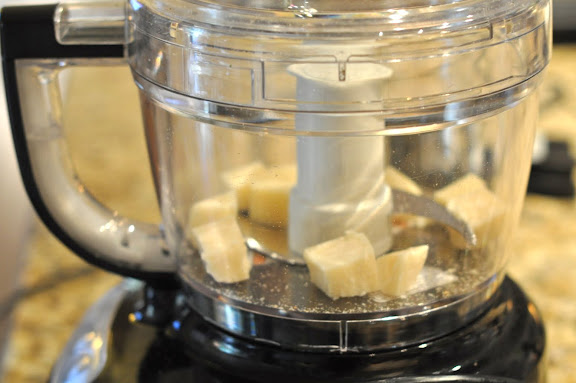 Since you’ve already got the food processor out, use it to “grate” the Parmesan cheese by cutting the parm into chunks and pulsing the chunks in the processor until they are finely grated.  You’ll need 1/4 cup for the breading and another 1/4 cup for the cheesy topping. 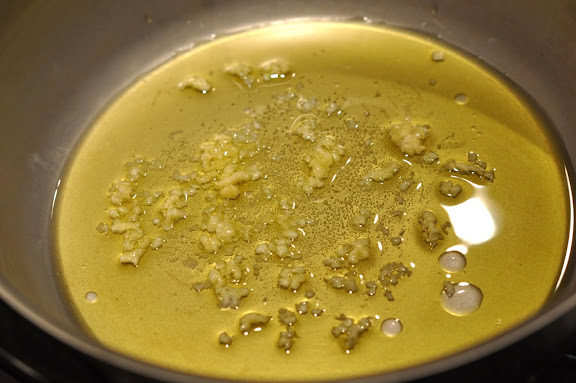 Time to make the sauce.  Heat 2 minced cloves of garlic in 1/4 cup of olive oil in a large saucepan over medium-high heat until the garlic starts to sizzle (don’t let the garlic brown, or it will become bitter.) 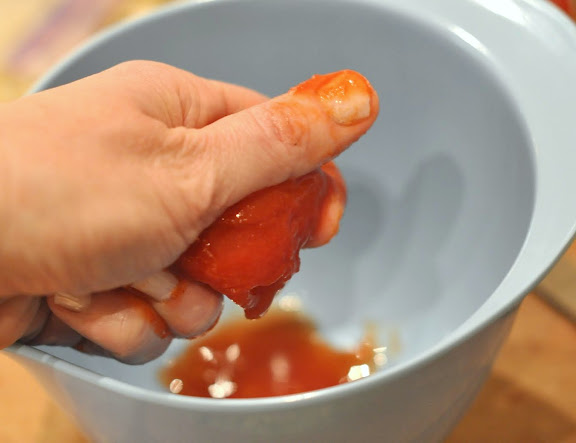 The recipe calls for 1 (28 ounce) can crushed tomatoes.  We only had canned whole tomatoes, so we crushed them by hand into a bowl to add to the sauce. 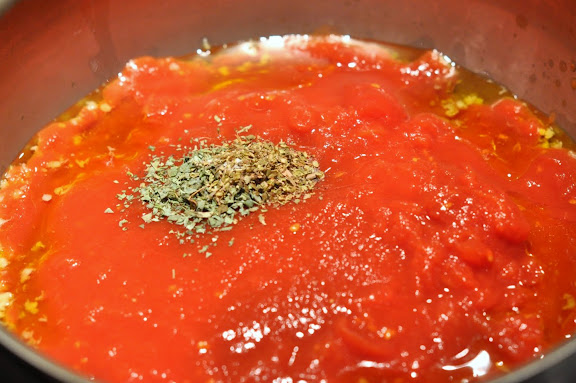 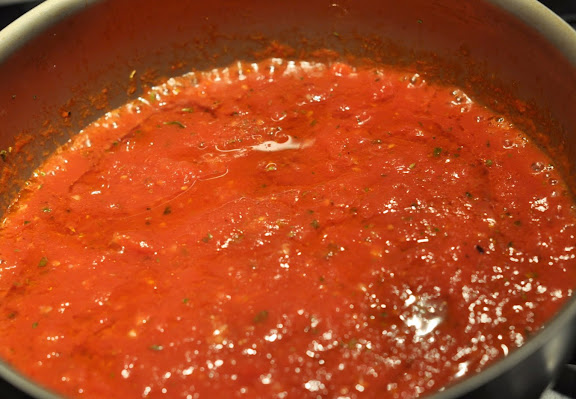 Bring the sauce to a simmer and continue simmering until it thickens and the flavors come together — about 10-15 minutes.  Taste the sauce and add more salt if needed, then cover and keep it warm. 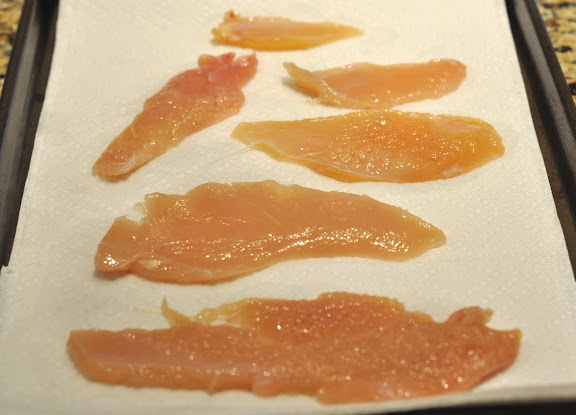 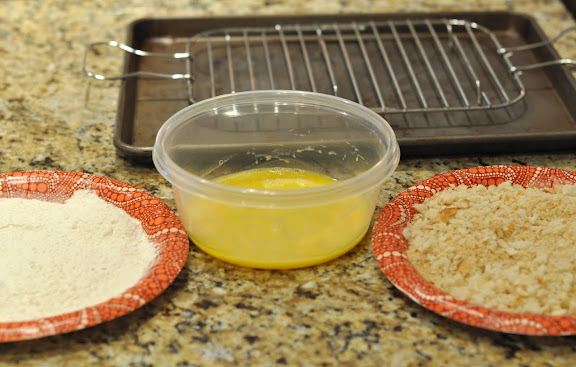 Assemble the breading station:  3/4 cup unbleached all-purpose flour in one shallow dish, 2 eggs and 1 tablespoon olive oil beaten together in another dish and 1 & 1/4 cups homemade breadcrumbs mixed with 1/4 cup grated Parmesan cheese in the third shallow dish.  (Use paper plates and tupperware as “shallow dishes” if you’re fancy like us.) 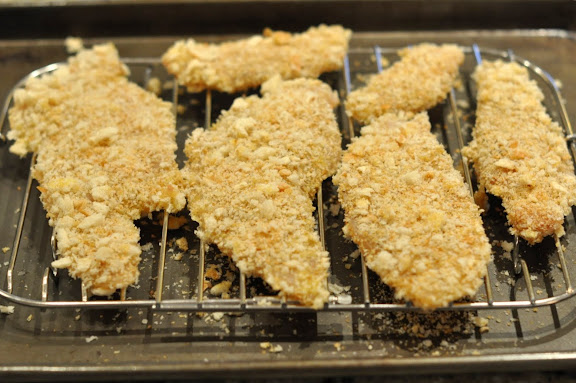 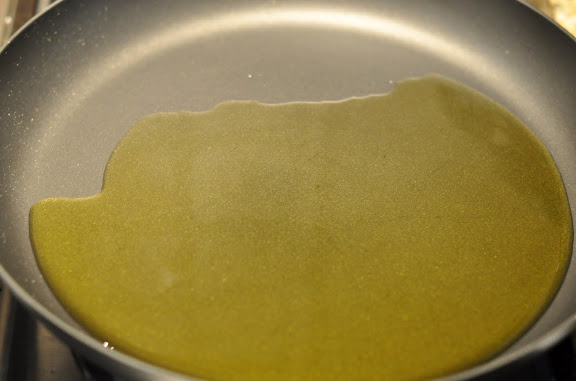 Heat about 6 tablespoons of olive oil in a nonstick skillet over medium-high heat until shimmering — about 2-3 minutes. 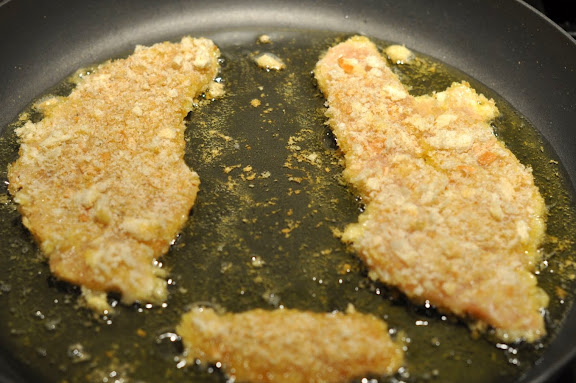 Working in batches, use tongs to gently place the breaded chicken in the hot oil and cook until golden brown on the first side — about 2-3 minutes.  Use the tongs or a spatula to gently press down on the chicken while it cooks to ensure that it browns evenly. 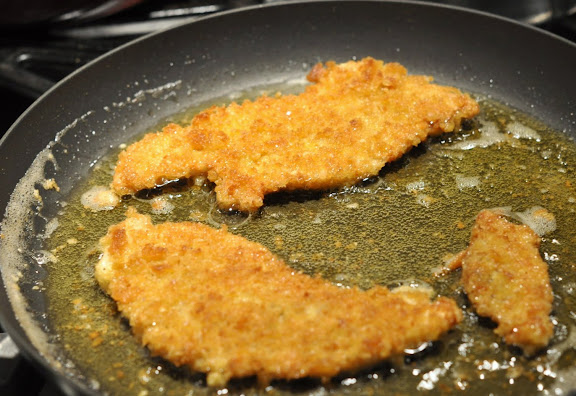 Flip the chicken and continue to cook until the second side is also golden brown — about 2-3 more minutes.  Keep a close eye on the chicken and turn down the heat a bit if necessary so that the chicken doesn’t brown too fast.  (If you are cooking a lot of chicken and the oil in the skillet gets too depleted, you may want to discard any remaining oil and heat up several tablespoons of fresh oil before beginning to cook a new batch of chicken.  We cooked all our chicken in 2 batches and did not feel the need to swap out the oil.) 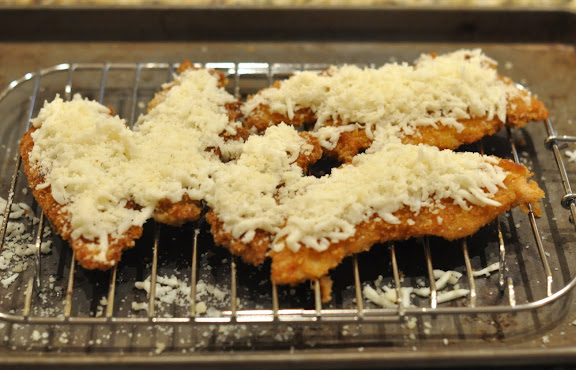 Transfer the chicken to a clean wire rack (wash the one you used before if you don’t have more than one — it had raw chicken on it) over a cookie sheet and top the chicken with grated mozzarella (about 3/4 cup total) and Parmesan (about 1/4 cup total.) 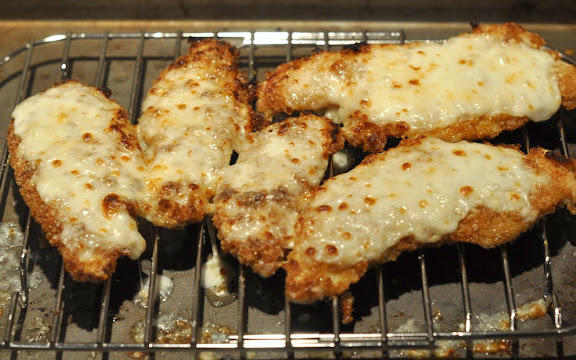 Place the chicken under the broiler until the cheeses melt and start to brown — about 3-5 minutes. 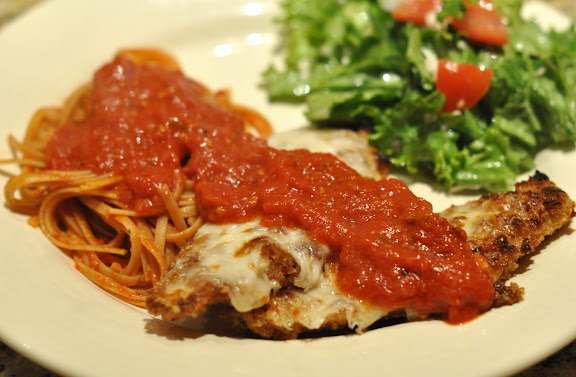 Serve the chicken topped with the sauce and side of cooked spaghetti (or similar pasta.)  Then curse any other Chicken Parmesan you’ve ever had.

P.S.  Sadly, we didn’t actually have any chickie parm leftover for sammies.  There was a little half of a tenderloin left, which Dan ate for breakfast the next morning and reported that it was still crispy.  Still crispy, straight out of the fridge — whaaaat?  Truly The Best Chicken Parmesan Ever, and worth Every Single Step.  No exaggeration.