When we found out that this month’s Charcutepalooza challenge was paté, we were more than a little intimidated.  Paté is not something we’re familiar with at all, not having ever eaten it (except maybe a random taste from a cheese plate, just to be polite and sample everything) and certainly never having cooked it.  But the whole point of undertaking these challenges is for us to cook, and eat, outside our comfort zone.  And, in a weird way, we felt like we might disappoint the Charcutepalooza founders Mrs. Wheelbarrow and The Yummy Mummy if we skipped it.  Sort of like disappointing your favorite teacher in school.  So we decided to give it a shot, and we’re glad we did!  The paté was good, and most importantly, did not dry out.  That’s the challenging part of this month’s endeavor — packing the meat and other ingredients in the terrine so that there aren’t any air pockets to dry out your end result.  We’re proud to say that we successfully made paté, in addition to all the other charcuterie challenges we have accomplished.  We may not have always liked the end result (I’m looking at you, Seafood Mousseline), but we have really enjoyed the Charcutepalooza process and appreciate all the techniques we have learned.  One thing we discovered is that paté is actually pretty easy to make, and with endless possibilities of ingredient and flavor combinations, we’ll definitely make it again sometime.

To prepare for our first foray into paté-making, we bought some at Central Market so we could see how it’s “supposed” to taste. Plus, Dan is a bit of a scientist at heart and wanted a “control sample” against which we could measure our own rendition. Turns out the control sample is supposed to taste like the worst liver you’ve ever tasted. I could barely swallow the one bite I was able to take. Luckily, not all patés are alike, and when we searched Ruhlman’s charcuterie book and saw a pate recipe with the introduction that “liver is a seasoning device here rather than the dominant flavor,” we knew we found a winner. 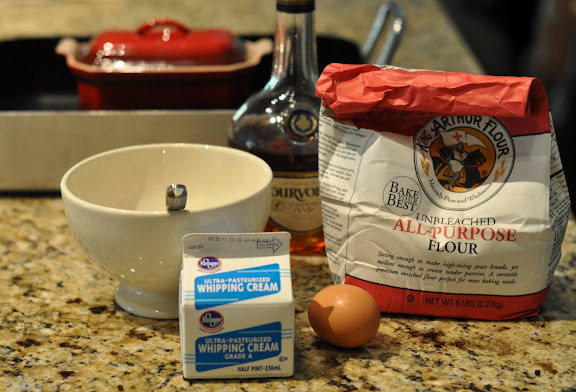 The “binding” ingredients (a/k/a “panade”) in Ruhlman’s recipe for paté de campagne (a/k/a country terrine) include flour, egg, brandy and cream.  Combine these ingredients in a small bowl and place the panade in the fridge until ready to add it to the meat. 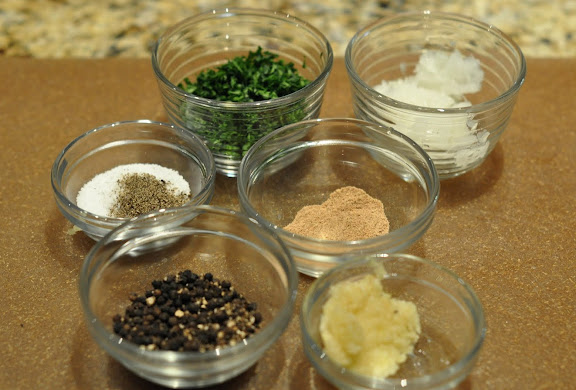 Prepare the ingredients for seasoning the paté:  chopped onion and parsley, salt & pepper, minced garlic and “paté spice.”  According to Ruhlman’s recipe, you could also fold in to the paté any of the following:  diced ham, cooked mushrooms, rinsed brine-cured green peppercorns, or duck confit (you can also mix and match these ingredients.)  We decided to follow the basic recipe, but also add peppercorns as a topping for the paté, since our control sample had them and we think they make the paté look more finished (and less like a cat food meatloaf.  Because really, who puts pepper on cat food?) 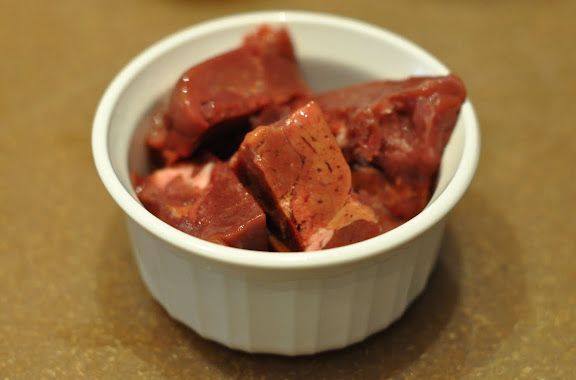 In addition to the above seasonings, there is the liver “as seasoning device” for this version of paté.  You might be aware that chicken livers are not normally shaped like rectangles.  The only liver we could find that day was frozen chicken liver, so we had to partially thaw the liver and cut pieces off the frozen block.  And by “we,” I mean Dan.  Working with raw liver does not fall within my job description as Charcutepalooza Helper/Photographer.  But I like the rectangles — makes it easier for me to pretend the liver is cut up sirloin like we use in our chili. 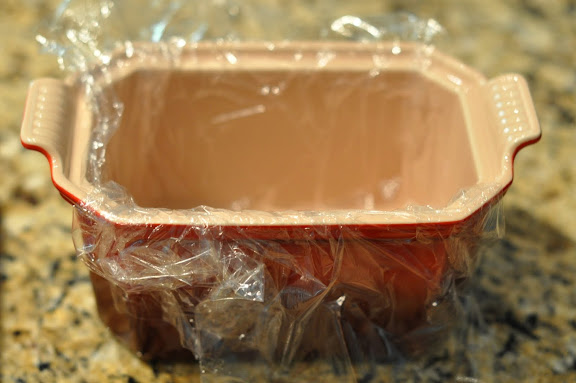 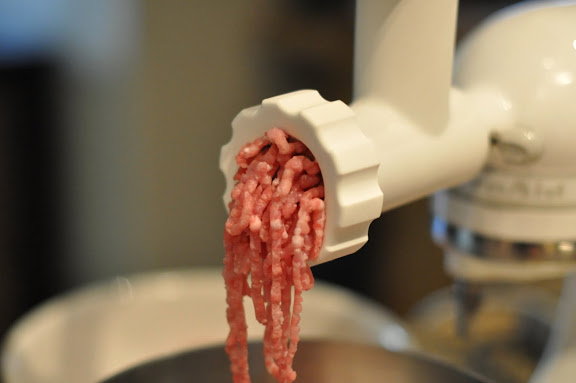 The main ingredient for this paté is pork shoulder, ground through the large die of the mixer.  As with all of the Charcutepalooza challenges involving meat grinding, it’s essential to keep all the equipment and ingredients cold throughout the assembly process.  Since so many of the recent challenges have involved ground meat, grinding has almost become old hat.  I wouldn’t have believed it back in the day of the bratwurst-related-floating-meat-bit-sink-nightmare, but the clean-up is pretty much no big deal now too. 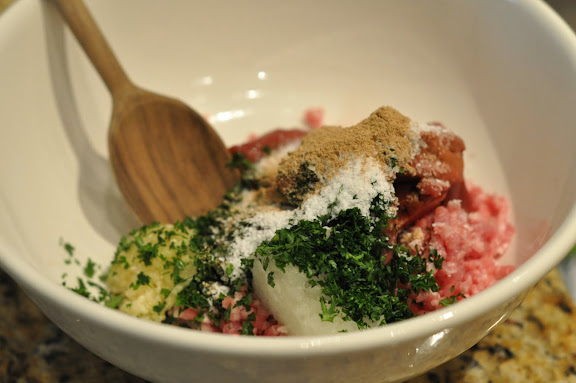 Transfer about one-third of the ground pork to a separate bowl, then add the liver, onion, parsley, garlic, pate spice and salt & pepper, and stir everything together.  Take this mixture and grind it through the small die of the mixer into the bowl of the remaining previously ground pork. 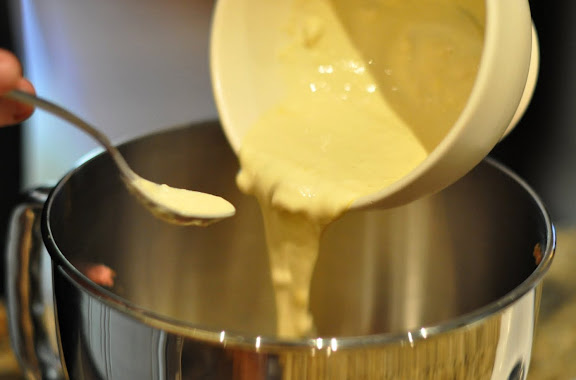 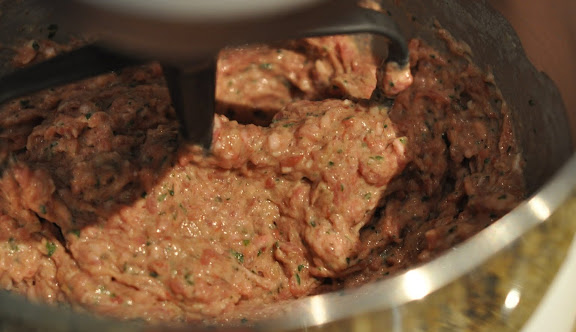 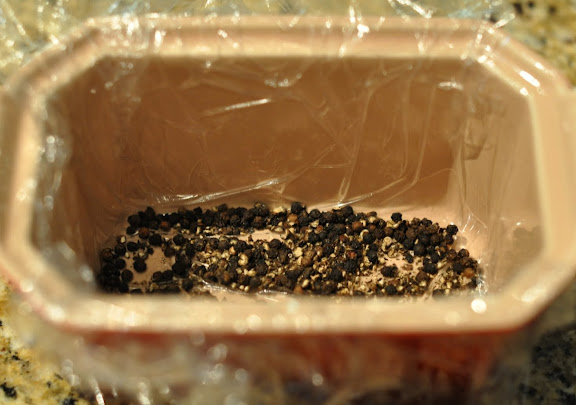 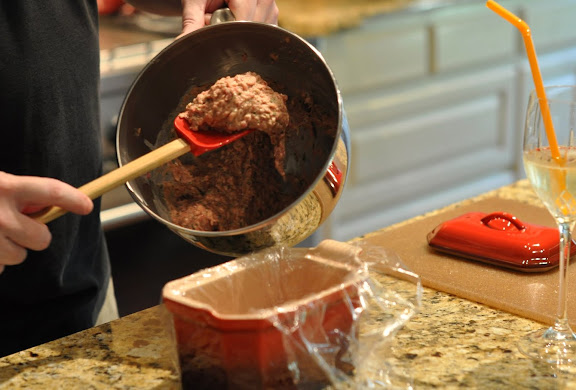 Then add the paté mixture.  (Incidentally, making sure that Dan has a straw for his wine while he is cooking with raw meat ingredients does fall within my job description as Charcutepalooza Helper/Photographer.) 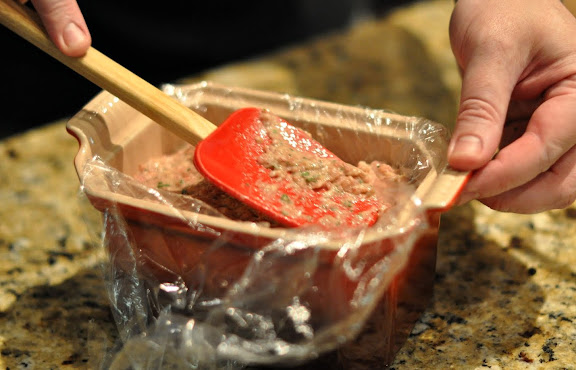 Use a spatula to pack down the paté mixture and remove any air bubbles. 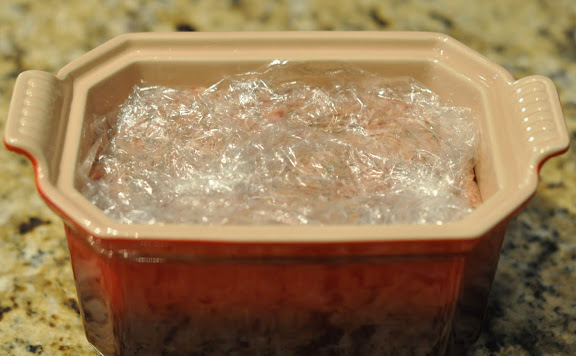 Fold the plastic wrap over the top of the paté mixture and cover the terrine with its lid. 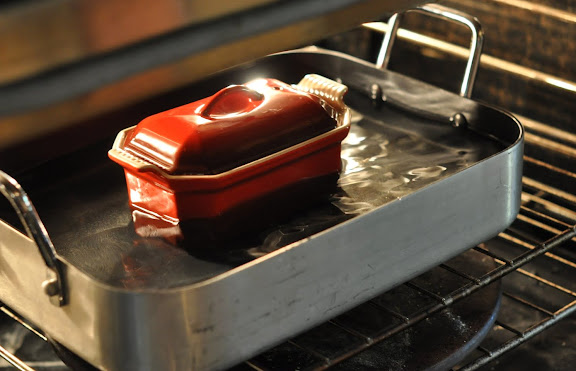 Place the terrine in a roasting pan big enough to fill with very hot tap water about halfway up the sides of the terrine.  Bake in the oven preheated to 300 degrees until the paté’s internal temperature reaches 160 degrees.  According to Ruhlman’s recipe, this should have taken about an hour.  For some reason, ours took more than two and a half hours — a noteworthy fact only because we had tickets to the movie “Contagion” that night and minding the paté’s temperature took so long that we ended up having to sit in the front row.  And apparently I wanted to bitch about it one more time.  Great movie, by the way. 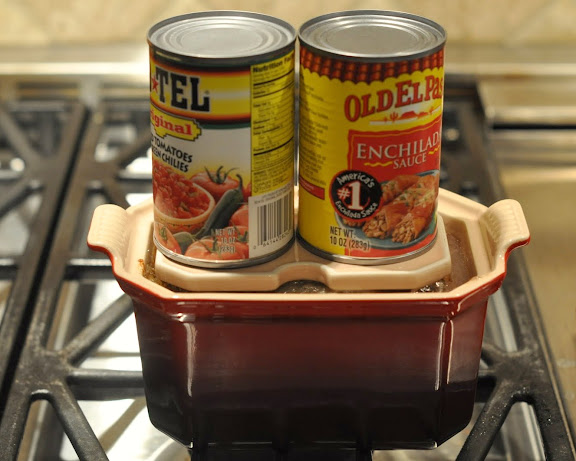 When the paté is (FINALLY) done, take the terrine out of its water bath, remove the lid and weight down the paté using a couple of cans and the terrine’s handy little plate thingy.  Allow the paté to cool to room temperature, go see a movie, then refrigerate until the paté is completely chilled — overnight or for up to a week. 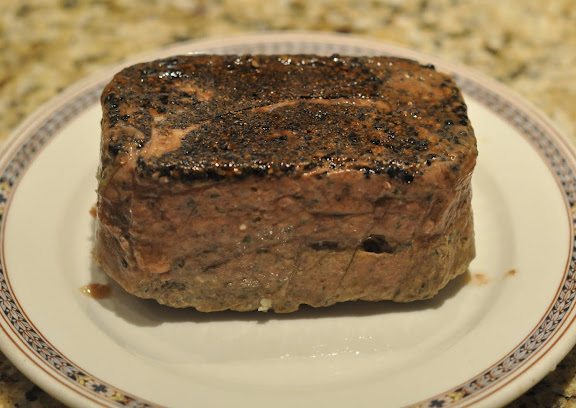 When we removed our chilled paté from the terrine, let’s just say we were skeptical about how it might taste.  Those peppercorns didn’t do a whole lot for its looks, after all.  But it smelled pretty good, so we had some amount of confidence that the paté would not be our first Charcutepalooza FAIL. 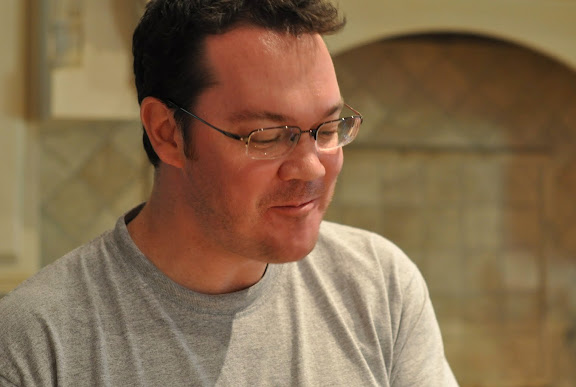 Dan takes the tentative first bite.  And . . . he likes it, hey Mikey! 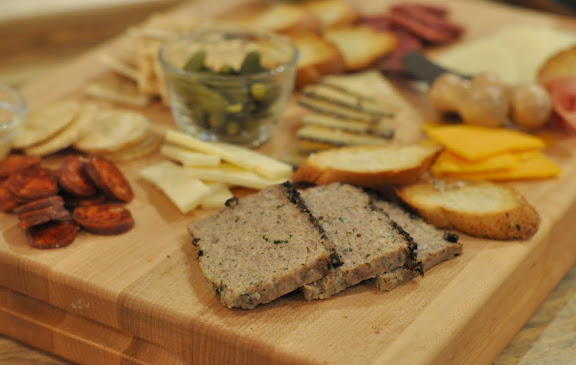 We served the paté with garlic toast rounds (thanks for the tip, Mom!) and a variety of cured meats and cheeses.  The paté really was good, with salty flavor from the pork, freshness from the parsley and a little bit of bite from the onion and garlic.  The liver added to the flavor too, without overwhelming the overall taste.  And we liked the peppery flavor from the peppercorns.  We’re so glad that we stuck it out and completed another Charcutepalooza challenge.  As self-respecting foodies, it feels good to be able to say we make our own paté.  With only three challenges remaining though, we’re a little nervous about what’s next.  For example, the October challenge is “stretching” (as in stretching our charcuterie skills) and one option involves deconstructing a chicken to make a galantine.  Ok, we can probably handle that.  We’ve come this far (and learned a lot!) and appreciate the confidence the challenges have given us up to this point.  But, under no circumstances will Dan be slaughtering a pig in our bathtub.  The line has been drawn.