Posted by Mrs. FoodieLawyer May 24, 2011 under Reviews

Last weekend, we traveled to Atlanta to attend our first-ever food blogger conference.  We had a great time, met some wonderful people (including our Charcutepalooza heroes and new friends!) and learned a thing or two along the way.  All in all, it was a successful trip that made us appreciate this community of bloggers that our little hobby has led us to join.  One of the highlights of our visit was an excursion to the Sweet Auburn Curb Market, the oldest public market in Atlanta. 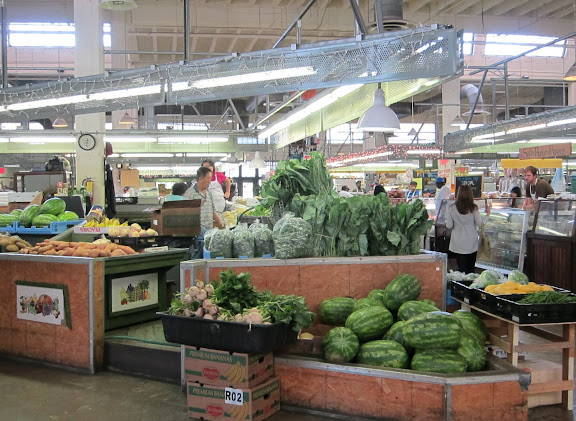 The first thing you see when you walk in the market is a wide array of big, bountiful and beautiful produce. 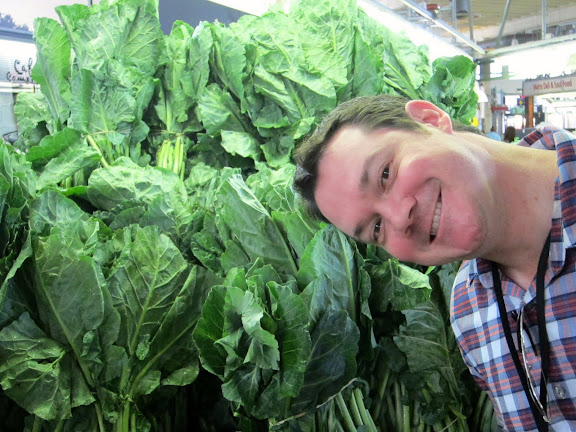 Dan attempts to demonstrate that these greens were as big as his head. 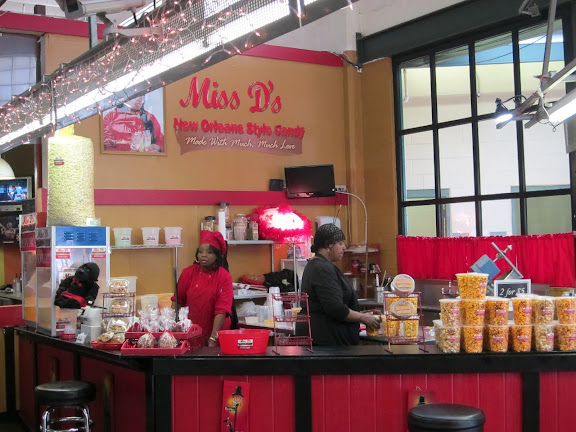 Also near the entrance, these ladies were making several varieties of flavored popcorn, among other treats.  They generously offered tasting portions, since some of the flavors were rather unusual. 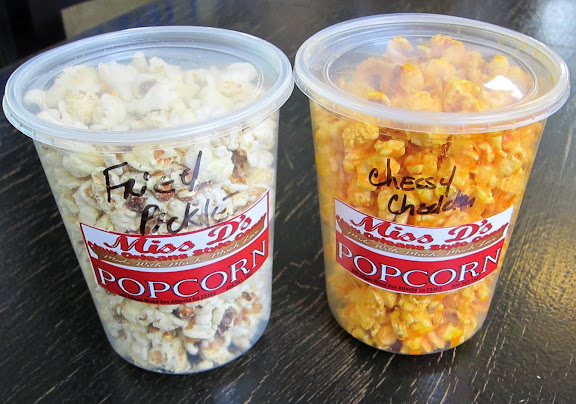 For example, the “Fried Pickle” flavor is not one you would typically associate with popcorn (or necessarily think would be very good.)  But after tasting how delicious it was, we had to buy some.  It was salty, with just a hint of dill pickle taste that did not overwhelm the freshly-popped popcorn flavor. 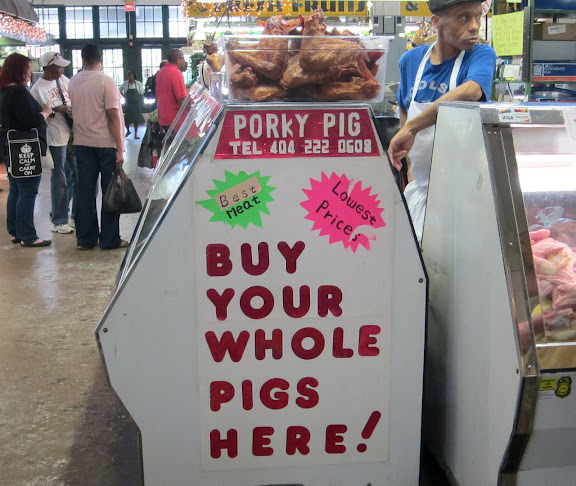 There was an abundance of meat (seemed to be mostly pig, with some beef) at the market as well.  The guy selling whole pigs appears to be wondering who are all these people wandering around with cameras? 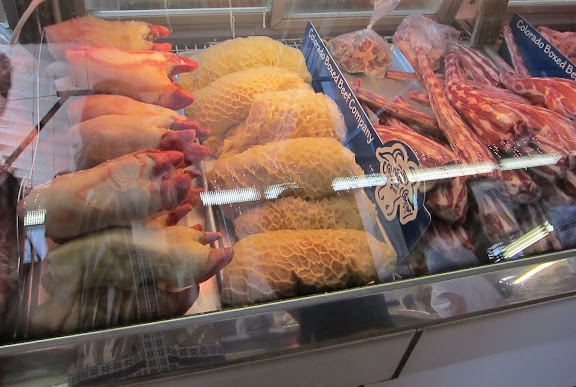 Some of the meat was less appetizing than the rest. Unless of course feet, stomach and whatever that stuff is on the far right are your thing. 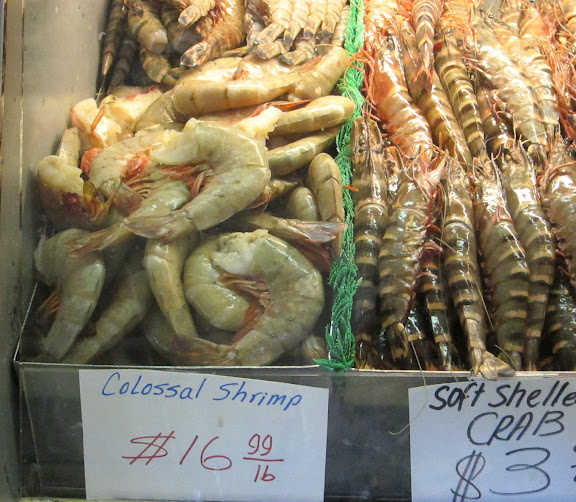 The market also had plenty of fresh seafood, including the biggest shrimp I have ever seen.  Colossal indeed.  (Where is Dan with his head for perspective?) 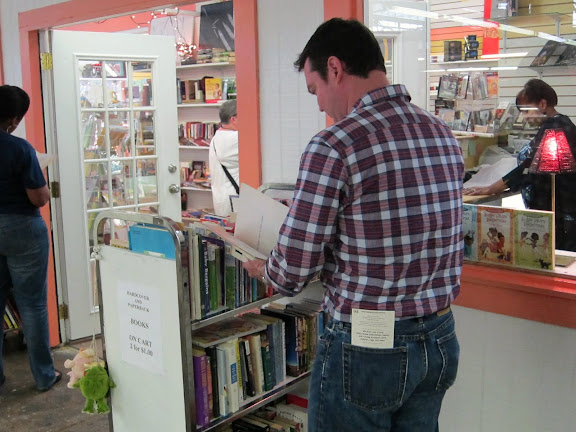 Apparently browsing some books.  There was a tiny used bookstore randomly tucked in one of the corners of the market.  Dan loves old books almost as much as food. 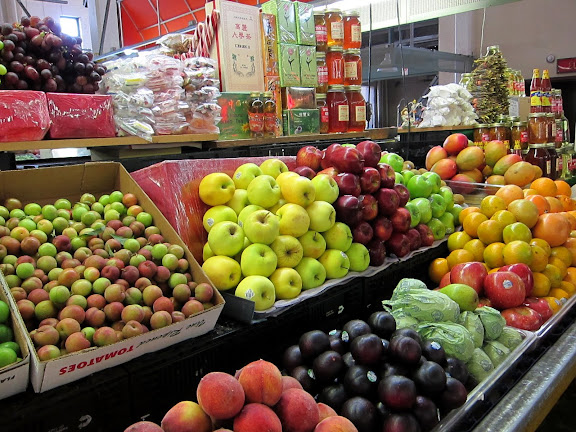 The market also had a plethora of gorgeous fresh fruit. 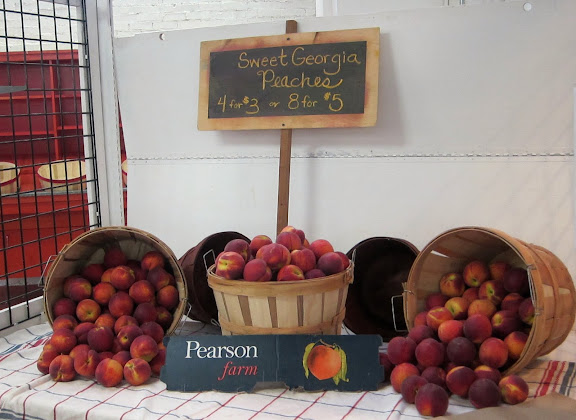 Including Georgia peaches, of course.  These peaches came into play later in something that was so good I would travel back to Atlanta just to go to this market and get it again. 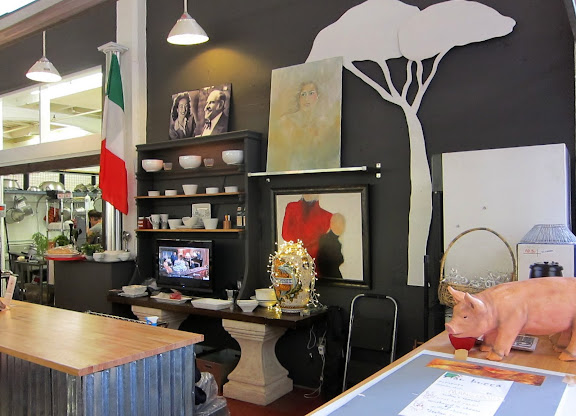 Inside the market were several different food stations, including this Italian-themed and chicly decorated (love the paintings!) little bistro type place.  The pig presided over the menu, advertising that the paninni of the day was meatball.  Unfortunately, we were too full to try it after we completed our rounds of the market. 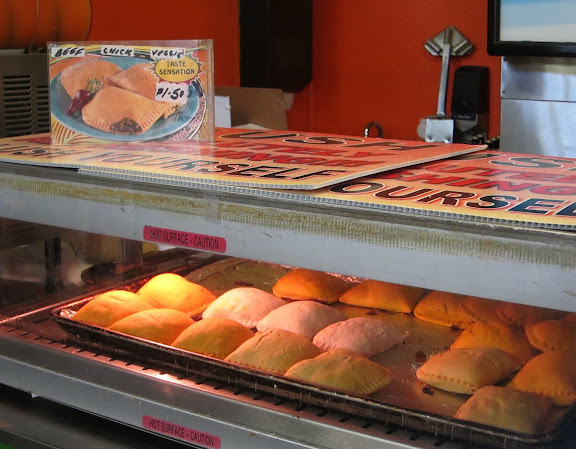 The first food we sampled that day was a Jamaican chicken patty.  I was ridiculously excited to see this little Caribbean food station because I haven’t had a chicken patty in many many years.  I was introduced to this delicacy way back when I used to travel to Hartford, Connecticut for a work project.  A friend there was from Jamaica and his family had a bakery in Hartford specializing in these patties (they also come with beef or vegetables, but the chicken ones are by far the best.)  I love those things so much that I once brought some back to Dallas on the plane packed in a cooler with dry ice (pre-9/11, easy airport security days.)  A chicken patty would probably be on my last meal menu, I seriously adore them that much. 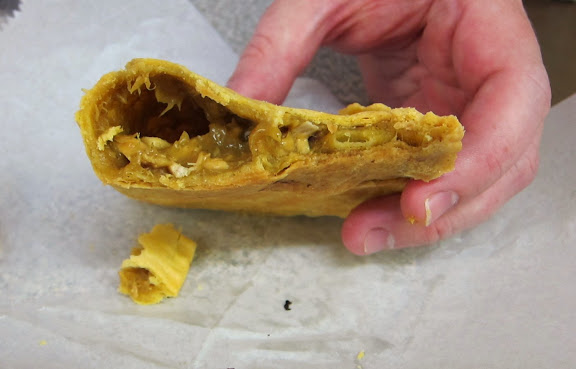 I haven’t been able to find a chicken patty since those Hartford trips, so I had to try one from the Atlanta market.  It was good, but not as authentic or delicious as the patties from Hartford.  The patty crust was not nearly as light and flaky.  The chicken, while well-seasoned, may have been a bit heavy on the curry without enough spice from the jerk seasoning.  I also would have preferred the texture of the chicken to be a little more ground, rather than diced, and there to be more of it filling the patty.  Apparently I am a chicken patty snob. 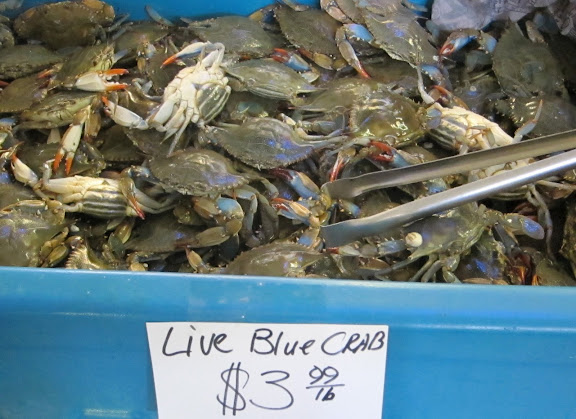 This blue crab was so beautiful we actually discussed whether there was any way we could somehow take it back to our hotel room and cook it, using only a microwave and tiny coffee maker.  MacGruber could have done it.  Seeing so many amazing food items, but not being able to take any home to cook was almost cruel. Another food station in the market featured burgers, and a really really long line.  So many food options, such little time. 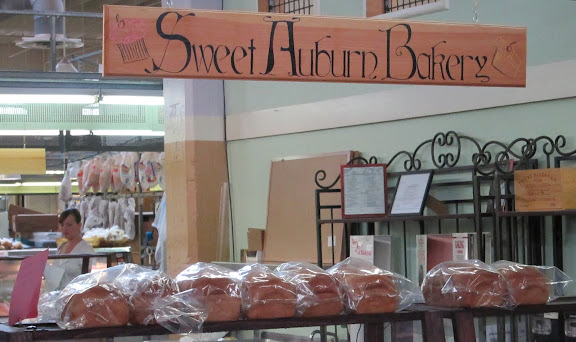 No time or tummy room for dessert either, but the bakery station offered free samples of cheesecake that we heard were outstanding. 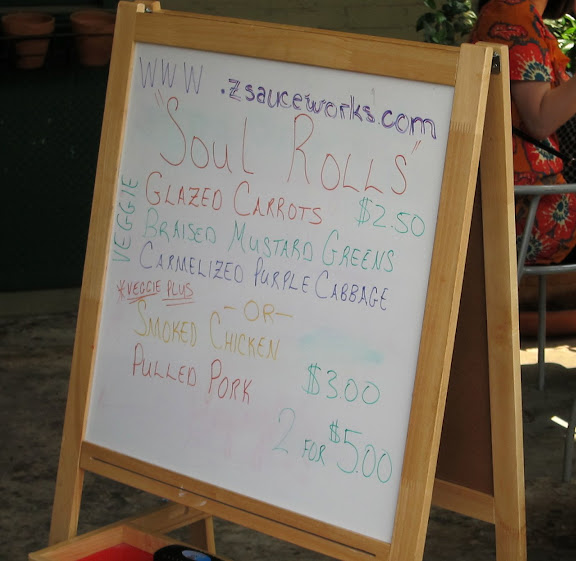 Several additional food options were set up outside the market.  These “soul rolls” looked interesting, but we had our sights set elsewhere. 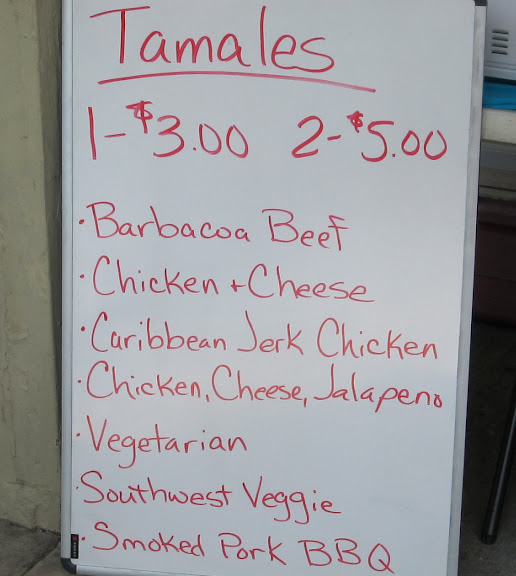 Sorry Tamales, but we can get you in Dallas. 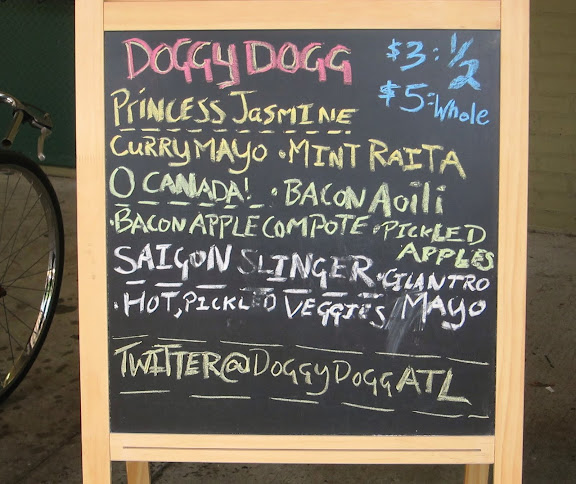 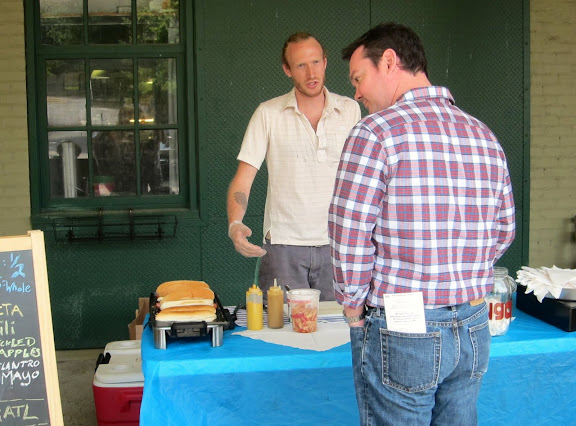 Dan carefully considers his options, with advice from the chef. 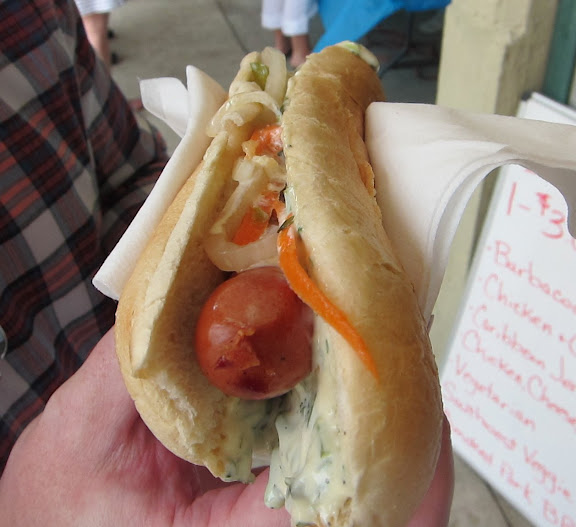 The “Saigon Slinger” — an excellent choice.  A juicy, beefy dog in a soft fresh bun with hot pickled veggies and cilantro mayo.  Perfection. 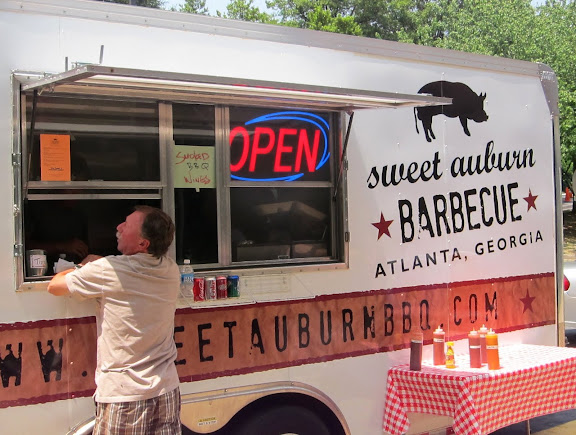 Food trucks are relatively rare in Dallas (at least in the areas we frequent), so we were excited to try a little Sweet Auburn Barbecue. 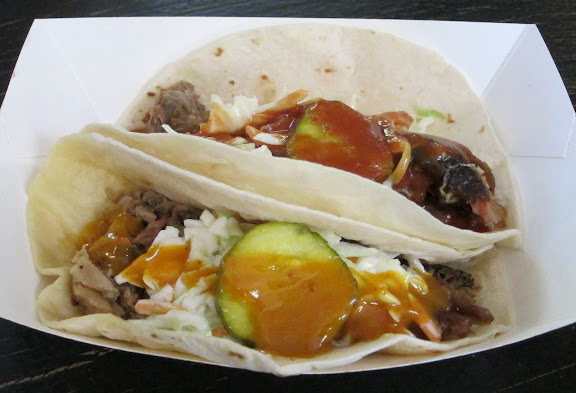 We both went with the “Auburn Taco,” featuring BBQ pork garnished with Asian pear cole slaw and a pickle slice.  Dan topped his with the “smokey” sauce and I had the “hot-lanta” sauce.  So simple, and simply delicious. 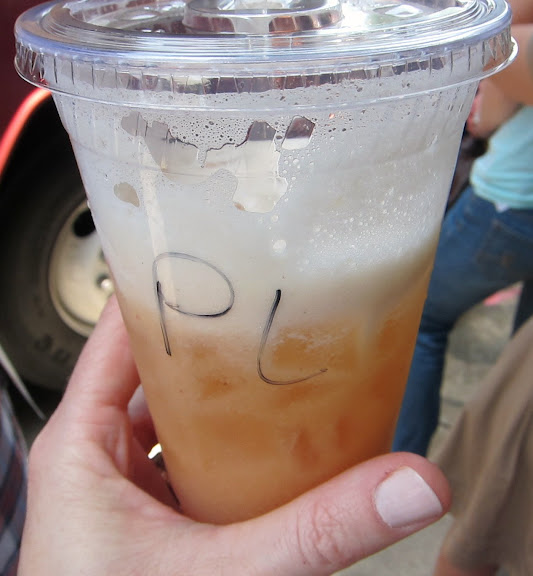 Finally — BEHOLD — the Peach Lemonade, a/k/a Best. Drink. Ever.  Not too sweet, not too sour.  As far as we could tell, they make it by blending fresh peeled peaches, adding fresh lemonade and pouring it over ice.  There must be a secret ingredient — it’s too delicious to be so basic.  Maybe the secret is Georgia.  My mouth is watering while typing this and looking at the photo, and we are inspired to attempt to find out whether Texas peaches will suffice.  Many thanks to all the vendors of the market and organizers of the conference for the inspiration and a fantastic foodie afternoon!