Bobby Flay knows his way around a grill.  We have several of his grilling cookbooks and I like to consult them when we’re in the mood for something a little different than the usual grill recipes.  Bobby tends to use a lot of interesting rubs and sauces in his grilling, and this dish is no exception.  We like how the rich and earthy mushroom flavor of the sauce complements the spicy (but not too spicy) rub on the pork.  This mushroom vinaigrette would also be good served on other proteins – like a grilled chicken breast or a nice filet mignon. 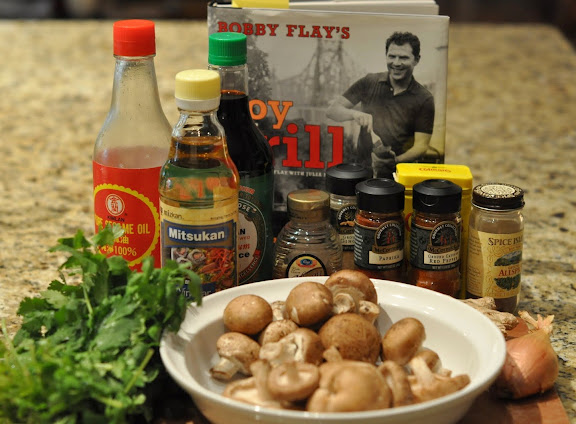 The mushroom vinaigrette ingredients include peanut oil (we didn’t have any so we used canola instead), a shallot, fresh ginger, garlic, mushrooms, soy sauce, rice vinegar, honey, sesame oil, cilantro and salt & pepper.  Although there are several Asian ingredients in the recipe, the overall flavor of the vinaigrette is more subtle than a traditional Asian dish.

The Asian flavor of the rub is a little more pronounced, with ingredients including paprika, dry mustard, ground star anise, ground ginger, ground allspice, cayenne pepper and salt & pepper.  If you’re not familiar with it, star anise is a spice often used in Chinese cooking and it has a very particular flavor, a little bit like licorice.  It’s a flavor we don’t particularly like, so we omitted it from the recipe. 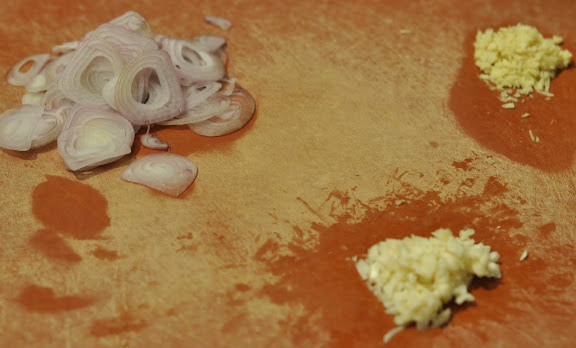 Thinly slice the shallot, mince the ginger, and finely chop the garlic for the vinaigrette. 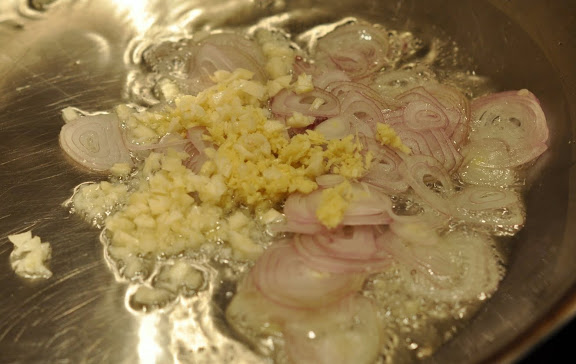 Heat the oil in a large skillet over medium-high heat, then add the shallot, ginger and garlic.  Cook these ingredients until soft — about 5 minutes.

Thinly slice the mushrooms.  Bobby’s recipe calls for assorted mushrooms such as chanterelle, cremini, shiitake, and oyster.  But you can use any kind of mushrooms you like or can find.  We used regular old button mushrooms, “baby bellas,” and shiitake mushrooms.  We found some chanterelle mushrooms at our local Central Market, but those suckers were way out of our price range so we didn’t get them. 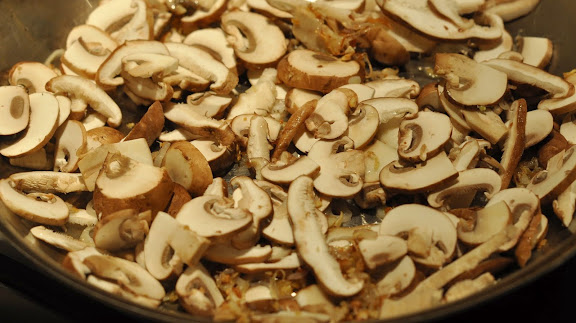 Raise the heat to high and add the mushrooms to the skillet with the onion mixture. 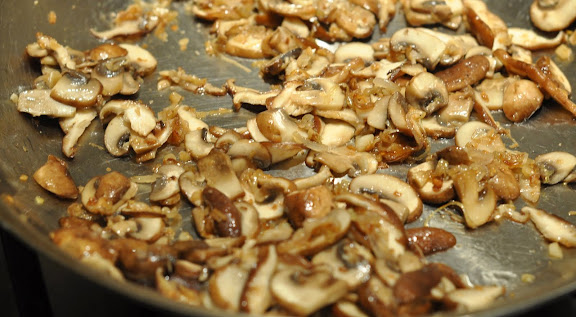 Cook the mushrooms until they are soft — about 8 minutes. 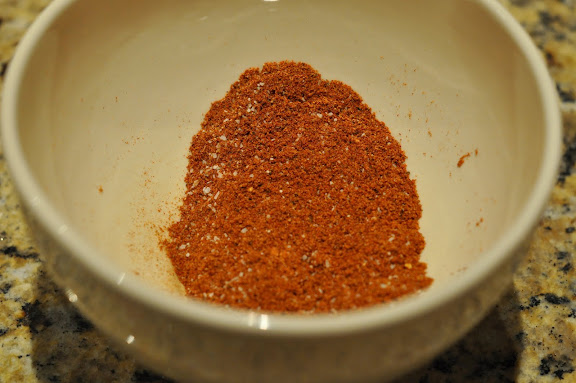 Mix together the rub ingredients.  If you want, make a little extra and store it in a sealed container to use over the next several months. 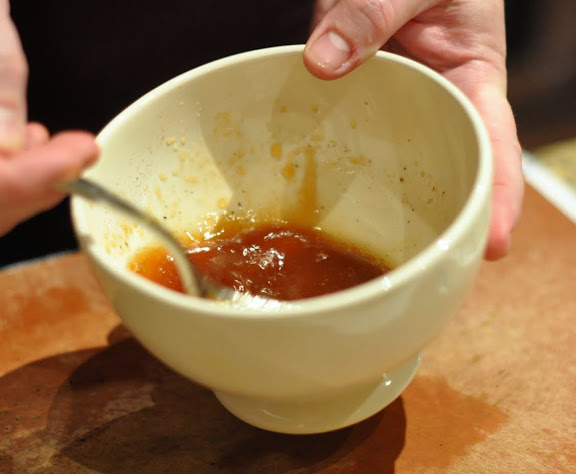 Whisk together the soy sauce, vinegar, honey and sesame oil.  Then gradually whisk in about 1/2 cup of oil and season with salt and pepper. 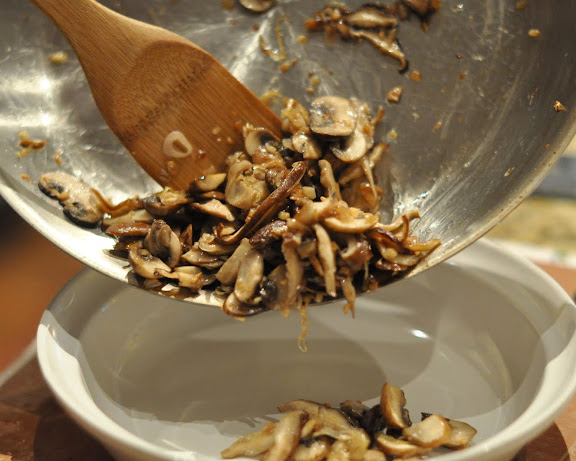 Place the cooked mushroom mixture in a large bowl. 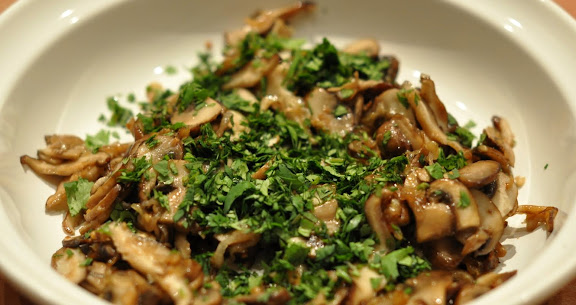 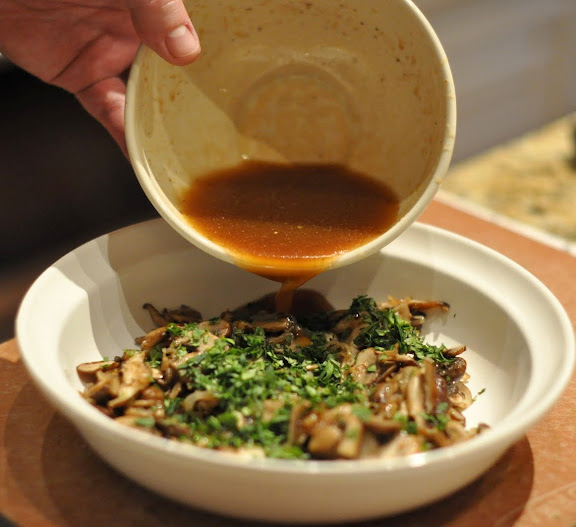 Add the soy mixture and gently mix everything together.  You may not want to add all of the liquid, depending on how saucy you like your sauce. 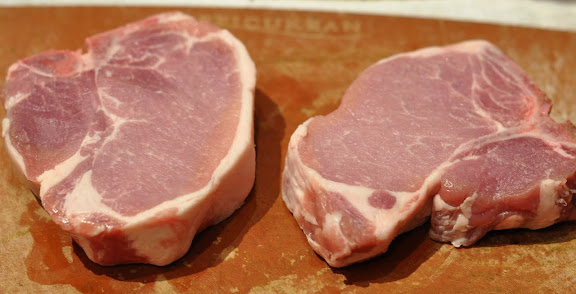 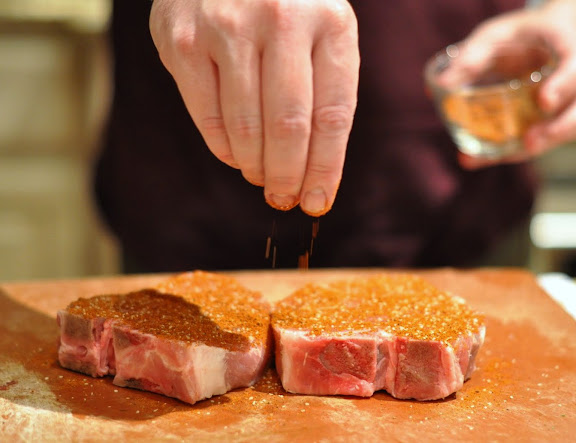 The recipe called for rubbing both sides of the pork chops with oil, but Dan thought that this was an unnecessary step and skipped it.  Sprinkle the rub over the chops.  Although the recipe calls for adding the rub to only one side of the pork, we decided more would be better so we coated both sides with the rub. 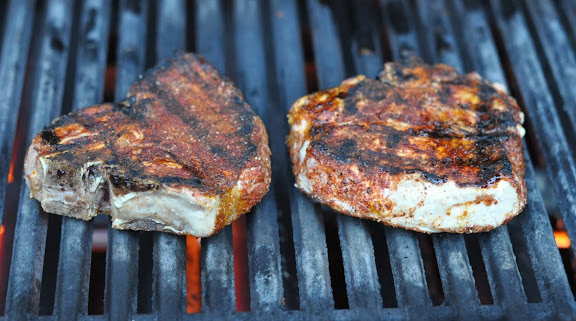 Grill the chops over medium-high heat for about 7 minutes, then turn them over and continue grilling over medium heat for another 5-6 minutes, until the pork chops are medium and have an internal temperature of approximately 135 degrees. 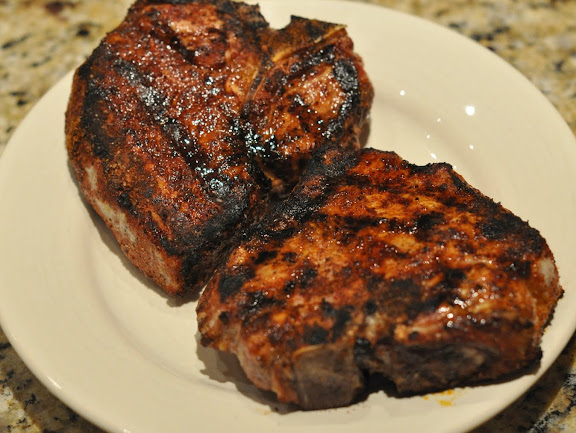 When they are done, allow the chops to rest for a few minutes. 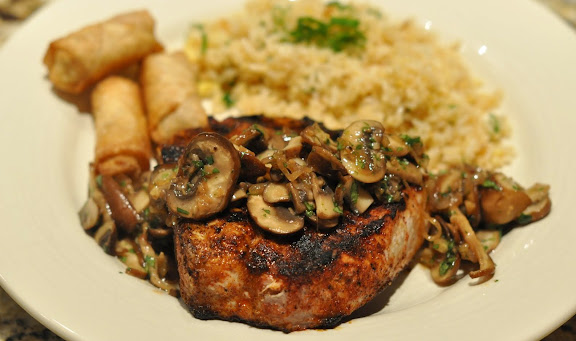 Spoon the mushroom vinaigrette over the pork and serve.  We served ours with a simple egg fried rice and store-bought eggrolls.  The thing we loved most about this recipe is the very versatile vinaigrette.  We look forward to trying it in many other dishes.