I always consider it a personal triumph when I find a vegetarian recipe that Dan really enjoys.  I scored big with this eggplant pasta.  We both loved it, and we have officially added it to our recipe rotation.  No offense to anyone who is vegetarian or adores vegetables, but I think the reason we liked this so much is that it doesn’t taste like vegetables.  The eggplant is substantial and gives the pasta an almost meaty flavor.  This pasta is a good one to try if you want to work more vegetarian meals into your routine but aren’t a big fan of veggies.  Baby steps! 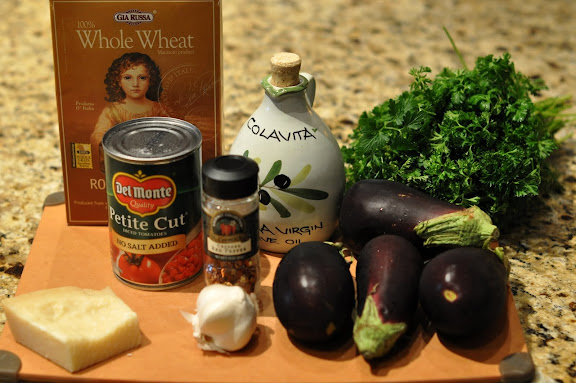 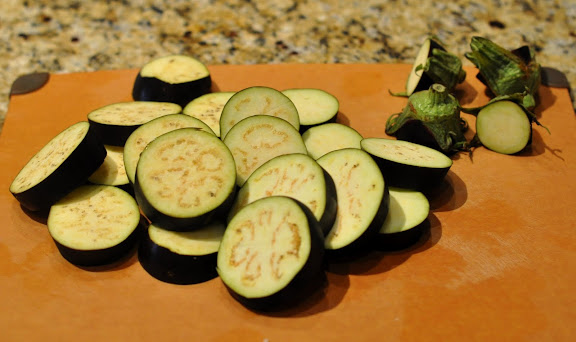 I found this recipe in Cook’s Illustrated’s Italian Classics.  We start to sound like a broken record when we talk about Cook’s Illustrated and their cookbooks, but they really are among the best cookbooks we have used, especially when it comes to recipes or food with which we don’t have much experience — like eggplant.  Cooking eggplant can be tricky because it is full of liquid and can turn out mushy when you cook it.  The Cook’s Illustrated folks solved this problem by drawing the excess moisture out of the eggplant with salt before cooking it.  Start by cutting the tops off the eggplant and slicing them into 1 inch thick circles.  You’ll cut them into 3/4 inch cubes after the salting process, but we found it to be easier to coat all the pieces with salt by doing so while the eggplant was in bigger slices rather than cubes. 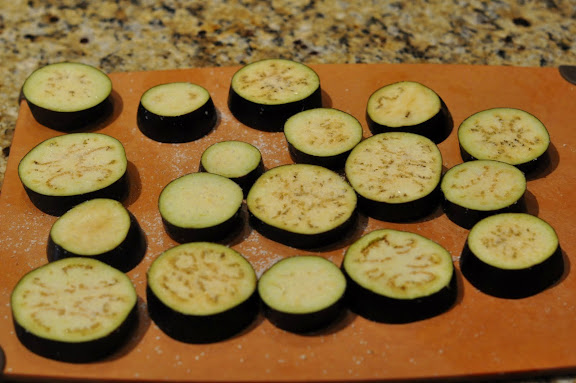 Generously sprinkle kosher salt on both sides of all the eggplant slices. 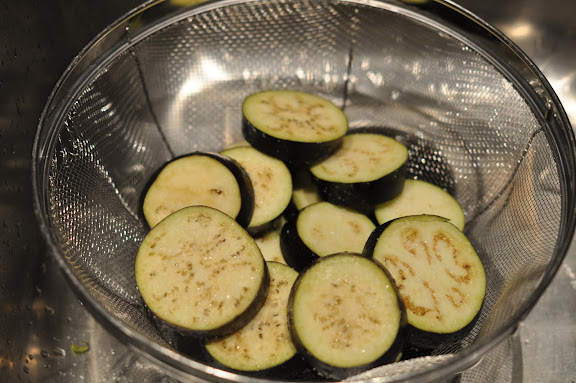 Place the slices in a colander in the sink to allow the salt to do its job for about 30 minutes. 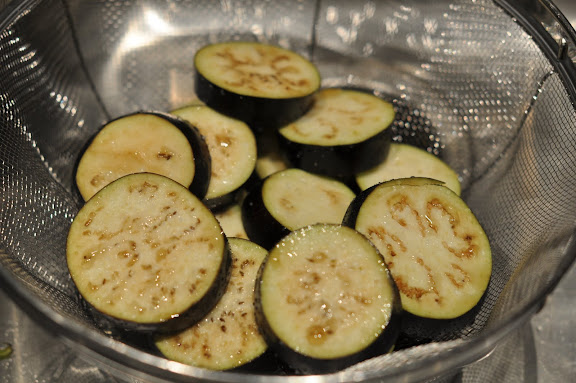 After 30 minutes, you’ll be able to see that the excess moisture has oozed out of the eggplant.  (Kind of gross, but not nearly as gross as mushy cooked eggplant!)  Next, wipe off the salt and pat the eggplant dry with paper towels or a kitchen towel. 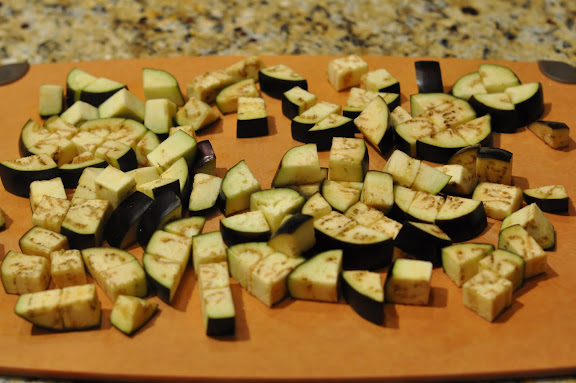 Then cut the eggplant into 3/4 inch cubes. 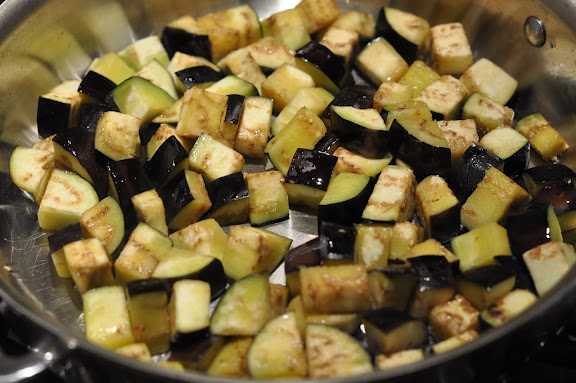 Heat the olive oil in a large skillet over medium-high heat until it shimmers.  Then add the eggplant and saute until it begins to brown — about 4 minutes. 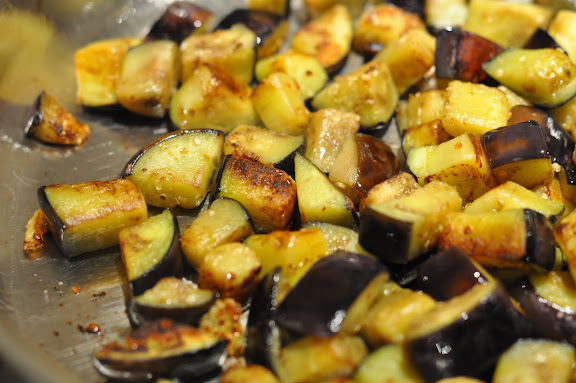 Reduce the heat to medium-low and cook until the eggplant is tender and browned on all sides, stirring occasionally — about 10-15 minutes. 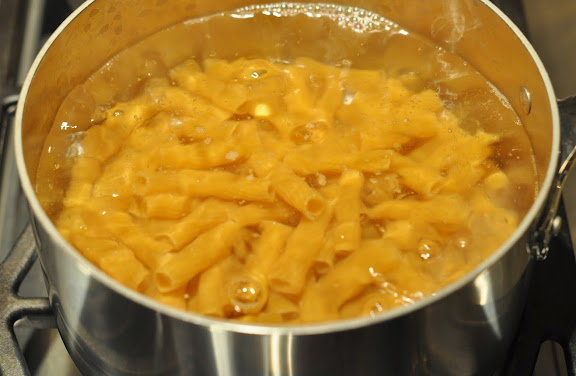 While the eggplant browns, cook the pasta according to the package directions. 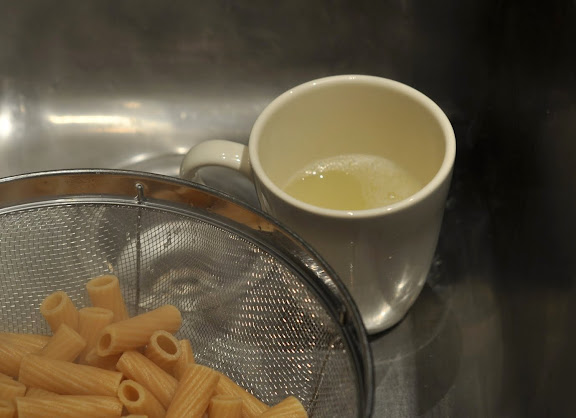 When you drain the pasta, reserve about 1/2 a cup of the pasta water, just in case you need to thin out the finished sauce a bit. 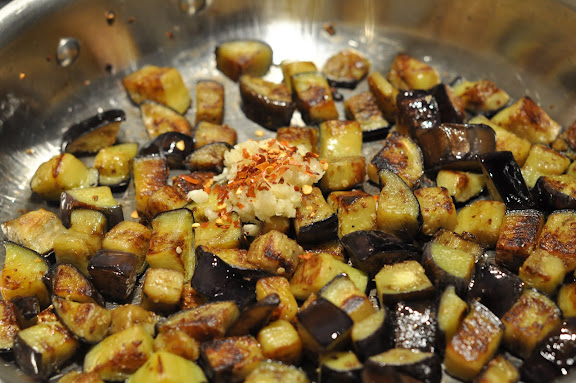 When the eggplant is nicely browned and tender, stir in the minced garlic and hot red pepper flakes, then cook for about 2 minutes to blend the flavors. 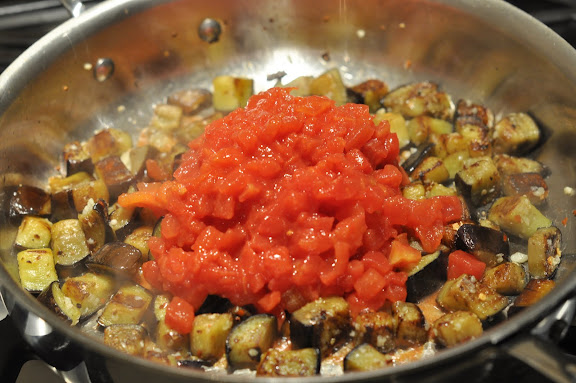 Add the tomatoes.  The original recipe called for crushed tomatoes, but we used “petite cut” diced tomatoes and they worked well. 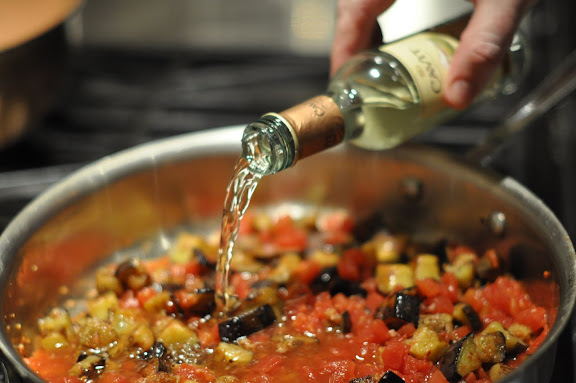 This part was not in the original recipe, but we added a little white wine to the sauce in order to make the cooked tomatoes into more of a sauce and create another dimension of flavor.  Bring the sauce to a simmer and cook until it thickens — about 2-3 minutes.  Season with salt and pepper to taste. 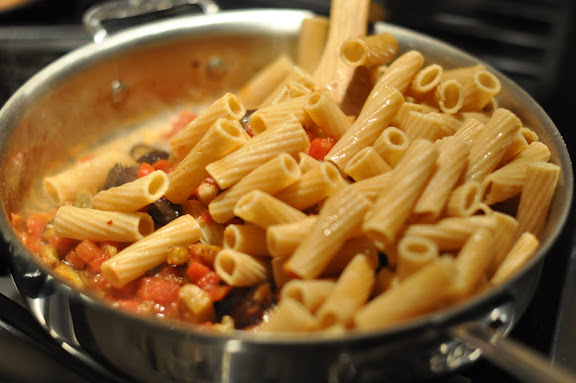 Stir the cooked pasta into the sauce and add some of the reserved pasta water if the sauce seems too dry. 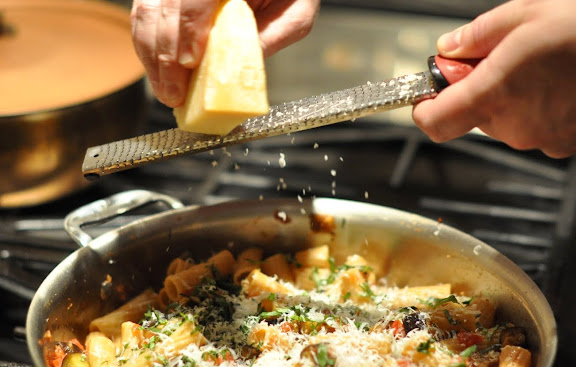 Add finely chopped parsley or basil and grated parmesan for garnish.  The original recipe called for grated “ricotta salata,” but we didn’t find any at the grocery store so we just used parmesan.  We also gave the finished pasta very light drizzle of good olive oil. 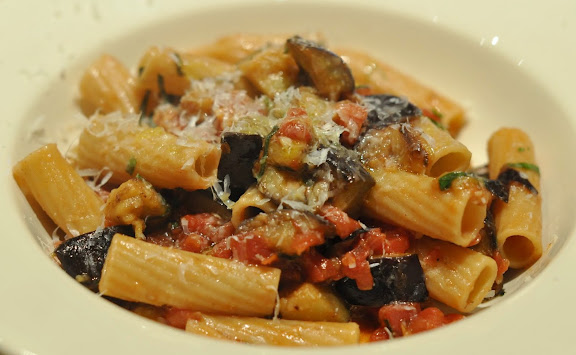 This recipe is a keeper.  We love that it is meat-less and healthy, but still flavor-full and hearty!

Heat the olive oil in a large skillet over medium-high heat until it shimmers.  Add the eggplant and saute until it begins to brown — about 4 minutes.  Reduce the heat to medium-low and cook the eggplant, stirring occasionally, until it is tender and browned on all sides — about 10-15 minutes.  While the eggplant browns, cook the pasta according to the package directions, then drain and reserve about ½ cup of the pasta water to use in the sauce if needed.  Add the garlic and red pepper flakes to the eggplant and cook to blend the flavors — about 2 minutes.  Add the tomatoes and white wine, then bring the sauce to a simmer.  Cook until the sauce thickens — about 2-3 minutes.  Season with salt and pepper.

Add the pasta to the sauce and toss.  If the sauce seems too dry, stir in some of the reserved pasta water, 1 teaspoon at a time.  Garnish the finished pasta with grated parmesan, finely chopped basil or parsley and a drizzle of good olive oil.