Is there a more fun way to grill a whole chicken than sitting it on a can of beer?  We don’t think so either.  We had some loved ones over for dinner this weekend and grilled a pair of chickens.  Grilling the chickens on cans of beer allows them to cook evenly, and the steaming beer keeps the chicken nice and juicy.  Beer Can Chicken is pretty easy to do, especially with Dan’s perfected technique for removing the can from the chicken when it’s done. 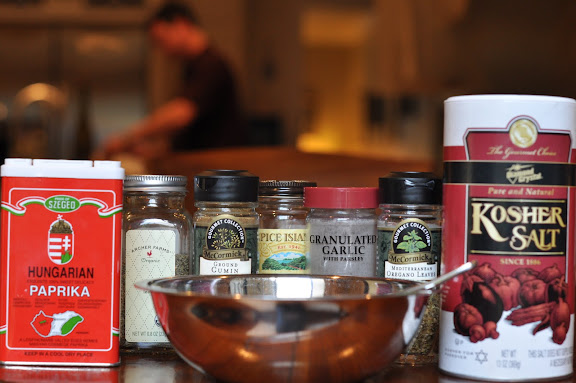 We use a fairly basic spice rub for the chicken — two parts Kosher salt and paprika and one part thyme, ground cumin, crushed red pepper, granulated garlic and oregano. 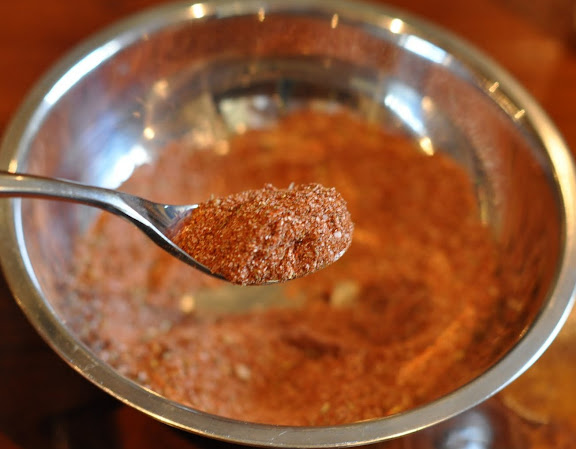 The spice rub.  Dan has made this to give as Christmas presents to our foodie friends and family.  My younger brother Adam calls this rub “Dan The Man” and uses it on many of his grill dishes. 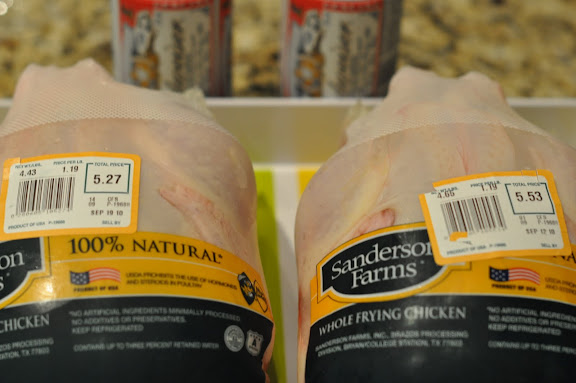 We were cooking for 5 on this night and wanted enough chicken for some leftovers later in the week, so we used two chickens, each about 4 and a half pounds.  Remove the chickens from their packaging and rinse them for a few seconds under cold water.  If there are any big visible pieces of fat, cut those off, and throw away any chicken innards that may be in the cavity.  Finally, pat the chickens dry and place them on a tray to take out the grill.  (Be sure to wash your hands after handling the raw chicken). 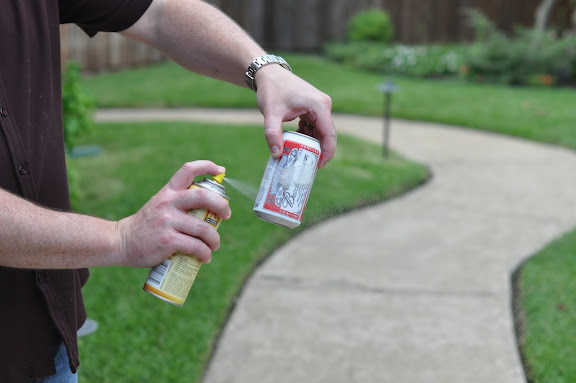 One of Dan’s secrets for successfully executing Beer Can Chicken is to spray the beer can with non-stick cooking spray before sitting the chicken on it.  Doing so makes it much easier to remove the beer can from the chicken after it’s finished grilling. 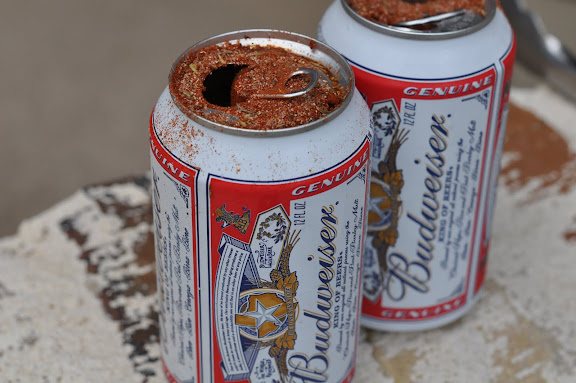 To prepare the beer can for the chicken, first drink half of the beer.  Or pour it out if you are comfortable wasting America’s favorite beer.  Pour about a tablespoon of the spice rub into the remaining beer in the can.  This will help to flavor the chicken as is grills. 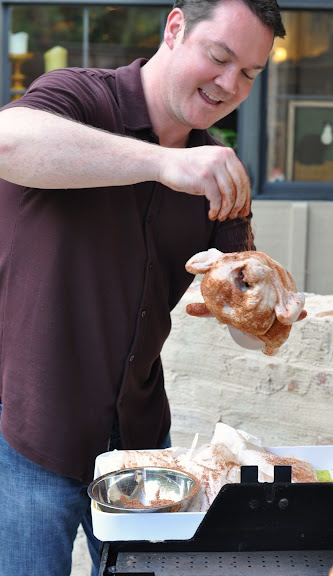 Generously sprinkle the rub all over the chicken.  Doing this step outside at the grill minimizes the amount of leftover spice rub sprinkled all over the kitchen floor, which keeps the Mrs. happy. 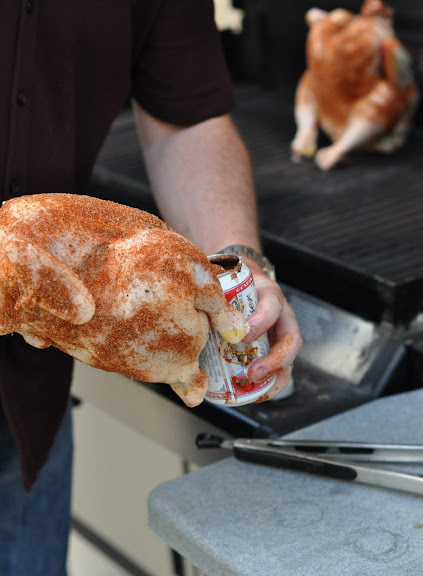 After adding the spice rub, it’s time to violate the chicken by inserting the can into the chicken’s butt cavity. 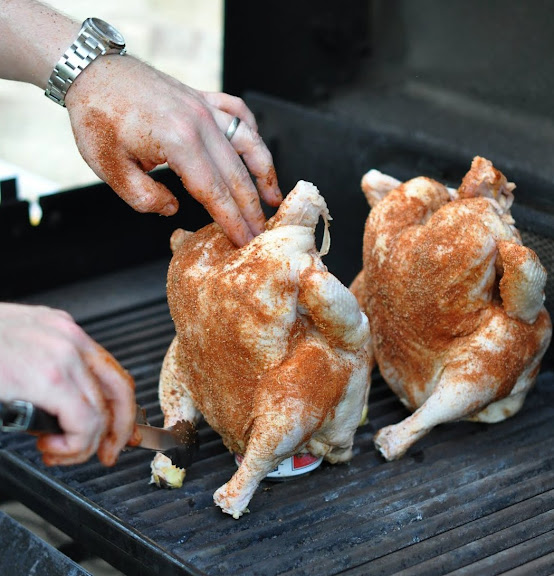 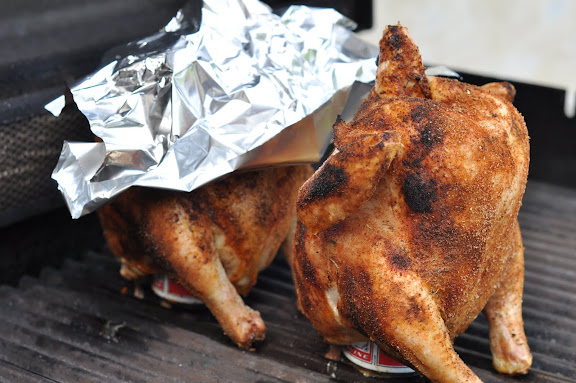 Cook the chicken over direct medium heat for 5 or so minutes, then turn off the grill burners under the chicken and cook for another hour or so under indirect heat.  If the chicken breasts start to get too dark and cook too quickly, simply tent a small piece of aluminum foil over that part of the chicken.  (A technique that is also useful when roasting a turkey in the oven). 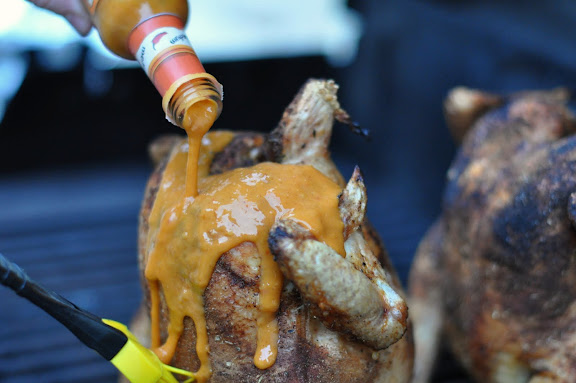 To mix it up a little, we decided to coat one of the chickens with Peri Peri sauce.  Peri Peri is spicy bbq sauce from Africa (which we actually discovered at a restaurant during a quick layover stay in London several years ago. We have since purchased it in some supermarkets or online).   It’s very spicy and a little bit goes a long way, but the flavor is amazing.  Slather the Peri Peri sauce on the chicken by pouring it over and spreading around with a grill brush. 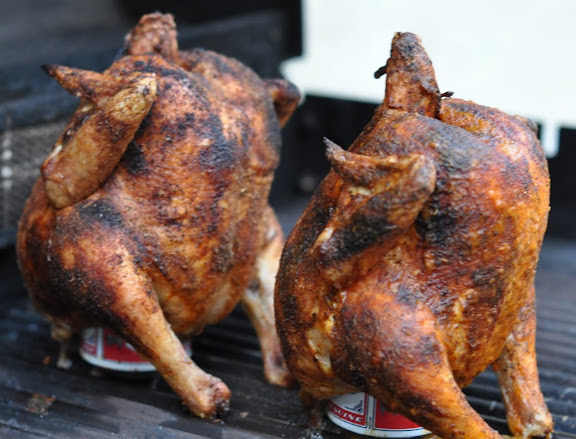 After an hour and fifteen minutes, the birds are done.  Both chickens were seasoned with Dan’s spice rub, but the chicken to the right also had the Peri Peri sauce applied.  Curiously, they look the same when they are done. 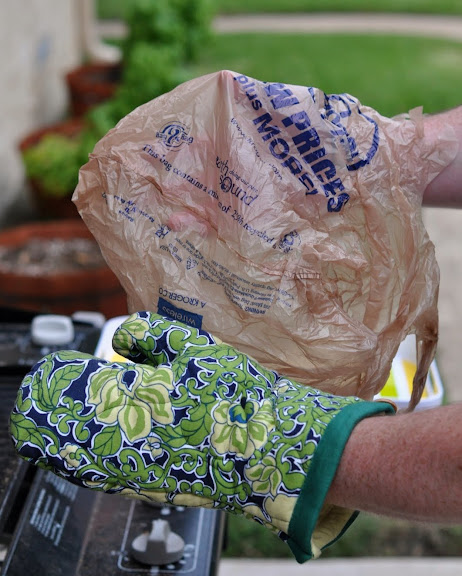 How do you remove a beer can filled with boiling hot beer from a grill-roasted chicken’s butt cavity?  Use an oven mitt to prevent second-degree burns on your hand, then place a plastic grocery bag over the mitt to prevent the oven mitt from being contaminated by chicken-beer-juice.  The above picture shows the mitt and the bag, before putting them together. 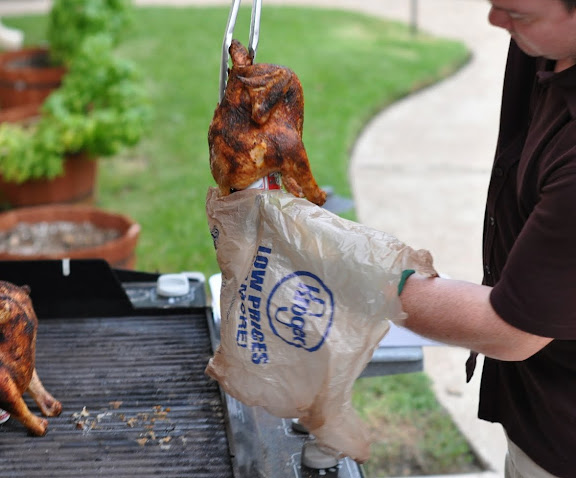 While holding the top of the chicken with tongs, gently remove the beer can from the chicken. 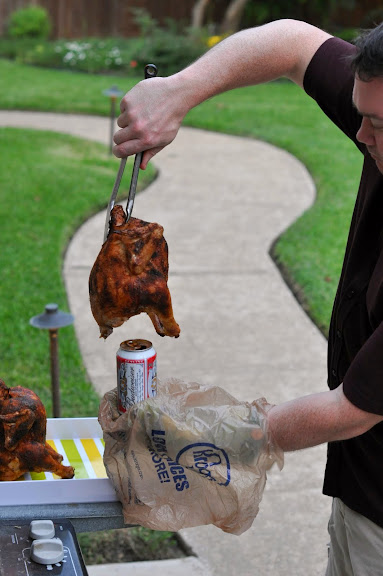 After removing the chicken, set it on a nearby tray.  Be careful with the beer can because it will be half full of very hot liquid.  A good way to safely dispose of it is to place the beer can back on the grill — which has been turned off — and let it cool down before putting it in the trash.  Sometimes you may forget that the can is out there until the next time you go to use your grill, so it definitely will be cool enough to throw out at that point.  Pretty sure the beer cans from our dinner this weekend are still on our grill as I type this. 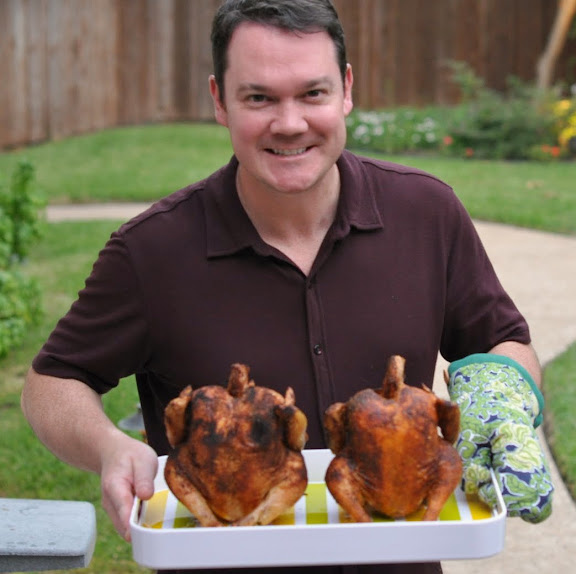 A happy boy with his grilled chickens.  Allow the chicken to rest approximately 5 to 10 minutes before carving and serving.

1 thought on “Beer Can Chicken”