We love game hen.  They are inexpensive and the perfect size for the two of us.  This recipe involves flattening the game hen, then grilling it while basting with a mop of vinegar, sliced onions, jalepeno and spices.  The game hen finishes on the grill with the onions on top. 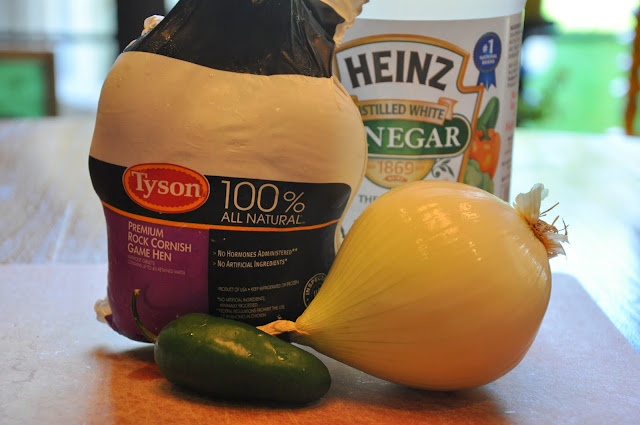 Ingredients.  We usually buy frozen game hen (comes in packs of two at our grocery store), so we almost always have one in the freezer.  Thaw it for at least 24 hours before you want to use it.

Slice the jalepenos into rings. 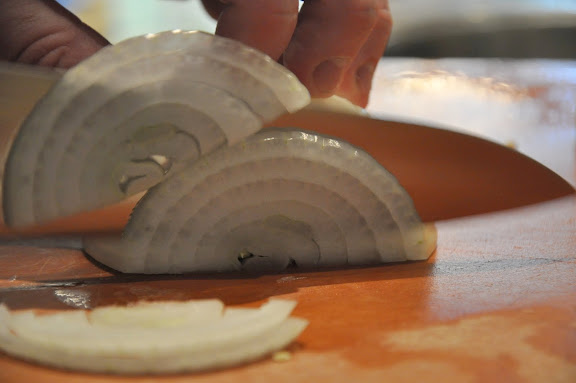 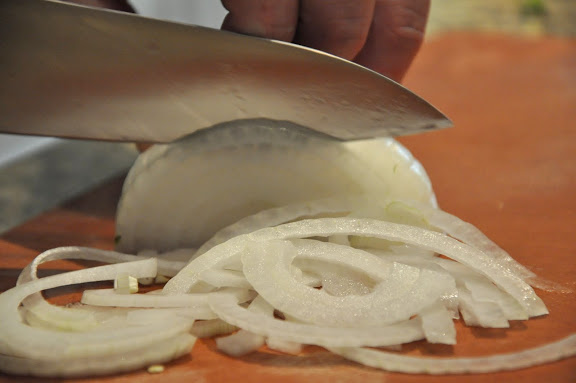 Cut the onions into half-moon pieces.  The onions get brown and a little crispy in the vinegar when you grill them and the hen – yum! 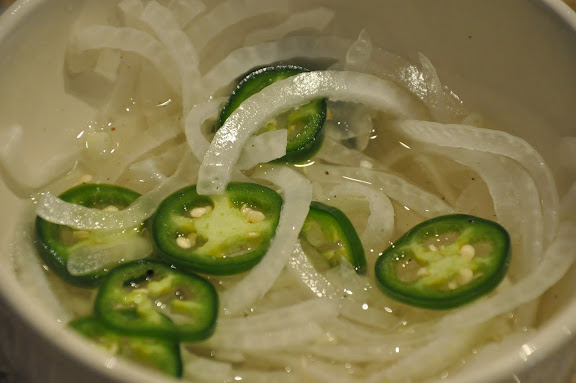 The onion, jalepeno, vinegar and salt and pepper mixture is ready.  Set it aside while you prepare the game hen. The game hen, waving hello, oblivious of what is about to happen. 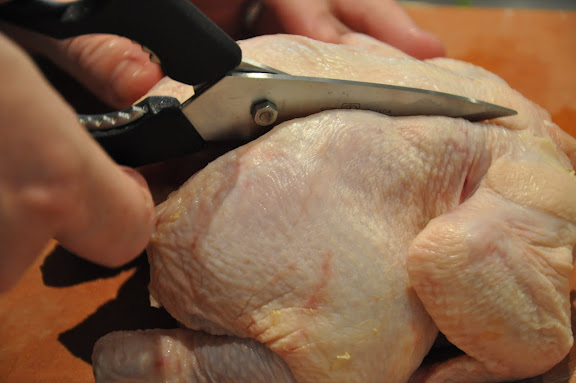 Using a good pair of kitchen shears, cut out the backbone (not for the faint of heart). 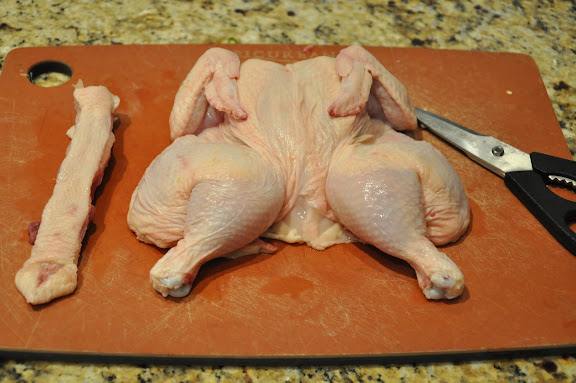 The game hen — flattened, with backbone (and dignity) removed.  After rinsing and patting dry, salt & pepper generously and it’s ready to grill. 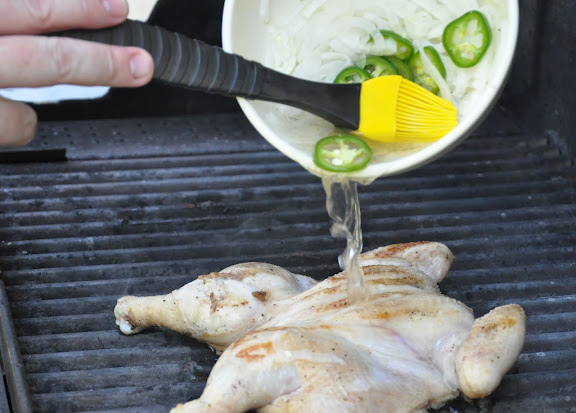 After the game hen has been basted with the vinegar, grilled and flipped a couple of times, pour over the rest of the vinegar and gently pile the onions and jalepenos on top, using tongs. 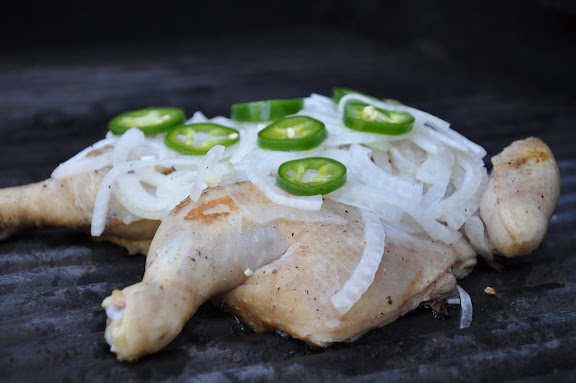 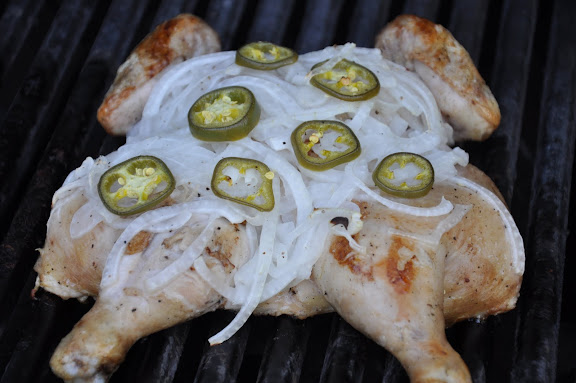 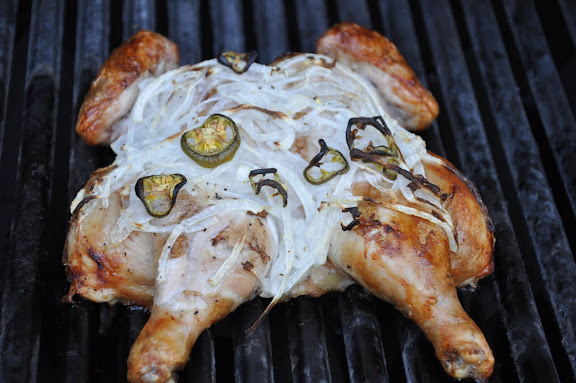 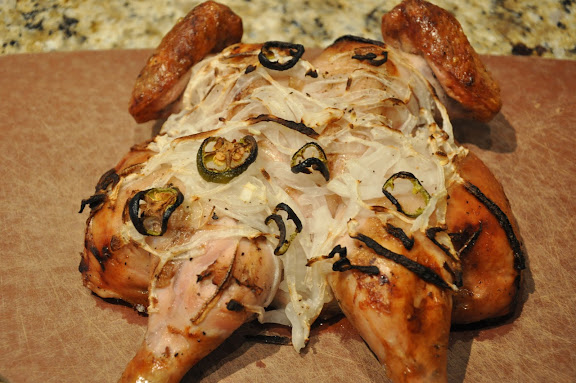 Done!  On this night, we served the game hen with broccolini and smashed potatoes.

Directions:
For the vinegar mop, add the vinegar, onion, jalapeno, pepper, and salt to a bowl and mix to combine.

Rinse the game hen under cold water and pat dry with paper towels.  With kitchen shears, cut along both sides of the backbone of the game hen, turn the game hen over so that it is breast side up, and then press on the breast and thighs to flatten the game hen.

Preheat your grill to medium heat.  When the grill is hot, clean off the grates well and spray on nonstick grill spray.  Add the game hen to the grill, breast-side up, baste with mop sauce, cover the grill, and cook for three minutes.  Turn the game hen over so that the breast side is down, and grill for approximately 5 minutes, covered, basting the game hen a few times.

Turn the game hen again so that the breast side facing up, baste one more time with the vinegar mop, and then using tongs, arrange the onions and peppers on top of the game hen.  Turn OFF the heat under the game hen, and then cook under indirect medium heat for 35-45 minutes, until the onions are nicely browned.

Remove from the grill, allow the game hen to rest for 5 minutes, and serve.