Here’s another one for vegetarians or anyone avoiding meat on Fridays during Lent.  Not being much of a vegetable eater, I wasn’t so sure I would enjoy a dish made with just pasta and veggies.  Turns out that with the right sauce and vegetables, I’m a fan.  We adapted this pasta primavera recipe by using veggies that we already know we like and beefing up the sauce (so to speak) with tomatoes.  We also left out the chicken called for in the original recipe, but adding some leftover cooked chicken if you’ve got it would be a welcome addition of protein.  This is an easy and flavorful dish with a creamy tomato sauce that has a hint of spice and complementary textures from the sauteed veggies and cooked pasta.  It’s worth a try with whatever veggies you happen to like for a relatively quick and healthy weeknight meal. 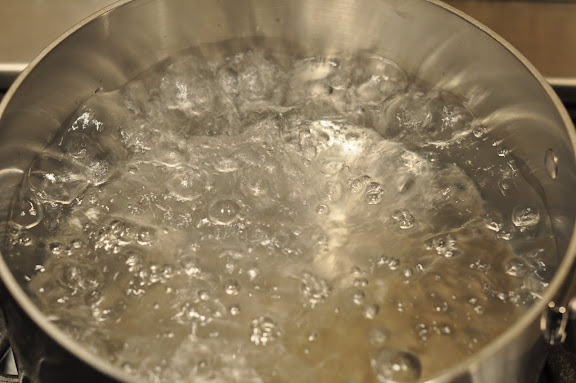 Prior to preparing the veggies, heat a pot of salted water to boiling for the pasta.  If the water boils before you are ready to cook the pasta, you can just turn it off, keep the pot covered, and it will re-heat quickly when you’re ready.  This is one of Dan’s favorite time-saving kitchen tips.  Similar to the way you preheat the oven, heating the water for the pasta at the beginning of your prep time will ensure that you’ll have that boiling water much quicker when it’s time to cook the pasta (or whatever you happen to be boiling.) 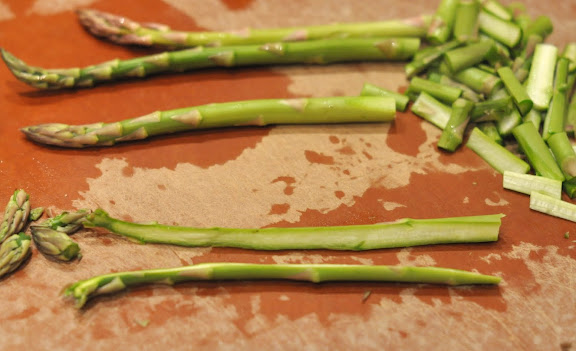 Prepare the asparagus by cutting off the tough end pieces.  As a matter of preference, we also cut off the very tips of the spears for this dish, so that the asparagus would have a similar texture to the peppers.  Slice the asparagus in half lengthwise, then crosswise into 1 inch pieces. 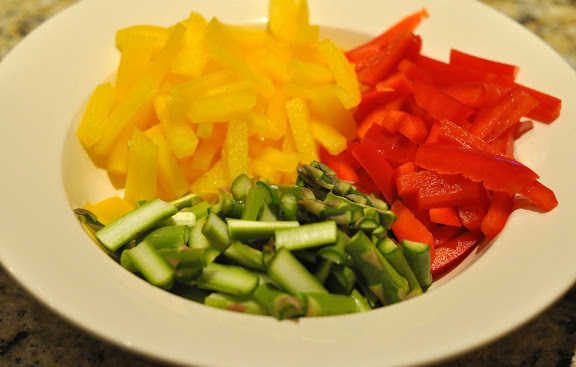 Cut out the cores and white rib parts of the red and yellow peppers and cut them into similarly-sized pieces as the asparagus. 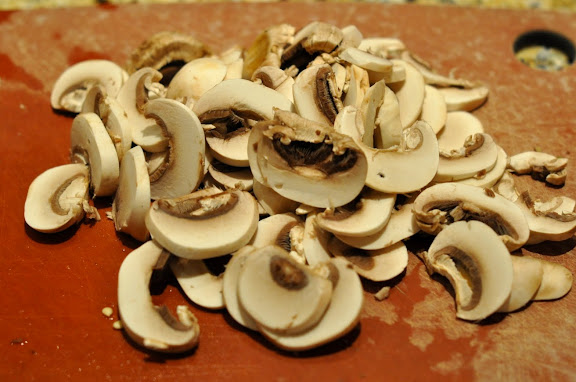 Slice up the mushrooms. 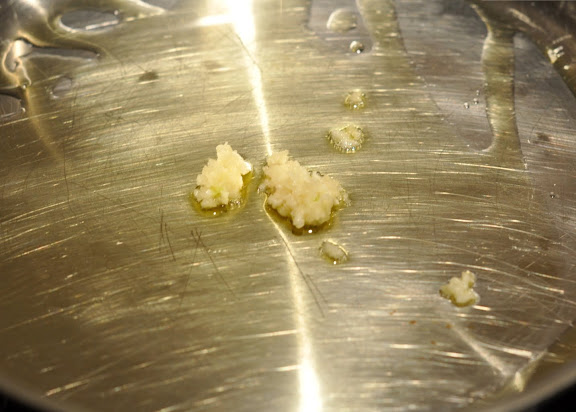 Heat a tablespoon of olive oil in a large skillet over medium-high heat, add the minced garlic and cook until fragrant — about 30 seconds. 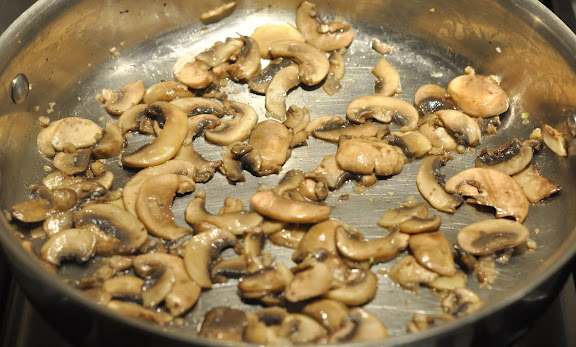 Add the mushrooms and cook until they release their juices and begin to brown — about 8-10 minutes. 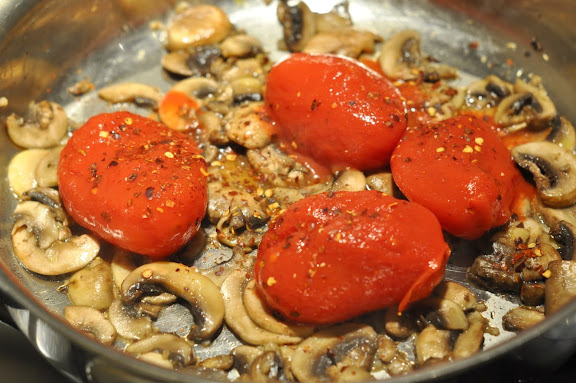 Add the whole tomatoes (without their juices) and red pepper flakes to the skillet and cook, stirring often to break up the tomatoes, until the tomatoes break down and the mixture reaches sauce consistency — about 10 minutes. 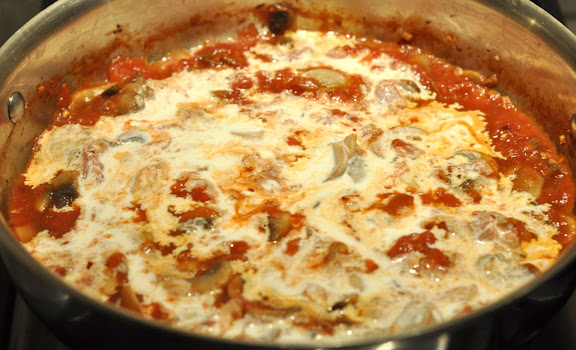 Add the cream to the sauce and simmer until it begins to thicken — about 5-7 minutes.  If you’re adding (pre-cooked) chicken to the dish, now would be a good time to add it to the sauce to heat it.  Once the sauce thickens, taste it and add salt and pepper as needed. 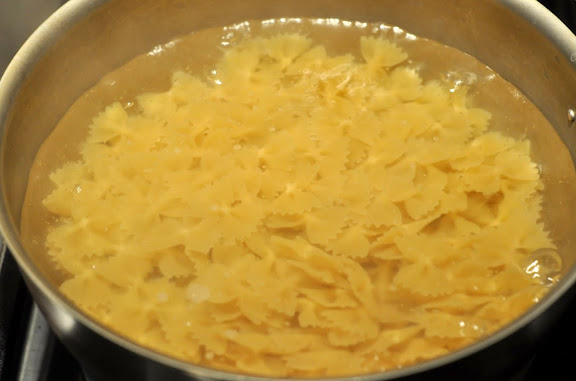 While the sauce cooks, boil the pasta according to the package directions.  Reserve some of the pasta water in case you want to thin out the finished sauce. While the pasta and sauce cook, heat a tablespoon of olive oil in a separate pan over medium-high heat and saute the veggies until they just begin to get tender — about 8-10 minutes.  Yes, this recipe uses a lot of pots/pans (one of Dan’s cooking pet peeves), but if you want the vegetables to retain a bit of their crisp texture, cooking them separately from the sauce is a necessary evil. 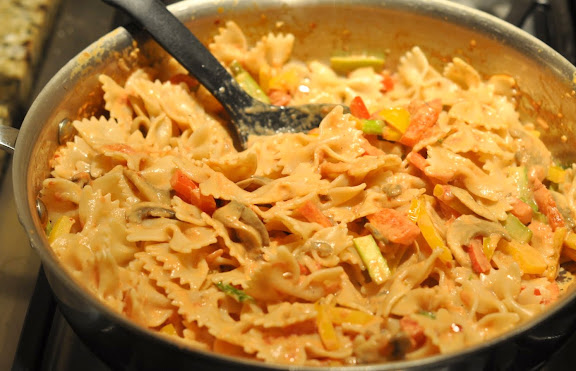 Add the veggies and pasta to the skillet with the sauce and stir it all together.  Add the veggies first, then the pasta in small batches so that the pasta-to-veggies ratio is not unbalanced with too much pasta. 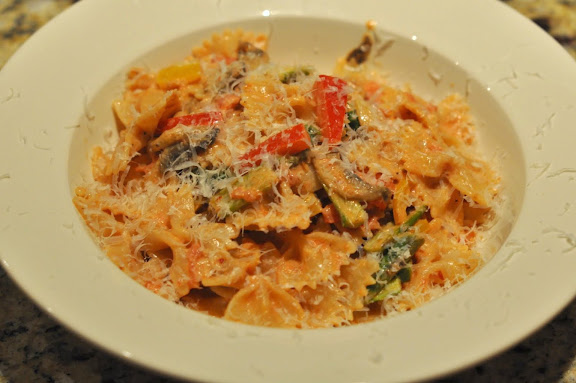 Garnish with grated Parmesan cheese and serve.  We like how the big bowtie pasta soaks up the delicious sauce and provides a softness against the lightly crisp vegetables — surprisingly sophisticated for “just pasta and veggies.”